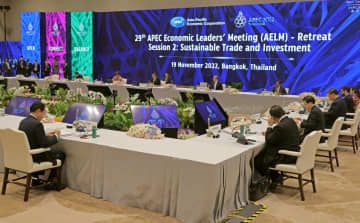 Leaders of 21 Pacific Rim economies will release a declaration after the end of their summit Saturday despite a rift over Russia's invasion of Ukraine, diplomatic sources said. The declaration, to be issued after the two-day Asia-Pacific Economic Cooperation forum summit in Bangkok, is expected to contain opposing views on Moscow's aggression, the sources said. While the United States, Japan and other APEC members have imposed sanctions on Russia, some other economies such as China have opted not to. A joint statement released Friday by APEC ministers said most members strongly condemned the w...
Click for full story