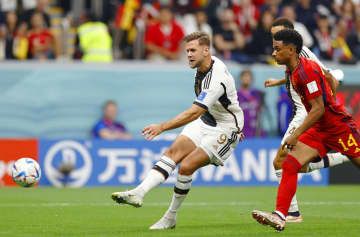 Spain and Germany drew 1-1 in their World Cup Group E encounter late Sunday in Qatar, meaning all four teams in the group still have a chance of progressing to the round of 16. Japan's loss to Costa Rica earlier the same day left them second in the group with three points, behind leaders Spain on four and ahead of Costa Rica on goal difference. Germany were fourth on one point. Japan face Spain on Thursday with a win by the Samurai Blue enough to put them through. If Japan and Spain draw, Germany can advance if they beat Costa Rica by two goals or more or win by a single goal and score more go...
Click for full story