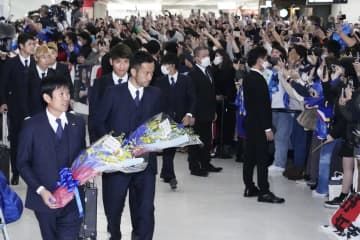 Japan's national team returned home Wednesday having surprised the world with group-stage wins over Germany and Spain in soccer's World Cup in Qatar, eventually exiting in the round of 16 on penalties to Croatia. Samurai Blue manager Hajime Moriyasu and captain Maya Yoshida alongside other players such as Ritsu Doan and Junya Ito were welcomed back by a huge crowd at Narita airport near Tokyo. Some of Japan's Europe-based players have returned to their clubs. "With individual skills and team effort, our players proved we can be competitive on the global stage," Moriyasu told a press conference...
Click for full story