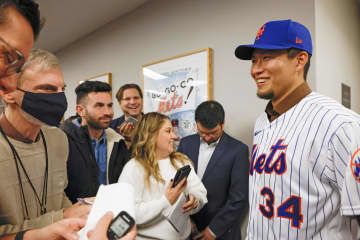 Newly acquired New York Mets right-hander Kodai Senga said Monday he has yet to determine whether he will play for Japan at the upcoming World Baseball Classic. The former SoftBank Hawks ace, who has inked a five-year deal with the Mets, said his participation in the March 8-21 tournament would most likely be limited in any case because it overlaps with MLB spring training. A gold medalist with Japan at last year's Tokyo Olympics, Senga said he wanted to contribute to the WBC campaign but was also concerned about pushing out other players with his late arrival. The 29-year-old said he had been...
Click for full story