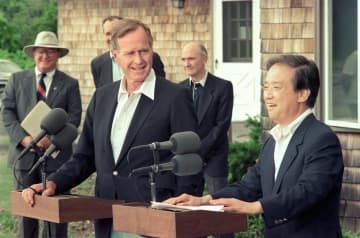 Japan did not reveal exchanges between its prime minister and the U.S. president in July 1991 on converting the Asian country's nontariff rice import barriers to tariffs, according to a Japanese diplomatic document declassified Wednesday. Then Prime Minister Toshiki Kaifu talked with U.S. President George H.W. Bush in the United States, at a time when Japanese lawmakers backed by the farm sector opposed tariffication as it would lead to the opening of the nation's rice market. Kaifu, whose position was fragile within the ruling Liberal Democratic Party, was apparently worried about a backlash ...
Click for full story