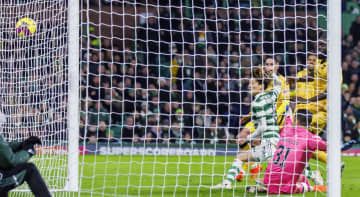 Kyogo Furuhashi hit the winner as Celtic beat Livingston 2-1 at home on Wednesday to stay nine points clear at the top of the Scottish Premiership. Celtic led through a 23rd-minute own goal and Furuhashi, who was not included in Japan's World Cup squad in Qatar, doubled the lead in the 45th minute when he diverted home Liel Abada's low right-wing cross from point-blank range. Nicky Devlin halved the deficit two minutes into first-half stoppage time, but Celtic held on to the lead after the break at Parkhead. Reo Hatate came off in the 64th minute and Furuhashi eight minutes from time, while Da...
Click for full story