Soccer: Mitoma scores for Brighton in loss to Arsenal 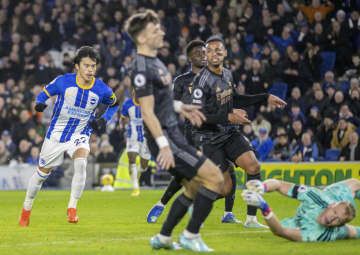 Brighton's Kaoru Mitoma netted his second English Premier League goal of the season Saturday in a 4-2 loss to a visiting Arsenal side featuring Samurai Blue World Cup teammate Takehiro Tomiyasu. With his team trailing 3-0, Mitoma reduced the deficit in the 65th minute at Amex Stadium when he controlled a pass from Pascal Gross and calmly finished past Arsenal keeper Aaron Ramsdale. "I kept my cool. I was able to strike it with my right foot the way I had pictured before I got the ball," said Mitoma, who starred for Japan at the recent World Cup in Qatar. Mitoma played all 90 minutes after star...
Click for full story