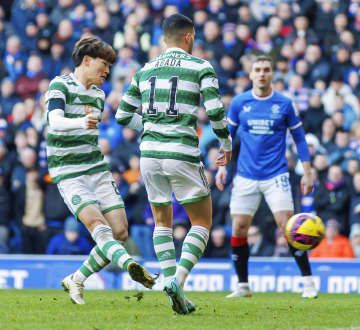 Japanese forwards Daizen Maeda and Kyogo Furuhashi both scored Monday as leaders Celtic salvaged a 2-2 draw at Rangers in the Scottish Premiership. Maeda, who made his World Cup debut in Qatar, opened the scoring five minutes into the match with his fifth goal of the season. Furuhashi's 88th-minute equalizer, his 15th goal of the season, earned Celtic a point at Ibrox Stadium in Glasgow. Second-placed Rangers drew level at 1-1 through Ryan Kent in the 47th minute before James Tavernier put the home side in front six minutes later from the penalty spot.
Click for full story