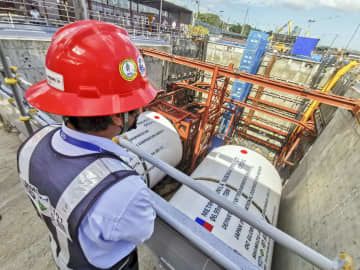 Construction of the first-ever subway in the Philippines undertaken with Japanese aid began on Monday, in a move to pave the way for easing road congestion in overcrowded Manila.

Leading the start of underground drilling work for the subway, which could start operating in 2028, President Ferdinand Marcos Jr. pushed the button of one of the two tunnel drilling machines brought in from Japan that were on display.

In a speech during a ceremony, Marcos thanked Japan for its support in key infrastructure projects of the Philippines. “These tunnel drilling machines highlight Japan’s expertise and te...