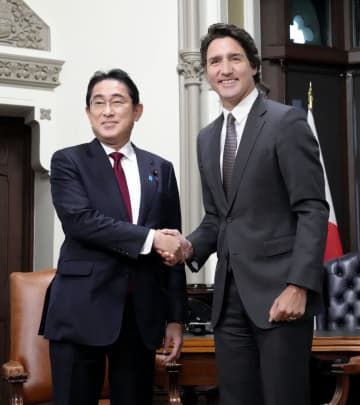 Japan’s Prime Minister Fumio Kishida and his Canadian counterpart Justin Trudeau agreed Thursday that the two countries will bolster security cooperation with an eye on China’s increasing military assertiveness in the Indo-Pacific region.

During their meeting in Ottawa, Trudeau also told Kishida that Canada will provide full support for the success of the Group of Seven summit scheduled for May in Hiroshima, according to the Japanese Foreign Ministry.

The ministry quoted Kishida as telling Trudeau that at the gathering in the western Japan city devastated by a U.S. atomic bombing in August 194...