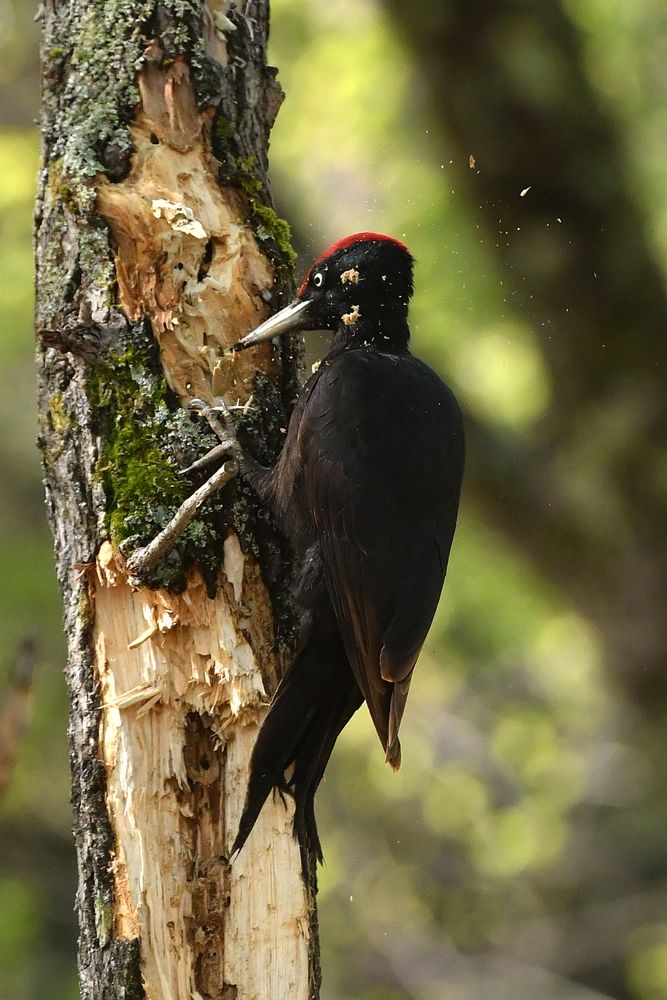 A black woodpecker, a protected species in Japan that lives in the mountain forests around Kamishihoro, Hokkaidō, was spotted along a public roadway near the town on May 31, 2021.

A journalist spotted the bird—called kumagera in Japanese—in a tree along the side of the road while driving by early in the morning on that day. The woodpecker moved from one tree to another, hunting for insects as it vigorously chipped away at the rotted-out wood. Afterward it disappeared into the new greenery of the birch forest.

With a body length of close to 45 centimeters, the kumagera is the largest woodpecker species in Japan. Its body is almost entirely black like a crow, except for a patch of red feathers on its crown. In the Tokachi region, the black woodpecker lives in mountain areas, such as Higashitaisetsu and the Hidaka Mountains, and raises chicks as a pair during the breeding season from May to June. It can also be seen in flatland areas in the nonbreeding season of autumn.

Murose Akihiro, head of the Tokachi branch of the Wild Bird Society of Japan, explains the significance of the sighting: “We don’t get to see one very often, since they’re few in number and their territory covers a wide area of 300 to 500 hectares per bird.”

(Originally published in Japanese on Kyōdoshi.com on June 1, 2021. Translated and edited by Nippon.com. Banner photo: A black woodpecker chips away at a rotting tree as it hunts for insects in the wood. All photos © Tokachi Mainichi Shimbun.)