Green Skies at Night: A Mystical Gift from Amami Ōshima 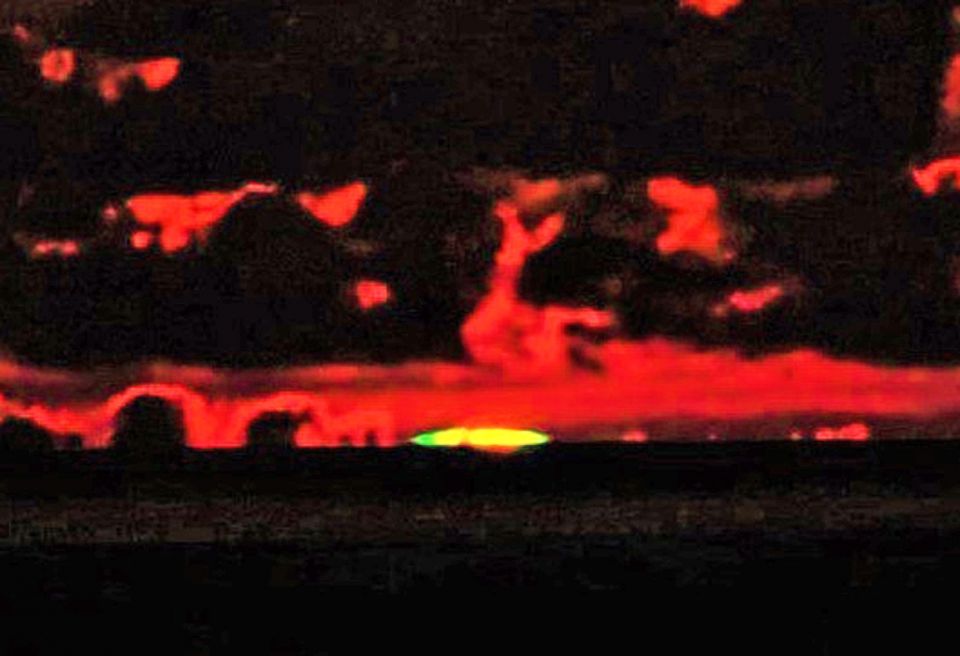 A green flash emerges on the western horizon, viewed from Naze, Amami, in Kagoshima Prefecture, at around 6:50 pm on August 26. (© Yoshiyuki Hidekazu)

A rare meteorological phenomenon known as the green flash appeared in the sky west of the island of Amami Ōshima, Kagoshima Prefecture, on August 26. A brief moment before sunset, photographer Yoshiyuki Hidekazu captured the green flash at Daikuma Observatory, a scenic lookout point in the Naze district of Amami. There is a saying that seeing the green flash will bring good luck. He wanted to bring joy to a world now suffering from the pandemic by sharing the extraordinary view.

The green flash is a natural phenomenon in which the rim of the sun appears green in color due to a combination of various conditions around sunrise or sunset. It is limited to days when the air is clear and no clouds obscure the low horizon. Views of the flash are elusive since it is unpredictable and usually lasts for only a few seconds at most.

Yoshiyuki is one of many photographers who pursue the green flash, hoping to capture images of it. This year, he struggled to photograph it since the conditions were not favorable. However, a chance came to him all of a sudden in late August when he saw a small opening between the clouds and the ocean horizon as he was heading back home.

With excitement, he rushed to the observatory and waited for the sun to sink. Just as he expected, a flash of beautiful green color unfolded before his eyes at around 6:50 pm.

His face is filled with happiness as he expresses his satisfaction with his first successful shot of the year: “I want to share my pleasure with as many people as possible. I hope it makes you feel happy.”

(Originally published in Japanese on Kyōdoshi.com on August 29, 2021. Translated by Yamamoto Riko as part of an internship program with Ritsumeikan University and edited by Nippon.com.)