Dewa Sanzan Celebrates Festival of Wishes from All Across Japan

On the night of August 31, the Hassaku festival was held at the summit of Mount Haguro, located in the middle of Yamagata Prefecture.

Dewa Sanzan is a collective name for three sacred mountains: Haguro, Gassan, and Yudono in Dewa, the old province name for the northwestern Tōhoku area. Each mountain has a shrine connected with Shugendō, a syncretic religion of ancient Buddhism and Shintō mainly worshipping mountains. These are known as the Dewa Sanzan shrines, and Mount Haguro has a special shrine dedicated to all the gods revered at the three locations at its summit. 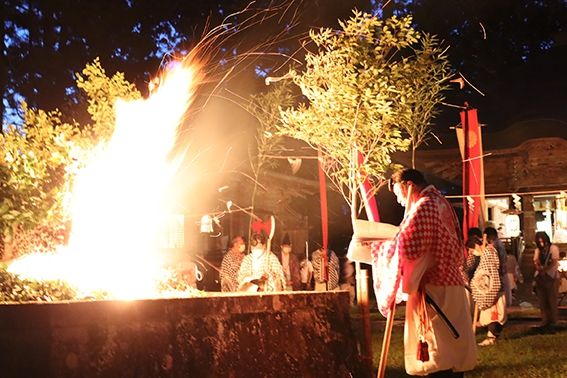 A priest intones prayers before a sacred fire, relaying wishes received from across Japan to the local deities. (© Shōnai Nippō)

The Hassaku festival is held to conclude Aki no Mine, their special asceticism event for the ascetic adherents called yamabushi in late August to early September every year. Yamabushi who completed their ascetic rites in the mountains light a goma sacred fire before the Hachiko shrine at the mountaintop as part of the festival.

The season is a very crucial time for crops like rice to grow well. The festival prays for the healthy growth of crops without any damage from typhoons or other severe weather. Due to the COVID-19 pandemic, visitors were not allowed to attend the festival in 2020. This year, too, only the priests attended the festival, praying on behalf of the adherents.

At 6:00 pm on the festival day, Miyano Naoi, the chief priest of the Dewa Sanzan shrines, made a ritual prayer wishing for plentiful harvests and the early end of the pandemic.

Afterward, the priests made prayers in front of the sacred fire on behalf of followers across Japan wishing for individual and family well-being, good business outcomes, road safety, and so on.

As summer gradually moves toward fall, the priests at the Dewa Sanzan shrines pray quietly in front of the sacred fire under the chilly night sky at the summit of Mount Haguro.

(Originally published in Japanese on Kyōdoshi.com on September 1, 2021. Translated by Inagaki Risa as part of an internship program with Ritsumeikan University and edited by Nippon.com.)