Sashimi in the Sky: Drone Transports Fresh Bonito Directly from the Port 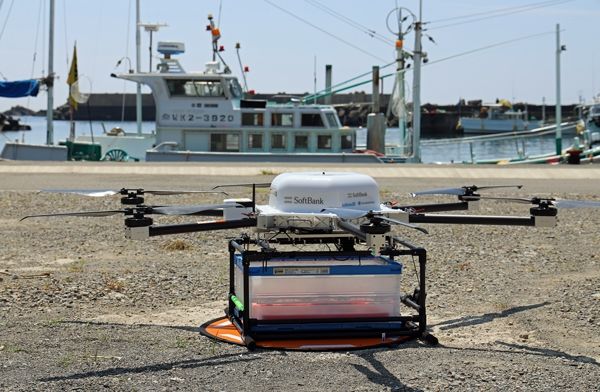 A drone takes off from Wakayama Prefecture’s Mirozu port, carrying a freshly caught fish to a restaurant some kilometers away. (Courtesy SoftBank Corp.)

Japanese telecommunications giant SoftBank Corp. on September 1 conducted a test of a drone system in Susami, Wakayama, south of Osaka in the Kansai region, to transport a bonito from a fishing port to a restaurant at the Susami michi no eki, a roadside rest stop. The drone was able to precisely land in the designated location after flying about 3 kilometers automatically. Staff members ate fresh, delicious bonito and have realized the future potential of the latest drone technology.

This project was intended to resolve labor shortages in the transportation industry and to deliver locally landed bonitos when the fish market is closed. Tokyo-based IT firm Uhuru and Eams Robotics, an industrial drone manufacturer, also supported this project.

The fish was carried by a six-rotor drone with a total length of 2.3 meters. The flight from Mirozu port, located on the southern Wakayama coast, to the Susami michi no eki took 10 minutes and was able to precisely fly the programmed route. The transported bonito had been caught the same day, and was 55 centimeters in length and 3.5 kilograms in weight. The fish was prepared as sashimi at Susami Yoichi, a seafood restaurant in the facility, and enjoyed by the staff members involved in this project.

Susami Mayor Iwata Tsutomu, who observed the test, commented: “I felt huge potential in this technology. Although it was only a fish that has been transported this time, drones can also transport other products or items, and can be further used in a natural disaster or other emergency. Also, it can help promote the development of communities where people can feel secure wherever they choose to live.”

(Originally published in Japanese on Kyōdoshi.com on September 2, 2021. Translated by Aikawa Kōki as part of an internship program with Ritsumeikan University and edited by Nippon.com.)