Sports Oct 14, 2019
Japan’s historic victory over Scotland won it a perfect 4–0 record in pool play, sending it through to the quarterfinal round. What did the players think about their win and their prospects going forward? A look at their thoughts shared on social media.

Victorious Start for a New Era in Japanese Rugby

On October 13, before 67,666 fans at International Stadium Yokohama, the Brave Blossoms—Japan’s national rugby team—defeated powerful rival Scotland 28–21. When the final whistle blew on the match, it brought an end to 80 minutes of thrilling rugby and nonstop cheers of “Nippon!” from the home crowd. It also knocked Scotland out of the tournament and sent Japan on to the quarterfinal round, making up for the humiliation the Japanese squad faced in the 2015 tournament, when a 3–1 record in the pool round was not enough to send them through.

Following the game, Captain Michael Leitch and the other members of the Brave Blossoms celebrated the country’s first-ever trip to the Rugby World Cup knockout round, a new chapter in the history of the sport in Japan. In addition to standing for a seemingly ceaseless stream of postgame interviews, they took to Twitter and Instagram to share their excitement at the win—and to express their hopes that the win, and their efforts in the match to come, would bring courage to people reeling from the blow of Typhoon Hagibis, which had smashed a destructive course through much of eastern Japan on October 12. 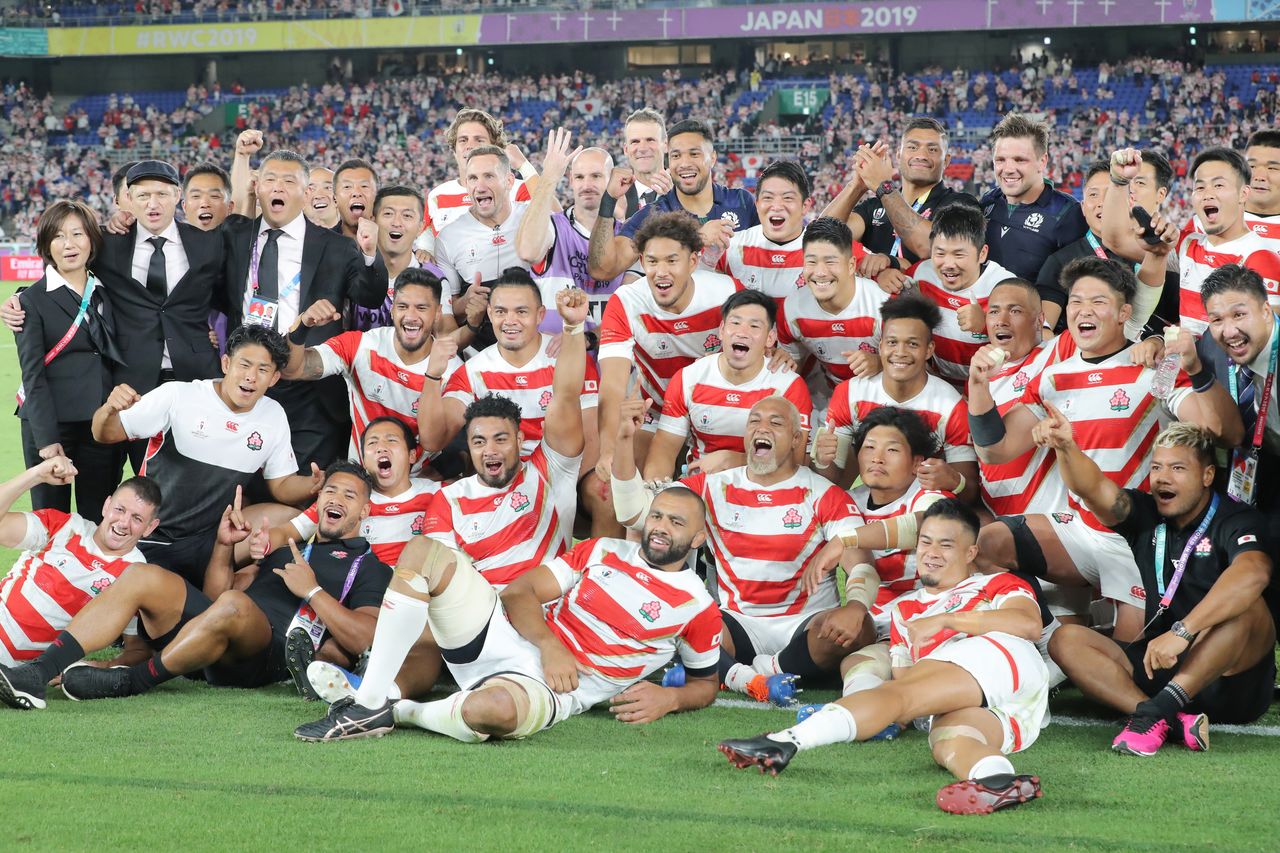 Immediately after the game, 27-year-old wing Fukuoka Kenki was brought before the TV cameras for his player-of-the-match interview. In his first starting appearance this tournament, he scored two tries, more than living up to the confidence the team’s head coach, Jamie Joseph, had shown in him. “My goal was to play in a way that gave momentum to the whole team,” Fukuoka stated, “and I’m so glad that I was able to do that. We wanted to beat this great rival and make it to the best eight, creating new history for our team. It feels amazing!” In the upcoming October 20 quarterfinal match against South Africa, he went on proudly, “we want to call again on everything we’ve accomplished to date and extend that history even further.”

Later in the evening, on Twitter, he drove the point home once more: “This is a new stage in the history of Japan rugby! Thanks so much to you all for your support!”

As Fukuoka noted, Scotland had long been a dangerous opponent capable of puncturing Japanese hopes of advancement. The teams had met three times in previous World Cup play, with Japan coming up short every time. At the 2015 tournament, despite wresting a historic victory away from tournament favorite South Africa and ending the pool stage with three wins, Japan lost to Scotland in a 45–10 drubbing that prevented the Brave Blossoms from advancing to the knockout stage. That history made this year’s win over the rivals all the sweeter.

A Win to Encourage Those Who Need Courage Now

The Japanese players faced a ferocious Scotland defense, but managed to keep their plays running with the offloads, passes made while being tackled, that they had practiced relentlessly in preparation for the tournament. One play that epitomized the “One Team” slogan driving the Japanese squad forward together came 25 minutes into the first half, when prop Inagaki Keita scored a try to put Japan in the lead for the first time. Inagaki has been on the national team for seven years, but this was his first try. 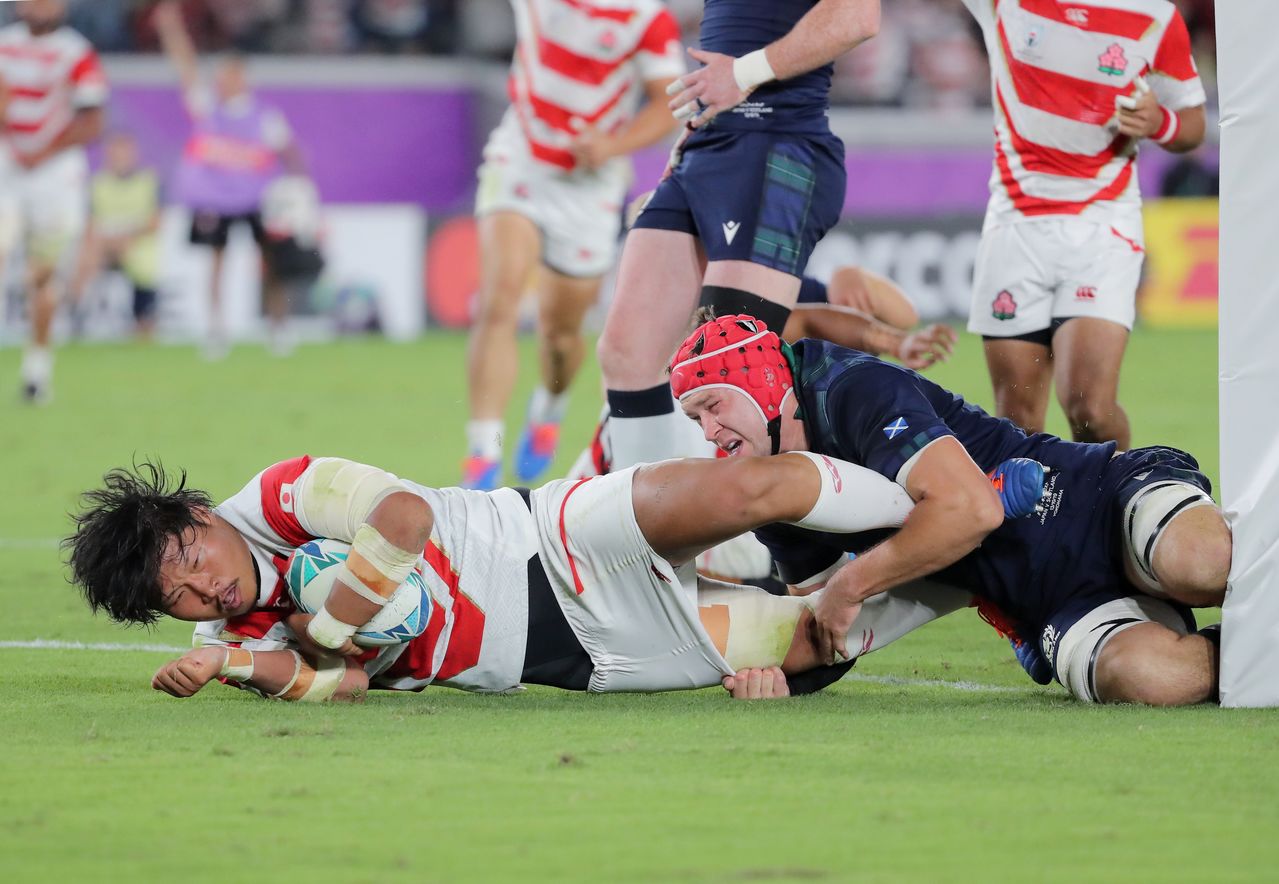 Inagaki Keita puts Japan up 12–7 with his first-half try against Scotland. (© Jiji)

Famed as “a man who never smiles,” he stayed true to form in his postgame interview, maintaining a straight face as he spoke: “Everyone connected their passes perfectly and got the ball to me so I could score the best possible try on the best possible stage. We took the field today in the hope that rugby could bring some cheer to those who were hit hard by the typhoon.”

In his tweet after the match, he continued in the same vein, looking ahead to the upcoming South Africa contest: “We made history today. The next challenge we face begins now. Let’s bring smiles to the face of a Japan that’s suffered such damage in the typhoon.”

Meanwhile, another hero of the day—number eight forward Himeno Kazuki, who turned a dangerous moment into an opportunity for Japan with his “jackal” steal, snatching the ball from a still-standing opponent—spoke to reporters after the win. “I’m totally ecstatic. There are no other words for it. We faced some tough moments in the game, but until the very end, until that whistle blew, each and every one of us showed the hard work that won us the match in the end. I’m proud of my teammates.”

Tanaka Fumiaki, who substituted for Nagare Yutaka in the scrum-half position in the second half, gave his view of the game after it ended: “In the first half Japan was pretty much able to play as it pleased, but in the second half Scotland showed what it was made of. We were forced back onto our defensive foot, but we held firm against them.”

Wing Matsushima Kōtarō tied the tournament record so far with his fifth try when he put Japan on the scoreboard for the first time in the match at minute 17 in the first half. After the game, he took to Twitter to enthuse: “We had the deeds to match our words! Japan is in a tough situation now with this typhoon, but we were able to do our very best! Let’s all make it through this together! What a day!!!”

Center Nakamura Ryōto’s Twitter feed featured this message: “We’ve made it past plenty of challenges so far. We’ve got to bring courage to all of Japan . . . that was in our minds as we manned the defensive line today.”

And Hendrik Tui, who substituted for Michael Leitch toward the end of the match and helped mount the heroic defensive stand that kept Scotland from equalizing, kept the team’s coaching and support staff in mind when he tweeted late on Sunday night: “The coaches were all telling themselves the same thing today. That we were fighting for our families. Fighting for those who lost loved ones in the storm. Fighting as hard as we could with them in our minds at all times. Today we fight for everyone in Japan!”

Eyes on the Next Prize

On October 20, Tokyo Stadium in Chōfu will host the quarterfinal match between Japan and South Africa, a powerhouse team itching for revenge against a Japanese side that beat it in the tournament four years ago. This figures to be an even tougher matchup than this weekend’s Scotland game, but Himeno Kazuki was upbeat in his postgame media appearance, stating “I feel that we have a real chance to win, and Japan is playing with confidence.” Later, on Twitter, he went on: “We made history anew! Much gratitude to all our fans for fighting at our side when times were tough, and for cheering us on all the way! I’m proud of my teammates for keeping their bodies on the line no matter how rough things get. We’ve got our eyes on the World Cup, and we’ll do our best next week!”

A day after the match, on October 14, Nagare Yutaka opened up to Twitter with a story showing what the game is all about to those who play it. After the match, he was exchanging shirts with Scotland captain Greig Laidlaw. As he tells it: “We were in the locker rooms after the game, trading jerseys. He told me, ‘Really, congratulations to you guys. You can beat South Africa. Go for it!’ He’s such a gentleman—such a player to look up to. I’m so lucky to have been able to share the field with a great player like him.”

Scotland and Japan had played a brutally physical match, almost scrapping with each other at times. But the “no-side spirit” of rugby—the way opponents come together as friends once the final whistle blows—comes through loud and clear in this tweet, with its photo of a cherished gift from a treasured companion on the field.