Politics Dec 2, 2019
In a year filled with shocking news out of Hong Kong, the city has provided one more surprise to the world: a sweeping victory for prodemocracy candidates in the November 24 district council elections. The “one country, two systems” Hong Kong model has held sway since the territory’s 1997 reversion to Chinese rule, but appears to be facing a crisis today.

A Referendum on the Popular Will

The members who serve in Hong Kong’s 18 district councils are democratically elected and receive a monthly paycheck for their service in the bodies. This does not make them full governmental representatives of their districts, however; their role is largely to serve the Hong Kong government in an advisory capacity, and they have no power to set local policy, like the municipal assemblies in Tokyo. Indeed, these councils have their roots in the era of British rule over the territory, when they were established as a means of gauging the popular will at a time when the colony’s rulers had no intention of giving its residents true political rights. Following the 1997 reversion to Chinese rule, these bodies remained in place.

The district council elections held on November 24, 2019, were far more important than this role suggests, though. The protests touched off in June the same year in opposition to proposed legislation that would allow extradition of Hong Kong residents to China for trial. They grew in scale over the months that followed, flaring up week by week, reaching a new level just before the elections with the police siege of Hong Kong Polytechnic University, where protesting students had barricaded themselves in to avoid arrest. It appears that many saw the district council contests as the perfect way to register the popular will in a clear, objective manner.

The Hong Kong government and pro-Beijing forces in the territory have insisted that the clashes between young protestors and the police represent rioting by an out-of-control handful of agitators, while the majority of the populace are against the disruption to Hong Kong’s economy and living conditions. Local media organs have been gauging popular views through opinion polls, but the results of these surveys shift strongly depending on whether they were carried out by prodemocracy or pro-Beijing outlets. It has been difficult, therefore, to get an accurate bead on the true state of popular opinion in the territory.

The district council elections, coming around half a year after the protests began, thus became a bellwether indicator of this opinion. They are the only democratic exercise in Hong Kong giving one vote to each adult resident, effectively making them a referendum on the current state of affairs.

Saying No to Beijing

The results of this referendum were made clear by an overwhelming victory for prodemocracy candidates, described at turns as “a tsunami” and “historic” in  local news headlines. The voter split in the territory has traditionally been estimated at around 6 prodemocracy votes to every 4 pro-Beijing votes. The district contests revolve around single-seat constituencies, making the close to 90% of seats taken by prodemocracy candidates especially stark; despite this, the Chinese government and pro-China voices in Hong Kong continue to state that the fundamental 6:4 split in the territory’s political views remains unchanged.

One key factor in the electoral landslide this time around was the high voter turnout. Previous district council elections saw less than half of voters go to the polls, but in 2019 this figure was above 70%. Earlier contests saw pro-China candidates have an easier time of it thanks to their organizational backing that could drive supporters to voting booths. This year, though, latent support for Hong Kong democracy drove much higher voting among the opposition. As one Hong Kong newspaper put it, this was the outcome of an election that gave people a chance to say no to Beijing at the ballot box.

As noted above, the district councils have little political authority. However, of the 1,200 electors who vote to select the chief executive of Hong Kong, 117 come from among the district council membership. Most of these electoral college posts are now likely to be filled by prodemocracy voters, pushing their representation there from some 340 up to around 450 of the total. This remains far from a majority of the 1,200 electors, but it is certainly enough to make its impact felt in the selection of the chief executive. For the Chinese government, which will certainly never allow a prodemocracy leader to occupy the chief executive’s office, this is an issue of considerable political significance. 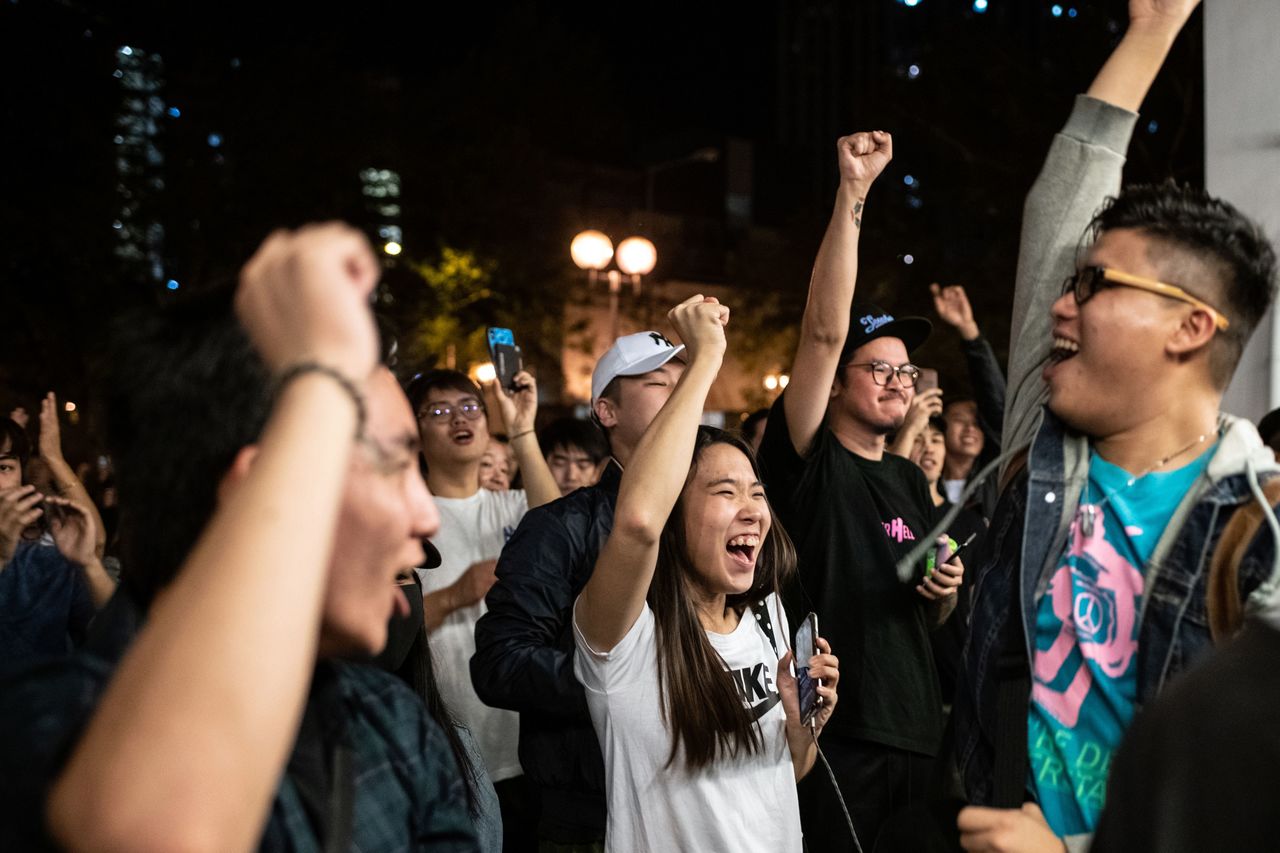 In the early hours of November 25, 2019, supporters cheer the landslide victory of prodemocracy candidates in Hong Kong district council elections on the previous day. (© AFP/Aflo)

Shaking the Foundations of the Hong Kong System

Participants in this year’s protests presented five demands that had to be met for the demonstrations to end, including full withdrawal of the extradition bill, formal inquiries into police brutality, a retraction of the classification of protestors as “rioters,” and an amnesty for arrested protestors. The fifth demand, one that has been made by prodemocracy forces in the past as well, is for universal suffrage and real elections to choose all members of the Legislative Council as well as the chief executive of Hong Kong. The LegCo has no authority to select or dismiss the chief executive, giving the latter unassailable power in the territory. At the same time, the chief executive functions as a pipeline channeling the will of the Beijing government into the society of the territory. The 1,200 electors who choose the chief also include the 70 members of the LegCo, so it is likely that the forces who came out ahead in this year’s district council contests will try to keep the momentum going toward the next legislative election, slated for the autumn of 2020, in order to carve out more of a say there.

The crushing victory for prodemocracy forces in the November district council elections also means that if the Hong Kong government does not respond favorably to their demands, it will be turning its back on the popular will, undermining its own ruling legitimacy. Observers are watching in particular to see whether the government will agree to establish a commission to investigate police brutality during the protests; its willingness to approach the protestors’ position in this way will be a litmus test of its responsiveness to the public. It is unclear whether this alone would be enough to quell the ongoing demonstrations, but the establishment of such a commission could also lead to fulfillment of another demand, that for an amnesty for arrested protestors.

Ominously, the Chinese government continues to press for further arrests on charges including rioting in the belief that a harsh response will undermine the demonstrators’ position.

But the district council elections made it evident that Hong Kong’s society is taking an unforgiving view of the Hong Kong government and police, along with the central Chinese government that stands behind them. The shock to the pro-China forces in the territory has been especially severe. Having lost more than 240 of the 331 seats they held before the district council elections, the local pro-Beijing representatives are standing on shaky ground indeed. In the lead-up to next year’s LegCo election, we may even see some of them jump ship for a promising prodemocracy side. This in turn could bring fresh instability to Beijing’s “one country, two systems” model ensuring its indirect rule over the territory via pro-China Hong Kong citizens.

The November 2019 election results have made Beijing, along with the rest of the world, acutely aware of the crisis that faces the “one country, two systems” approach. Whether the Chinese government chooses to disregard or to accept the district council election drubbing, it may find that this approach no longer functions as it once did. Beijing faces a difficult situation today, and it is one that may become still more complex as the full outcomes of the election unfold. The flip side of this coin is that it may also provide one last chance for the central government in Beijing and the Hong Kong government to approach the positions of the prodemocracy camp and reach some sort of reconciliation.