Politics Jan 7, 2020
The January 11, 2020, presidential election in Taiwan is rapidly approaching. Tsai Ing-wen of the Democratic Progressive Party, the incumbent, seems likely to be reelected. But a clear Kuomintang victory in the November 2018 local elections led most people to expect that the KMT would regain control of the executive branch in this year’s contest. To unravel the political threads, we must look to Hong Kong.

A Commanding Lead for Tsai

Opinion polls across the board in Taiwan show that the Democratic Progressive Party’s President Tsai Ing-wen is leading by an overwhelming margin against Han Kuo-yu, the candidate of the Kuomintang (KMT, also known as the Chinese National Party) and mayor of Kaohsiung. In response to a December 11 poll conducted by the Taiwanese TV channel TVBS on what candidate people would support if the election were held tomorrow, 50% expressed support for Tsai, 31% for Han, and 6% for Soong Chu-yu of the People First Party. 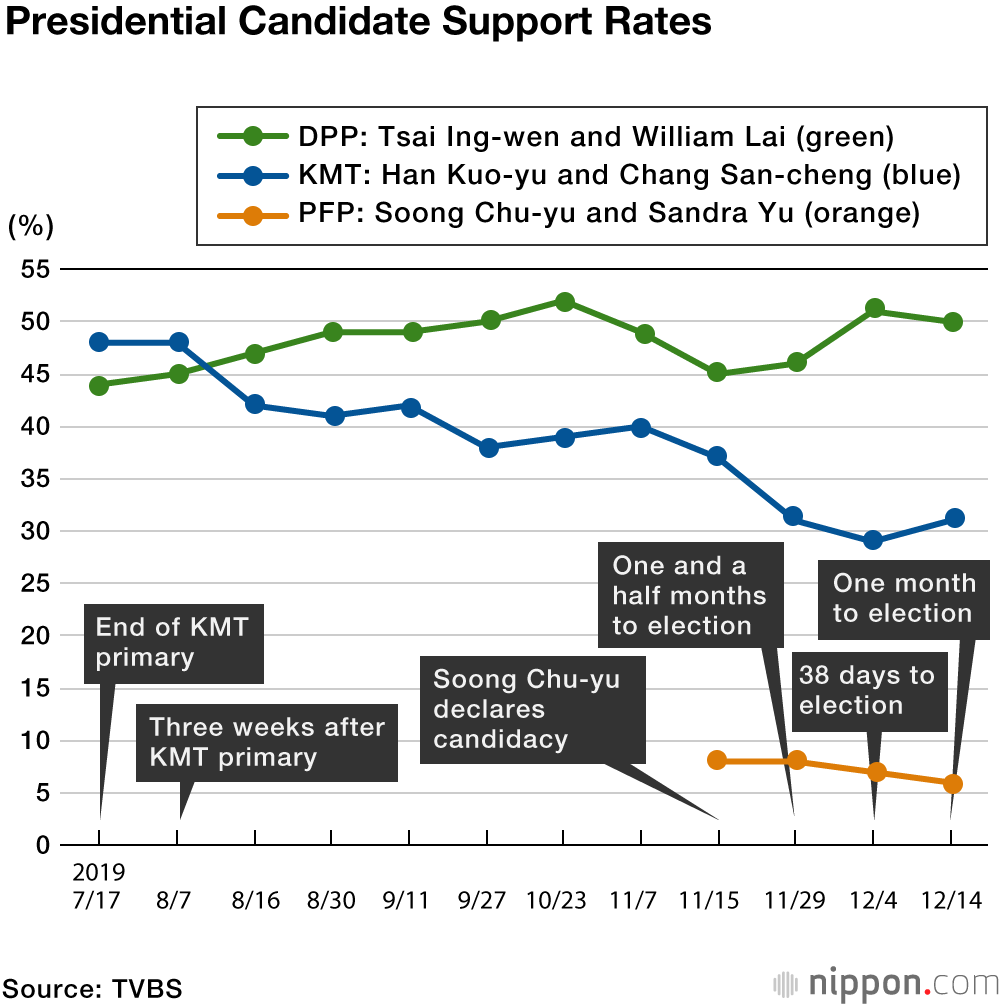 Other opinion polls also show Tsai leading by a large margin of around 15% to 30%. Han is also suffering from the presidential candidacy of the PFP’s Soong, whose political base overlaps with that of the KMT. Soong, who has taken part in almost every presidential election since 2000, is a veteran politician with a loyal base of support, so he is expected to garner around 5% to 10% of the total vote. In light of the current outlook, it seems that Han has almost no chance to win. Compared to past presidential elections, it is unusual for such a huge gap to open up between the main candidates.

A parliamentary election contesting 113 seats will be held on the same day as the presidential election, and it seems increasingly likely that the late surge of support for the DPP will allow the party to secure a majority. Although the KMT is likely to surpass the 35 seats it won in the previous election, it will not reach the 57 seats it was aiming for.

As noted above, this political situation could not have been predicted by anyone this time last year. In the unified local elections held in November 2018, the DPP suffered a crushing defeat, with most of the top political positions in Taiwan’s major cities going to the KMT and other political forces. As a result, it seemed likely that the KMT would win back control of the government in 2020.

The intensification of demonstrations in Hong Kong since June 2019 seems to be the primary explanation for why the political situation has reversed in Taiwan. Why has the Hong Kong situation exerted such an influence on the 2020 election?

One answer to that question can be found in the expression 亡国感 (wangguo gan), the “sense that the nation is doomed,” which has become popular during the current election campaign. It describes people’s sense of crisis that Taiwan will cease to exist if it follows its present course. Symbolic of this feeling is another expression: “Today’s Hong Kong is tomorrow’s Taiwan.” The images of police suppressing young people in Hong Kong and tear gas filling the streets of that prosperous financial center has made Taiwanese imagine the downfall of their own land.

There are many common points between Hong Kong and Taiwan. Both were ceded by China’s fragile Qing dynasty after defeat in war, with Hong Kong going to the British and Taiwan to Japan. The Chinese Revolution that revived the country gave birth to the People’s Republic of China led by the Communist Party, and one of the state’s deeply engraved reasons for being was to restore those lost territories.

This is why, after the reversion of Hong Kong to China in 1997 and Macao in 1999, one of the most vital national policies for Beijing has been reunification with Taiwan. The issue of Taiwan is thus seen as an extension of the issue of Hong Kong—part and parcel of the restoration of China’s lost territories.

In addition, Hong Kong has been a “show window” of sorts on the “one country, two systems” principle by which China professes to govern the territory. People in Taiwan have kept a close eye on Hong Kong to see how well that policy is functioning. For Taiwan, the 2019 events in Hong Kong have had great significance in terms of how far China’s word can be trusted.

The “one country, two systems” policy implemented from 1997 in Hong Kong stipulated a high degree of self-government, Hong Kong ruled by its own people, and 50 years without major changes. It was first formulated by Deng Xiaoping in the late 1970s as a policy approach to reunification with Taiwan, but it was first applied to Hong Kong. Since then, subsequent Chinese leaders—Jiang Zemin, Hu Jintao, and Xi Jinping—have all consistently maintained that the same “one country, two systems” policy should be applied to Taiwan.

But confidence in the policy is very low in Taiwan. According to opinion polls and other sources, the level of trust in China’s “one country, two systems” pledge is under 10%. In Hong Kong in recent years, the principles of freedom and constitutional government are being undermined, so that there is little hope in the implementation of democracy. Even the KMT’s Han Kuo-yu, who has taken a conciliatory line toward China, has been obliged to declare in his election campaign that the “one country, two systems policy has failed.”

Of course, since Hong Kong is a part of China in both name and reality since its return from Britain, the power of the central Beijing government extends to its territory. Taiwan, meanwhile, is able to choose its leaders by democratic methods without Chinese intervention. Moreover, in an emergency situation in Taiwan the US armed forces are expected to be mobilized, presenting a deterrent against China’s use of military force. In Hong Kong, in contrast, the US military would unlikely to take any action unless the lives of American citizens there were seriously threatened.

However, despite those differences, Taiwanese politics react sensitively to events in Hong Kong, and a spiritual bond exists between these two places, both under political pressure from Beijing and resisting its implementation of the “one country, two systems” policy. Hong Kong is like a mirror reflecting the future of Taiwan, and Chinese policy toward the two territories has bound them together at a deep level. 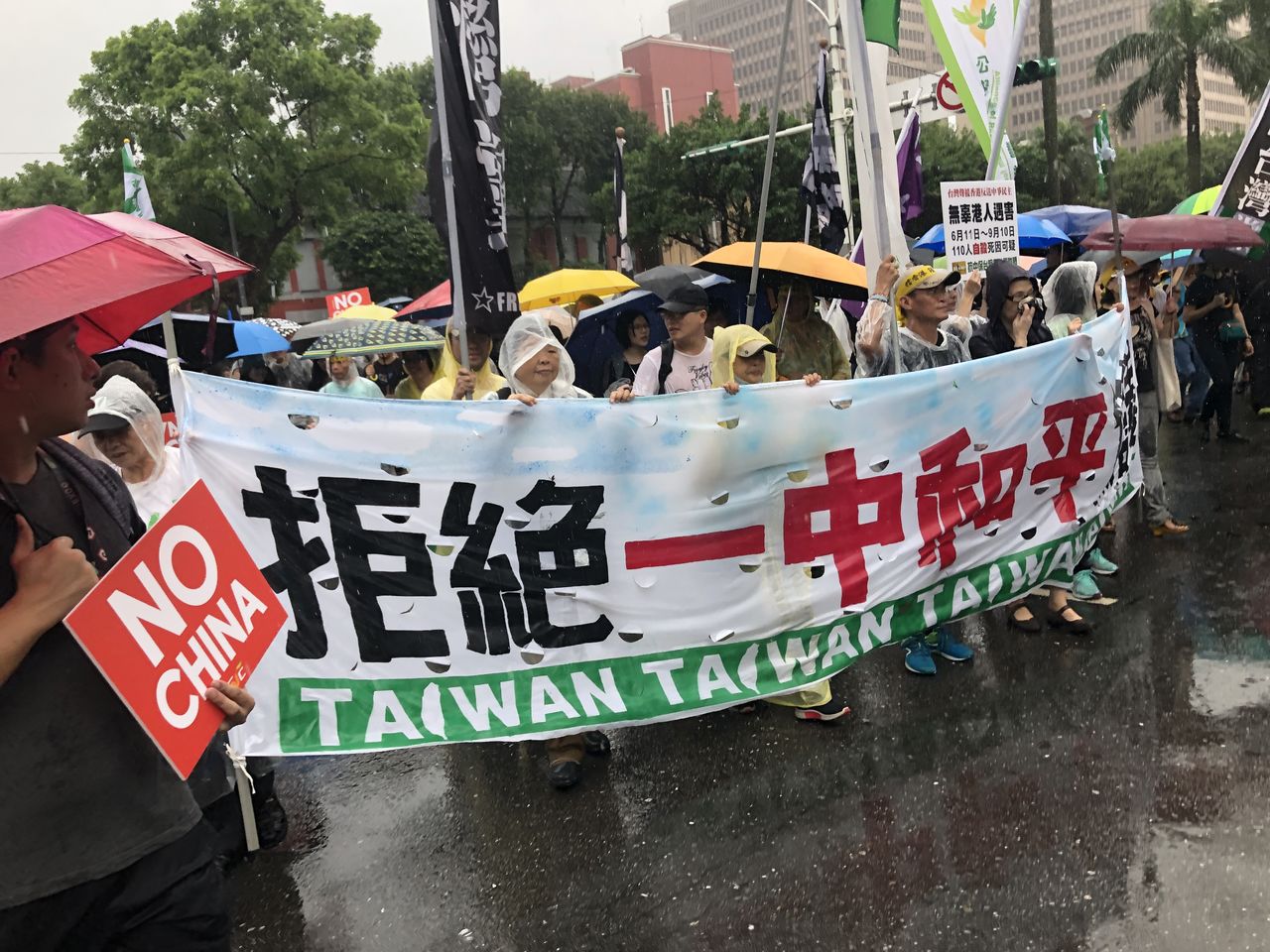 The people of Taiwan and Hong Kong were mutually estranged in terms of their political consciousness around Hong Kong’s 1997 reversion to Chinese control. People in Hong Kong did not show much interest in the democratization in Taiwan, instead holding a negative image of politics there as chaotic. And Hong Kong seemed to be proud of the stable relations it was building with China.

However, as China became increasingly opposed to political reform in Hong Kong, seeking to integrate the territory more tightly into the motherland under the rule of Xi Jinping, the people of Hong Kong began to take a more positive view of Taiwanese democracy. Political symposiums and other events connected with the democracy movement that could not be held in Hong Kong were hosted in Taiwan, bringing about a steady stream of democratic activists from Hong Kong traveling to Taiwan. There has been a rapid increase in people from Hong Kong seeking to migrate to Taiwan or seek political exile there. For many residents of the former British colony, the island of Taiwan has become a sort of “port of refuge.” This sort of connection between the situations in Taiwan and Hong Kong has created what I refer to as a sense of “resonance” between the two places.

Everyone can recognize that Xi Jinping’s hardline policy has forged an emotional bond between the people of Hong Kong and Taiwan. The question is whether a landslide victory by Tsai Ing-wen, who opposes Xi’s political line, would lead to a change in the policy of China toward Taiwan and Hong Kong—and if so, whether it would be a change toward conciliation or rather toward making the hard line even harder. The attention of people in Japan will also be closely focused on these developments.

(Originally published in Japanese on December 25, 2019. Banner photo: Three candidates in the 2020 Taiwanese presidential election at a December 18, 2019, debate held in Taipei: from left, DPP candidate Tsai Ing-wen, the PFP’s Soong Chu-yu, and Han Kuo-yu of the KMT. © Reuters/Aflo.)