Politics Health Mar 2, 2020
On February 25, the Japanese government rolled out its basic policy aimed at stemming the spread of COVID-19 infections. Large gatherings of people present infection risks, leading officials to urge organizers to cancel large-scale events. A particularly controversial request was for schools nationwide to halt classes for the next several weeks.

Hospitals Busier Than Ever

The COVID-19 outbreak in Japan has developed recently into a more fatal one, with deaths of elderly patients in Hokkaidō, Tokyo, and Wakayama Prefectures. As of March 2, the total number of deaths in Japan from the novel coronavirus, including of patients infected aboard the Diamond Princess cruise ship, had risen to 12, and infections had been confirmed in 25 prefectures nationwide.

Japan’s residents will need to change their approach to hospital and clinic visits during this outbreak period. The nation’s medical facilities remain, of course, places for people to seek help when their health is at risk. Today, though, they are reporting unprecedented crowds of people worried about COVID-19 and seeking to be tested for it.

A body of infectious disease specialists convened by the government issued a report on February 24 spelling out Japan’s basic stance on battling the disease. That report noted that many of the hospital beds in the capital region dedicated to infectious disease care were already in use by patients disembarking from the Diamond Princess and warned that a rush of people overly concerned about infection could swamp medical care providers and cause chaos in the system.

The cruise ship berthed in Yokohama saw more than 700 infections, and these patients have been distributed to numerous facilities in Tokyo and the surrounding area. This has caused considerable stress on those facilities and their staffs; further outbreaks of the disease would clearly present a major challenge to Japan’s medical system, which could end up unable to provide intensive care to the most serious cases.

The media has reported on the situation in hospitals in Wuhan, China, the epicenter of this epidemic. There hallways are filled to overflowing with patients and others seeking care; the result has been a collapse of a properly functioning care system. Conditions in the Tokyo region are nowhere near that level yet, but we cannot ignore the possibility that they will take a turn for the worse. 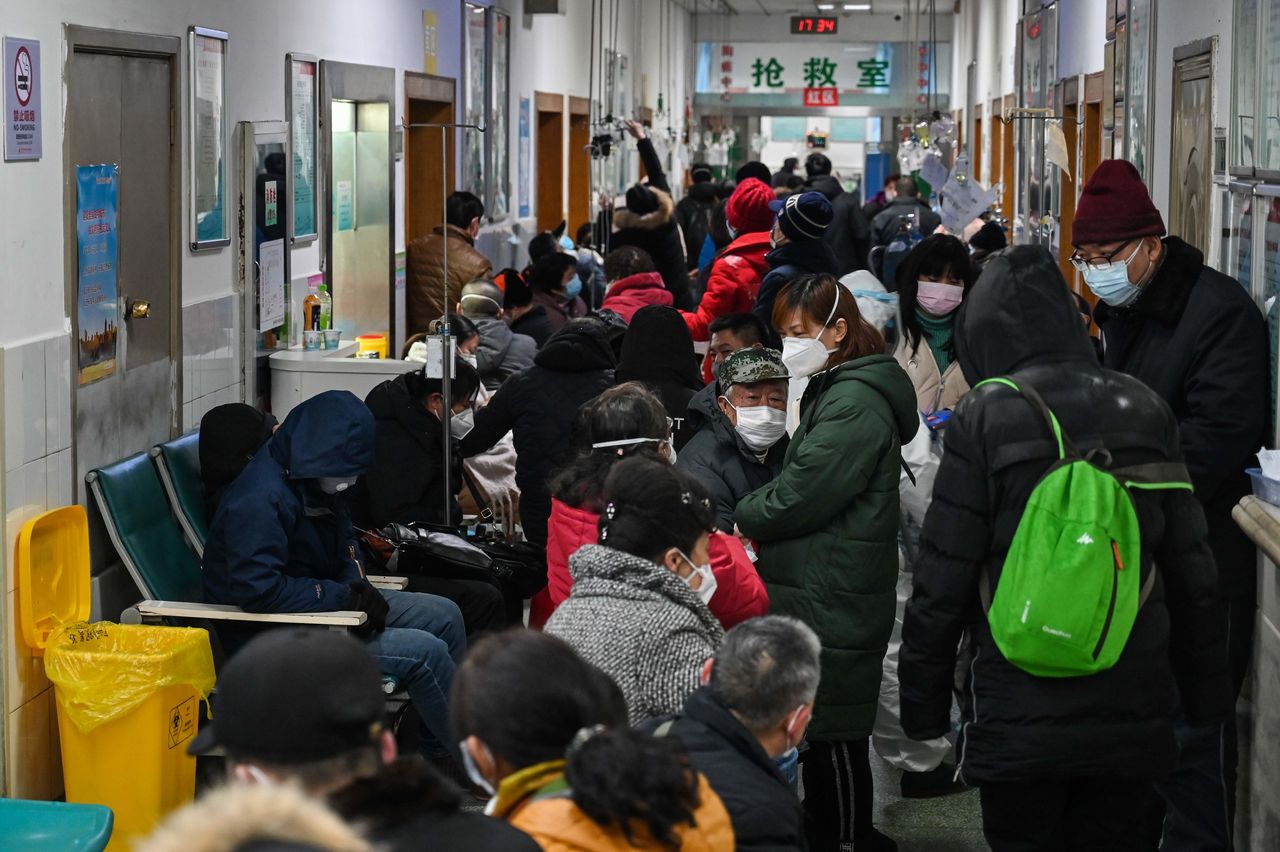 Patients and people wanting to be tested for the new coronavirus pack a hallway at the Wuhan Red Cross Hospital on January 25, 2020. (© Hector Retamal/AFP/Aflo)

The government’s specialist panel also warned of the danger that medical facilities could become sites for infection to spread further. A rush of people with light cold symptoms, like fever or a cough, descending on clinic waiting rooms out of concern that they had contracted COVID-19 would form groups of people in contact with one another for hours at a time, creating routes for potential new infections.

Kaku Mitsuo, an infectious disease specialist and specially appointed professor at Tōhoku Medical and Pharmaceutical University, explains the government’s aims: “Over the next two weeks, the goal is to minimize mass gatherings of people to avoid the creation of new infection clusters. Large numbers of people seeking outpatient care at medical clinics or hospitals certainly count as mass gatherings, and the risk of an infection spreading is especially high in their case, since they include more people in poor health to begin with. People need to view hospitals as places where there’s more chance of coming into contact with the coronavirus, and avoid them as much as possible.” Kaku, just like the government, is sounding the alarm about the dangers of crowded medical facilities as hotbeds for new COVID-19 clusters.

The Best Bet: Rest and Recuperation at Home

The government’s basic policy reflects the above understanding in its recommendation that people with lighter, coldlike symptoms rely on bed rest and convalescence at home, rather than heading to clinics or hospitals for medical attention. The policy also includes measures aimed at allowing people at higher risk of infection to avoid facility visits in the first place, such as by letting the elderly and patients with underlying conditions fill prescriptions over the telephone instead of in person.

In one departure from previous approaches, the basic policy also calls on general medical facilities in areas where COVID-19 cases have risen rapidly to examine patients suspected of carrying the virus. Previously, these people had to call a consultation center to arrange examination at a specialized clinic, but worries that these specialist centers could be swamped to the point of incapacitation led to the change in policy direction. General clinics are being instructed to arrange examination hours and lines of patient movement (such as specifying separate entrances for use by suspected coronavirus carriers) to minimize the chance of further spread of the virus.

Another key means of preventing collapses in the medical care system is by slowing the increase of patient numbers. Toward this end, the policy asks those with cold symptoms to avoid going out and to take time off from work, as well as urging companies to let employees work from home and commute at off-peak hours when possible. It also requests event organizers to cancel large-scale gatherings and schools to close temporarily to prevent groups of people from coming together.

This last request took new shape in dramatic fashion on February 27, when the Abe administration asked the nation’s elementary, junior high, and high schools, along with institutions for special-needs learners, to close from March 2 up through the spring break, which begins toward the end of the month at the finish of the Japanese academic year.

The basic policy announced on February 25 also mentioned school closures to prevent further spread of the virus after the number of patients jumped, but only went so far as to say that prefectural governments might have to ask municipal boards of education and private-school operators to shut their schools on a limited basis as needed. The national government has taken this much farther, and at an especially busy part of the academic calendar, with entrance exams and graduation ceremonies being impacted by the request. Educators are understandably at a loss as to how to respond. Some experts on the committee that produced the earlier recommendations were careful to note that there had been few infections observed among children, making school closures not likely to do much good. (There were also some who thought that closing classrooms could work alongside the cancellation of major events to help stem the spread of the disease, though.)

Emergency Situation in the North

In Japan’s northernmost prefecture of Hokkaidō, February 28 brought news of 12 new COVID-19 infections, bringing the prefectural total to 66. The marked rise in cases prompted the government in Sapporo to declare a three-week emergency, beginning that day and running through March 19. Governor Suzuki Naomichi called on Hokkaidō’s citizens to avoid leaving their homes over the February 29–March 1 weekend in particular.

Novel coronavirus infections have now been confirmed in Asia, Europe, North and South America, Africa, and Australia. With the Tokyo Olympics scheduled to kick off in July, planners are already looking at ways to reduce the scale of the Japan torch relay, which is set to begin in Fukushima Prefecture on March 26. Meanwhile, the International Olympic Committee, which has final say over the event, has hinted at the possibility of postponing or canceling the Tokyo Games entirely, adding to the frenzy over the COVID-19 crisis. The coming two weeks could indeed be decisive in how it plays out in Japan—and worldwide.