Sports Tokyo 2020 Jul 29, 2021
Without spectators at the Tokyo 2020 games, volunteers have less to do than originally planned. The Nippon Foundation Volunteer Support Center organized a project that gathered more than 1,300 people to sing the anthems of all participating national teams, publishing the videos online to encourage the athletes.

The Tokyo 2020 Olympic Games, postponed for a year due to COVID-19, are now underway, but that same pandemic forced decisions to ban all spectators from overseas and, earlier this summer, to hold almost all events without live spectators from inside Japan as well.

The Nippon Foundation Volunteer Support Center, launched to provide training and hold events for the volunteers helping out at the Olympic and Paralympic Games, decided that something needed to be done so that these helpers could send messages to the foreign fans unable to attend the events and cheer on the athletes during their competition. The outcome was the Yell for One Project: the creation and online sharing of performances of the national anthems and official flag songs of all 204 competing teams at the games.

The original aim of this project was to have the games volunteers and city volunteers, a second group tasked with helping visitors find their way around Tokyo and get tourism or event-related information they needed, sing these songs. The effort spread from the volunteers themselves to their families and friends, and then to schools and companies around Japan. In the end, more than 1,300 people, from children to senior citizens, signed up to take part in the performances.

The recording firm King Records, the Philharmonic Chorus of Tokyo, the Japan Philharmonic Orchestra, and other organizations came together to help produce the videos for uploading. The results can be viewed at the page linked above: 204 videos, with songs for every team participating in the summer games this year.

Each video features six singers (or small groups of singers) who filmed themselves performing the songs. Some of them are foreign nationals singing their own country’s anthem, while others are people who have friends or family living in the country in question, or who are simply fond of it and chose to support it for that reason. 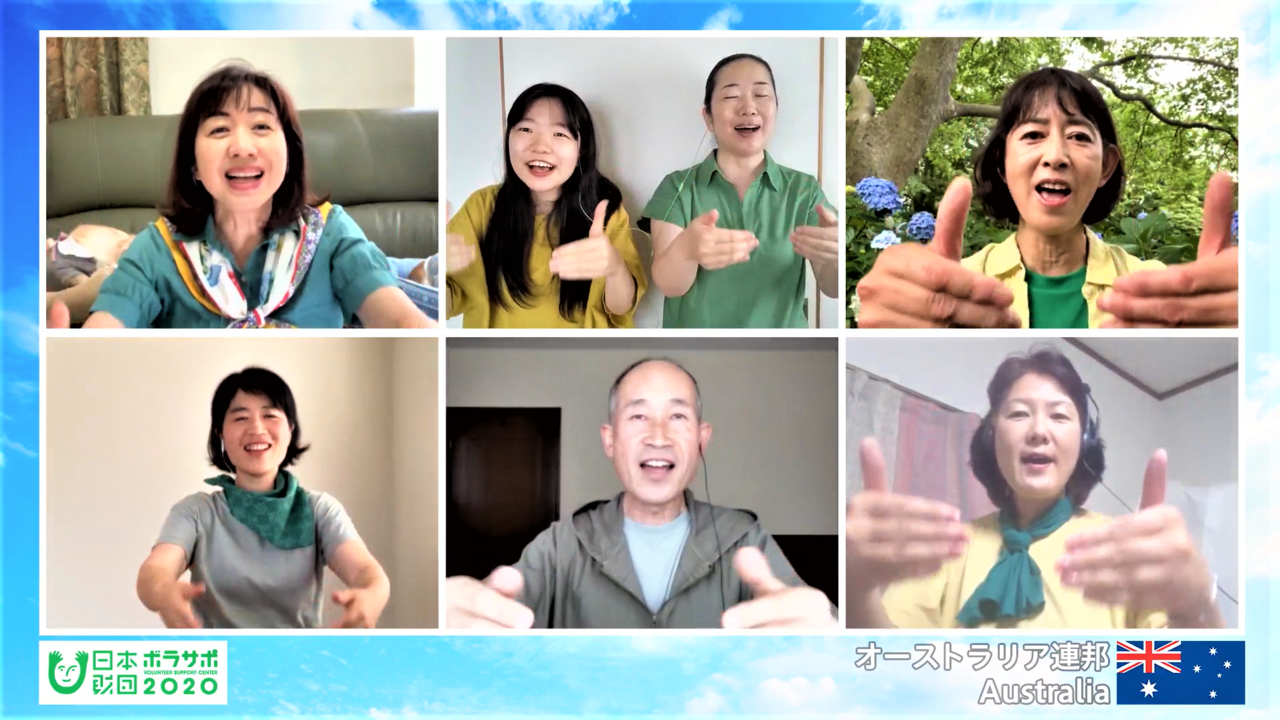 A frame from the performance of “Advance Australia Fair,” the Australian national anthem.

Avari Chung, a volunteer from New Zealand now living in Tokyo, says, “I love Japan so I applied to be part of the team singing ‘Kimigayo.’ I wore a yukata for my video appearance. I’d heard the anthem many times before, but this was my first time to actually sing it, and as I looked up the meaning of its lyrics, I got to learn yet more about this country.”

Japanese national Tokita Akihiro helped sing the Saudi Arabian national anthem. “I spent 25 years in the country for work,” he says. “I always found the Saudi people very friendly, and I was constantly being helped out by them. I wanted to take part in this project as a way to express my gratitude to them for that quarter-century of my life. I have to admit, though, that I was embarrassed to send in a video of me singing alone, so I got my wife and daughter to take part with me!”

A spokesperson for the Volunteer Support Center states: “The games are underway right now, with amazing competition taking place every day. We hope that people enjoying the action at home will sing along with these videos as they cheer on the national teams.”

From July 30 through August 29, the center is also offering City Cast Virtual Tours. Available in both Japanese and English, these live online tours give people around the world a chance to sample Tokyo’s charms along with volunteer guides. People may be missing out on the Olympic action in person, but they can check out the tour menu at the link above and sign up for tours that catch their eye.

(Originally written in Japanese. Banner photo: An image from the Yell for One Project website shows some of the many participants. All images courtesy the Nippon Foundation Volunteer Support Center.)