Guide to Japan Art History Oct 5, 2022
Minamishimabara, Nagasaki, is home to many historical sites related to the region’s “hidden Christians.” Soon the area will be home to the world’s largest wooden carving of the Virgin Mary, which is being created by veteran carver Oyamatsu Eiji to commemorate Christians who died in the seventeenth-century Shimabara Rebellion.

The grandest monuments to the Christian faith tend to be found in the countries of the West. Now, though, a new one is taking shape in a rural spot in Nagasaki Prefecture. Named the Virgin Mary of Hara Castle in the Guise of Kannon, the wooden statue is approximately 10 meters tall and employs an azekurazukuri construction that features giant, interlocking camphor logs harvested at 200 to 300 years of age.

Lasting from October 1637 until February 1638 and taking place in the southern part of Shimabara, the Shimabara Rebellion was one of the largest popular uprisings in Japanese history. In addition to being a peasant revolt against the relentless taxation by the Matsukura clan, the local ruling family, the rebellion also had religious elements and resulted in the deaths of many Christians who joined, unable to tolerate the oppression of the Tokugawa shogunate.

Hara Castle was the last stronghold of the rebels. Here they endured repeated sieges, with local residents holed up under the command of the 16-year-old Christian Amakusa Shirō. In all, some 37,000 rebels and shogunate soldiers are said to have died on the castle site.

After the revolt, the shogunate completely destroyed every last stone fort remaining on the grounds. When excavation began in 1990, many human bones were found at the site, along with crucifixes, medals, and rosaries. 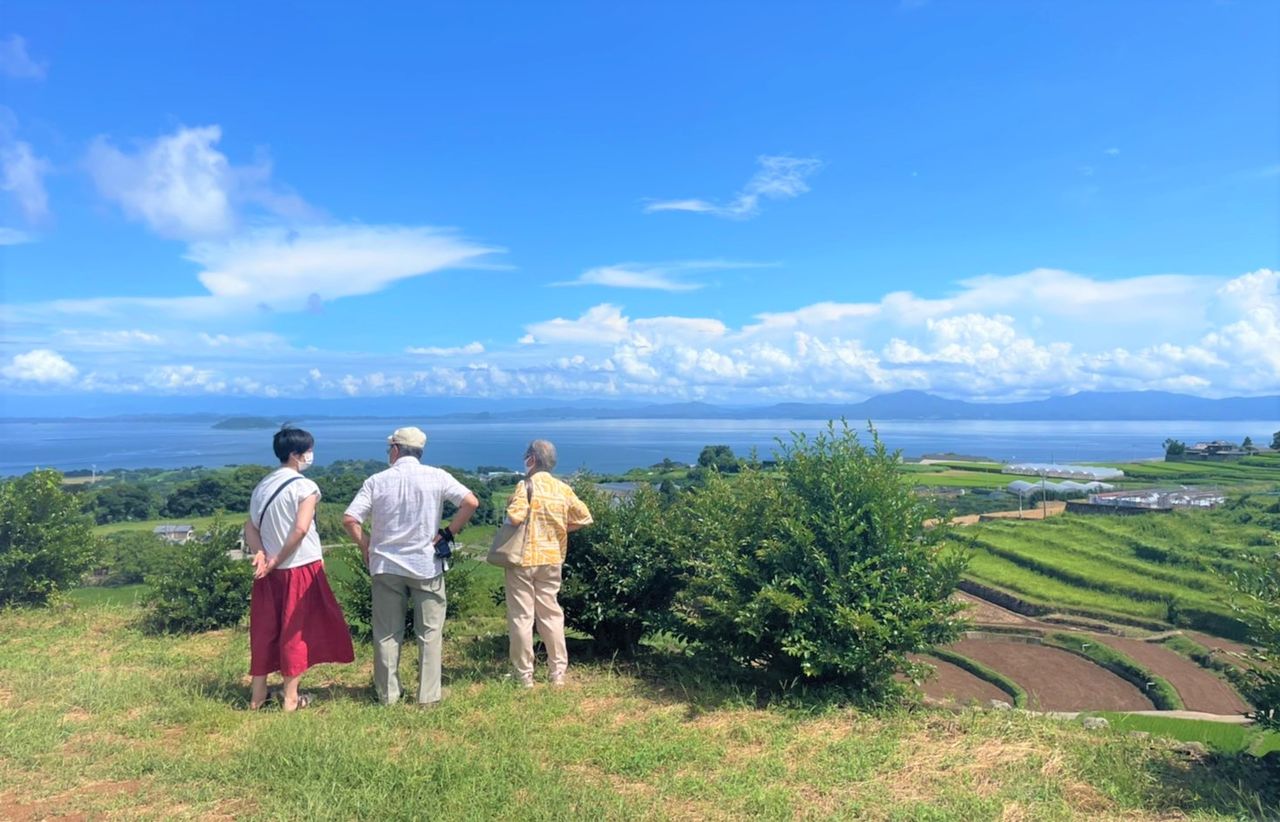 The UNESCO World Heritage–listed Hara Castle Ruins seen from the site of the Virgin Mary statue.

Raised a Catholic, Oyamatsu Eiji was born in Ryōtsu (now Sado) in Niigata Prefecture in 1934, and now lives in Fujisawa, Kanagawa. A member of the Nitten (Japan Fine Arts Exhibition) organization, he was awarded the nation’s highest honor in fine art, the Prime Minister’s Award, in 2011. In 1981, Oyamatsu presented Pope John Paul II, who was visiting Japan, with a small carving of Virgin Mary in the guise of the Buddhist figure Kannon. At the same time, he also decided to carve a giant version at his own expense as an offering to the victims of the Battle of Shimabara.

While Oyamatsu originally intended to gift the sculpture to the city of Minamishimabara, that plan hit a setback in 2015 when local opponents argued that such a gift would violate the spirit of separation of church and state. Subsequently, a group of local volunteers established the Citizen’s Association for Minamishimabara World Heritage, which began both crowdfunding and conventional fundraising efforts with the aim of eliciting private donations, and also began work on a building to house the statue. In July 2022, the sculpture was transported in pieces from the artist’s Fujisawa studio to the site.

“As a sculptor, even when I had no money and there was no interest in my work, I kept my chisel in my hand, praying to God to bestow me with a suitable job that I could devote my life to. Receiving the blessing of Pope John Paul II was a great motivation. My sole focus is to create an offering that will comfort the victims of the Battle of Shimabara and be a salvation for their neglected souls,” says Oyamatsu.

The artist is currently putting the finishing touches on the statue, which he aims to complete in late October or early November.

In leveraging the site’s celebrated status, the Citizen’s Association for Minamishimabara World Heritage plans to use the statue building as a hub for revitalizing the local economy and a place for locals and tourists to interact.

“We aim to sell local specialties, host art and music events, and otherwise make this a place that is always filled with laughter. We want it to be a symbol of Minamishimabara that local children can be proud of,” says a spokesperson. 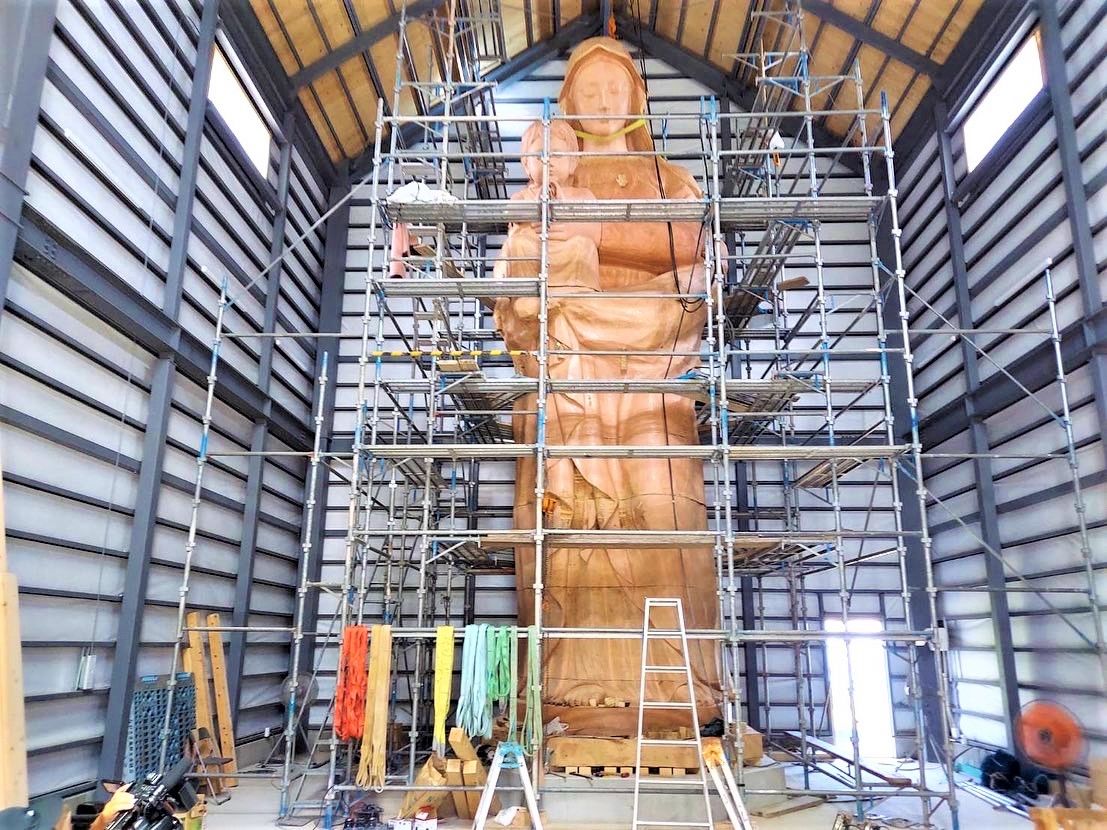 The statue was transported from the artist’s Fujisawa studio in pieces and reassembled in this purpose-built enclosure. It now awaits painting. 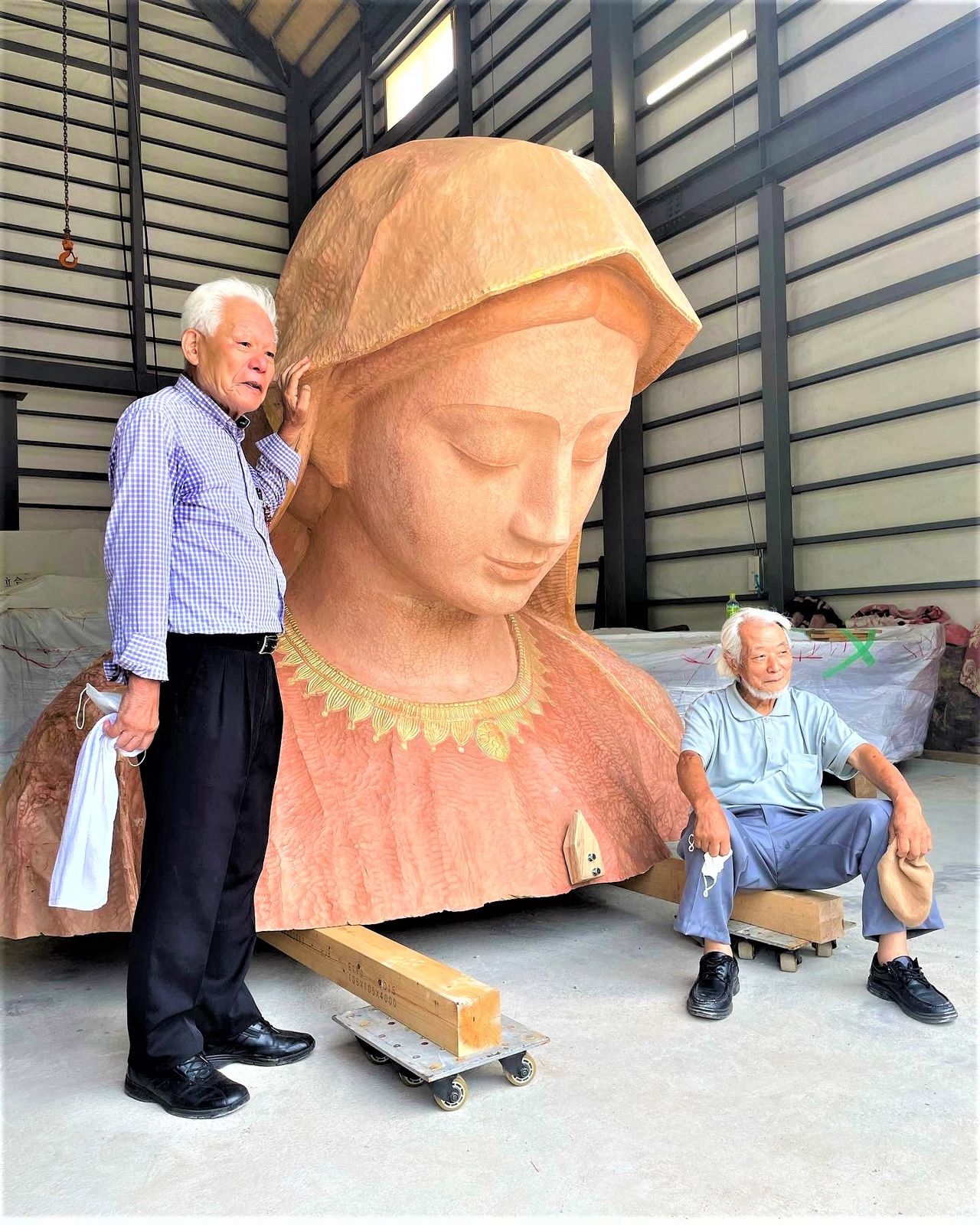 (Originally published in Japanese. Banner photo: Oyamatsu has worked single-mindedly on the project. All photos © the Citizen’s Association for Minamishimabara World Heritage. Reporting by Nippon.com.)