Based on the Concept of the Spanish Parador

A “castle stay,” as you would expect, refers to accommodation in a castle. Accommodation is now available in some of Japan’s most famous yagura castle towers or tenshu keeps. The Japan Tourism Agency is also providing assistance, seeking additional properties to subsidize, under a policy to utilize historical assets like castles and temples for tourist stays.

There are many castles in Europe where tourists can stay. In Spain, a key tourist resource are the almost 100 cultural heritage buildings known as paradores: castles, palaces, and monasteries, refurbished as hotel accommodation and managed by the government. Combining high-class lodging services with top-notch historical attractions, these facilities host some 1.4 million visitors annually as a core asset among the nation’s tourism destinations.

Now a Japanese version, based on the European model, has been launched, with a greater focus on luxury. The first instance was Hirado Castle, in Hirado, Nagasaki, which offered free overnight stays on a trial basis in May 2017. Later, in September 2019, the Ministry of Land, Infrastructure, Transport, and Tourism’s Tōhoku District Transport Bureau invited Manlio Cadelo, ambassador to Japan for the Republic of San Marino and his wife to stay in the wooden castle tower in Shiroishi, Miyagi Prefecture. 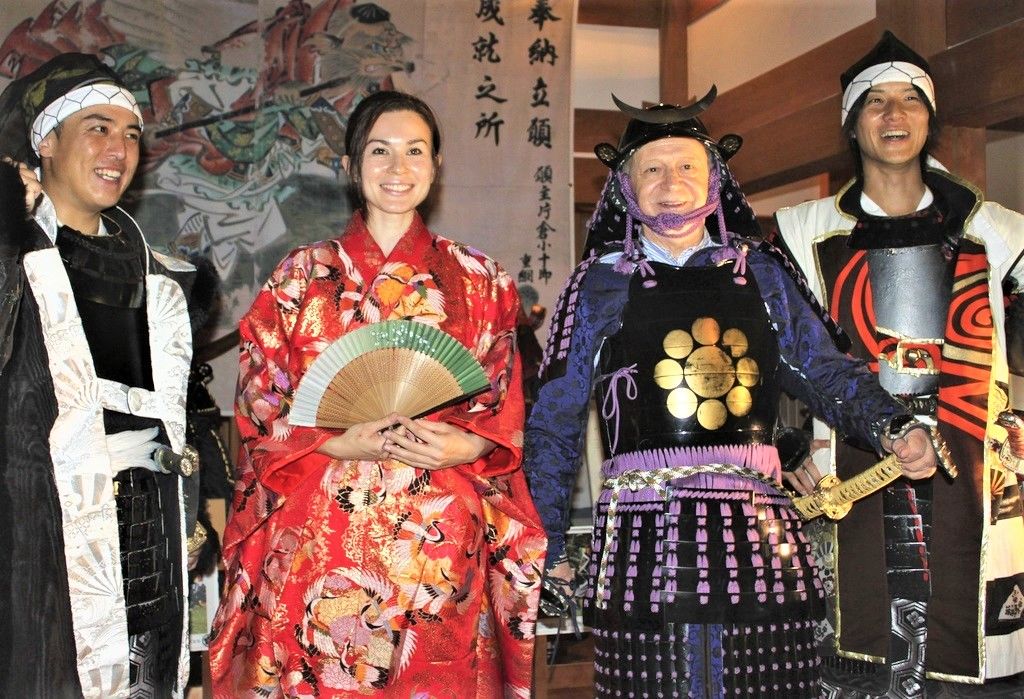 Feel Like Nobility for a Million Yen a Night

More are on the way, but there are currently two castles that offer accommodation: the aforementioned Hirado Castle and Ōzu Castle, in Ōzu, Ehime Prefecture.

Ōzu Castle launched its business in July 2020, during the pandemic, hosting 11 couples through October 2022. It operates from March through November, for up to 30 couples a year (it does not host solo travelers). To date, the castle has received inquiries from roughly a dozen couples from abroad, partly thanks to the rapid decline in the value of the yen. 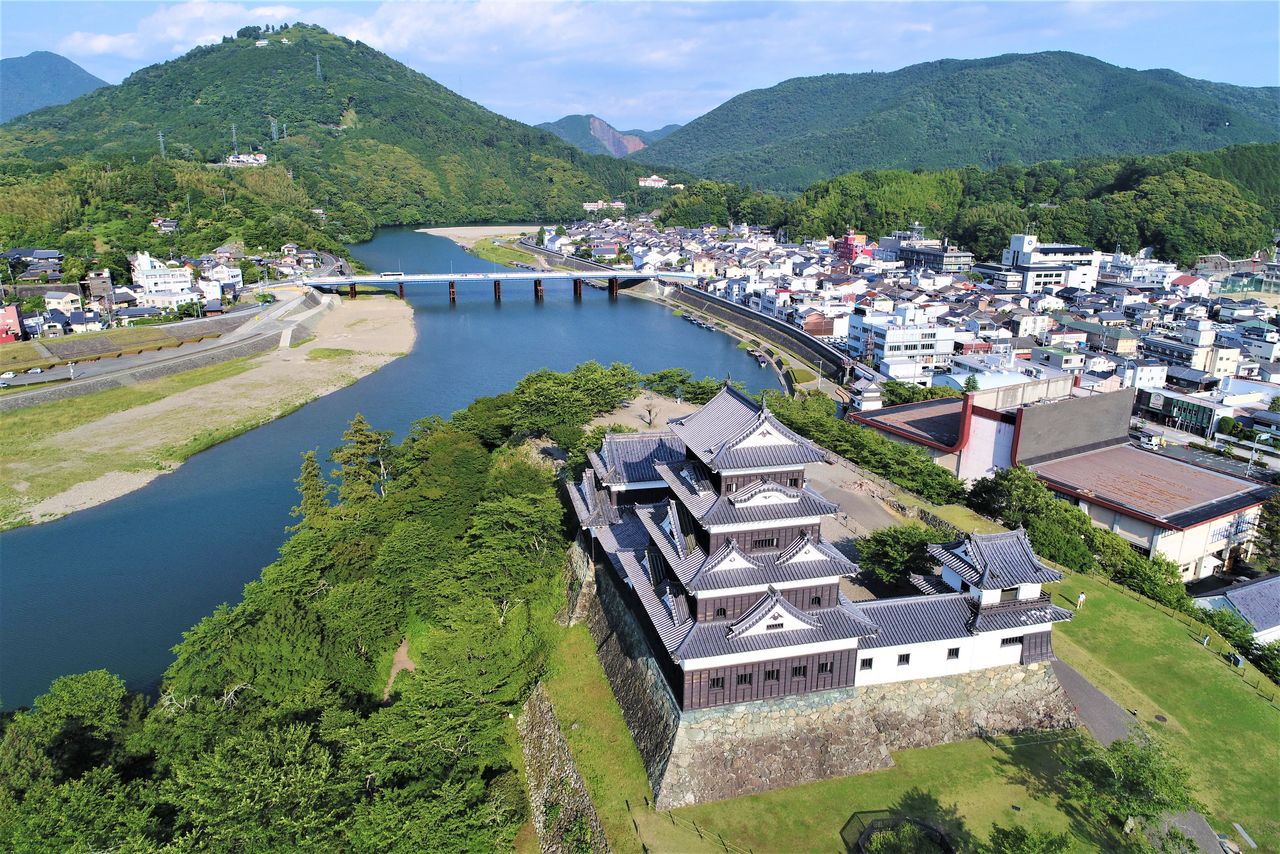 Ōzu Castle was fortified to arrive at its current form in the early Edo period (1603–1868). The main tenshu keep was removed in 1888, but reconstructed in timber in 2004. Guests stay in a bedroom on the tower’s ground floor. (© Value Management)

The base price is ¥550,000 per person per night. The castle advertises: “Live like a lord for a million yen,” referencing the minimum price for two guests (a maximum of six can be accommodated). In addition to the tower accommodation facilities, guests can enjoy the luxuries of dinner in the adjacent watchtower and breakfast in a private room in the nearby villa Garyū Sansō, also designated as an important national cultural property.

According to Yoshida Satoru of Value Management, the company organizing the stay plans, “We set the million-yen price tag to attract attention, and then designed services and experiences to match. Because of the COVID-19 pandemic, until now, our guests have all been Japanese. Many of them have questioned the cost—commenting, surprisingly, that it seems too cheap, and wondering if we were recouping our costs.”

The business, explains Yoshida, was conceived out of local traditions and the well-preserved townscape. “The attention it’s received has boosted recognition of Ōzu. Consequently, this is more than just a luxurious hotel experience—we hope that guests from Japan and abroad understand prior to their arrival that, through this opportunity to stay at the jewel of the city, they are participating in efforts for the utilization, preservation, and transmission of cultural assets.” 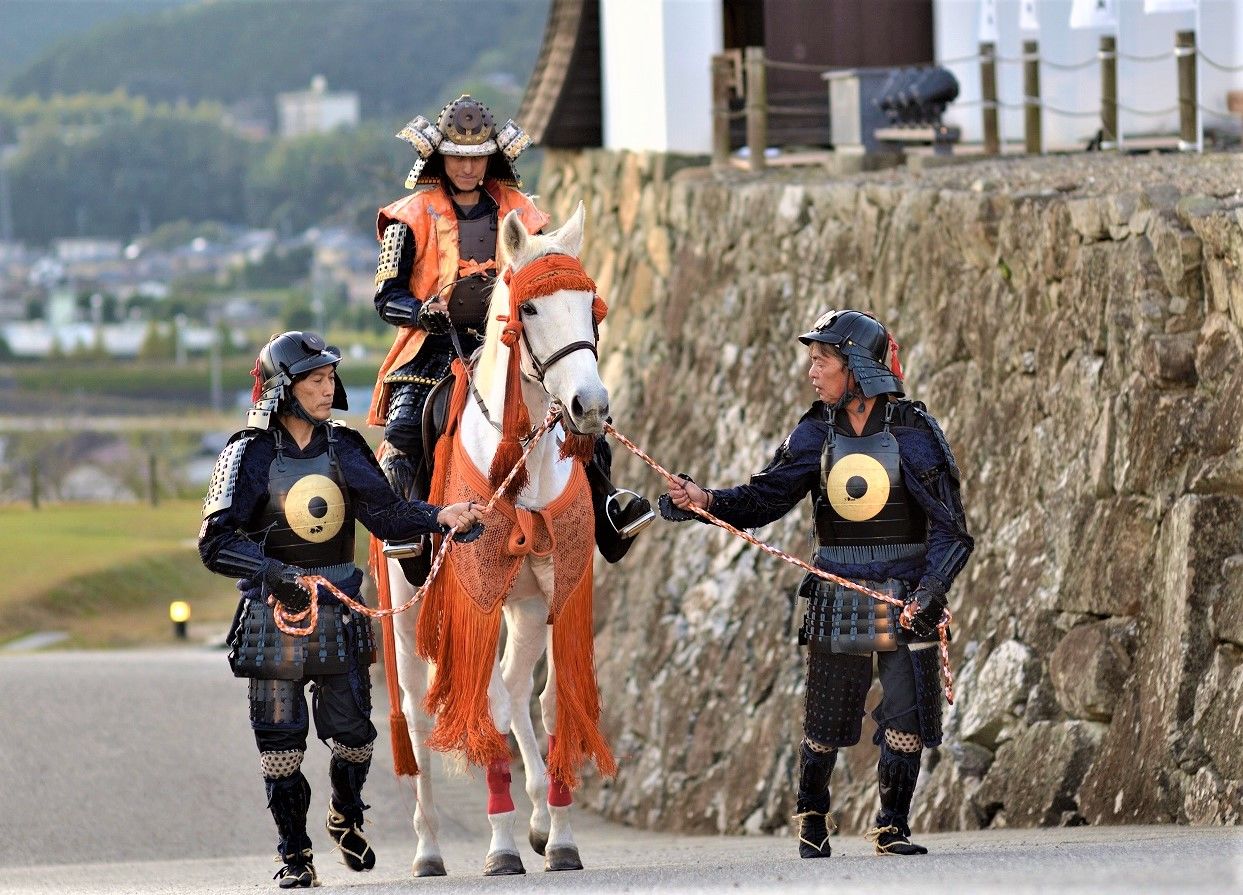 The castle stay begins at 5:00 pm, after the castle closes to the public. Entry starts with a re-enactment of the 1617 arrival of the first lord of Ōzu, Katō Sadayasu, from the province of Yonago. (© Value Management) 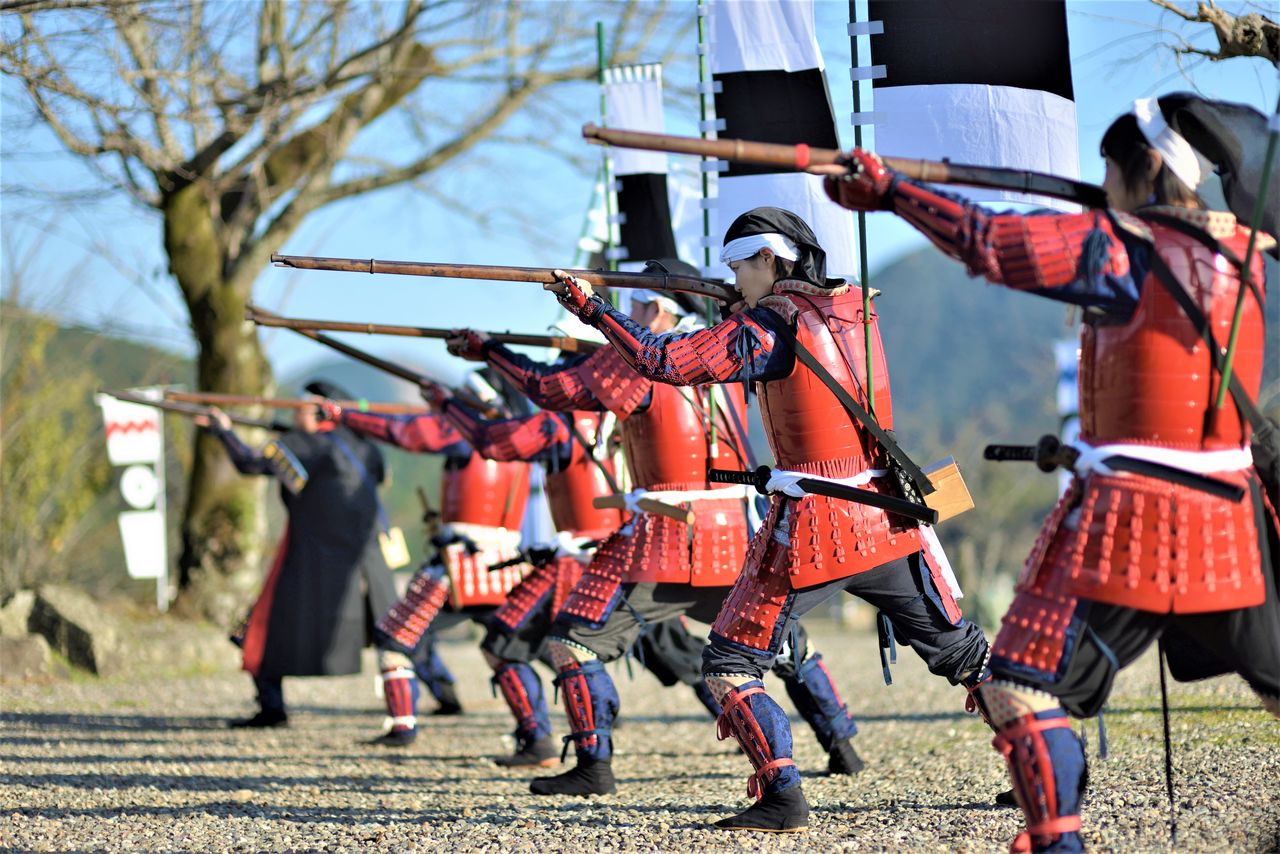 Locals welcome guests in the opening ceremony, acting as members of the gun salute squad and banner bearers, and a conch-shell horn is sounded before the guest, the “lord of the day,” is announced. (© Value Management)

Following on from the one-night event in 2017, Hirado Castle opened as Japan’s first year-round castle accommodation in April 2021.

According to Kurakake Seiya, representative director of the management company Noroshi, “When we advertised for participants for the one-night stay experience, the story was carried by the BBC and other overseas media. As a result, over half of the 7,500 applicants were from abroad. This led us to believe that there could be inbound demand. Roughly 120 million yen was spent on seismic reinforcement and repairs to the watchtower. Our company leased the buildings, refurbishing them to create a two-story accommodation measuring around 120 square meters.”

Hirado, in northwestern Kyūshū, is an idyllic spot, with the Genkainada Sea to the north and East China Sea to the west. It is believed to be the location where the Jesuit missionary Francis Xavier first conducted work in Japan. Prior to the Tokugawa shogunate’s sakoku policy, the port’s international trade flourished.

The city merged with neighboring municipalities in 2005, bringing the population to 40,000, but this has now declined to around 29,000 due to depopulation and the declining birthrate. The castle-stay symbolizes regional regeneration—the city has undertaken other major repairs including the honmaru main castle and stone walls, hoping to lure tourists. 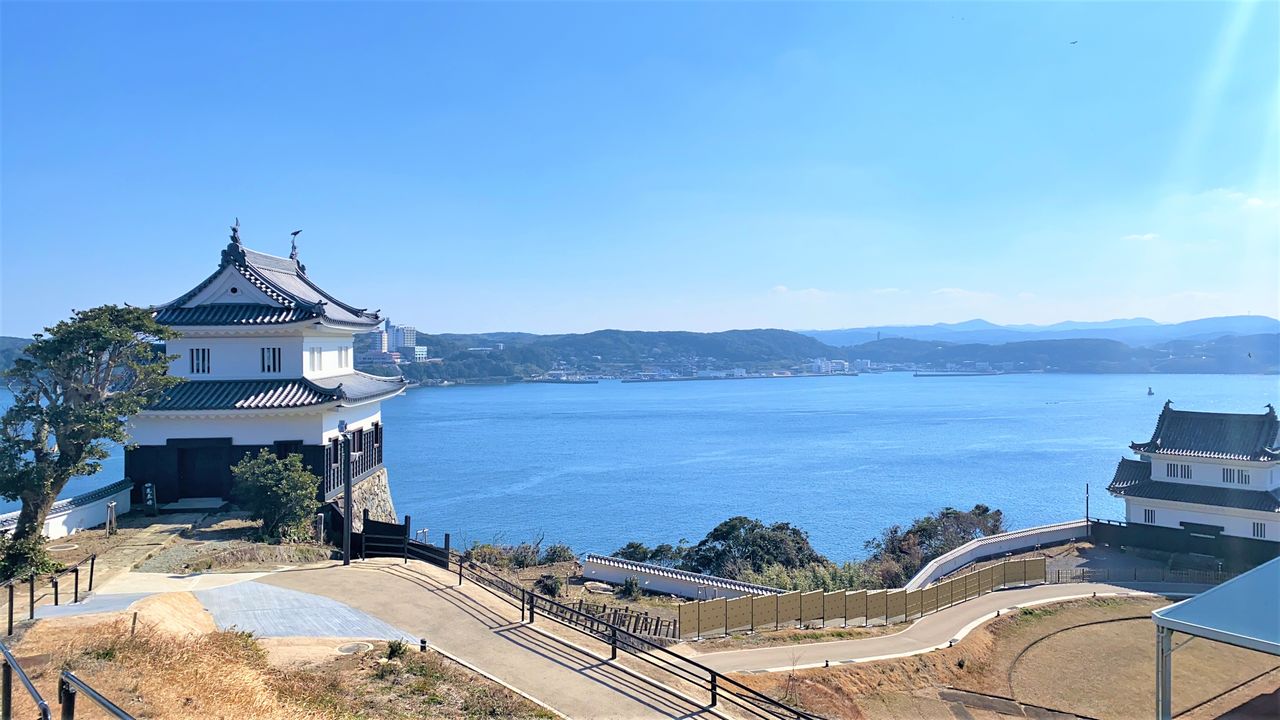 Hirado Castle sits atop a hill, enclosed by sea on three sides. It was constructed in 1704 as the residence of the local feudal lord, Matsura Takashi. In the Meiji era (1868–1912) the government ordered the demolition of castles across Japan, including Hirado, but the keep was rebuilt in 1962. (© Noroshi) 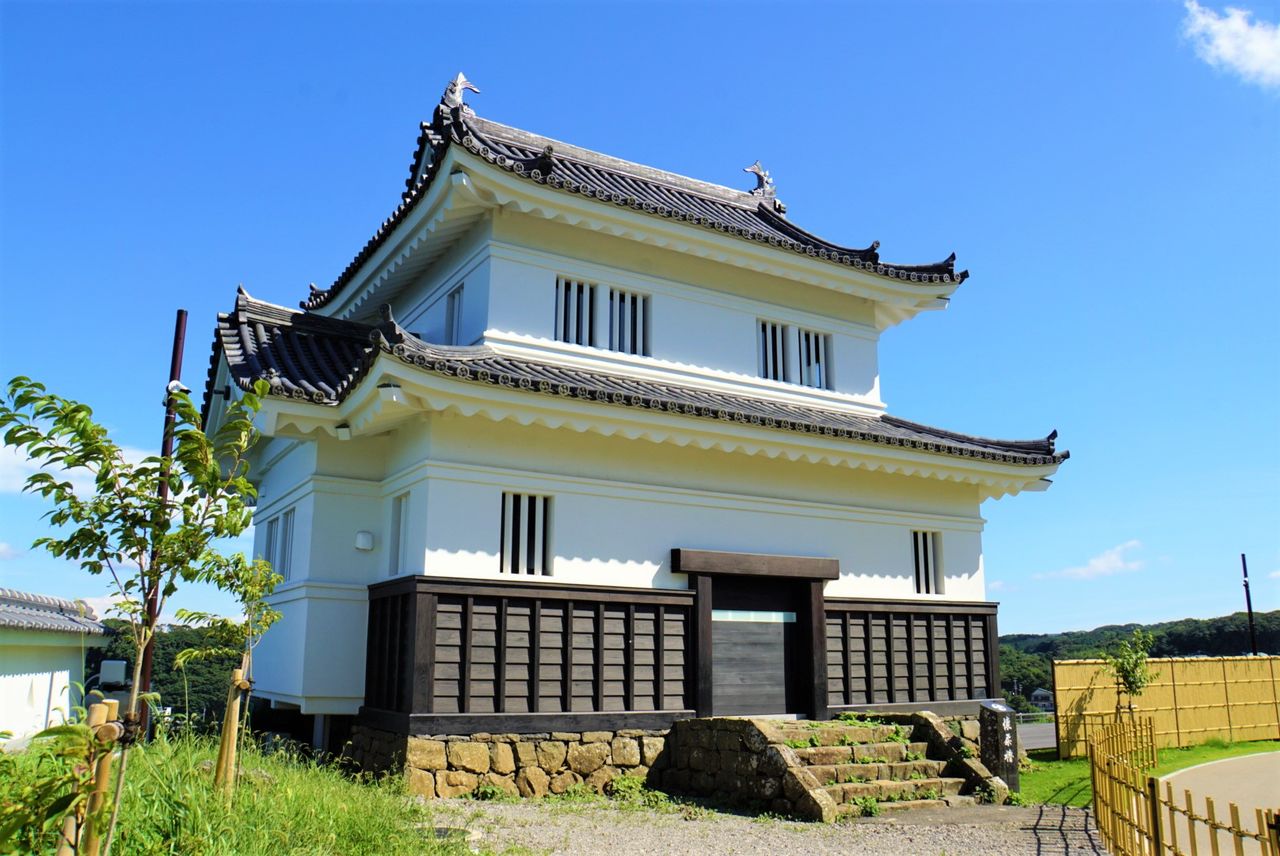 Tourists are accommodated in the two-story watchtower, reconstructed with reinforced concrete in 1977. (© Noroshi)

Accommodation is limited to one couple, starting around ¥670,000 per night. Guests experience extraordinary luxury as the “special lords” of the castle, including a French dinner highlighting local ingredients and a sumptuous Japanese breakfast prepared by staff in the suite’s kitchen.

The interior design incorporates Rinpa School stylization from the late Momoyama period (early seventeenth century), with butterfly and cherry-blossom murals. Optional extras include a performance of Hirado kagura, a ritual folkdance designated as national intangible cultural property, and a limousine service for the two-hour journey from Fukuoka Airport. 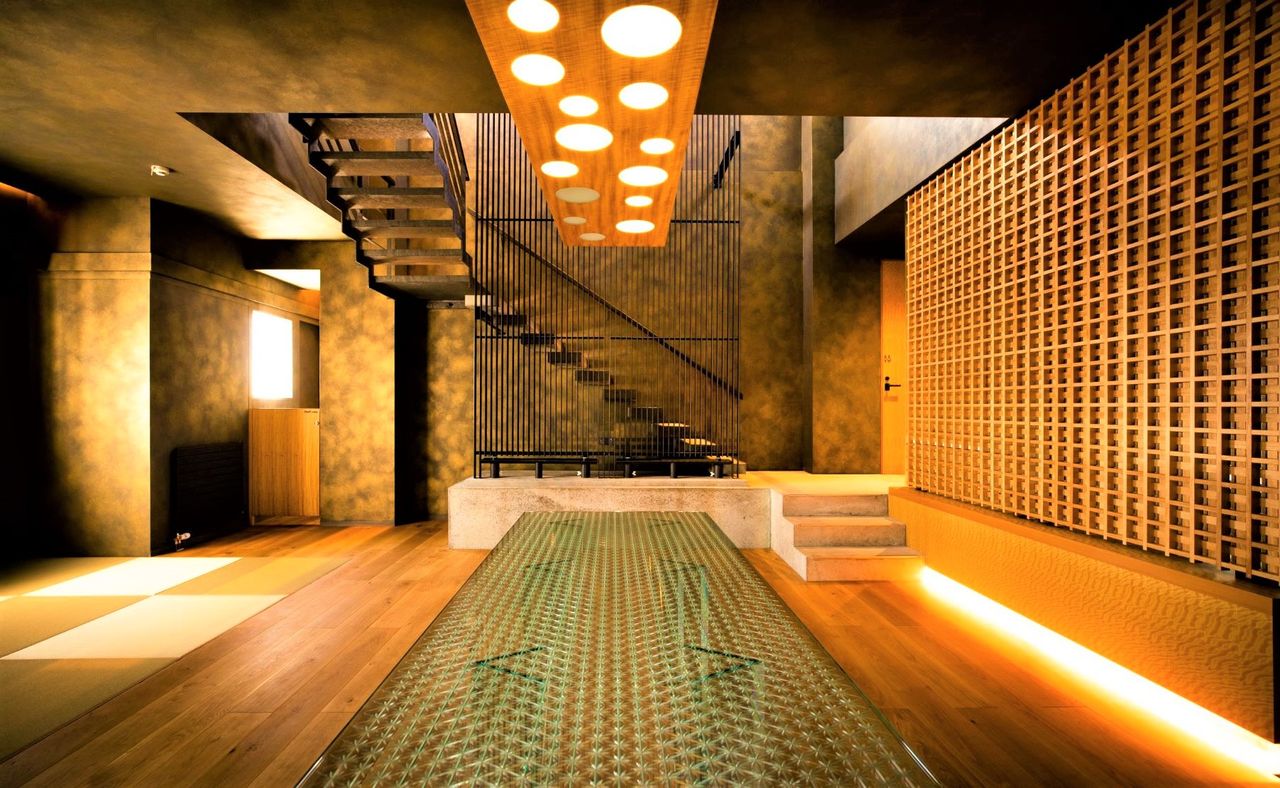 The first floor has modern Japanese dining and living rooms. The bathroom, with glass walls on three sides, looks out over the Hirado Ōhashi bridge. (© Noroshi) 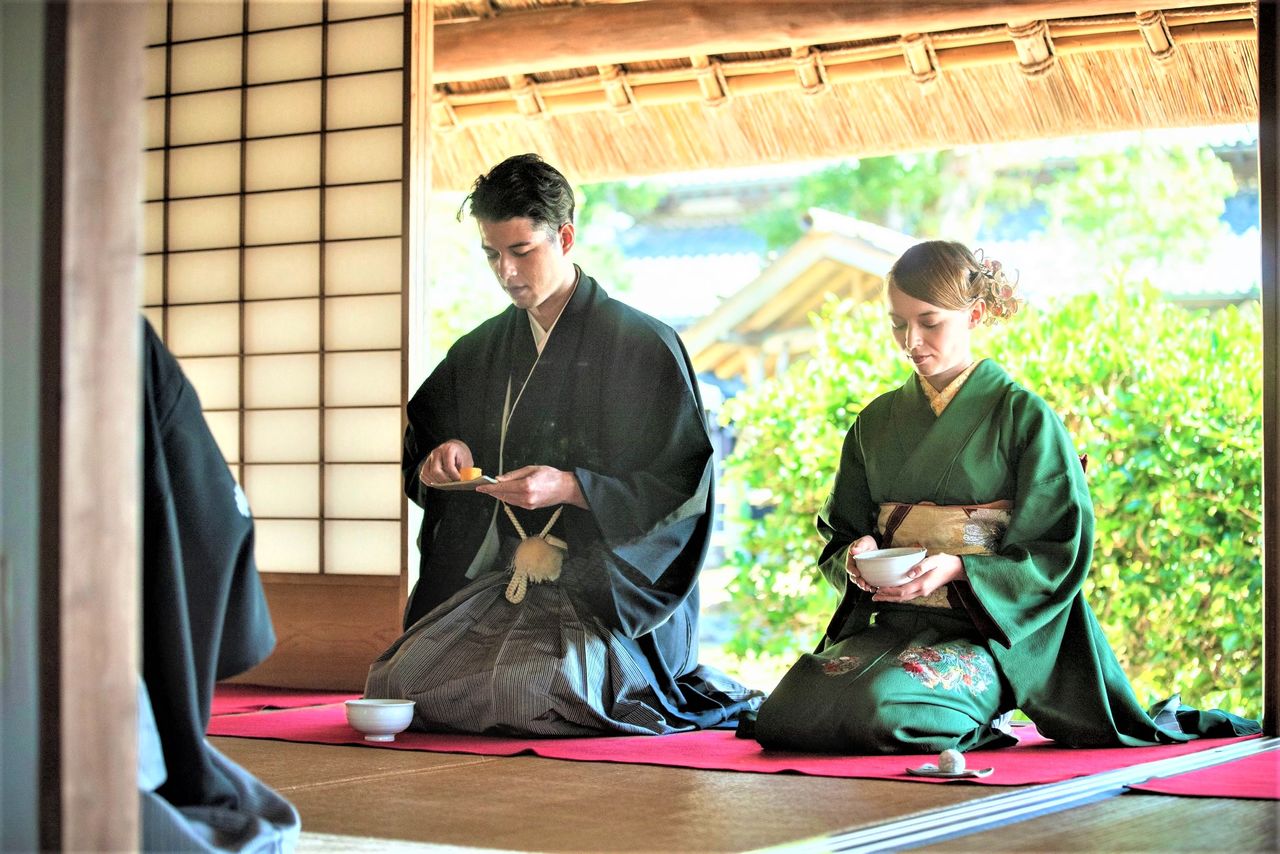 Ōzu Castle and Hirado Castle are firmly marketed to wealthy travelers, placing them out of the price range of the general populace. But Shimabara Castle, in Shimabara, Nagasaki Prefecture, offers an affordable alternative, with accommodation in a camper van close to the castle at just ¥8,800 per night for two people.

The van has two beds, air conditioning, and a refrigerator, with other camping equipment available to rent. Guests check in from 2:00 in the afternoon and have a leisurely stay until check-out time at 11:00 the following morning. There is also a recreational vehicle park, at ¥4,000 a night, for guests with their own vehicles.

The castle is lit up at night, providing a picturesque backdrop for campers. A popular activity is the torchlight castle tour, held mainly on Saturday nights. 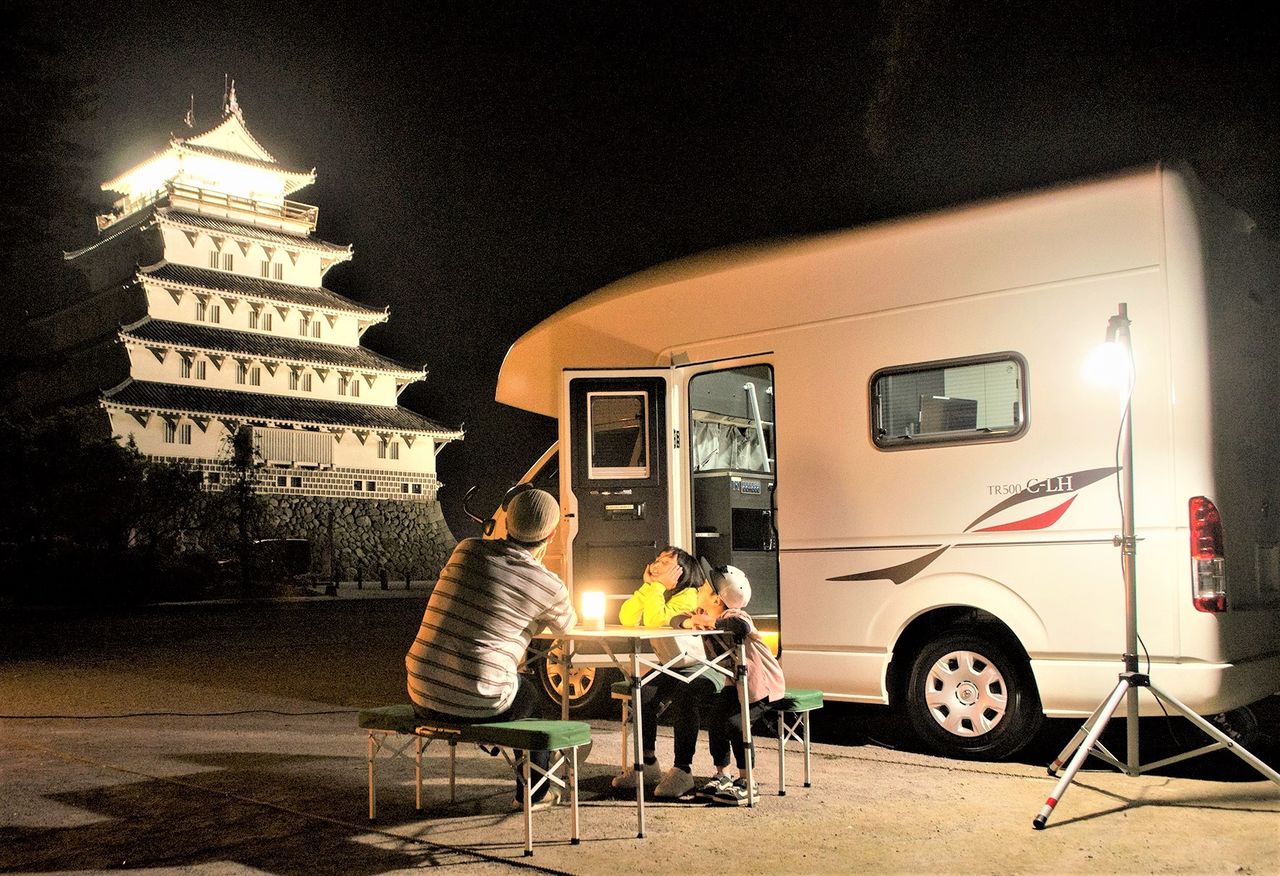 Built in 1618 by the famed builder Matsukura Bungonokami Shigemasa, the castle was pulled down under the Meiji government, but reconstructed in 1964, based on historical records. It is rare instance of a castle with car parking inside the keep. (Courtesy of the Shimabara Tourism Bureau)

Plans are underway to open castle-stays elsewhere, following the lead of Ōzu and Hirado.

This year, the city of Fukuyama is staging Fukuyama Castle Expo 2022 to mark the 400th anniversary of its castle. As part of the project, it is trialing a castle stay for three couples. The city hopes to introduce an official program in fiscal 2023, beginning in April next year, based on the outcome. Preparations are also underway to open Marugame Castle to guests in fiscal 2024. 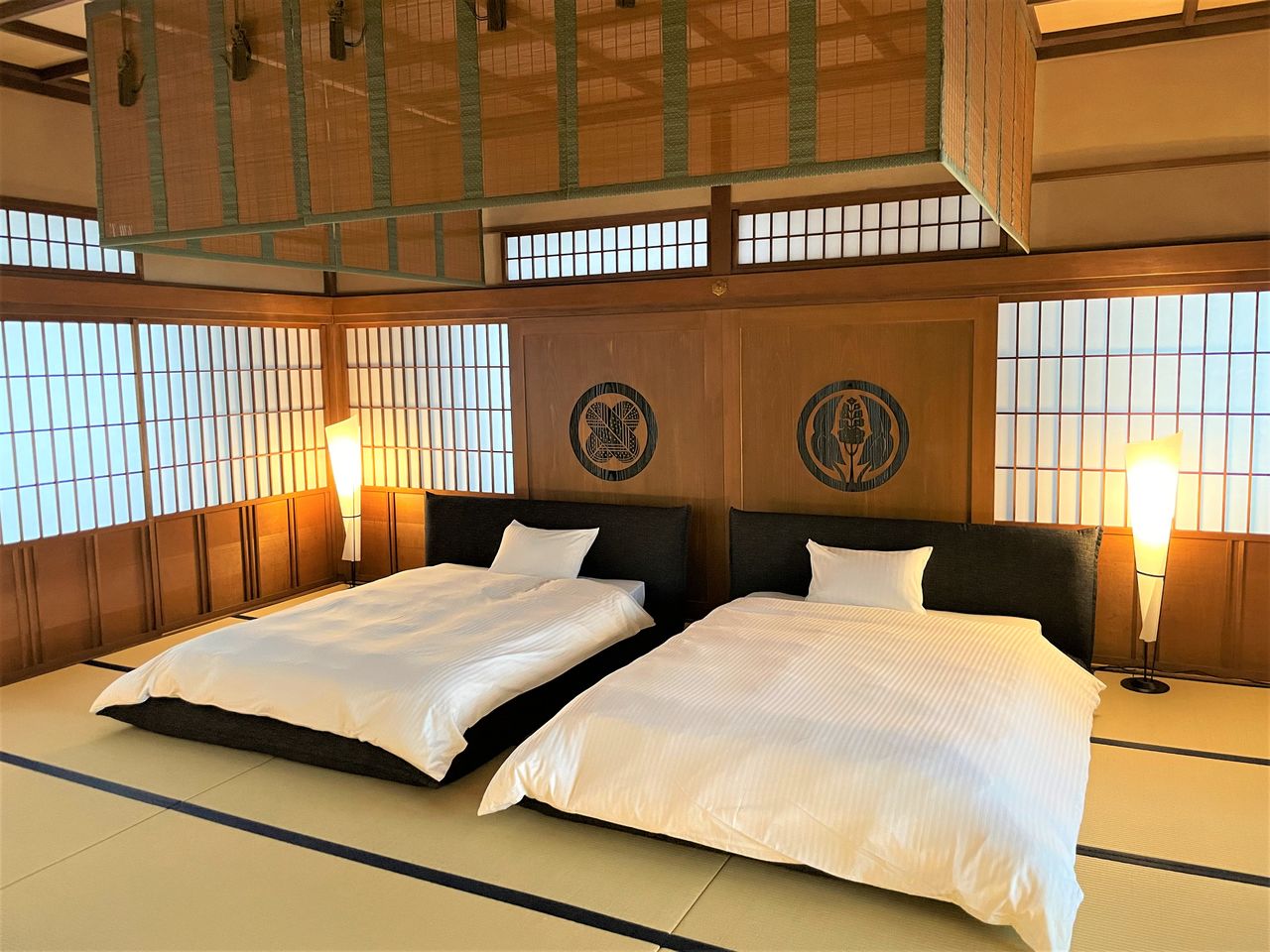 Guests will stay in the watchtower of Fukuyama Castle, sleeping in a spacious room on the second floor. The panels are adorned with the family crests of the area’s former feudal clans, Mizuno and Abe. (© Fukuyama Castle)

In the Edo period, Japan was known as the “kingdom of 300 domains”—according to some counts, 500 domains. Each developed its own culture and heritage, endowing the modern nation with valuable cultural properties across the country.

Albergo diffuso, the “scattered hotel,” is an innovative hospitality model operating in Italy. It incorporates converted rooms in existing historic buildings in castle towns and the like, operated with the aim of aiding regional development. Until recently, Japan was fixated on castle preservation, but is now beginning to follow the European precedent, adapting castles as tourist assets through public-private sector collaboration.

(Originally published in Japanese. Banner photo: The bedroom on the ground floor of Ōzu Castle. Guests can choose to sleep on futons or beds. Armor that belonged to Katō Sadayasu, the first lord of Ōzu, is on display alongside. © Value Management.)