Gender and Sex Oct 21, 2022
At an appearance in Tokyo, former US Secretary of State Hillary Clinton engaged in discussion about gender equality in an age of pandemic, conflict, and growing economic gaps.

On October 20, former US Secretary of State Hillary Clinton sat down for a dialogue with Nakamitsu Izumi, the United Nations under-secretary-general for disarmament affairs. Hundreds were in attendance for the conversation at the Sasakawa Peace Foundation building in Toranomon, central Tokyo, to hear the high-profile female leaders discuss the impact of COVID-19 on gender parity, the role of women in political and economic life, and ongoing conflicts around the world.

The discussants paid much attention to the impact of COVID-19, which figures largely among the complex challenges facing women as they seek to enhance their participation. “In 2020 alone, women around the world lost more than 64 million jobs,” noted Clinton, who added that World Economic Forum estimates of the number of years needed to achieve gender equality worldwide had been set back by generations due to the pandemic. COVID-19 has lowered the number of girls in education, from primary school up through university-level studies; the pandemic era has also seen global rises in maternal mortality.

Nakamitsu and Clinton both noted some high points in the recent history of the struggle for equality. The UN World Conference for Women held in Beijing in 1995 was “a turning point in the world’s fight for gender equality,” noted Clinton in her opening remarks, bringing together women from 189 countries to stress that “human rights are women’s rights, and women’s rights are human rights.” In 2000, the UN also passed resolution 1325, which urged increased participation of women in peace and security efforts and measures to protect women and girls from gender-based violence during conflict. 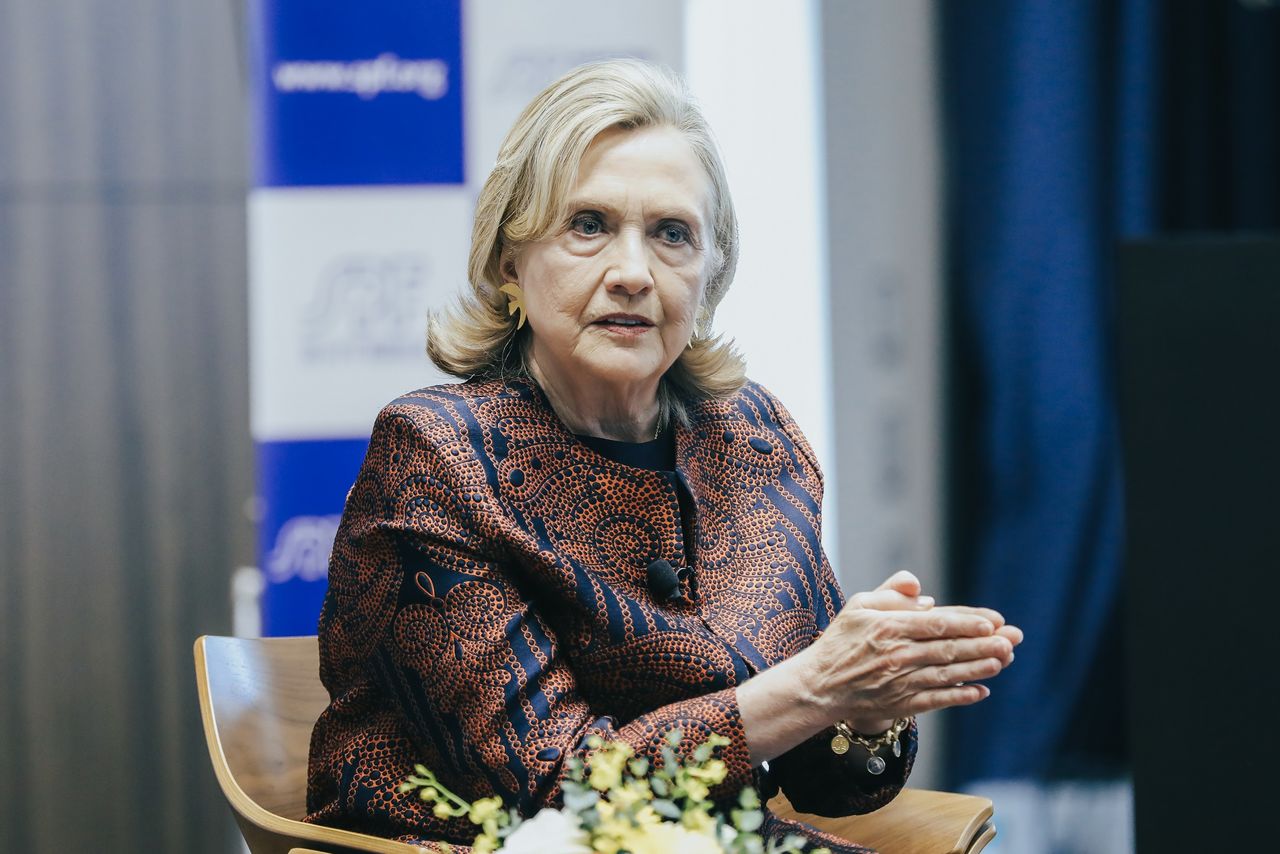 Former US Secretary of State Hillary Clinton speaks in Tokyo on October 20, 2022. (Courtesy of the Sasakawa Peace Foundation)

Even these moves, though, sparked pushbacks in many quarters of the globe, which Nakamitsu noted was today the scene of many conflicts where sexual violence is once again being deployed as a weapon of war. The two touched on situations in Afghanistan, where Taliban rule is preventing girls from accessing education; in Myanmar and Ukraine, where armed forces are resorting to rape; and in Iran, where youth protests have erupted over hijab requirements,

Taken as a whole, agreed Nakamitsu and Clinton, these developments indicate a world where democracy and autocracy are increasingly pitted against one another. This struggle extends into the digital realm: On the one hand, said Clinton, China is using technology to build the world’s most powerful surveillance state, while in many Western countries, the online world has become a place where all control has been lost, and users—frequently women—are exposed to harsh, misogynistic treatment that is written off as “free speech.” Moves by European regulators, she noted, could provide a path forward to an ideal situation between these two extremes.

Women the Key to Growth

Clinton noted that she had served as secretary of state at the same time that Kishida Fumio, today prime minister, was her counterpart as Japan’s minister for foreign affairs. More than Kishida, though, it was the late Abe Shinzō who figured largely in her comments. She recalled that he had contacted her to ask for more input following her speech at an APEC gathering, in which she argued that ensuring women’s full participation in the economic sphere could spark tremendous GDP growth in every economy around the world. While Japan has not moved swiftly enough to bring about this parity, as Nakamitsu was quick to point out, women’s unfettered economic participation remains a key to bringing Japan’s economy back to vigor.

“Japan is a highly productive country,” said Clinton, “but its productivity and economic growth could be even greater with a plan to integrate more women into the workforce.” Japan has all the tools it needs to do this, she added, noting that if the country could tackle both the cultural signals that kept some women from the workforce and the structural issues (including, primarily, the availability of quality childcare so women could go back to work) it would see remarkable progress.

Women’s participation in politics, too, was something both participants looked forward to. Clinton remarked that she had spoken with Ukrainian First Lady Olena Zelenska in New York recently, and was struck by the way that while men, like her husband President Volodymyr Zelenskyy, ask for help in the form of more military equipment to defend against Russia’s invasion, women are more likely to focus on the needs of civilians, asking for equipment for intensive maternal, neonatal, and other medical care. The greater a role women play in politics, she argued, the more they will bring their valuable perspectives to bear.

As for her own role in politics, Clinton earned laughter with a brisk “No!” when asked whether she planned to run for president again. But as Nakamitsu said, bringing about gender parity in the political sphere “is not just the right thing to do, but the smart thing to do as well.” Clinton agreed wholeheartedly, expressing her hope that she would see a woman in the White House “hopefully while I’m around to vote for her.”