Society May 1, 2020
Efforts to tackle the COVID-19 outbreak, including the declaration of a nationwide state of emergency, were among Japan’s biggest stories in April 2020.

Prime Minister Abe Shinzō announces government plans to distribute two cloth masks each to all of the more than 50 million households nationwide as part of efforts to contain the COVID-19 outbreak.

The Ministry of Health, Labor, and Welfare says it has advised prefectural governments that asymptomatic COVID-19 patients and those with mild symptoms can recover at homes or hotels rather than being hospitalized.

British-born writer and environmental activist C. W. Nicol, who became a Japanese citizen in 1995, dies at the age of 79.

The government adopts a ¥108 trillion economic stimulus package, equivalent to around 20% of Japan's gross domestic product. This includes ¥39.5 trillion in direct fiscal spending.

Prime Minister Abe declares a state of emergency aimed at containing the COVID-19 outbreak in Tokyo and six other prefectures. The emergency is to last until May 6.

Tokyo Governor Koike Yuriko announces details on what businesses will be asked to close or shorten opening times during the state of emergency. 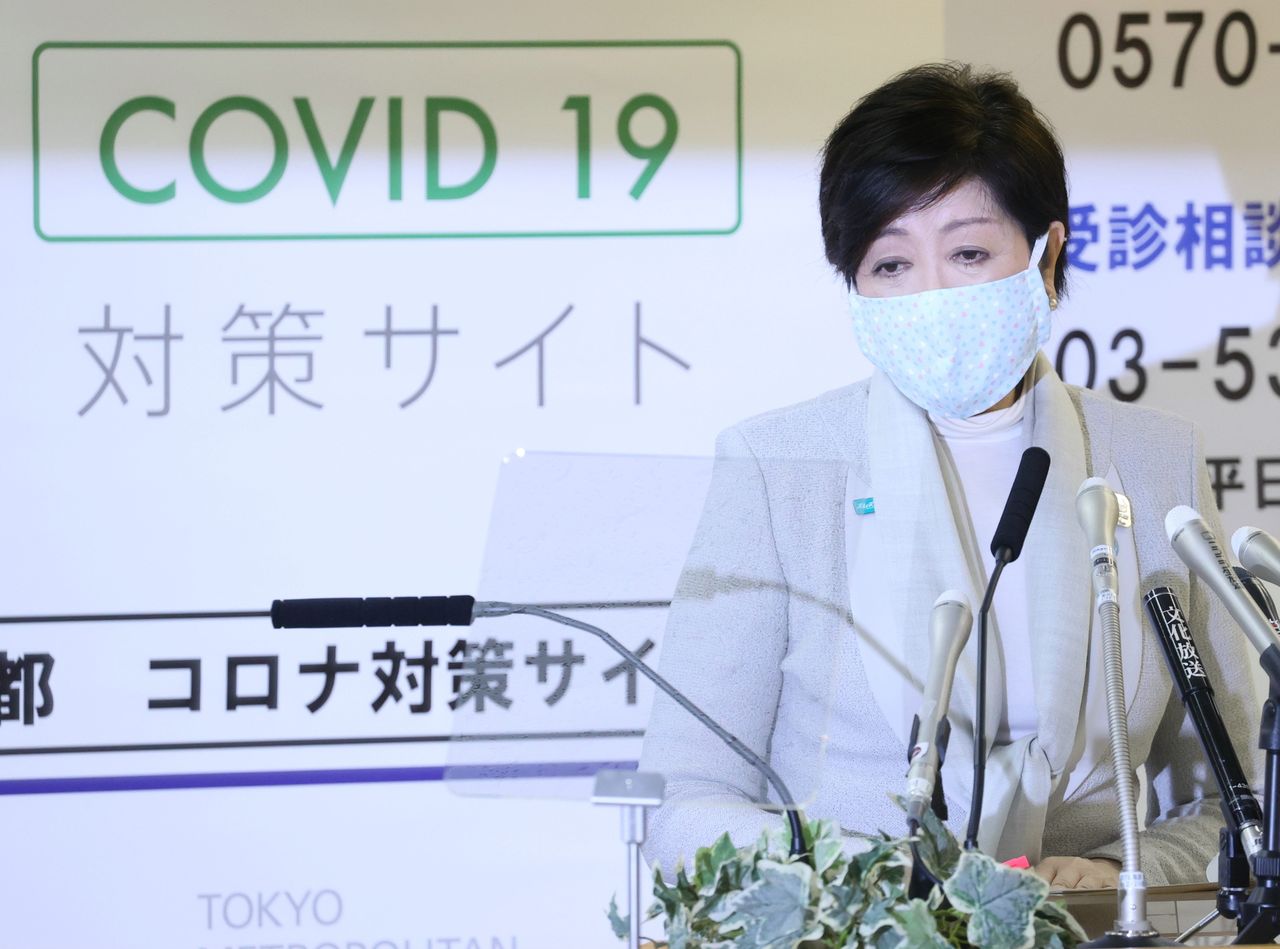 Ōbayashi Nobuhiko, best known internationally as the director of the cult film House, dies in Tokyo at the age of 82.

Softbank Group forecasts a ¥750 billion net loss for the year ended March 2020, having recorded huge losses through its Vision Fund and investments in other companies. On April 30, it revises the figure upward to ¥900 billion.

The Ministry of Internal Affairs and Communications announces that Japan’s population as of October 1, 2019, was 126.2 million, having fallen for the ninth consecutive year.

The Japan National Tourism Organization reports that an estimated 193,700 visitors came to the country in March, down a record 93% year on year.

Prime Minister Abe expands the state of emergency to cover the whole country until May 6. He also decides to rewrite the supplementary budget in line with coalition partner Kōmeitō’s wish to give ¥100,000 in cash to all individual residents, rather than ¥300,000 to households that have suffered a loss in income. 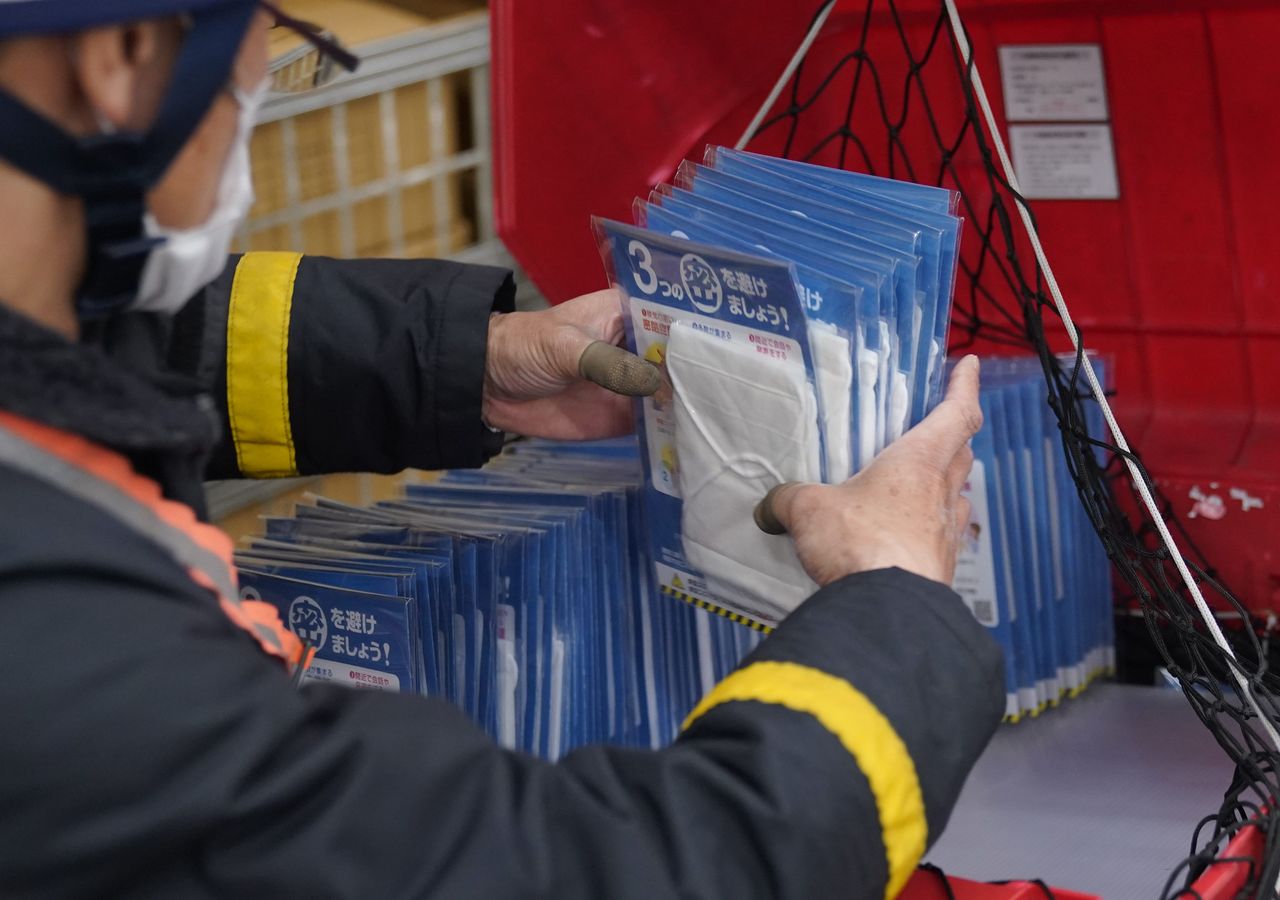 A post office worker packs some of the masks to be sent to all Japanese households into a motorcycle delivery box in Setagaya, Tokyo, on April 17. (© Jiji)

The number of COVID-19 cases reported in Japan rises above 10,000. This figure excludes the cases on the Diamond Princess cruise ship.

The cabinet adopts its supplementary budget for fiscal 2020, including a ¥100,000 payment per person. General account spending under the revised budget is ¥25.7 trillion. It is approved in the Diet on April 30.

At his first hearing in the Hiroshima District Court, Tatemichi Hiroshi, a state-paid secretary of Liberal Democratic Party lawmaker Kawai Anri, refuses to enter a plea on alleged violation of election laws. He is accused of having made payments above the legal limit to campaign workers during Kawai’s successful July 2019 bid for election to the House of Councillors.

The Cabinet Office releases an estimate from an expert panel that an earthquake measuring 7 on the Japanese intensity scale in the Japan Trench or Kuril Trench could cause tsunami up to 30 meters high in Hokkaidō or Iwate Prefecture.

The government’s monthly economic report for April revises downward the assessment for March, stating that the economy “is getting worse rapidly in an extremely severe situation” due to the COVID-19 outbreak.

Actress Okae Kumiko dies in a Tokyo hospital at the age of 63 of pneumonia caused by COVID-19.

The Bank of Japan holds a policy meeting and announces that it has decided on further monetary easing. It scraps its annual upper limit of ¥80 trillion for purchases of government bonds, stating an intention to actively buy them up.

Prime Minister Abe indicates his intention to extend the COVID-19 state of emergency beyond May 6, telling reporters it will be difficult to return to normal life on May 7, and that people should prepare for some degree of a test of endurance.

(Originally published in Japanese. Banner photo: Following the announcement of a state of emergency, many shops are closed on Asakusa’s Nakamise arcade in Tokyo on April 8, 2020. © Jiji.)