Society Jun 1, 2020
The lifting of the state of emergency, declared nationwide in April, was one of Japan’s main stories in May 2020.

Prime Minister Abe Shinzō extends the nationwide COVID-19 state of emergency until May 31.

The Nihon Sumō Kyōkai (Japan Sumō Association) announces the cancellation of the summer tournament in Tokyo that had been scheduled to begin on May 24.

The Ministry of Internal Affairs and Communications announces that as of April 1, the population of children under 15 years old is an estimated 15.1 million, having fallen by around 200,000. The total drops for the thirty-ninth consecutive year.

The Ministry of Health, Labor, and Welfare approves the antiviral drug remdesivir for use with COVID-19 patients. It is Japan’s first approved COVID-19 treatment.

Kyoto City Archaeological Research Institute announces the discovery of a stone wall and moat of Kyoto Shinjō castle, thought to have been built by the warlord Toyotomi Hideyoshi in his later years. It is the first part of the castle to have been discovered. 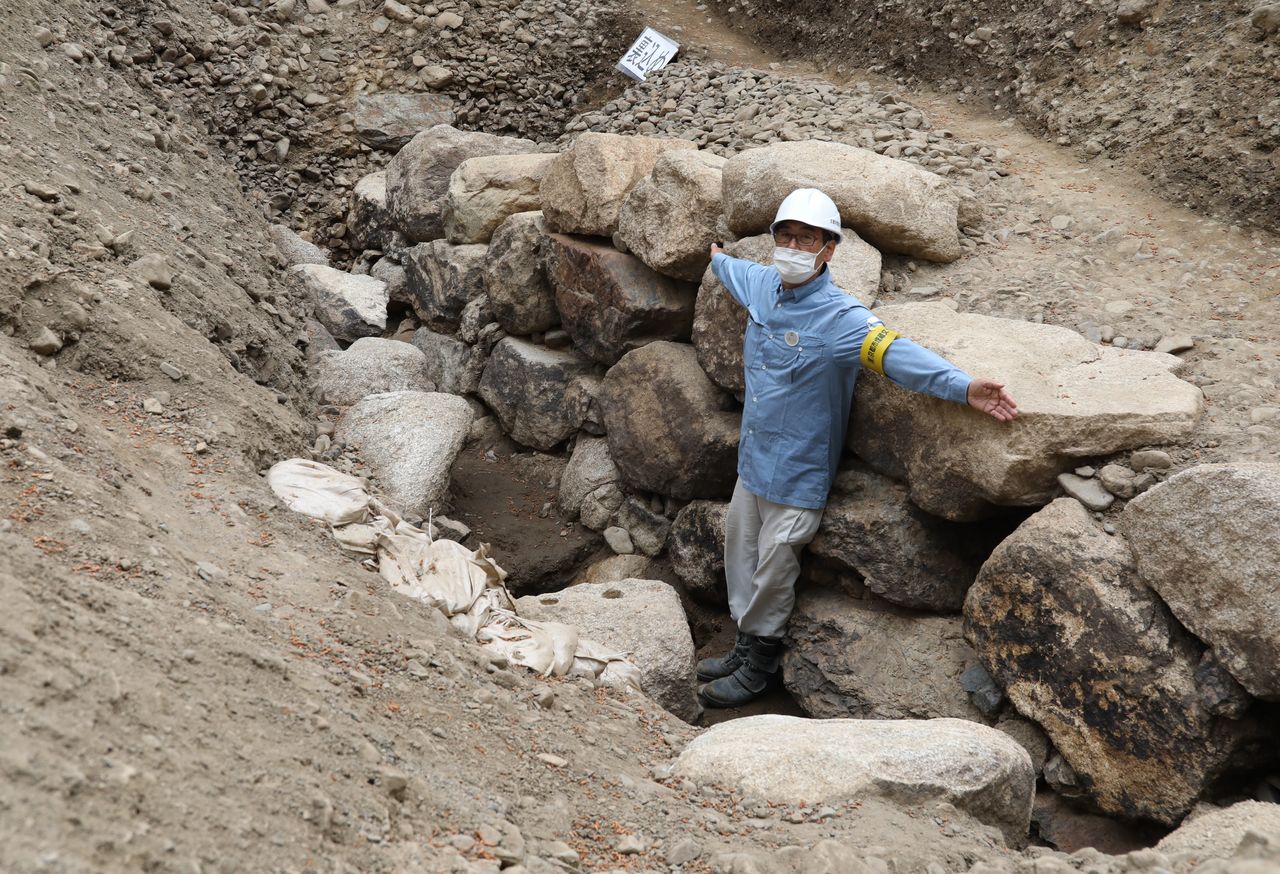 Toyota announces that its consolidated operating profit for the year ending March 2021 is expected to drop by 79.5% to ¥500 billion.

The government lifts the state of emergency in 39 prefectures, based on standards including the target of 0.5 or fewer total cases per 100,000 people over the past week. 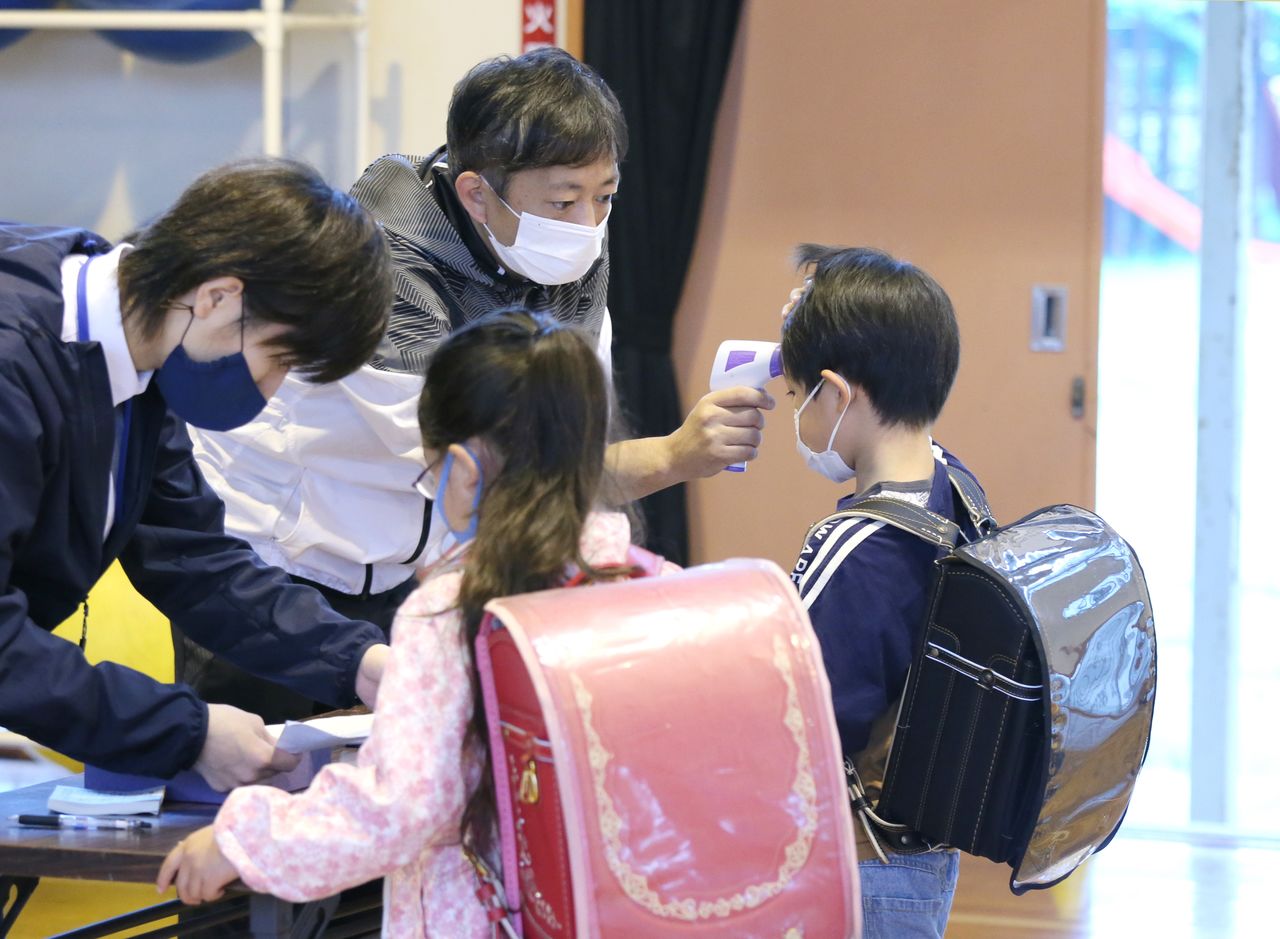 As staggered school attendance begins, staff members take children’s temperatures before they enter the classroom in Kitakyūshū, Fukuoka Prefecture on May 18, 2020. (© Jiji)

The Cabinet Office releases its preliminary GDP figures for the first quarter of 2020. The economy shrank by 0.9%, or 3.4% on an annualized basis.

Tatemichi Hiroshi, a state-paid secretary of Liberal Democratic Party lawmaker Kawai Anri, admits to having violated election laws during the July 2019 House of Councillors election at his second hearing at the Hiroshima District Court.

The Japan National Tourism Organization reports that overseas visitors to Japan in April 2020 fell by 99.9% from the previous year to 2,900. It is the first time the figure has fallen below 10,000 since statistics were first kept in 1964.

The government lifts the state of emergency in Osaka, Kyoto, and Hyōgo Prefectures.

Kurokawa Hiromu, head of the Tokyo High Public Prosecutors Office, resigns after admitting playing mah-jongg for money with newspaper reporters during the state of emergency. 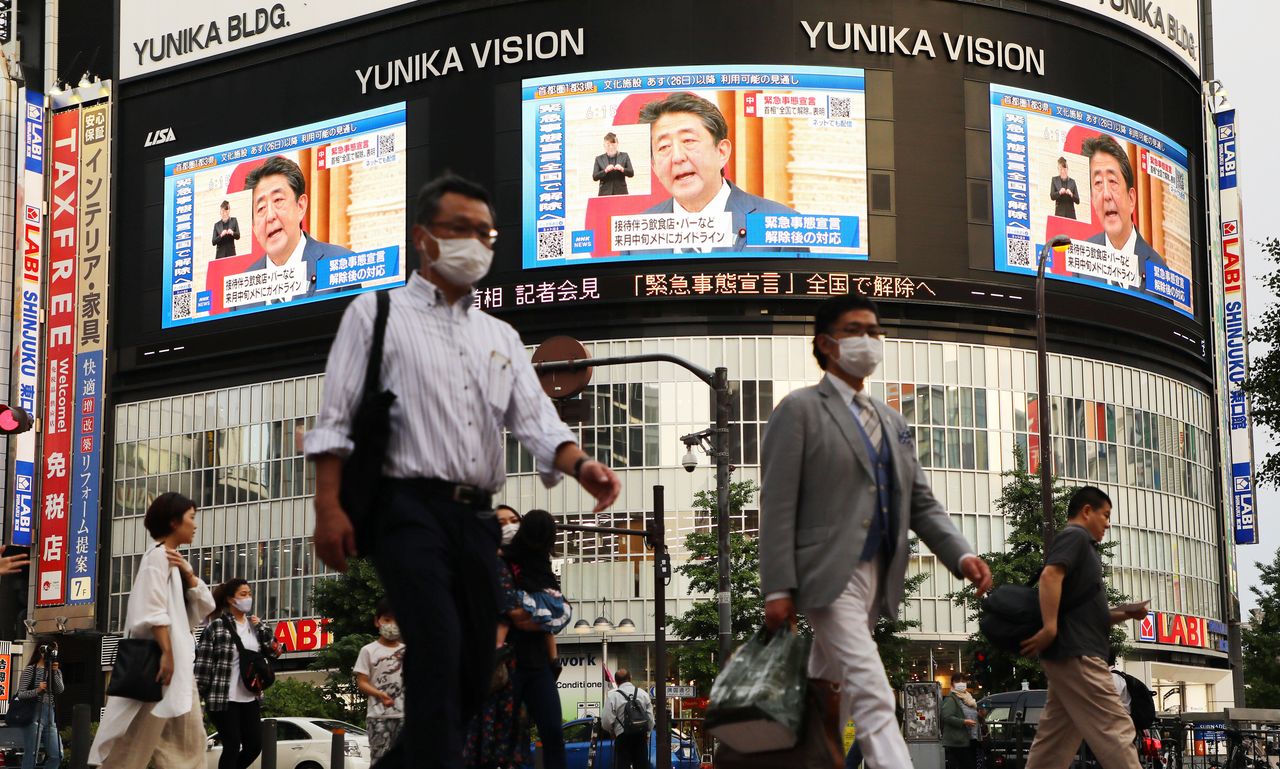 Minister of Health, Labor, and Welfare Katō Katsunobu says the government will not approve the drug Avigan during May as there is insufficient data on its efficacy as a COVID-19 treatment.

The Kyoto Prefectural Police arrest Aoba Shinji for an arson attack at a Kyoto Animation studio that killed 36 people in July 2019, judging that he has recovered enough from his injuries to go into custody.

The government approves a second supplementary budget for fiscal 2020 with measures related to the COVID-19 outbreak. It amounts to ¥31.9 trillion, raising the overall stimulus package to ¥117.1 trillion.

Contrail wins the Japanese Derby, which is held without spectators at the Tokyo Racecourse in Fuchū, Tokyo, and remains on course to take the Japanese triple crown after also finishing first in the Satsuki Shō in April.