Society Sep 1, 2020
Prime Minister Abe Shinzō’s announcement that he intends to resign was the big story of August 2020 in Japan.

The Japan Meteorological Agency announces the end of rainy season in the Kantō Kōshin and Tōkai regions. Both come 8 days later than 2019 and 11 days later than an average year.

The Kabukiza theater in Tokyo reopens with its first performance in five months after closing to prevent the spread of COVID-19. 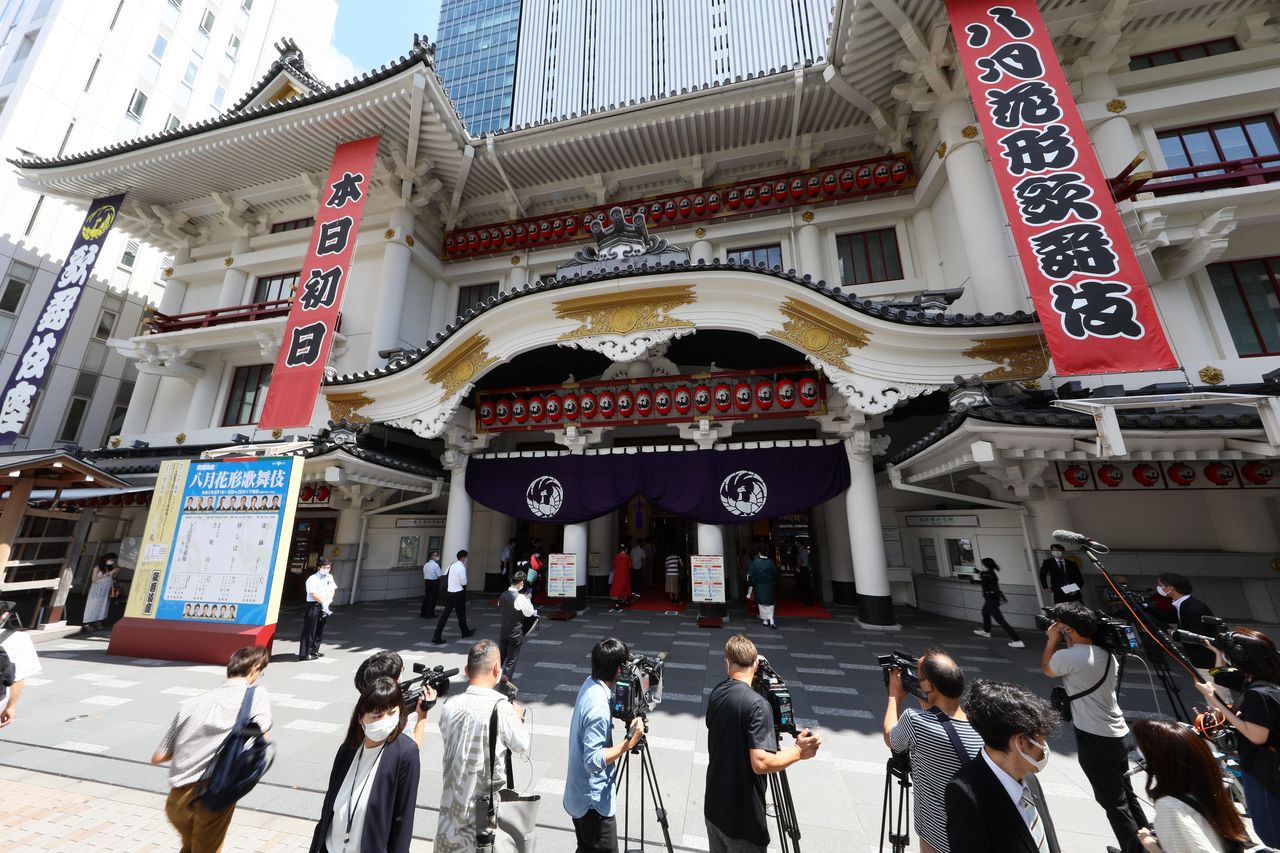 The Ministry of Internal Affairs and Communications announces that as of January 1, 2020, Japan had 124,271,318 citizens, a drop of 505,046 (0.40%) from the previous year. This is the largest-ever decrease in the eleventh consecutive year of decline.

Hiroshima marks 75 years since the atomic bombing of the city with a ceremony in its Peace Memorial Park. Due to the COVID-19 crisis, there are fewer than 10% of the usual number of participants. On August 9, Nagasaki holds a ceremony on the anniversary of its bombing.

A special baseball event is held at the Hanshin Kōshien Stadium in Nishinomiya, Hyōgo Prefecture, bringing together the 32 teams that had been selected for the canceled spring invitational tournament for one game each. 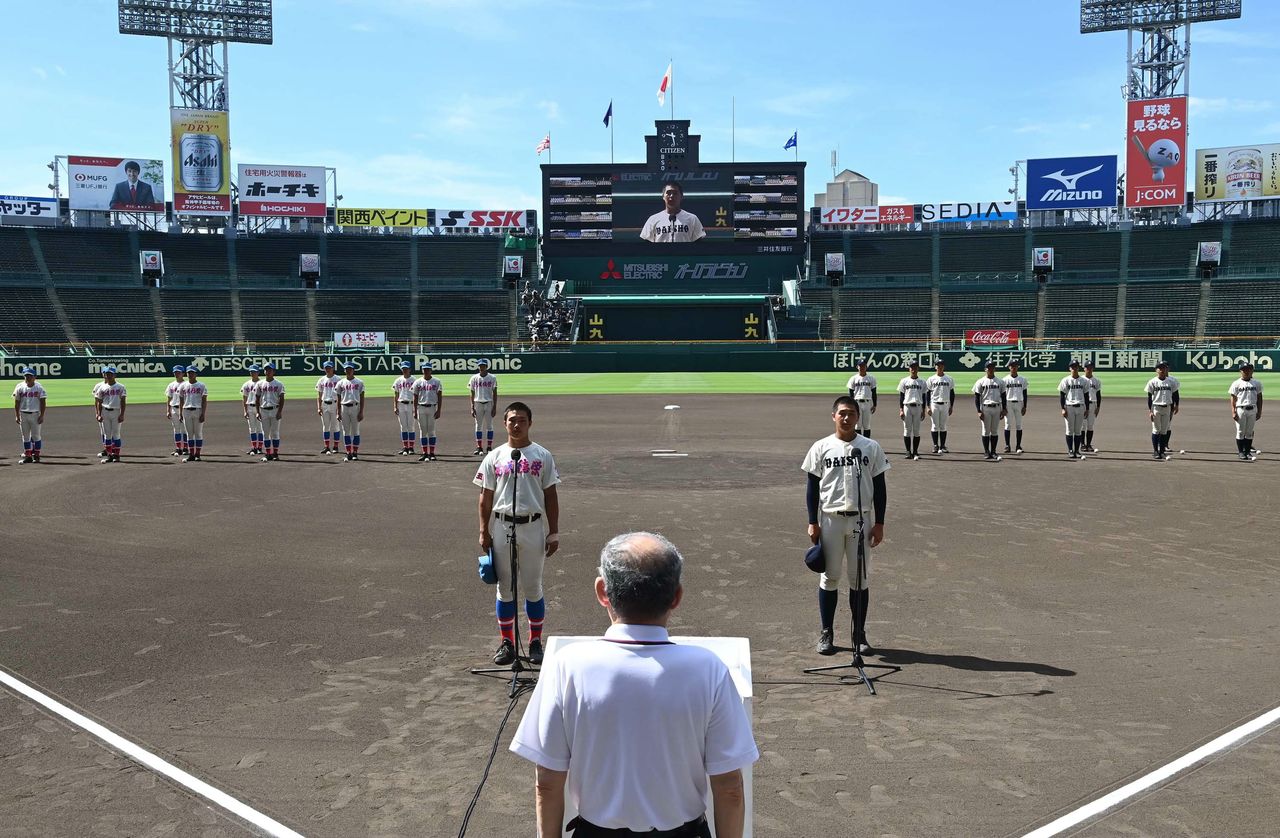 The actor Watari Tetsuya dies of pneumonia at the age of 78.

The central government and Hiroshima prefectural and municipal governments file an appeal against the recent court ruling that recognized additional victims of the radioactive “black rain” that fell after the atomic bombing.

A ceremony is held at Ueno, Gunma Prefecture, to mark the thirty-fifth anniversary of the 1985 crash of Japan Airlines flight 123, which killed 520 people.

Okinawa Prefecture raises its COVID-19 alert to the highest of four levels and extends its state of emergency until August 29.

An official ceremony is held in Tokyo to mark 75 years since the end of World War II. 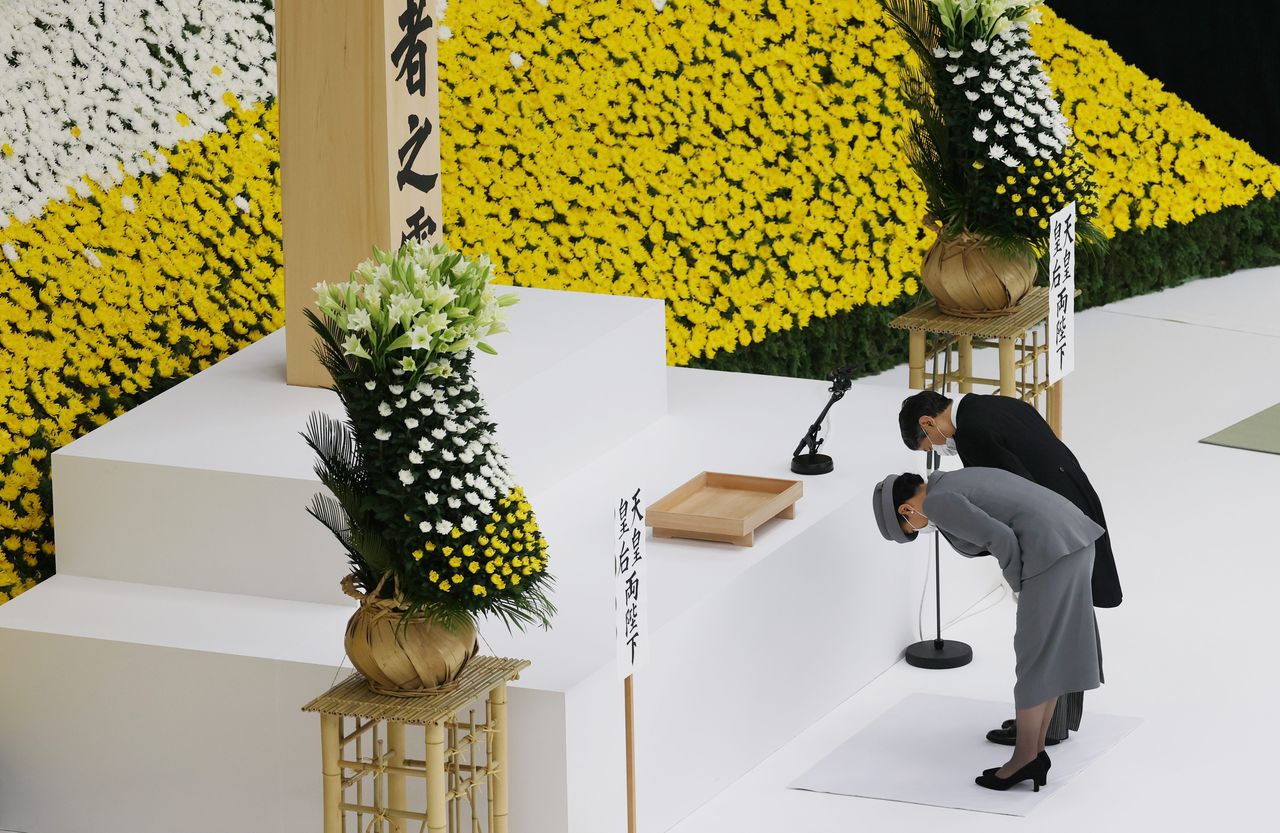 Emperor Naruhito and Empress Masako bow at the National Memorial Service for the War Dead in Tokyo on August 15, 2020. (© Jiji)

Prime Minister Abe Shinzō spends seven and a half hours having a medical checkup at Keiō University Hospital. He visits the same hospital on August 24 for what Chief Cabinet Secretary Suga Yoshihide describes as an additional checkup.

Japan’s GDP drops by an annualized 27.8% in the second quarter of 2020, due to the COVID-19 crisis. This is the largest postwar decrease.

Hamamatsu, Shizuoka Prefecture, records a temperature of 41.1º Celsius at ten minutes after noon, according to the Japan Meteorological Agency. This equals the highest ever temperature in Japan, previously reported in Kumagaya, Saitama Prefecture, on July 23, 2018.

Fujii Sōta becomes the youngest holder of two major shōgi titles by winning the Ōi title at the age of 18 years, 1 month.

Former Vice Speaker of the House of Representatives Watanabe Kōzō dies at the age of 88.

Former Justice Minister Kawai Katsuyuki and his wife Anri, both current lawmakers, plead not guilty over a vote-buying scandal related to her 2019 House of Councillors election campaign.

Tennis player Ōsaka Naomi initially withdraws from the Cincinnati Masters as part of a strike by athletes protesting against the police shooting of African-American Jacob Blake in Kenosha, Wisconsin. When her semifinal match is rescheduled from August 27 to 28, she agrees to play.

Prime Minister Abe announces his intention to resign, saying that a recurrence of his chronic ulcerative colitis has made it difficult for him to continue in his position.