Society Mar 1, 2021
In February 2021, Japan’s COVID-19 state of emergency was extended until March, and former Prime Minister Mori Yoshirō resigned as president of the Tokyo Olympics and Paralympics organizing committee.

Tōyama Kiyohiko, a member of junior coalition partner Kōmeitō, resigns as a House of Representatives lawmaker after it came to light that he made a late-night visit to a Ginza club during the COVID-19 state of emergency. In the Liberal Democratic Party, it is found that Matsumoto Jun, former chairman of the National Public Safety Commission, was accompanied by Tanose Taidō, state minister of education, and Otsuka Takashi, deputy head of the parliamentary affairs committee, on a separate Ginza club visit. All three resign from the LDP.

The government decides to extend the state of emergency until March 7 in 10 of the 11 prefectures where it is ongoing (excluding Tochigi).

The Ministry of Health, Labor, and Welfare announces that the Android version of its COVID-19 tracing app Cocoa has been defective since late September 2020, failing to issue warnings that users have possibly been in close contact with infected people.

Kawai Anri resigns as a House of Councillors lawmaker after being found guilty of buying votes during her election campaign in Hiroshima Prefecture. She makes no appeal and the verdict is finalized the following day.

The Diet enacts a bill revising laws to increase the effectiveness of Japan’s COVID-19 response. They come into force on February 13, and include measures allowing prefectural governors to impose fines of up to ¥300,000 on businesses that do not comply with orders to shorten operating hours or close during a state of emergency.

The Ministry of Internal Affairs and Communications announces the results of a survey on household spending in 2020, which found that the average outlay for a household (of two people or more) was ¥277,926. Excluding the effects of price changes, this was an effective year-on-year drop of 5.3%, or the greatest ever decrease since comparable statistics became available in 2001.

Two Chinese coast guard ships enter Japanese territorial waters off the Senkaku Islands. They attempt to approach Japanese fishing vessels, but a Japan Coast Guard ship warns them to leave. Following the passing of a new Chinese law allowing its coast guard ships to use weapons, nine such intrusions take place as of February 22.

Regulators impose a 116-day business suspension on pharmaceutical company Kobayashi Kako after it sold a dermatological medicine contaminated with sleep-inducing components, causing at least one death. The suspension, which runs until June 5, is the longest to be imposed under the Pharmaceutical and Medical Device Act.

Toyota raises its net income forecast for the fiscal year ending March 2021 from ¥1.4 trillion to ¥1.9 trillion, and its predicted operating profit by more than 50%.

An earthquake at 11:07 pm centered off Fukushima Prefecture causes shaking of upper 6 on the Japanese seismic intensity scale in Sōma in Fukushima Prefecture, Zaō in Miyagi Prefecture, and other municipalities. The Japan Meteorological Agency said that the hypocenter was around 55 kilometers below the surface, and the temblor had an estimated magnitude of 7.3. After a period of disruption, the Tōhoku Shinkansen resumes services on all sections on February 24. 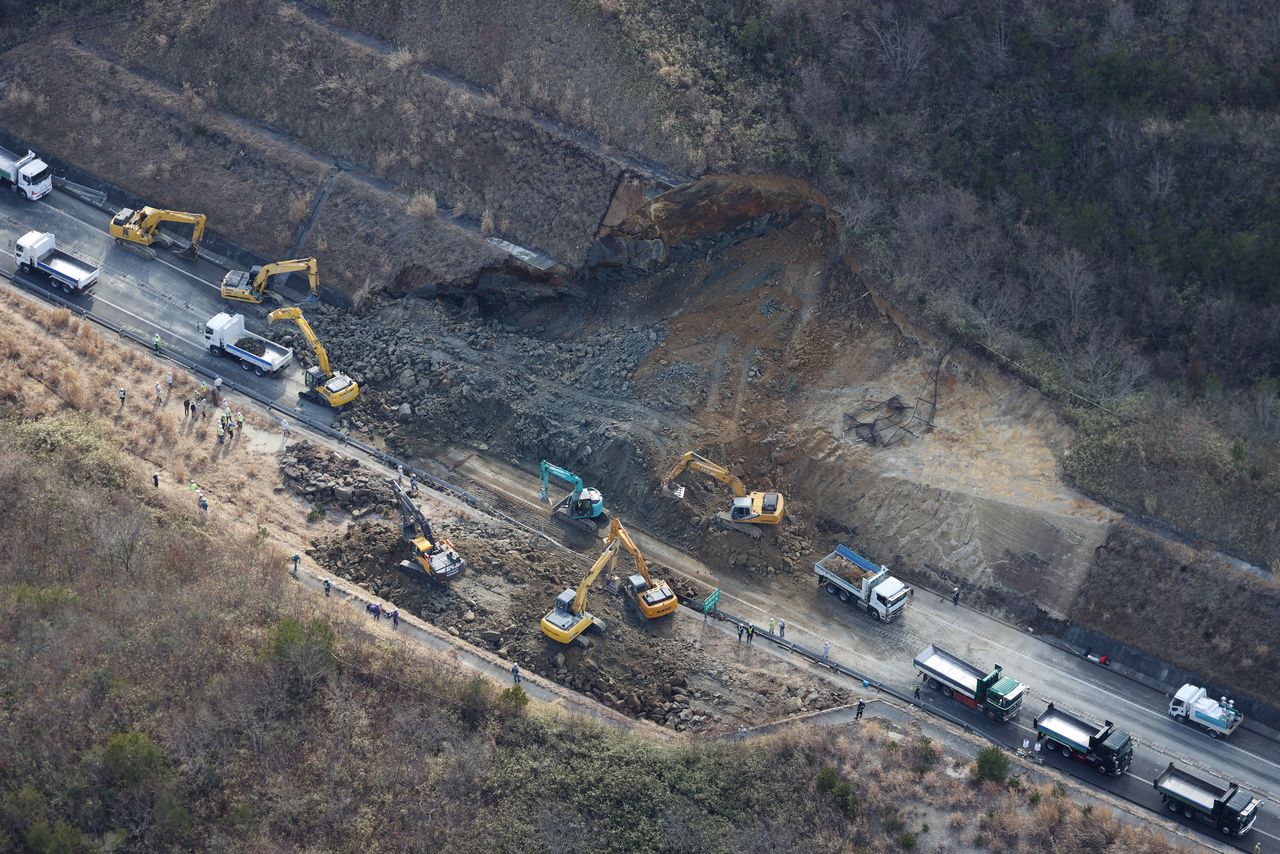 The Jōban Expressway in Sōma, Fukushima Prefecture, pictured on February 14, 2021, after the previous day’s earthquake caused a landslide. (© Jiji)

The Cabinet Office releases its preliminary GDP figures for the fourth quarter of 2020. The economy grows by 3.0%, or 12.7% on an annualized basis, for a second successive quarter of positive growth.

COVID-19 vaccination begins in Japan, starting with around 400,000 medical workers at hospitals across the country. 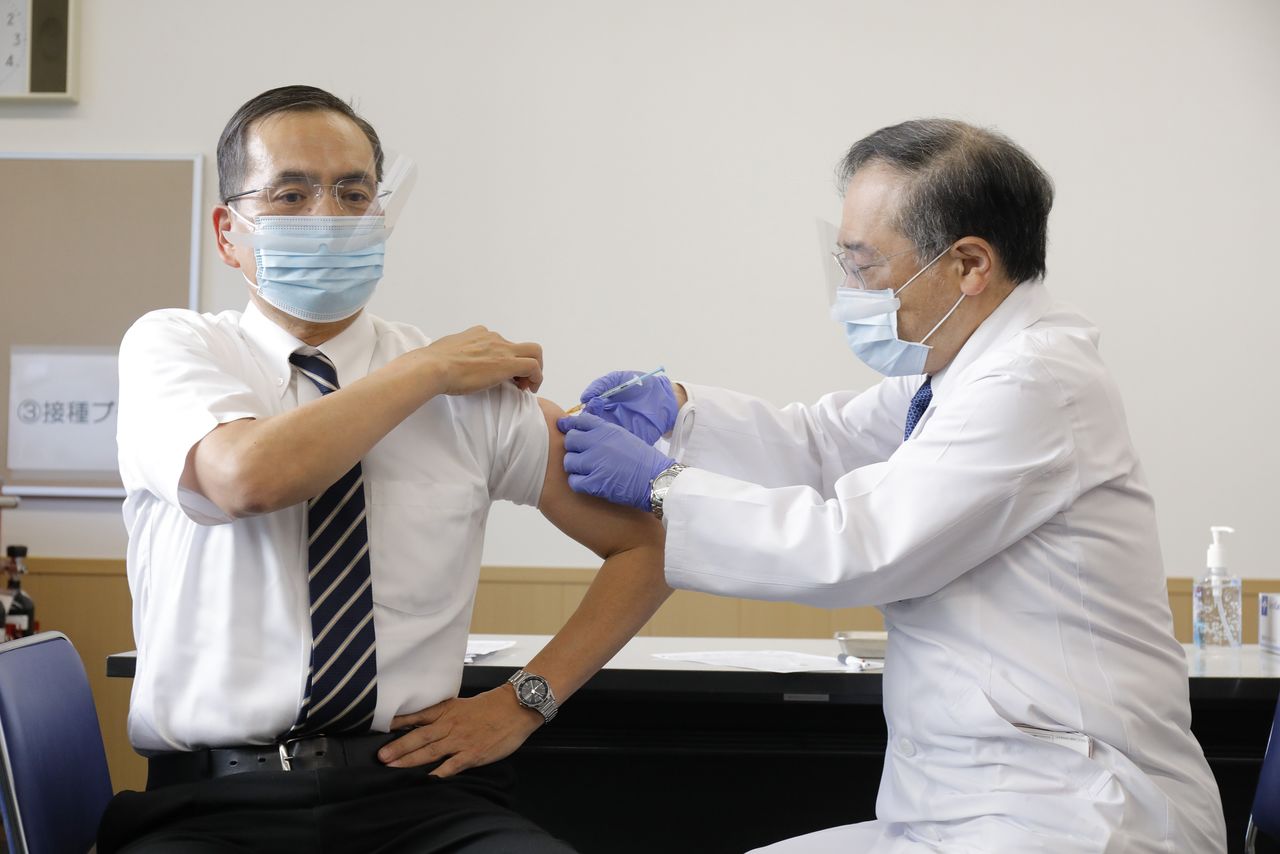 The Ministry of Foreign Affairs and Ministry of Defense announce the agreement of a one-year extension to the pact on Japan’s host-nation support for US bases, maintaining Japan’s annual costs at ¥200 billion.

Ōsaka Naomi wins the Australian Open women’s singles final, defeating Jennifer Brady of the United States (6–4, 6–3) to claim victory in the tournament for the second time. 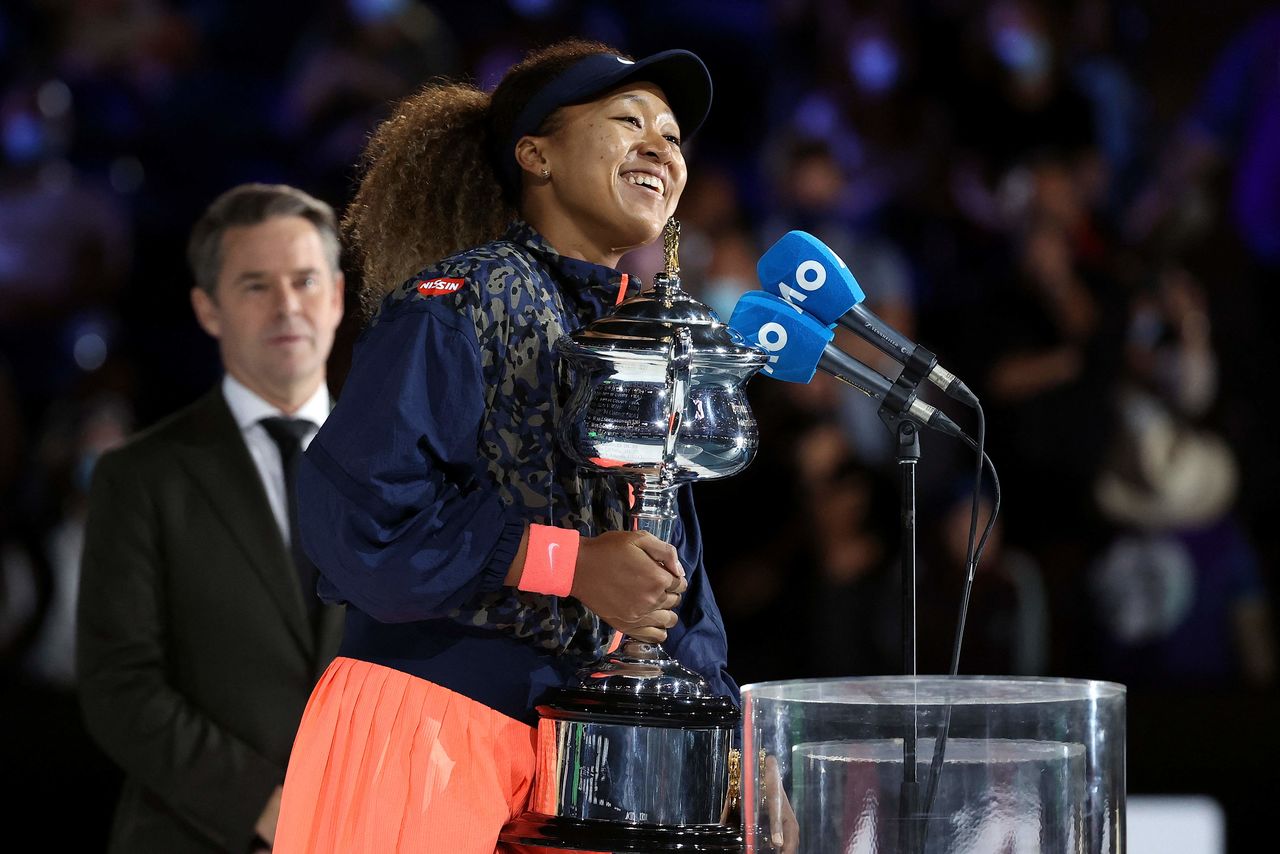 Ōsaka Naomi gives a speech after her Australian Open triumph in Melbourne on February 20, 2021. (© AFP/Jiji)

A wildfire breaks out in Ashikaga, Tochigi Prefecture. Firefighting efforts by helicopter seek to contain it, but it spreads to scorch 106 hectares by February 26. As of February 28, the fires are largely contained, but evacuation advisories have been issued to 305 households.

The Ministry of Internal Affairs and Communications punishes 11 officials for ethics code violations after they were wined and dined by Suga Seigō, the eldest son of Prime Minister Suga Yoshihide, who works for a media production company.

The Ministry of Agriculture, Forestry, and Fisheries punishes Vice Minister Edamoto Masaaki and five other officials after it emerged that they were treated to lavish dinners by an egg production company under investigation for bribing Yoshikawa Takamori, the former minister.

The government lifts the ongoing state of emergency in Aich, Gifu, Osaka, Kyoto, Hyōgo, and Fukuoka, but it remains in place in the capital-region prefectures of Tokyo, Kanagawa, Saitama, and Chiba.

(Originally published in Japanese. Banner photo: Mori Yoshirō, at center, apologizes for sexist remarks and resigns as president of the Tokyo Olympics and Paralympics organizing committee on February 12, 2021. © Jiji.)