Society Apr 1, 2021
In March 2021, Japan marked the tenth anniversary of the Great East Japan Earthquake and saw the start of the Olympic torch relay.

Tokyo prosecutors arrest former US Green Beret Michael Taylor and his son Peter on suspicion of illegally harboring former Nissan Chairman Carlos Ghosn and helping him flee Japan to Lebanon. The pair were extradited from the United States.

Minister of Internal Affairs and Communications Takeda Ryōta announces that Taniwaki Yasuhiko has been removed from the position of vice minister for policy coordination after Taniwaki had been repeatedly entertained by companies in violation of a government employees ethics code. Taniwaki resigns from the ministry on March 16.

Japan marks the tenth anniversary of the Great East Japan Earthquake. An official ceremony is held at the National Theater in Tokyo for the first time in two years, after the 2020 event was canceled due to the spread of COVID-19. This is the last official ceremony for the disaster to be organized by the national government. 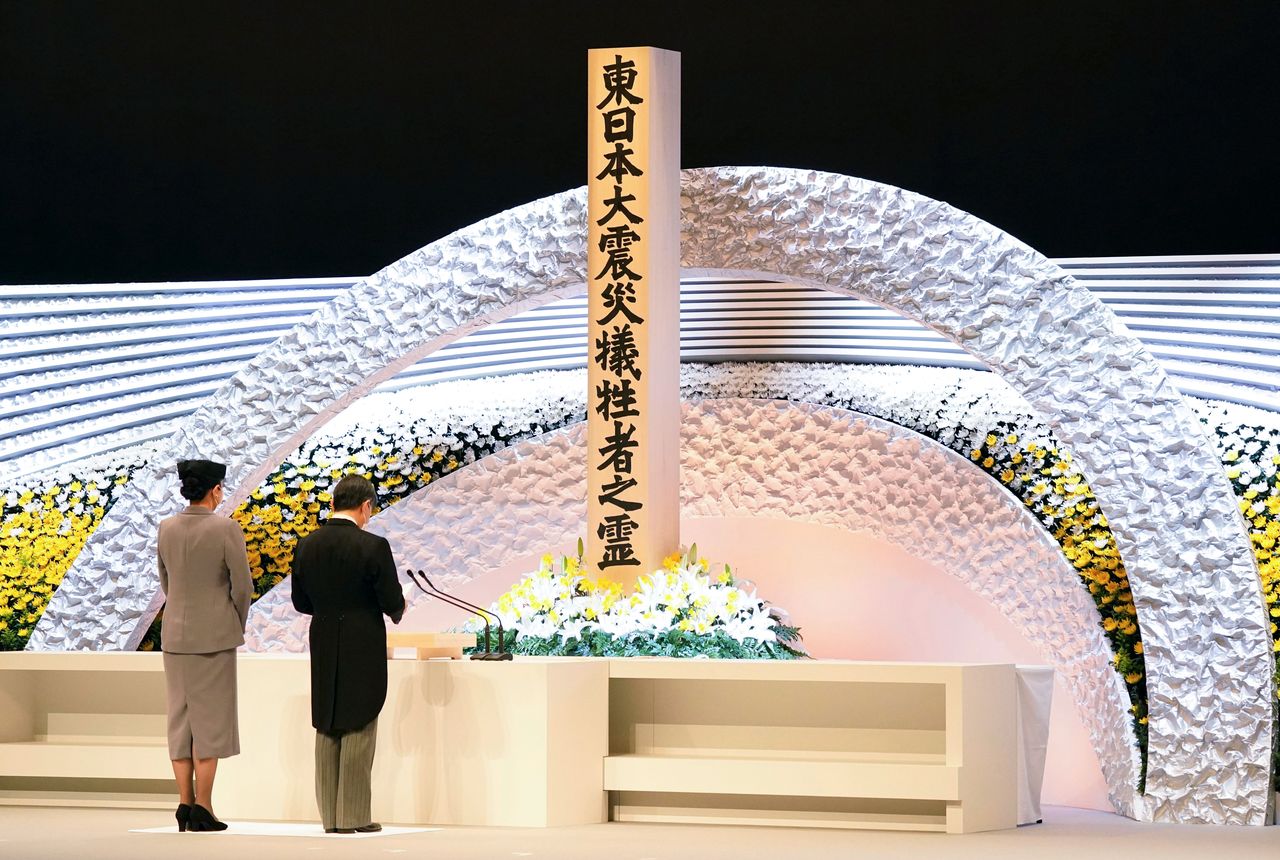 Emperor Naruhito gives a speech alongside Empress Masako at the official ceremony on March 11, 2021, marking 10 years since the Great East Japan Earthquake. (© Jiji)

Japan Post and Rakuten announce that they have agreed to a capital and business tie-up. Japan Post will acquire an 8.32% share in Rakuten through third-party allotment. The ¥150 billion investment will help fund improved logistics through digital technologies, along with Rakuten’s expansion of its mobile phone business.

Leaders of the Quad countries—Japan, the United States, Australia, and India—hold their first summit online. They make a joint statement pledging to work together to supply COVID-19 vaccines to developing countries and tackle climate change.

At two-plus-two security talks between Japan and the United States, held in Tokyo, the countries’ heads of foreign affairs and defense make a joint statement expressing serious concerns over China’s Coast Guard Law, which allows its coast guard to fire on foreign vessels.

Sapporo District Court rules that the failure to recognize same-sex marriage is in violation of Article 14 of the Constitution, which states that “all of the people are equal under the law.” The ruling comes in a case brought by three same-sex couples against the national government.

Line announces that personal information related to users of its messaging app was accessible to system engineers at its Chinese subsidiary. On March 31, investigators from the government’s Personal Information Protection Commission visit Line and its parent company Z Holdings to conduct on-site inspections.

The Japan High School Baseball Federation national spring invitational tournament begins at the Hanshin Kōshien stadium in Nishinomiya, Hyōgo Prefecture. In 2020, it was canceled due to the COVID-19 outbreak. 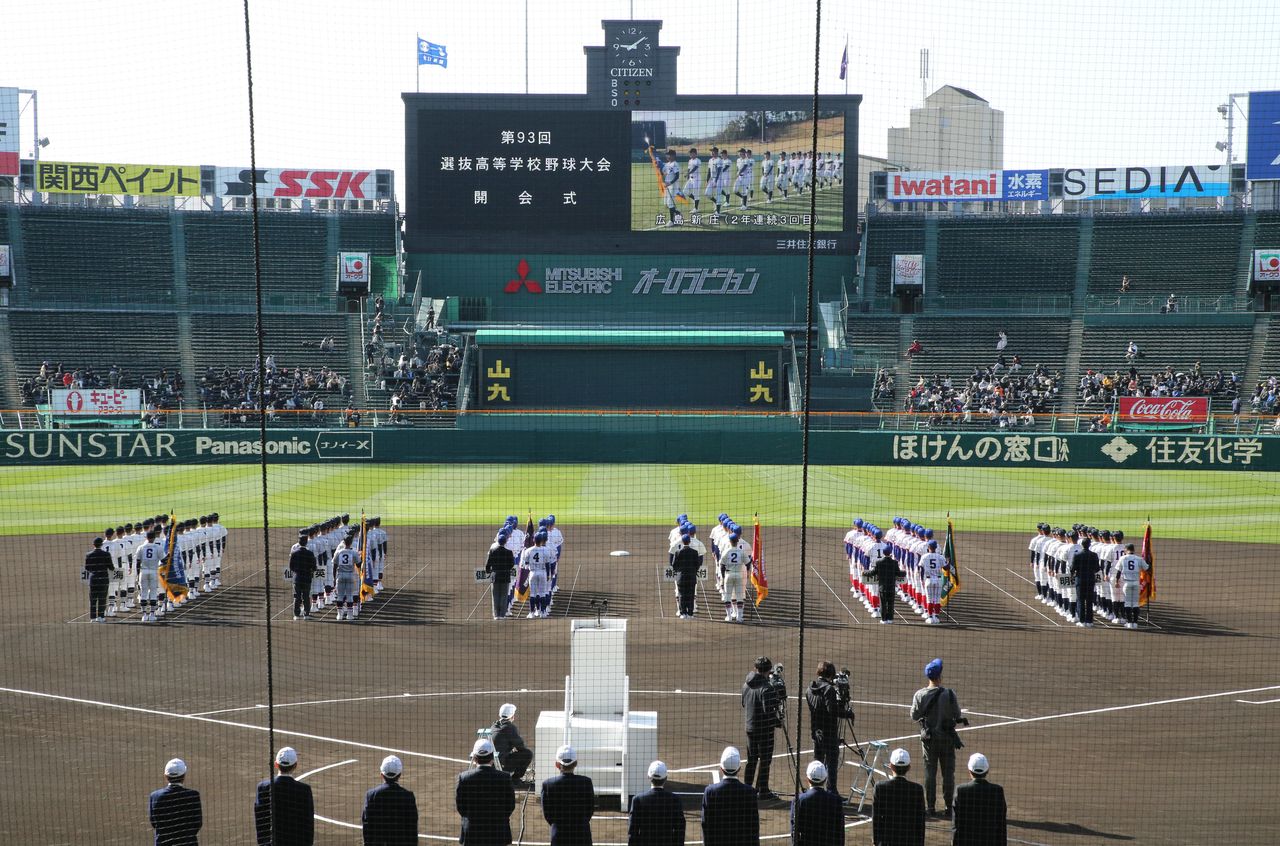 Players from just six schools take part in person at the opening ceremony with video of players from other schools appearing on the big screen on March 19, 2021. (© Jiji)

An earthquake with an estimated magnitude of 6.9 centered off Miyagi Prefecture causes shaking of upper 5 on the seismic intensity scale in Sendai and other areas.

The government lifts the COVID-19 state of emergency in the prefectures of Tokyo, Kanagawa, Saitama, and Chiba, following a second extension of two weeks.

Four Chinese coast guard vessels enter Japanese waters near the Senkaku Islands in Okinawa. This is the first intrusion into Japanese waters in the area since February 21, and the tenth this year.

During his trial at Tokyo District Court, former Minister of Justice Kawai Katsuyuki admits buying votes for his wife Anri’s 2019 House of Councillors election campaign. He resigns from the House of Representatives on March 25.

Koga Toshihiko, who won the gold medal in the men’s 71-kilogram jūdō competition at the 1992 Barcelona Olympics, dies at the age of 53. He was receiving treatment for cancer. 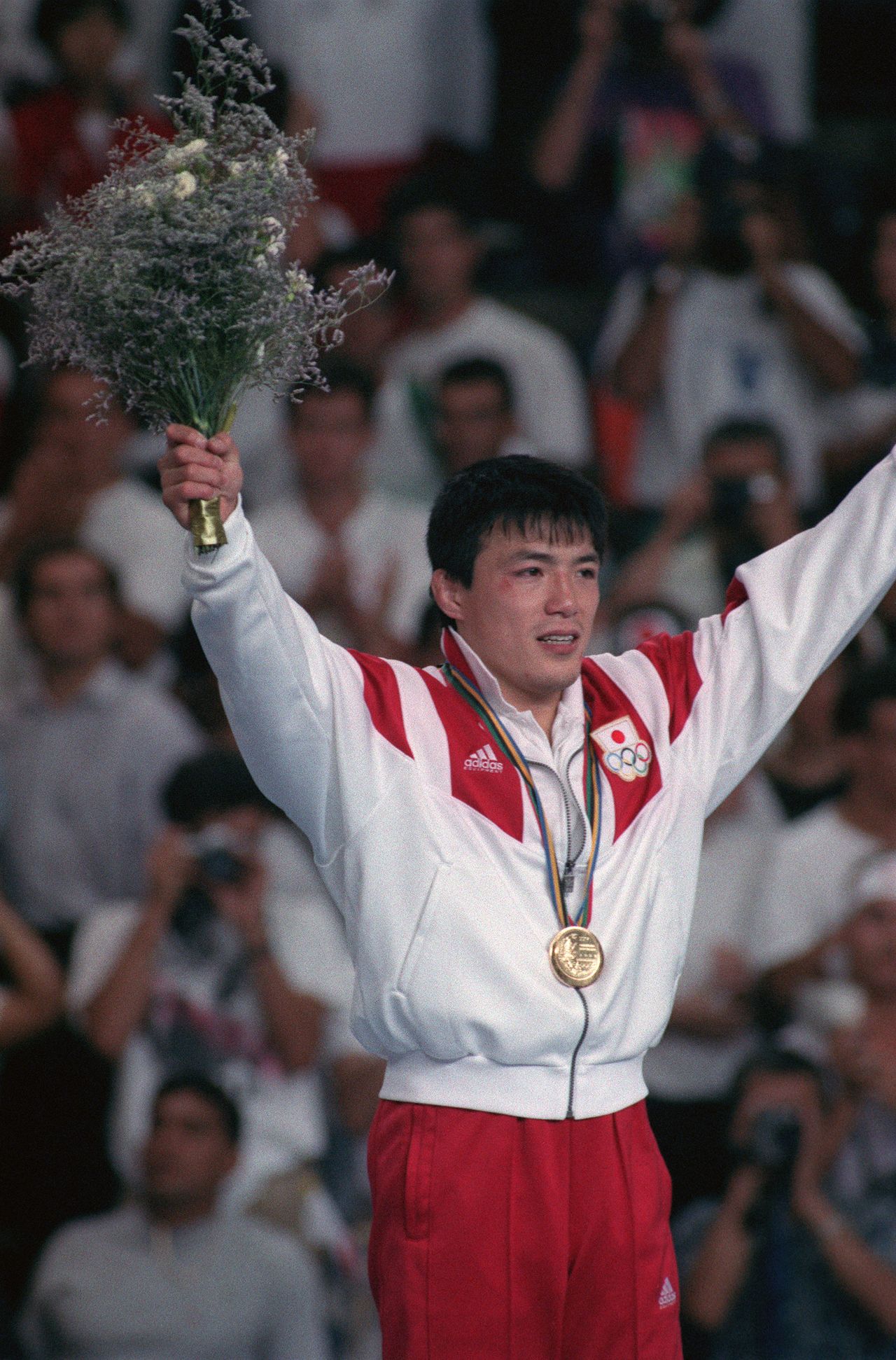 Koga Toshihiko on the podium on July 31, 1992, after winning gold in the men’s 71-kilogram jūdō competition at the Barcelona Olympics. (© Jiji)

The Nuclear Regulation Authority decides to ban TEPCO from moving nuclear fuel at its Kashiwazaki-Kariwa Nuclear Power Plant in Niigata Prefecture, until it has dealt with the issue that the plant’s equipment to detect intruders has been out of order since March 2020.

The Tokyo Olympic torch relay begins at the J-Village soccer training center in Fukushima Prefecture. Around 10,000 runners will carry the torch over the 121-day tour leading up to the opening ceremony.

The government announces that North Korea fired two ballistic missiles toward the Sea of Japan, but they fell into waters outside Japan’s exclusive economic zone.

A ¥106.6 trillion budget for fiscal 2021 is approved in the Diet. It includes ¥5 trillion set aside for pandemic countermeasures without the need for further Diet approval, and sets a record for the ninth consecutive year. The issuance of government bonds is over ¥40 trillion for the first time in seven years.

Nippon Professional Baseball’s Central and Pacific League seasons begin. The leagues will return to a normal 143-game schedule, but there will be restrictions on the number of spectators. Due to COVID-19 measures, games are also limited to nine innings and for the time being, night games in the capital region will begin early.

Two-plus-two security talks between Japan and Indonesia are held in Tokyo for the first time in five years. The two countries reach an agreement allowing for the export of Japanese defense equipment to Indonesia, which becomes the tenth country to sign such a treaty with Japan, after others including the United States, Britain, Malaysia, and the Philippines.

(Originally published in Japanese. Banner photo: Iwashimizu Azusa, the first runner to carry the Olympic torch, and other members of the women’s national soccer team at the start of the torch relay at the J-Village soccer training center on March 25, 2021. © Jiji; pool photo.)