Society May 7, 2021
In April 2021, the government declared a third state of emergency in response to rising COVID-19 cases, Prime Minister Suga Yoshihide met for the first time with US President Joe Biden in Washington DC, and golfer Matsuyama Hideki became the first Japanese player to win the Masters Tournament.

It is announced that legendary actor Tanaka Kunie, star of the popular TV show Kita no kuni kara (From the Northern Country) and the film series Wakadaishō (Young Ace), died on March 24. He was 88. 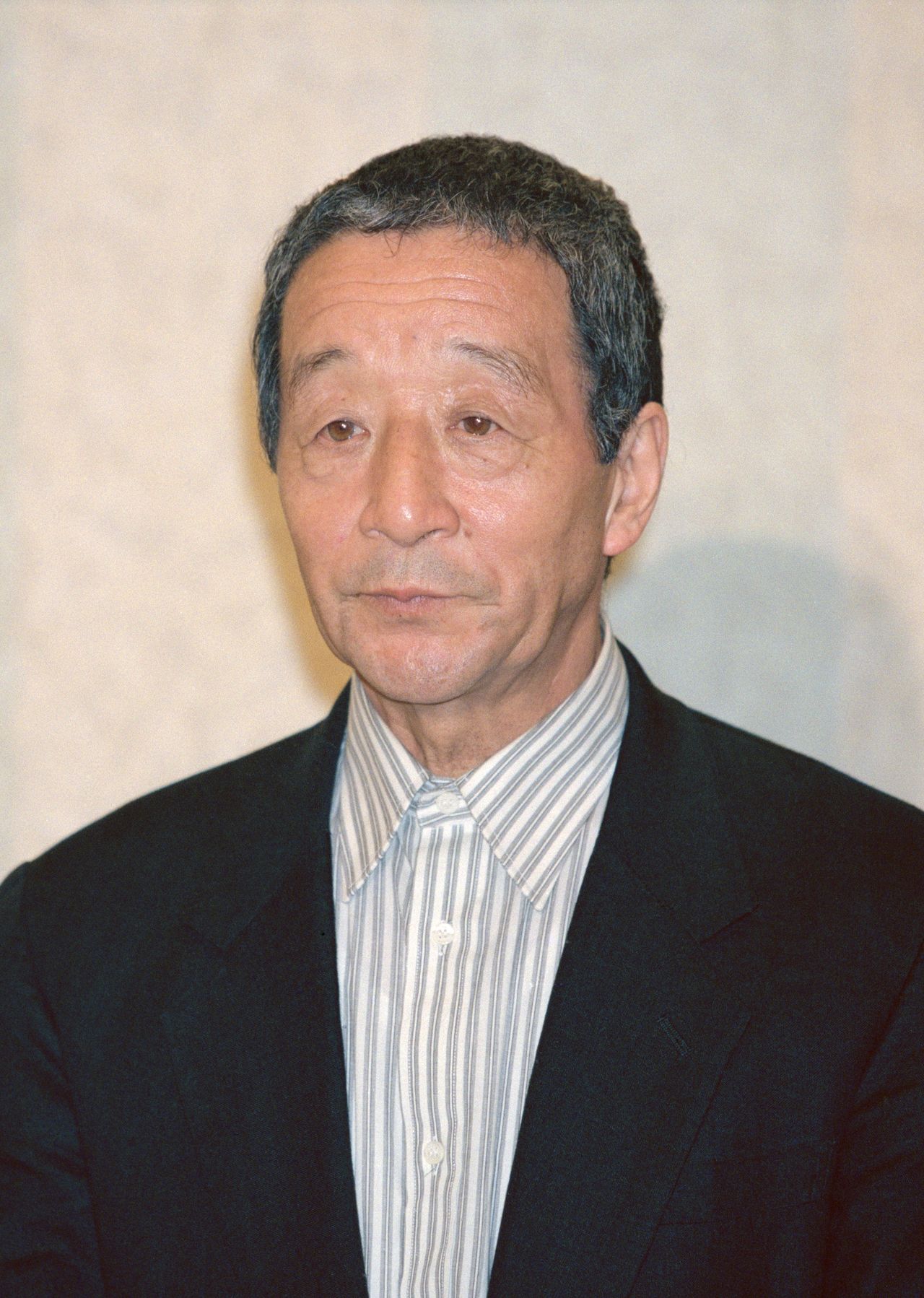 Meijō University professor Akasaki Isamu, who won the 2014 Nobel Prize in Physics with two other scientists for developing blue-light-emitting diodes, dies at the age of 92.

Swimmer Ikee Rikako continues her comeback from leukemia by winning the 100-meter women’s butterfly at the Japan National Swimming Championships for the first time in three years. The victory secures her a spot on the 4x100 medley relay team at the Tokyo Olympics, her second games since debuting in 2016 in Rio de Janeiro. 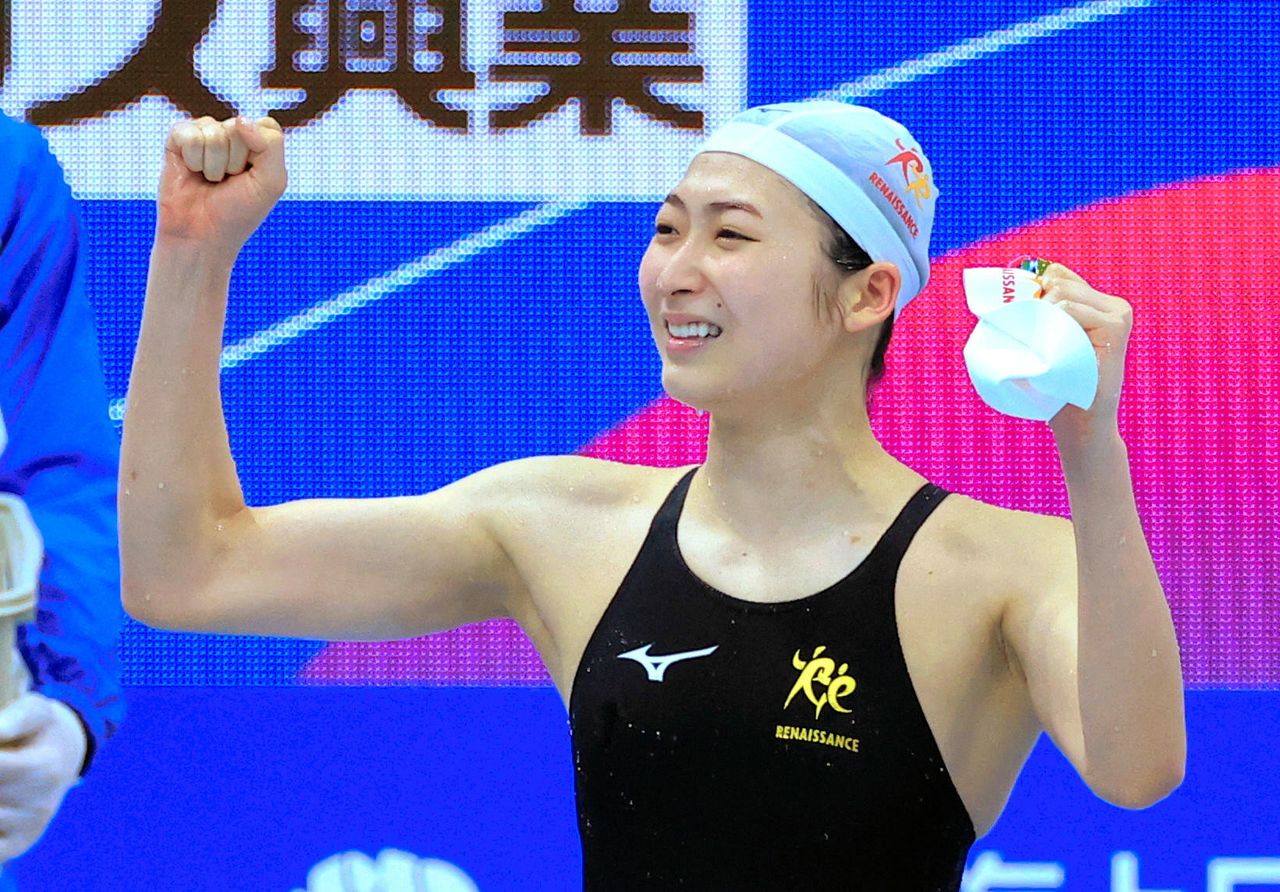 Ikee Rikako celebrates her victory in the women’s 100-meter butterfly on April 4, 2021, at the Tokyo Aquatics Center. (© Jiji)

Scriptwriter Hashida Sugako, who penned such popular television dramas as Oshin about a girl born into rural poverty and Wataru seken wa oni bakari (Making it Through), dies at her home in Shizuoka Prefecture. She was 95.

The government implements quasi-emergency measures in Osaka, Hyōgo, and Miyagi in response to an upswing in COVID-19 cases in those prefectures. Authorities extend these to Tokyo, Kyoto, and Okinawa on April 9, and then to Saitama, Chiba, Kanagawa, and Aichi on April 25.

Reports surface that Toshiba received buyout offers from overseas, including a massive bid from the British investment fund CVC Capital Partners. On April 20, the Japanese conglomerate dismisses the CVC offer for lacking details following strong backlash from within the company.

Golfer Matsuyama Hideki claims the prestigious green jacket at the Masters Tournament in Augusta, Georgia, becoming the first Japanese men’s player to win a major title. On April 30, he is presented with the Prime Minister’s Award in honor of the achievement.

COVID-19 vaccinations for elderly residents get underway in select areas of the country. The government aims to inoculate individuals 65 and over, some 36 million people or one-third of the entire population, by the end of June.

Kurumatani Nobuaki resigns as president and CEO of Toshiba amid management turmoil sparked by the emergence of a takeover bid by CVC Capital Partners. He is replaced by his immediate predecessor, Tsunagawa Satoshi.

Nikai Toshihiro, secretary-general of the ruling Liberal Democratic Party, throws doubt on the future of the Tokyo Olympics when he says on camera that the games should be cancelled if the COVID-19 pandemic continues to worsen.

Prime Minister Suga Yoshihide meets with US President Joe Biden at the White House for their first in-person summit. In a joint statement, the two leaders stress the importance of “peace and stability across the Taiwan Strait” and urge “peaceful resolution of cross-Strait issues” in recognition of increasing pressure by the Chinese military in the region. 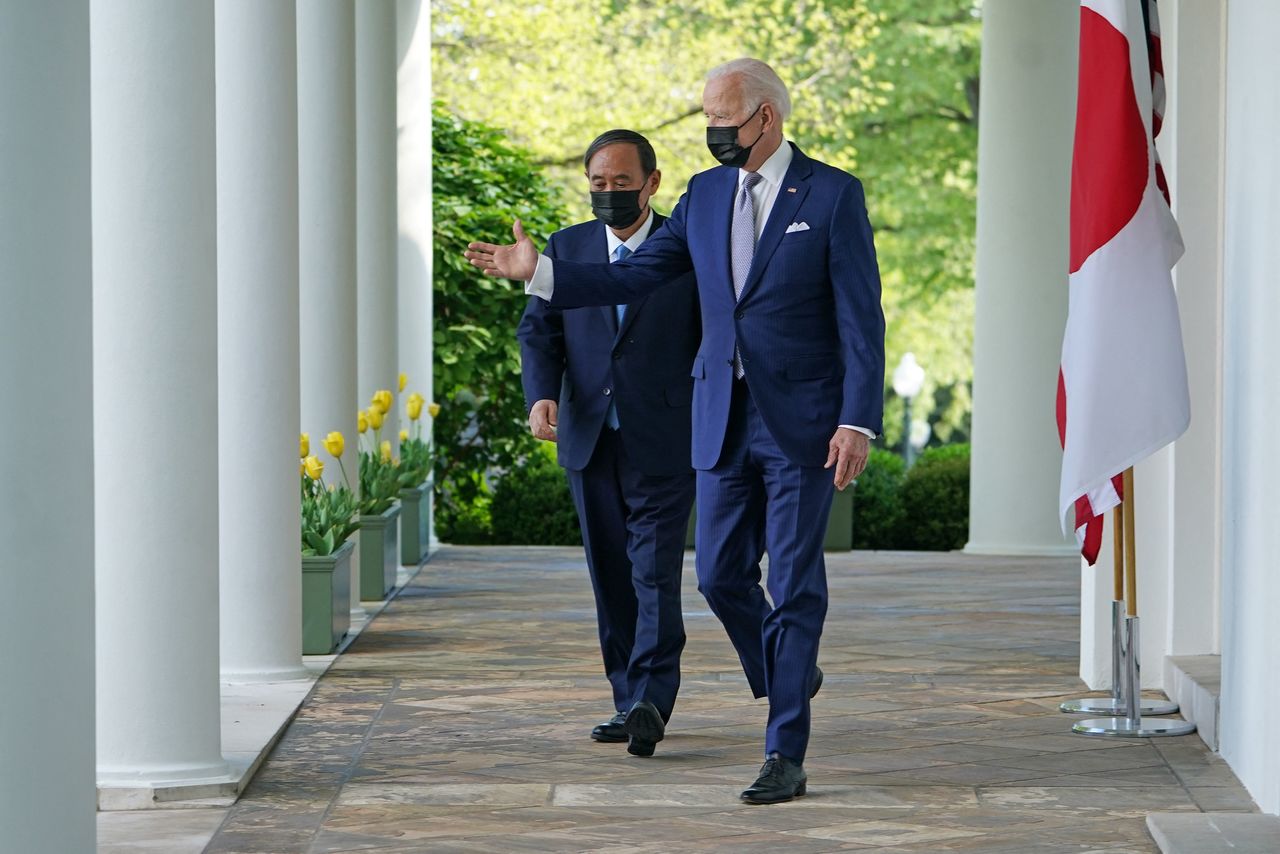 The Japanese embassy in Myanmar says that journalist Kitazumi Yūki has been arrested by authorities in the city of Yangon on charges of disseminating false news while covering protests following the February military coup in the country.

Prime Minister Suga, in a speech at a US-hosted online climate summit, announces Japan’s further commitment to reducing greenhouse gases, pledging to slash emissions by 46% from 2013 levels by fiscal 2030, up from the current target of 26%.

Automaker Honda Motor announces it aims to switch its lineup completely to electric and fuel-cell vehicles, including hybrid vehicles, by 2040. It also reveals plans to launch a compact EV in Japan in 2024.

Hoshide Akihiko and three other astronauts lift off from NASA’s Kennedy Space Center in Florida, bound for the International Space Station. The capsule carrying the crew successfully docks with the ISS on April 24. Hoshide meets fellow Japanese astronaut Noguchi Sōichi, who has been on the station since November 2020. On April 28, he takes command of the ISS , becoming the second Japanese captain of the vessel following Wakata Kōichi’s two-month tenure in 2014. 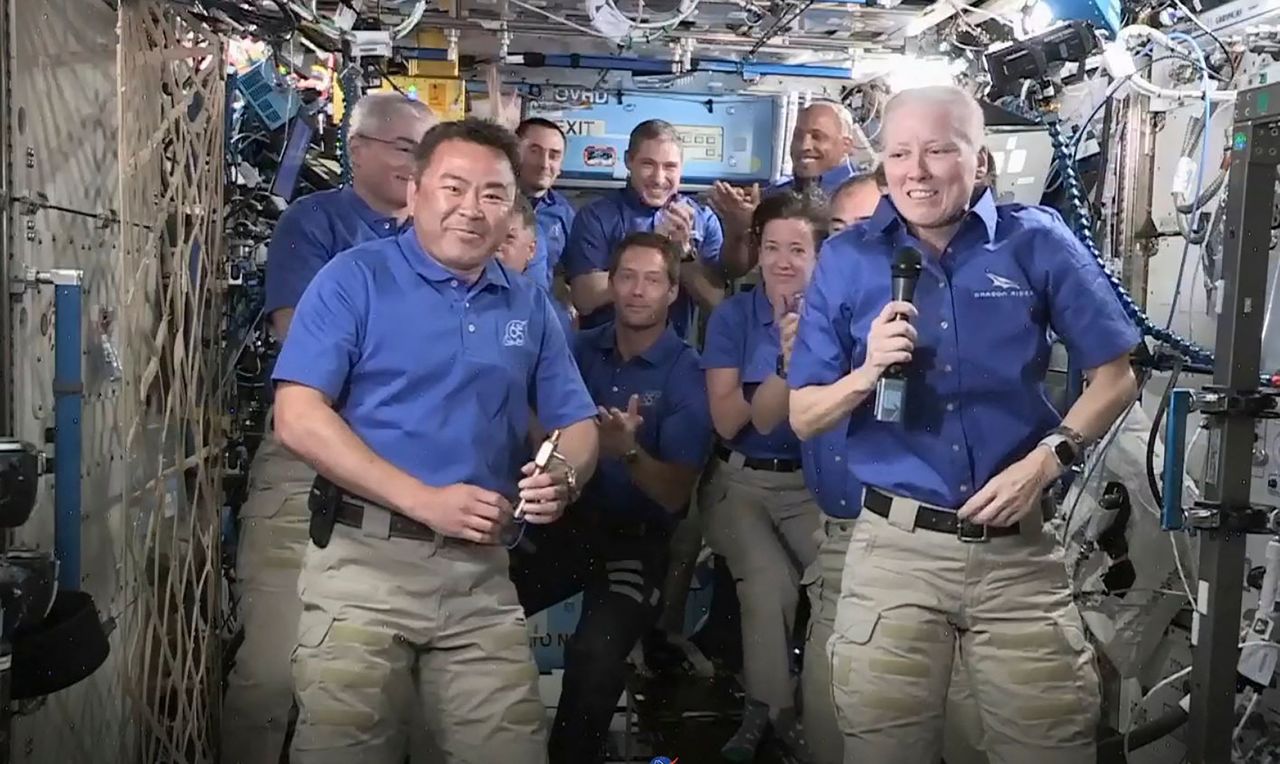 In an image from NASA TV, flight engineer Shannon Walker, right, speaks during an April 27 ceremony marking the change of command of ISS to Hoshide Akihiko, left, as fellow crewmembers look on. (Photo from NASA TV; © AFP/Jiji)

The Japanese government’s Personal Information Protection Commission, citing inadequate oversight, orders messaging app provider Line to address serious flaws in its use of personal information. In March, the firm came under heavy scrutiny after it was discovered that a Chinese subsidiary had access to customer data.

In response to rising COVID-19 cases, the government declares a third state of emergency covering the prefectures of Tokyo, Osaka, Kyoto, and Hyōgo. The order is initially set to end on May 11, but is likely to be extended until May 31.

Fukui Governor Sugimoto Tatsuji approves the restart of three units at Kansai Electric’s Mihama Nuclear Power Station that have been in service for more than four decades. It is the first time since the Fukushima Daiichi accident that a utility has received the green light to keep reactors in service beyond their set 40-year lifespan.

ANA Holdings, operator of Japan’s largest carrier All Nippon Airways, announces an annual loss of ¥404.6 billion in the last fiscal year ending in March amid a massive drop in international travel due to the pandemic. The deficit comes on the heels of a ¥27.6 billion profit the previous year.