Society Sep 1, 2021
Japan expanded its COVID-19 state of emergency, the Tokyo Olympics concluded, and the Paralympics began in August 2021.

The government expands the COVID-19 state of emergency from the prefectures of Tokyo and Okinawa to include Kanagawa, Saitama, Chiba, and Osaka until August 31.

Kansai Electric Power Co. announces plans to restart the number 1 reactor at Fukui Prefecture’s Takahama Nuclear Power Station in June 2023, despite it having passed the limit in principle of 40 years since coming into operation.

Foreign Minister Motegi Toshimitsu participates in an online meeting of foreign ministers from the Association of Southeast Asian Nations, and pledges to provide more vaccine doses to the region. At the East Asia Summit on August 4, attended online by ASEAN members and other invited countries, Motegi expresses his support for the appointment of Erywan Yusof of Brunei as special envoy to Myanmar.

Kawai Risako wins the Olympic gold medal in the women’s freestyle 57-kilogram wrestling event, the day after her sister Yukako takes gold in the 62-kilogram event. 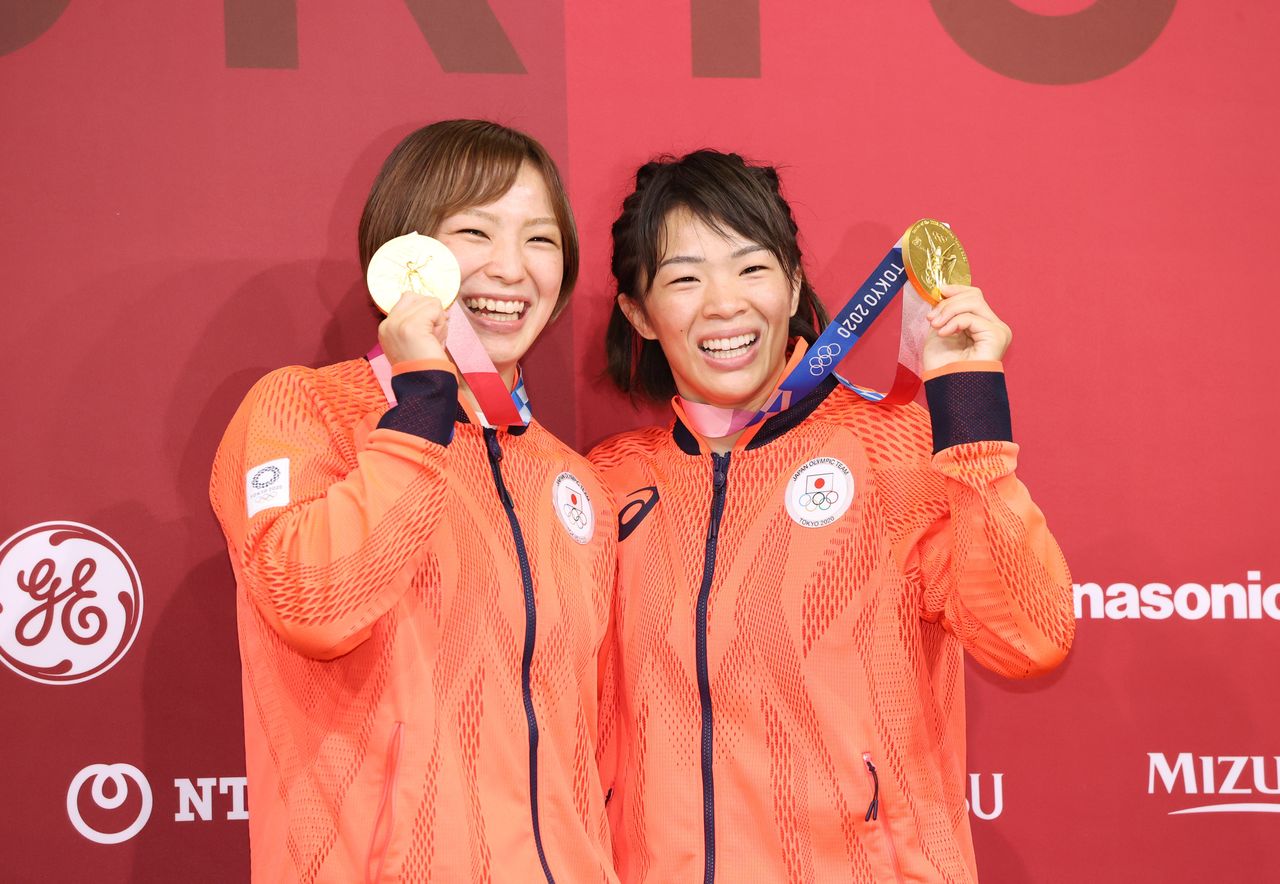 Hiroshima marks 76 years since the city’s atomic bombing with a ceremony in the Peace Memorial Park. On August 9, Nagasaki holds a ceremony on the anniversary of its bombing.

The total number of COVID-19 cases in Japan to date rises above 1 million.

Japan defeats the United States 2–0 to win the Olympic gold medal for baseball.

The closing ceremony for the Tokyo Olympics is held without spectators. Japan finishes with a record total of 58 medals. 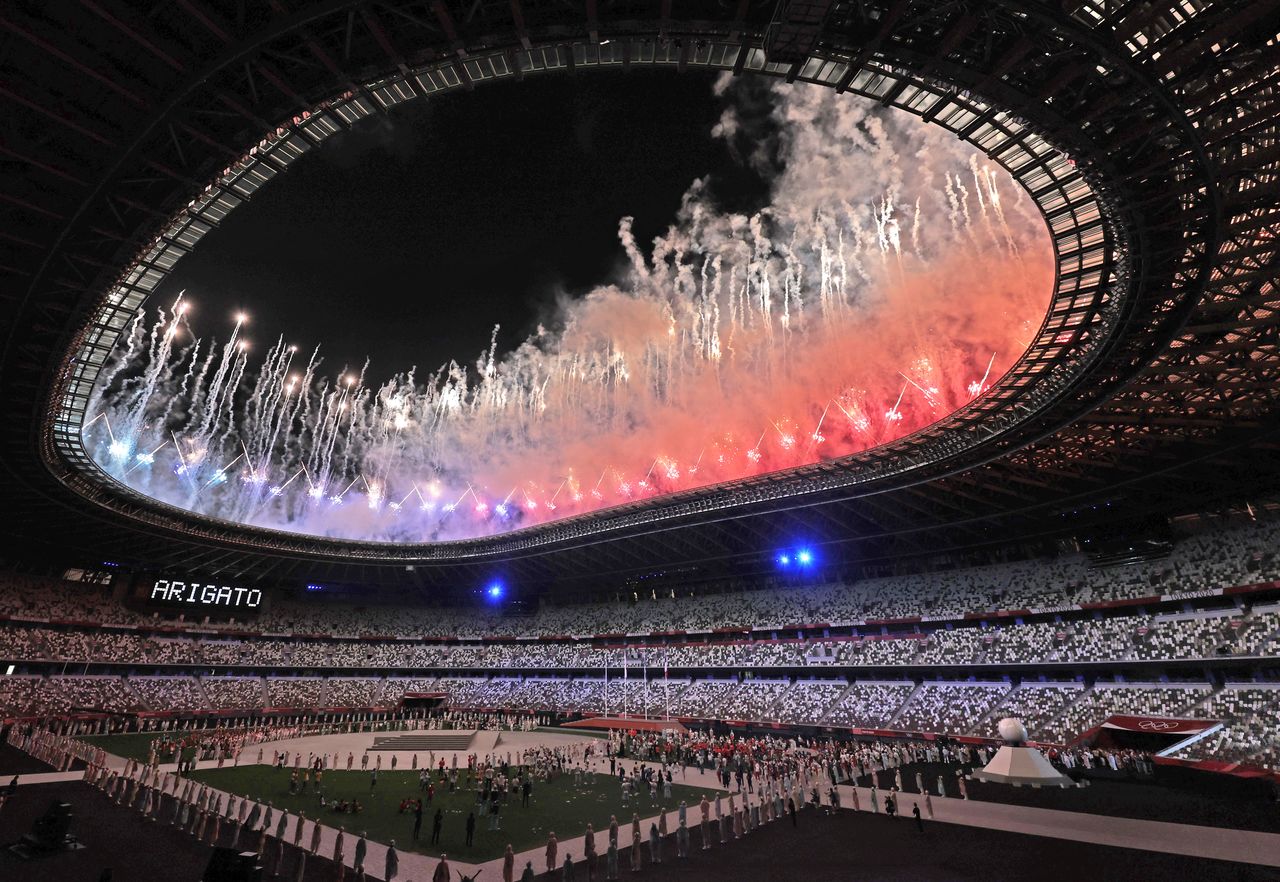 Fireworks at the closing ceremony for the Tokyo Olympics on August 8, 2021. (© Jiji)

An official ceremony is held in Tokyo to mark 76 years since the end of World War II, with a reduced number of participants as a measure to prevent COVID-19 infections.

The government, organizing committee, and other involved parties agree that the Tokyo Paralympics will be held without spectators.

The Cabinet Office announces that seasonally adjusted GDP in the second quarter of 2021 rose by 0.3%, an increase of 1.3% on an annualized basis, in a return to growth after the decline in the first quarter.

Toyota announces that it will reduce global production of vehicles by 360,000 in September, a 40% decrease on its planned output. Part supply problems from countries including Vietnam and Malaysia amid the pandemic contributed to the decision.

Action star Chiba Shin’ichi, known internationally as Sonny Chiba, dies of pneumonia associated with COVID-19 at the age of 82.

The government expands the state of emergency by adding the seven prefectures of Ibaraki, Tochigi, Gunma, Shizuoka, Kyoto, Hyōgo, and Fukuoka, and extends it until September 12.

Mizuho Bank and Mizuho Trust & Banking suffer a system failure that makes it temporarily impossible for customers to make money transfers, deposits, or withdrawals over the counter at branches. This is the fourth system failure since the end of February, and comes despite the June announcement of new measures to prevent such occurrences.

Foreign Minister Motegi meets the newly elected Iranian President Ebrahim Raisi in Tehran. He urges Raisi, known for his hardline stance toward the United States, to return to negotiations with Western countries over the 2015 nuclear deal after talks were suspended in June.

The Tokyo Paralympics begin after a one-year delay due to the COVID-19 pandemic. 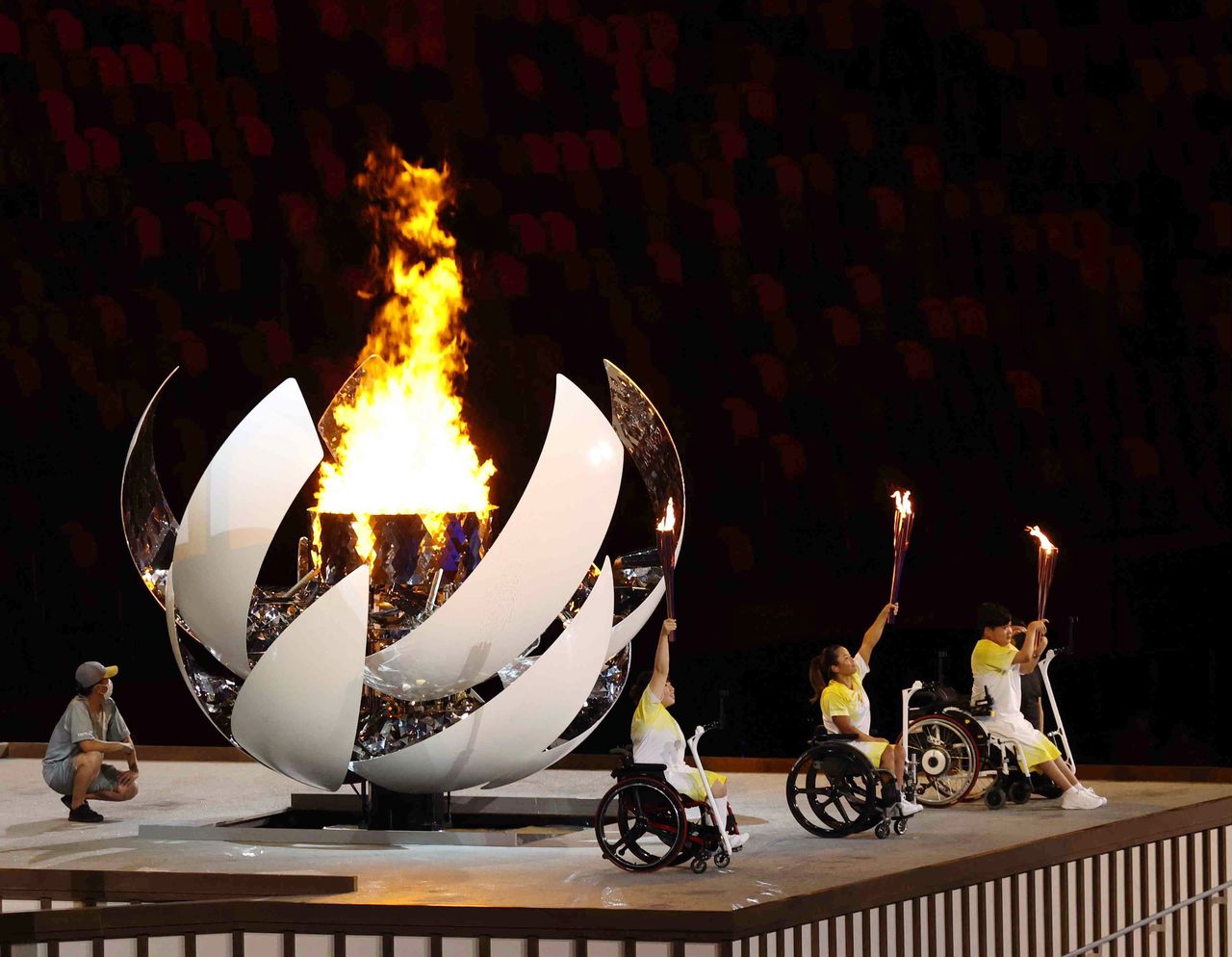 Nomura Satoru, the head of the Kudōkai crime syndicate based in Kitakyūshū, is sentenced to death at the Fukuoka District Court for his involvement in four assaults, including one murder.

The Ministry of Health, Labor, and Welfare announces the suspension of 1.6 million doses of Moderna’s COVID-19 vaccine after reports of foreign materials found in vials.

Defense Minister Kishi Nobuo orders the Self-Defense Forces to end their evacuation mission in Afghanistan. One Japanese citizen and 14 Afghans were transported to Pakistan. After remaining on standby in Pakistan, the SDF unit returned to Japan.

(Originally published in Japanese. Banner photo: Satō Tomoki celebrates after winning the gold medal in the men’s 400-meter T52 wheelchair race at the Paralympics in Tokyo on August 27, 2021. © Jiji.)