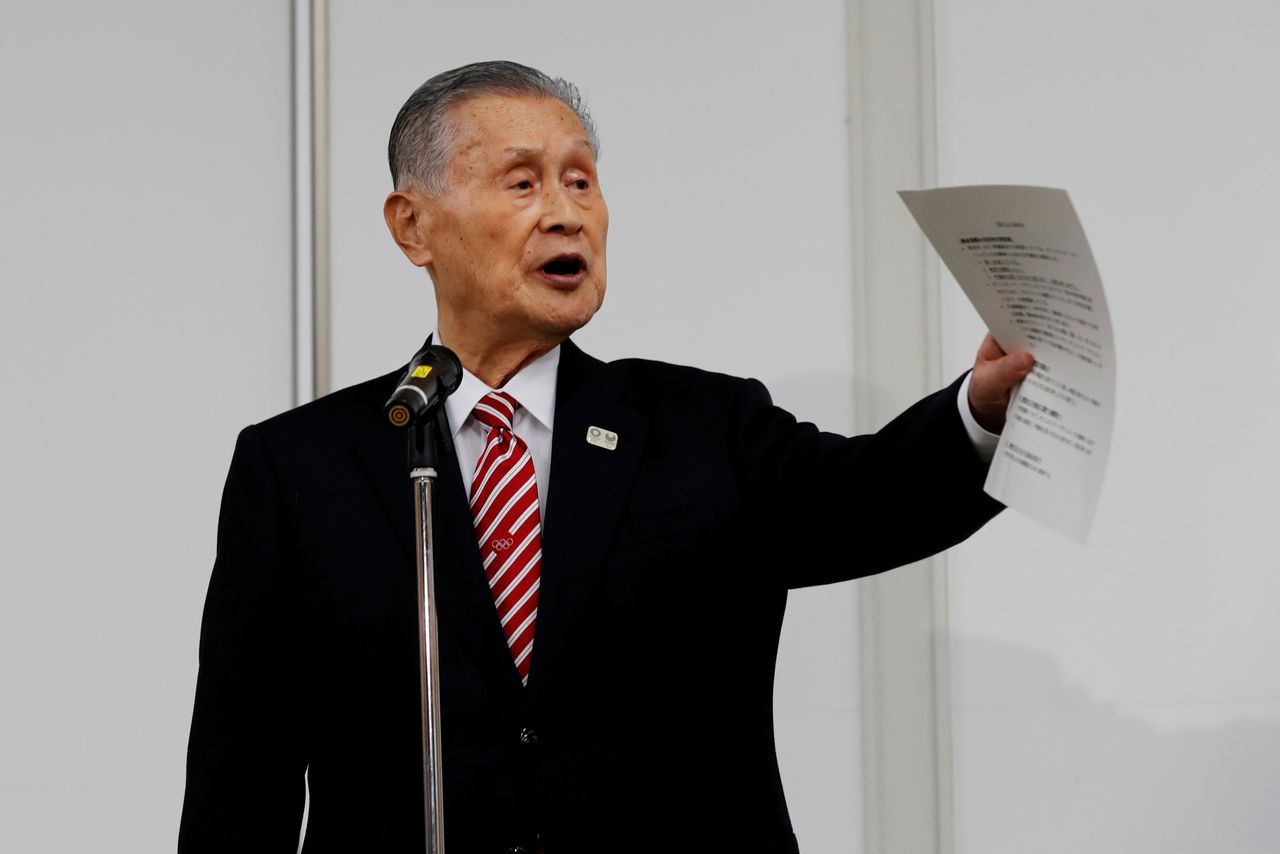 TOKYO (Reuters) - The Tokyo 2020 Olympic Organising Committee is set to convene a special board meeting as early as Friday after the outcry over committee president Yoshiro Mori’s sexist comments, public broadcaster NHK reported on Tuesday.

There are no plans to discuss Mori’s resignation at the meeting but he could face criticism over his comments, Nikkan Sports said in a separate report.

Mori has come under fire for saying last week that meetings with female participants take a long time, and they “get competitive” with each other. He apologised and retracted his comments, but public outrage appears far from assuaged.

Following Mori’s remarks, about 440 Games volunteers have quit and local organisers have received more than 5,500 complaints, according to local media. In a statement, the International Olympic Committee said his statements were “absolutely inappropriate”.

“We are taking this very seriously,” Olympic Minister Seiko Hashimoto said on Tuesday when asked about the resignation of the volunteers.

Daichi Oyama, 28, who withdrew from volunteering because of coronavirus concerns, said of Mori: “If every time he says something things get worse, he should quit.”

“It wasn’t just Japanese news, all the world heard what he said and there’s opposition being raised. It’s a very embarrassing thing for Japan,” he said.

But 80,000 people are signed up to help the Games and many are staying on.

“That was definitely a gaffe, but Mori is old ... and I think that people of that age have a tendency to look down on women, it’s a factor of their age,” said Misako Yoshizawa, 70, who teaches English part-time in Saitama prefecture and whose plans to volunteer haven’t changed despite the outcry.

“Mori is Mori, I’m not his volunteer. I’m a volunteer working to carry out the Tokyo Olympics,” she said.

Still, an online petition seeking action against Mori has attracted 140,000 signatures so far, and an editorial on Tuesday in the daily Mainichi said he should resign.

“This is not an issue that can be closed with a retraction or an apology,” it said.

Sponsors have also distanced themselves. Nippon Life Insurance Company said it was “disappointed” with the remarks and had made that clear to the organising committee.

Hiroaki Nakanishi, chairman of the influential business lobby Keidanren, initially refrained from commenting but later said: “I feel that that’s what some people are really thinking in Japan” and “social media is terrifying” given how rapidly comments are shared and spread online.

Asked to clarify what he meant, Nakanishi said it was customary in Japan to differentiate between men and women but that thinking is outdated, according to TV Asahi.

But the comment was trending on social media, with people taking to Twitter express frustration over Nakanishi’s comments as well.

“He made a sweeping statement about Japan, but I think this is what the chairman himself is thinking. He’s the same as president Mori in his inability to listen to his critics,” said one Twitter user.