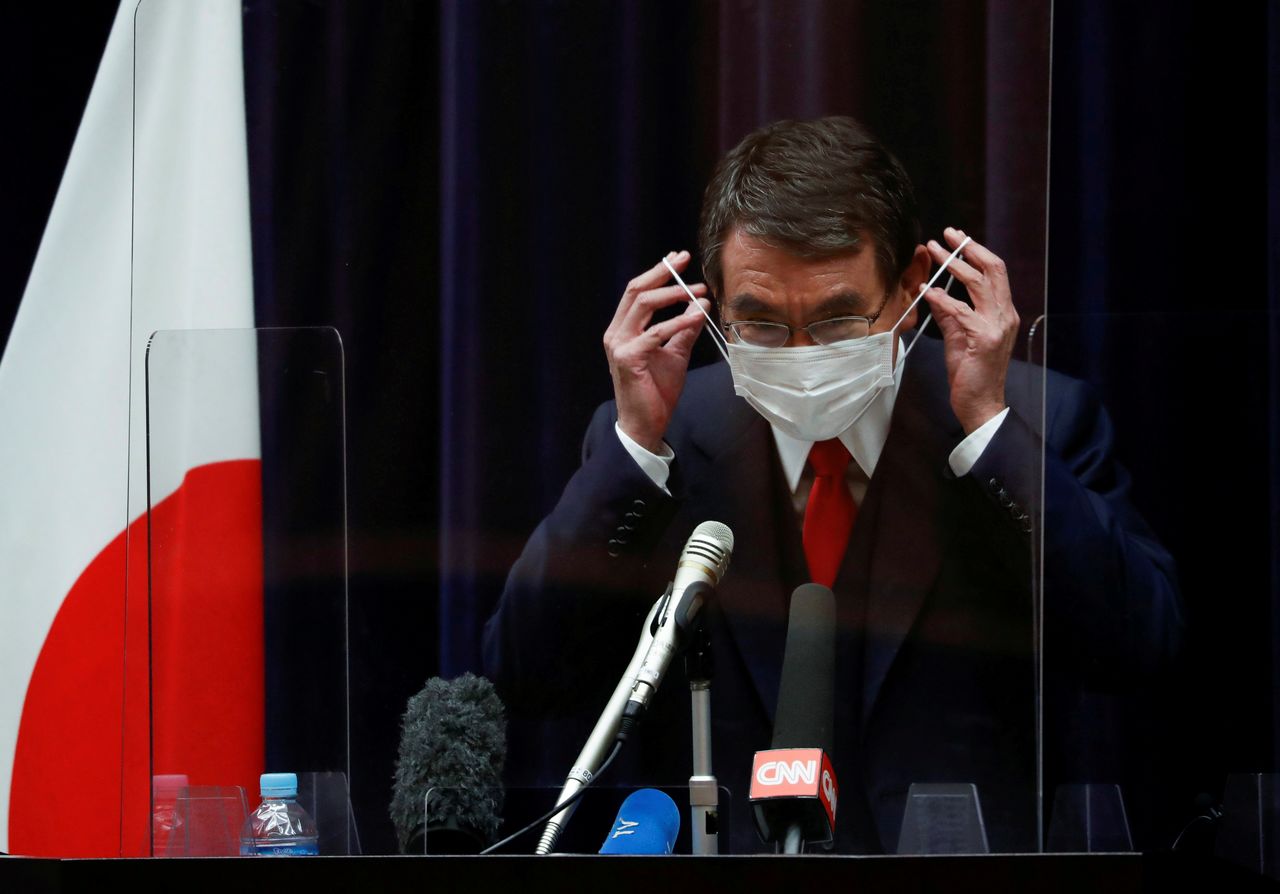 Twitter-savvy and educated at Georgetown University in Washington, Kono has seen his popularity surge even as the government of his boss, Prime Minister Yoshihide Suga, has been battered by criticism over its handling of the COVID-19 pandemic.

Two recent opinion polls have favoured Kono, who is also the minister for administrative reform, to be the next prime minister. As Japan launches its much awaited COVID-19 vaccination campaign, his role as the logistics head of the programme has thrust him even more firmly into the spotlight.

Part of Kono’s attraction, in a nation known for wooden, script-following leaders, is his ability to engage directly with voters through social media, a sharp contrast to Suga, who has been criticised for seeming stiff and aloof from voters.

In recent weeks, Kono, 58, has used Twitter to publish videos on vaccine safety, repost memes and address media reports. He frequently responds directly to followers - 2.2 million on his Japanese account and 50,000 for his English one.

Last week he posted about conferences with governors over the coronavirus, and a black mask embroidered with a dinosaur skull he had worn the previous day.

But for all his appeal to voters and a resume that includes foreign and defence minister, some in the ruling Liberal Democratic Party (LDP), which he would lead as premier, are wary.

“He speaks English, he’s smart, he’s got a media presence, and he uses social media, so that’s kind of appealing,” said Scott Seaman, Asia director at the Eurasia Group in Washington. “But he would still have to run the LDP. And that’s a skill.”

Given the LDP’s majority in parliament, its leader is virtually guaranteed the premiership. Only two LDP presidents have failed to be premier during brief spells when the party was out of power - including Kono’s father, Yohei.

Some say his father’s being denied the top job may have helped feed the son’s ambition for the post.

Kono declined a direct answer on Tuesday about whether he could work with the party if he became premier, with his current job a possible step towards that end.

“My job is the health of the Japanese people, let’s not politicise this job,” he told a news conference. “It’s too important to politicise.”

Some in the LDP feel he is too young, given the average age since 2000 for premiers to take office is roughly 62. But their concerns also include his lone-wolf character in a land that runs on consensus, as well as an outspoken streak and occasional divergence from the standard line.

Last month Kono told Reuters that “anything is possible” regarding the Tokyo Olympics, breaking with government vows that the Games, already postponed once, will open as planned in July.

Last year, as defence minister, he suddenly cancelled deployment of the U.S.-made Aegis Ashore missile defence system without consulting others beforehand, a move that an LDP official said may have angered key ally the United States.

“I wonder if he can build a good relationship with the U.S. as a result,” said the official, who asked not to be named given the sensitivity of the issue.

The faction-ridden LDP could prove difficult to run. Its tolerance of mavericks such as the wildly popular Junichiro Koizumi, premier from 2001 to 2006, has diminished in recent years, said political commentator Atsuo Ito.

“His bluntness will likely go over well with voters, but I’m not sure how well it’d work running a big organisation,” added Ito.

Kono’s popularity, though, may prove hard for the LDP to resist and was likely part of Suga’s calculus in putting him in charge of the vaccine rollout, to gain some support himself, political analysts said, although they wondered if Suga was also trying to neutralise a political rival.

With a general election looming by October and the LDP chief’s term expiring in September, putting Kono in the top job could bring big benefits for LDP candidates. But pitfalls remain, including Japan’s rollout of the coronavirus vaccine.

“This is a gamble,” the LDP official said. “If the vaccine doesn’t go as planned, it’s the end for both Suga and Kono.”