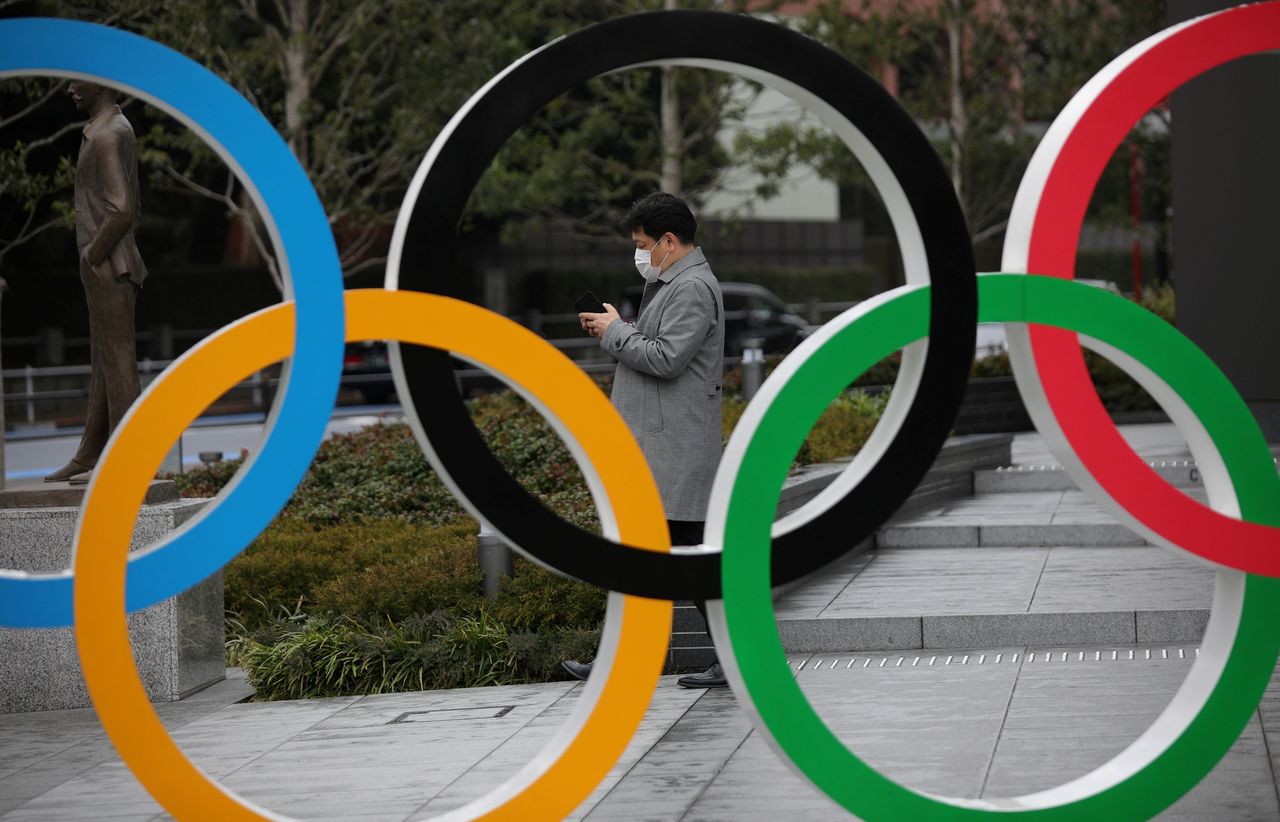 FILE PHOTO: A man looks at his mobile phone next to The Olympic rings in front of the Japan Olympics Museum in Tokyo, Japan, March 4, 2020. REUTERS/Stoyan Nenov/File Photo

TOKYO (Reuters) - Nearly two thirds of Japanese firms oppose holding the Tokyo Olympics as planned, a Reuters monthly poll found, swinging from the previous survey that showed most companies were in favour of giving it a go-ahead amid the COVID-19 pandemic.

The Corporate Survey found 36% of Japanese firms called for postponement and 29% demanded cancellation, while the remaining 35% wanted the Tokyo Olympic Games to go ahead.

The results were in line with recent public opinion polls, including one taken by the Yomiuri newspaper last week, which showed a majority of Japanese opposed holding the Olympics this summer due to the pandemic.

The Tokyo Olympic Games were postponed last year due to the pandemic and rescheduled to take place this year from July 23.

“If the Olympics can wait another year, we could then see vaccines become widely available,” making it safe to hold the Games, an electric machinery maker manager wrote in the survey.

“No one wants it to be held forcibly now,” wrote a transportation company manager.

Should the Olympics go ahead this summer, almost half the companies called for restrictions on the number of spectators, and 43% demanded no-spectator Games, the Feb. 2-12 poll found.

While 6% called for cuts in the number of events at the Olympics, just 3% wanted the Games to be held as scheduled, the Corporate Survey showed.

Asked how much impact the Tokyo Olympics may have on the Japanese economy, 88% of the companies said they expected either limited or not much effect. While 6% saw it weighing on the economy, only 5% expected a big economic boost.

“Considering the economic impact, a cancellation would deepen damage to the economy,” wrote a manager of a chemical producer.

The Corporate Survey, conducted for Reuters by Nikkei Research, canvassed 482 large and medium non-financial Japanese corporations on condition of anonymity because they can express opinions more freely. Managers of roughly 220 firms responded.

The previous corporate survey, conducted Oct. 26-Nov. 4, showed 68% wanted the Games to go ahead while three quarters thought spectator numbers should be restricted if they do go ahead.