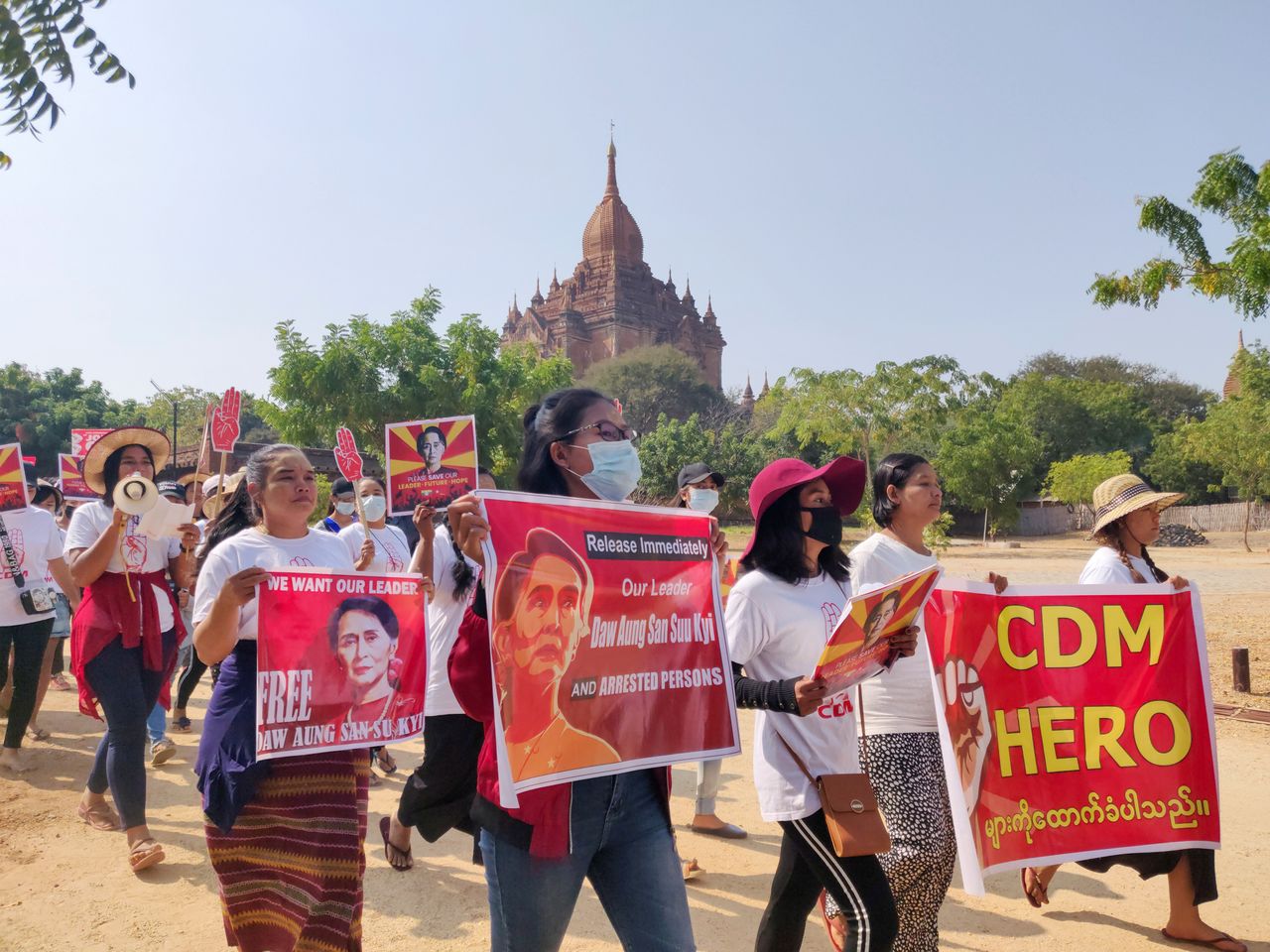 Demonstrators march during a protest against the military coup, near temples in Bagan, Myanmar February 18, 2021. REUTERS/Stringer

TOKYO/WASHINGTON (Reuters) - Foreign ministers of the so-called Quad grouping of countries seen as a forum to stand up to China in Asia agreed that democracy must be restored quickly in Myanmar and to strongly oppose attempts to upset the status quo by force, Japan’s foreign minister said on Thursday.

U.S. Secretary of State Antony Blinken and his counterparts from India, Japan and Australia met virtually for the first time under the Biden administration and discussed Myanmar, COVID-19, climate, and Indo-Pacific territorial and navigation issues, the State Department said in a statement.

“We’ve all agreed on the need to swiftly restore the democratic system (in Myanmar),” and to strongly oppose all unilateral attempts to change the status quo by force, Japanese Foreign Minister Toshimitsu Motegi told reporters.

“I stressed that, with challenges to existing international order continuing in various fields, the role we, the countries that share basic values and are deeply committed to fortifying free and open international order based on the rule of law, play is only getting bigger,” Motegi said.

The State Department said Blinken and his counterparts discussed counterterrorism, countering disinformation, maritime security and “the urgent need to restore the democratically elected government in Burma.”

They also addressed the “the priority of strengthening democratic resilience in the broader region,” it said.

The State Department said the four reiterated a commitment for the Quad to meet at least annually at ministerial levels and regularly at senior and working levels “to strengthen cooperation on advancing a free and open Indo-Pacific region, including support for freedom of navigation and territorial integrity.”

Myanmar’s military overthrew the elected government of Aung San Suu Kyi in a Feb. 1 coup. The United States has responded with sanctions and urged other countries to follow suit.

President Joe Biden has said working closely with allies will be key to his strategy toward China, in which he has said the United States will aim to “out-compete” Beijing.

The United States and other Quad members are concerned about China’s extensive maritime claims in Asia, including in the South China Sea, where Beijing has established military outposts in disputed waters. In the East China Sea, China claims a group of uninhabited islets administered by Japan, a dispute that has plagued bilateral relations for years.

(Reporting by Kiyoshi Takenaka in Tokyo and David Brunnstrom and Doina Chiacu in Washigton; Editing by Kevin Liffey and Steve Orlofsky)