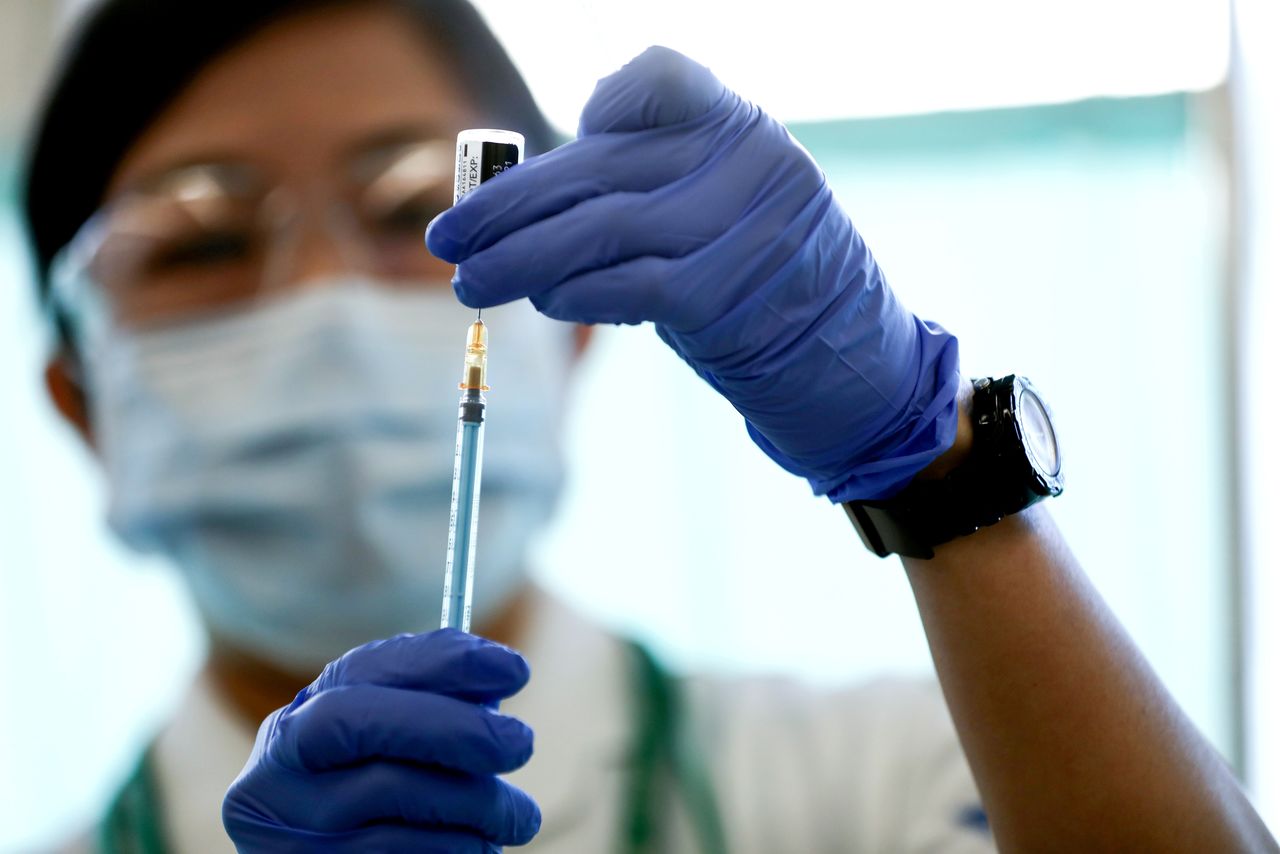 A medical worker fills a syringe with a dose of the Pfizer-BioNTech coronavirus disease (COVID-19) vaccine as Japan launches its inoculation campaign, at Tokyo Medical Center in Tokyo, Japan February 17, 2021. Behrouz Mehri/Pool via REUTERS

TOKYO (Reuters) - Japan will only receive limited doses of COVID-19 vaccines for the first months of the rollout and shots for the elderly will be distributed gradually, the country’s inoculation chief said.

Pfizer Inc, the maker of Japan’s only approved COVID-19 vaccine, is ramping up production in Europe, but those increased supplies are not likely to reach Japan until May, Administrative Reform Minister Taro Kono cautioned on Sunday in an interview with national broadcaster NHK.

“We would like to start vaccinations for the elderly in April, but unfortunately the number of doses allocated to them will be very limited at first, so we want to start slowly,” Kono said.

Japan has negotiated to receive more than 500 million doses of COVID-19 vaccines developed by Western drugmakers. But domestic regulators have only approved one vaccine so far, and the nation remains dependent on imported supplies that have been held up by production snags and export controls.

As Japan and other nations consider how to stretch scarce vaccine supplies, a recent Israeli study indicated that a single shot of the Pfizer formula may protect against the virus, rather than the standard two doses.

Japan’s chief government spokesman said on Monday that the vaccine’s regulatory approval was based on a two-dose regime.

“I think we need to carefully consider whether we can immediately conclude from this study that one dose is enough or not,” Chief Cabinet Secretary Katsunobu Kato told reporters.

Since Kono was tapped last month to lead Japan’s vaccination push, he has resisted giving firm timelines for when doses will arrive and be distributed. Even so, the government has stuck to a pledge to secure enough shots for the whole population of 126 million by June.

Japan has negotiated to receive 144 million doses of Pfizer’s vaccine this year, and its second shipment of about 450,000 shots arrived on Sunday.

The inoculation campaign kicked off last week with doctors and nurses getting the first shots. The government is prioritising vaccinations for around 4.7 million medical workers, about 1 million more than initially estimated.