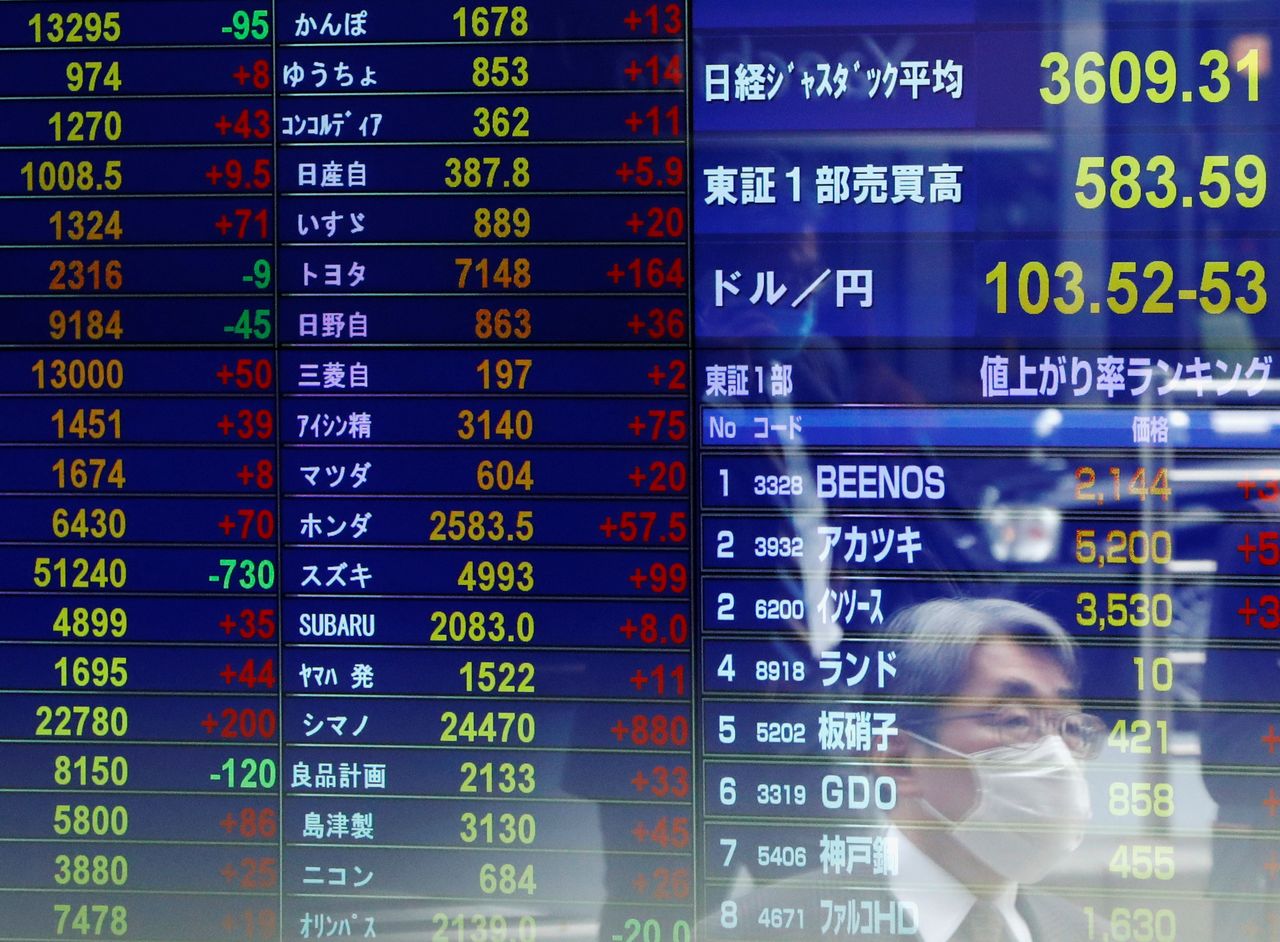 FILE PHOTO: A passersby wearing a protective face mask is reflected on screen displaying the Japanese yen exchange rate against the U.S. dollar and stock prices at a brokerage, amid the coronavirus disease (COVID-19) outbreak, in Tokyo, Japan November 6, 2020. REUTERS/Issei Kato

SYDNEY (Reuters) - Asian shares rallied on Monday as some semblance of calm returned to bond markets after last week’s wild ride, while progress in the huge U.S. stimulus package underpinned optimism about the global economy and sent oil prices higher.

China’s official manufacturing PMI out over the weekend missed forecasts, but Japanese figures showed the fastest growth in two years. Investors are also counting on upbeat news from a raft of U.S. data due this week including the February payrolls report.

“The bond moves on Friday still feel like a pause for air, rather than the catalyst for a move towards calmer waters,” said Rodrigo Catril, a senior strategist at NAB.

“Market participants remain nervous over the prospect of higher inflation as economies look to reopen aided by vaccine roll outs, high levels of savings along with solid fiscal and monetary support.”

Analysts at BofA noted the bond bear market was now one of the most severe on record with the annualised price return from 10-year U.S. govt bonds down 29% since last August, with Australia off 19%, the UK 16% and Canada 10%.

The rout owed much to expectations of faster U.S. growth as the House passed President Joe Biden’s $1.9 trillion coronavirus relief package, sending it to Senate.

BofA’s U.S. Economist Michelle Meyer lifted her forecast for economic growth to 6.5% for this year and 5% next, due to the likelihood of the larger stimulus package, better news on the virus front and encouraging data.

U.S. virus cases were also down 72% since a Jan. 12 peak and hospitalisations are following closely behind, BofA added.

Higher U.S. yields combined with the general shift to safety helped the dollar index rebound to 90.787 from a seven-week low of 89.677.

“Riskier” currencies and those exposed to commodities bounced a little after taking a beating late last week, with the Australian and Canadian dollars up and emerging market currencies from Brazil to Turkey looking steadier.

Non-yielding gold was still nursing losses after hitting an eight-month low on Friday en route to its worst month since November 2016. It was last at $1,750 an ounce, just above a trough around $1,716.

Oil prices extended their gains ahead of an OPEC meeting this week where supply could be increased. Brent gained 4.8% last week and WTI 3.8%, while both were about 20% higher over February as a whole.