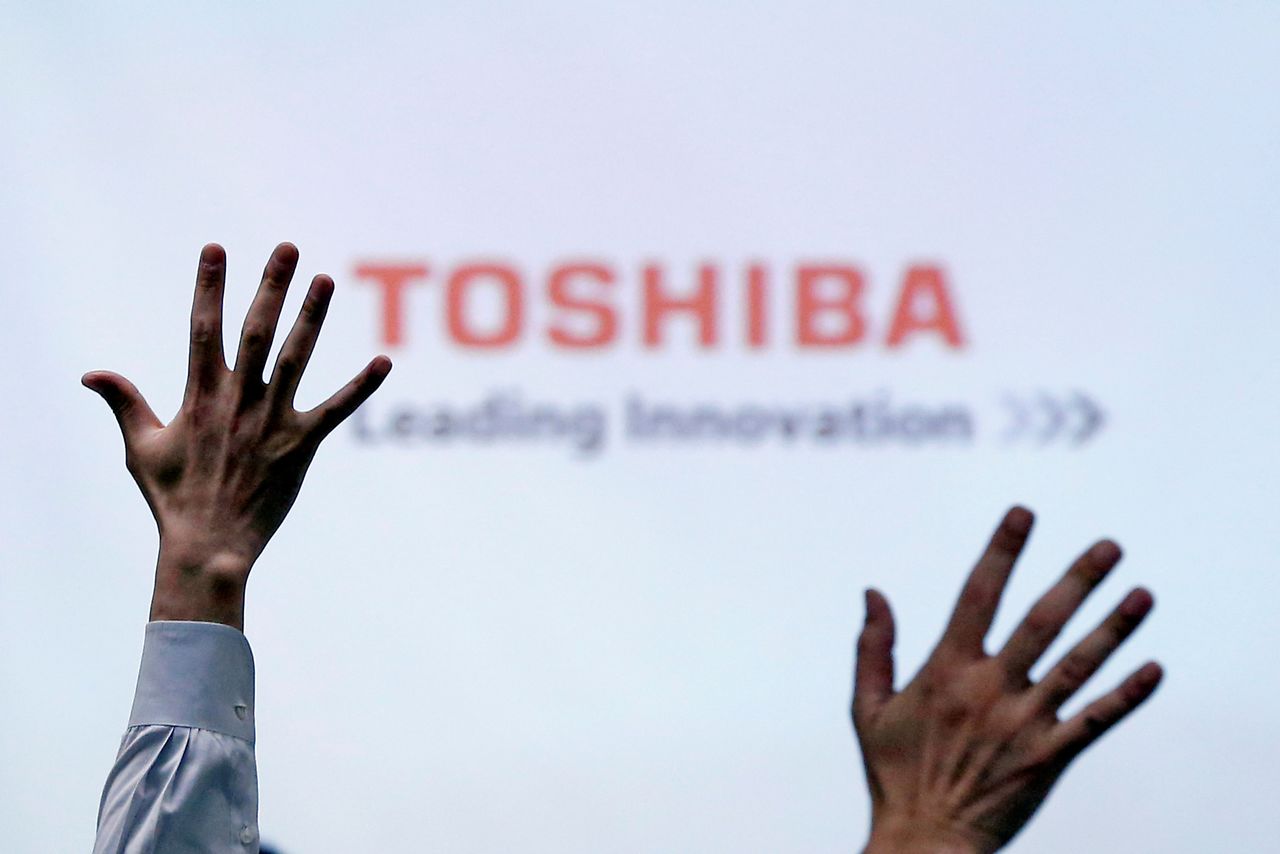 FILE PHOTO: Reporters raise their hands for a question during a news conference by Toshiba Corp CEO Satoshi Tsunakawa (not in picture) at the company headquarters in Tokyo, Japan June 23, 2017. REUTERS/Issei Kato/File Photo

TOKYO (Reuters) - Toshiba Corp shareholders should vote in favour of a proposed independent investigation into allegations that investors were pressured ahead of last year’s annual general meeting, an influential proxy adviser has recommended.

The recommendation has the potential to tip the balance of power towards Effissimo Capital Management and other activist shareholders in their long-standing row with Chief Executive Nobuaki Kurumatani and management of the scandal-hit industrial conglomerate.

The vote will take place at a shareholders’ meeting on March 18 and activist investors are estimated to hold about 25% of Toshiba’s shares.

Singapore-based Effissimo, which is Toshiba’s biggest investor with a 9.9% stake, made the proposal after investor complaints about the last AGM. Reuters has reported the Harvard University endowment fund had been told by a Japanese government adviser that it could be subject to a regulatory probe if it voted against management.

As a result, the fund abstained from voting and later learnt there was no basis for any probe, sources have said.

Toshiba has conducted its own investigation into the matter and found it was not involved in any effort to pressure the Harvard fund. It did not reach a conclusion as to whether there had been any pressure.

Effissimo has also asked that allegations of miscounting of votes at the AGM be further looked into. Sumitomo Mitsui Trust Bank Ltd has acknowledged it made mistakes in the counting but Effissimo says some irregularities have not been accounted for.

In a report seen by Reuters, Institutional Shareholder Services Inc (ISS) called that probe “one-sided” and said it was difficult to escape the impression that Toshiba conducted a perfunctory investigation.

At the last annual general meeting, Kurumatani kept his job with just 57% of the vote. That compared with 99% the previous year in a country where CEOs usually get overwhelming support.

Toshiba has been dogged by years of scandals including accounting misdeeds and a huge writedown for its U.S. nuclear business that it eventually withdrew from.

In its report, ISS, however, recommended against a different proposal from Farallon Capital Management, Toshiba’s second largest shareholder, which seeks to force the board to present a five-year capital policy plan or make certain returns to shareholders.

It said the U.S hedge fund’s proposal was “overly prescriptive, particularly given its five-year duration, to warrant support.”