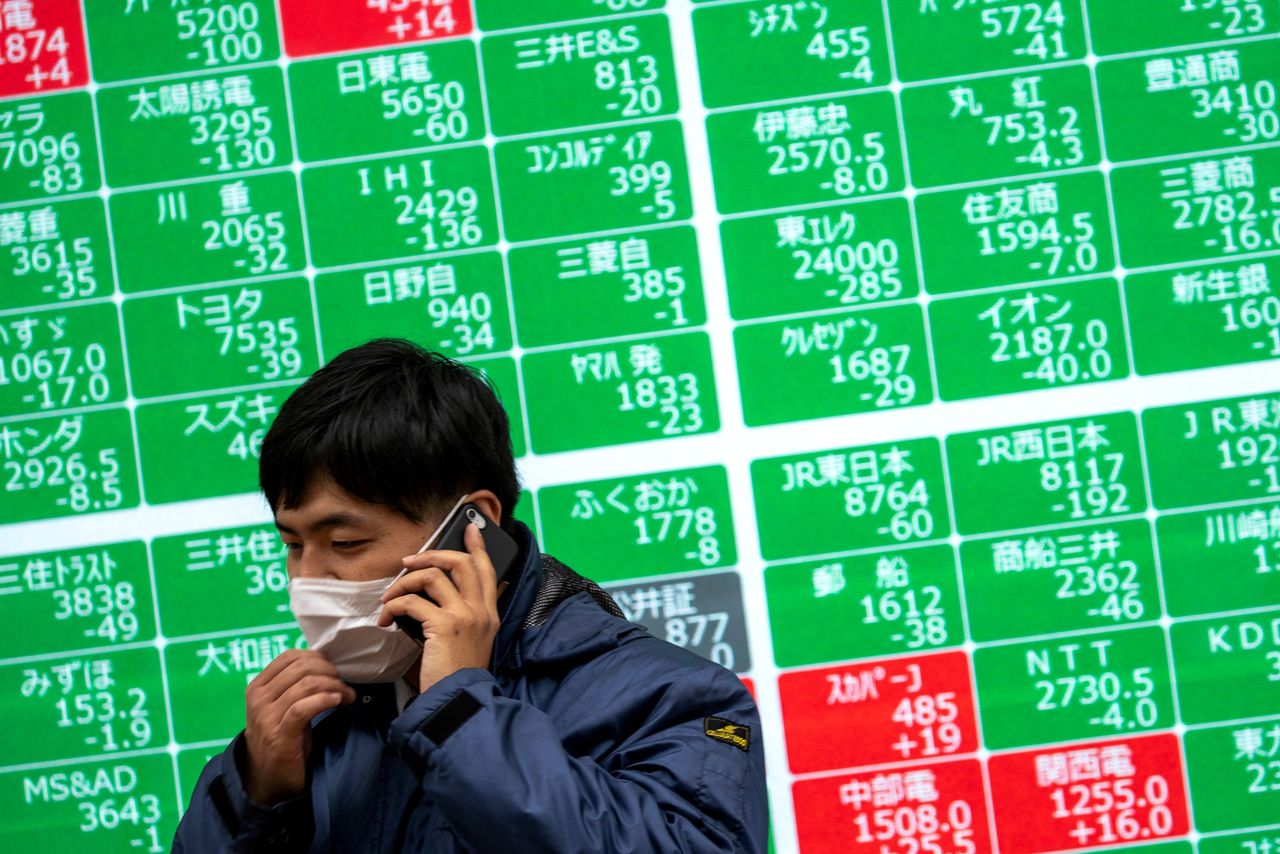 FILE PHOTO: A man wearing a protective face mask, following an outbreak of the coronavirus, talks on his mobile phone in front of a screen showing the Nikkei index outside a brokerage in Tokyo, Japan, February 26, 2020. REUTERS/Athit Perawongmetha

The upbeat economic news continued as China’s exports surged 155% in February compared with a year earlier when much of the economy shut down to fight the coronavirus.

“With the Senate’s passage, we expect growth momentum to accelerate and forecast global GDP growth will surge to a 7.5% annualised rate in the middle quarters of the year,” said JPMorgan economists in a note.

“Every $1 trillion of fiscal stimulus adds around $4-$5 to EPS, implying 6-7% upside for the remainder of the year.”

However, analysts also expected a sharp acceleration in inflation, stoked in part by the latest spike in oil prices, which was pushing up bond yields and stretching equity valuations, particularly in the high tech space.

MSCI’s broadest index of Asia-Pacific shares outside Japan followed with a fall of 0.5%, while Chinese blue chips shed 0.9%.

Equity investors had taken heart from U.S. data showing nonfarm payrolls surged by 379,000 jobs last month, while the jobless rate dipped to 6.2% in a positive sign for incomes, spending and corporate earnings.

U.S. Treasury Secretary Janet Yellen tried to counter inflation concerns by noting the true unemployment rate was nearer 10% and there was still plenty of slack in the labour market.

Yet yields on U.S. 10-year Treasuries still hit a one-year high of 1.625% in the wake of the data, and stood at 1.59% on Monday. Yields increased a hefty 16 basis points for the week, while German yields actually dipped 4 basis points.

The European Central Bank meets on Thursday amid talk it will protest the recent rise in euro zone yields and perhaps mull ways to restrain further increases.

The diverging trajectory on yields boosted the dollar on the euro, which fell away to a three-month low of $1.1892, and was last pinned at $1.1904.

“Including the current proposed stimulus package and further upside from a second-half infrastructure bill, total U.S. fiscal support is six times greater than the EU recovery fund,” he said. “The Fed is also supportive with U.S. money supply growing two times faster than the Eurozone.”

The dollar index duly shot up to levels not seen since late November and was last at 92.057, well above its recent trough of 89.677.

The jump in yields has weighed on gold, which offers no fixed return, and left it at $1,705 an ounce and just above a nine-month low.

Oil prices were up the highest levels in more than a year after Yemen’s Houthi forces fired drones and missiles at the heart of Saudi Arabia’s oil industry on Sunday, raising concerns about production.

Prices had already been supported by a decision by OPEC and its allies not to increase supply in April. [O/R]