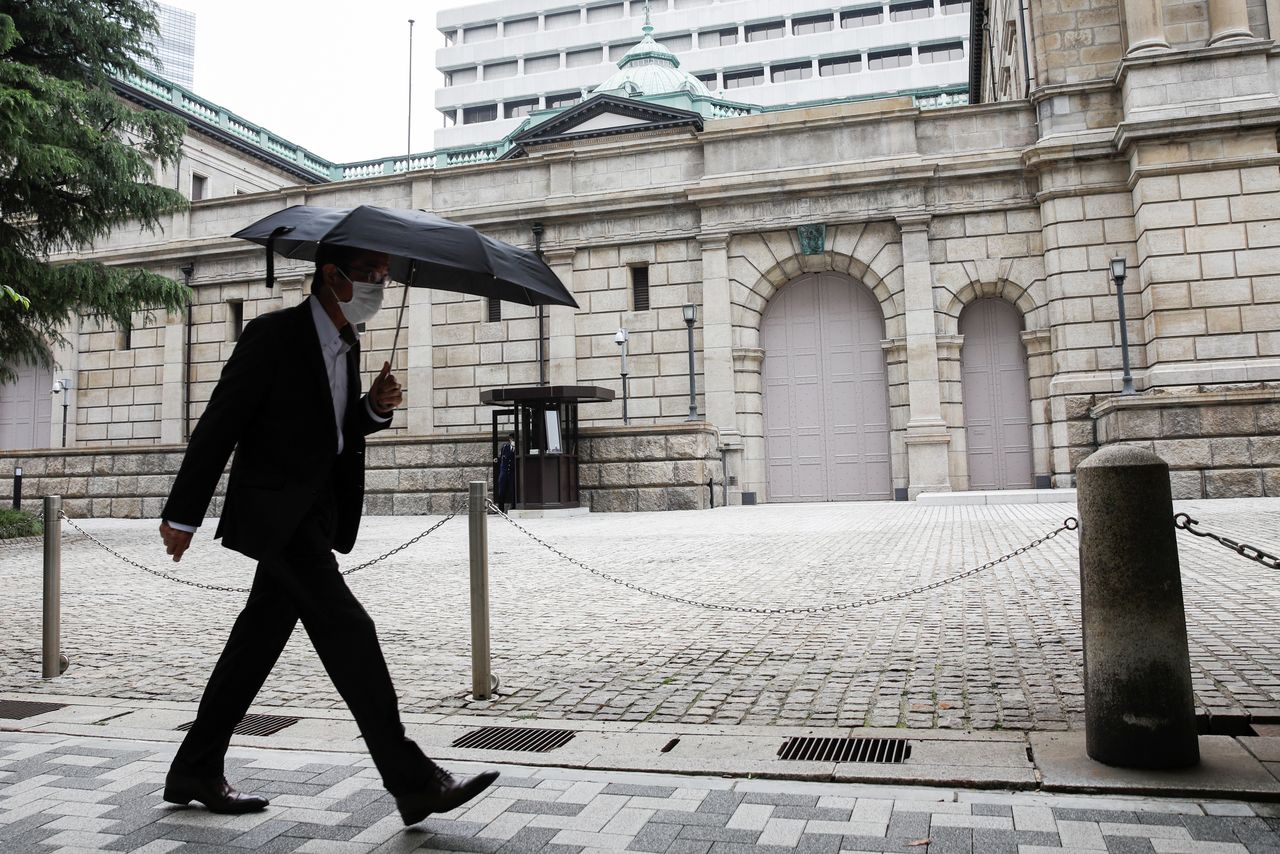 TOKYO (Reuters) - The Bank of Japan on Friday widened the band at which it allows long-term interest rates to move around its target, as part of a raft of measures to make its ultra-easy policy more sustainable amid a prolonged battle to fire up inflation.

As widely expected, the BOJ kept intact its target of -0.1% for short-term rates and 0% for the 10-year bond yield under its yield curve control policy.

“The widening of the range of the long-term interest rate is in line with expectations. On the ETF side, removing the 6 trillion yen target is not surprising as the BOJ has not bought ETFs as frequently as they used to do.

“It’s a very minor change. If the economy grows further and stock prices keep rising, then the BOJ is likely to allow the bond yield more flexibility to plus/minus 0.3% or something like that. The bank is likely to continue to stick to its 10-year JGB yield target of around 0% in that case.

“There’s a long way to go before we even get close to 2% inflation. What we need to see is a very clear sign that Japan’s inflation rate accelerates further than zero.”

“There’s no reason for the dollar-yen to react to the latest results of the BOJ assessment because it’s almost in line with what the media reported in advance.

“It doesn’t change much in the way of the BOJ’s purchase of ETFs. In its assessment, the BOJ said its ETF purchase is more effective when the volatility is high, uncertainty is high. So in that case, the larger the purchases, the larger the effect.”

“From the currency market perspective, there were no particular surprises. The BOJ has simply explored options within the current framework of its easy policy.

“There is not an iota of evidence that the BOJ studied the exit strategy, which yen-selling speculators would fear the most. They will realise there is no need to buy back the yen.

“The yen firmed a little bit after the BOJ’s announcement that it will widen its bond-yield trading band, but the yen’s strength didn’t last long. Soon the yen will return to a downtrend.”

“One thing that the central bank did do is they made some tweaks to their various bank lending facilities. But these are just tweaks and I don’t think that they’re going to change the trajectory of the Japanese economy.”

“The BOJ addressed the side effects of its existing policies in various ways, but I don’t expect any kind of special reaction to that.”

“The bank may allow the band at which long-term interest rates are moving to be a bit wider or it could be guided higher up, or the zero-interest rate target may be dropped. Under its current policies, the BOJ has a long-term rate target and conducts yield curve control, so I think its next operation will focus on moving the yield curve higher.”

“There’s not much of a takeaway and I think that explains the non-reaction. This is exactly how we expected markets to react. A 5-basis-point increase in the band limit is hardly material.

“There are a lot of policy tweaks there, but none of that seems significant. The BoJ has introduced a new fixed-rate operation for consecutive days and that again is not significant.”

“The BOJ’s widening the band for the long-term yield fluctuation was aimed to steepen the yield curb, which would help financial institutions’ profit. But it was a minor tweak as widening the band further could be taken as the central bank’s unwinding stimulus steps.

“The central bank will likely buy ETFs only when it judges necessary, while the BOJ kept its purchase upper limit of 12 trillion yen to show the bank is committed to stimulus policy.

“One big focus was that the BOJ adopted interest scheme of lending programme for private financial institutions and that is aimed to ease side-effects from the BOJ’s low-interest-rate policy.”

“The BOJ’s announcement on its ETF buying was largely in line with expectations and should not have a negative impact on the market. What did have an impact though was that it will limit its ETF buying to those linked to Topix. This led to a drop in heavyweights in the Nikkei average such as Fast Retailing as well as the Nikkei itself.”

Japan’s economy grew an annualised 12.7% in October-December on robust exports, extending a recovery from its worst post-war recession triggered by the coronavirus pandemic. But analysts expect the economy to contract in the current quarter, as curbs to prevent the spread of the virus hurts consumption.

Under a policy dubbed yield curve control, the BOJ targets short-term interest rates at -0.1% and the 10-year bond yield around 0%. It also buys risky assets such as exchange-traded funds (ETF) as part of efforts to fire up inflation.

Data released earlier on Friday showed core consumer prices slowed for a second straight month in February, as rising fuel costs offset some of the downward pressure from sluggish household spending due to the coronavirus pandemic.