Waves, smiles but no cheers as Olympic torch relay kicks off under pandemic shadow

FUKUSHIMA/TOKYO, Japan (Reuters) - With waves, smiles and streamers, but no cheers, the Olympic torch relay kicked off on Thursday, beginning a four-month countdown to the postponed 2020 summer Games in Tokyo, the first ever organised during a deadly pandemic.

Casting a pall over celebrations already scaled back because of coronavirus measures, North Korea launched two short-range ballistic missiles before the relay began in Fukushima, an area hit hard by the 2011 earthquake, tsunami and nuclear disaster.

“For the past year, as the entire world underwent a difficult period, the Olympic flame was kept alive quietly but powerfully,” Tokyo 2020 president Seiko Hashimoto said at an opening ceremony closed to spectators.

“The small flame did not lose hope, and just like the cherry blossom buds that are ready to bloom, it was waiting for this day,” Hashimoto said.

Foreign spectators won’t be allowed in stadiums and it remains unclear how many Japanese will be permitted to attend.

With organisers billing the games as the “Recovery Olympics,” a nod to the disaster as well as the pandemic, Thursday’s runners included many evacuees who fled their homes after the meltdowns at the Fukushima Dai-ichi power plant.

“This town is where I was born and raised, and I never thought a torch relay would be held here,” said Takumi Ito, 31, in Futaba, one of the towns worst hit by the nuclear disaster.

“We are still in the coronavirus pandemic, but I think it’s great we could hold the relay.”

Japan has fared better than most countries, with about 9,000 coronavirus deaths, but Tokyo reported 420 cases on Wednesday, the highest single-day figure this month. Polls show the majority of the public oppose holding the Olympics as scheduled.

About 10,000 runners will take part in the four-month relay, which will go through all Japan’s 47 prefectures.

NO CROWDS OR CHEERING

The relay, culminating with the Olympic opening ceremony on July 23, has been hit by several high-profile runner cancellations as celebrities and top-level athletes have pulled out, citing late notice and worries over the pandemic.

The brief, solemn opening ceremony was held at J-Village in Fukushima, a sports complex converted into a staging ground for workers decommissioning the crippled nuclear power plant.

“For the torch relay viewing, please ensure you are wearing a mask, keep proper distance, don’t stand close to each other and support with things like clapping, instead of using a loud voice,” an announcer said.

Low-key events featuring Fukushima residents in drum and dance performances were followed by a children’s choir before the Olympic flame, flown in from Greece last year and kept alight under 24-hour guard, was used to ignite the torch.

Members of the Japanese women’s soccer team were the first to run with the flame, wearing white uniforms decorated with red.

The number of spectators, some waving Olympic flags or carp-shaped cloth streamers, increased throughout the day, ranging from nursery school children in colourful caps to elderly people clapping in front of flowering spring trees.

Most stood far apart from each other on the side of the road and wore masks.

Some runners grinned and posed as they handed off the torch, waving, while others set off to the beat of traditional Japanese drums. One man pushed himself in a wheelchair, the torch mounted in a bracket.

‘YOU MUST BE JOKING’

Though Games organisers in Tokyo and Lausanne insist the Olympics will go ahead, doctors and nurses have complained about the strain on hospitals and experts warn about the spread of virus variants.

Japan was the last of the Group of Seven industrialised nations to launch a vaccine drive. Only 700,000 people have been inoculated so far, mostly medical workers.

After the torch relay finished for the day, dozens of protesters gathered in downtown Tokyo, holding placards calling on Japan to scrap the event.

Toshio Miyazaki, 60, who organised the anti-Olympics rally, said he was worried about the spread of the virus due to visiting athletes and officials.

“It’s meaningless to hold the Olympics that no one supports,” said Miyazaki, who works for Tokyo’s metropolitan government.

Japan has spent nearly $300 billion to revive the Fukushima region, but many locals are apprehensive about the Games, as some areas remain off-limits, worries about radiation linger and many have settled elsewhere. Decommissioning of the stricken plant will take up to a century.

“But there are still many people who can’t return to their homes, and many difficult issues such as reviving these areas and rebuilding the lives of their residents,” he said.

A protester driving a van near the relay shouted over a loudspeaker, questioning how the Olympics could contribute to the region’s recovery.

“You must be joking,” the man yelled. “Everyone knows we can’t have the Olympics.” 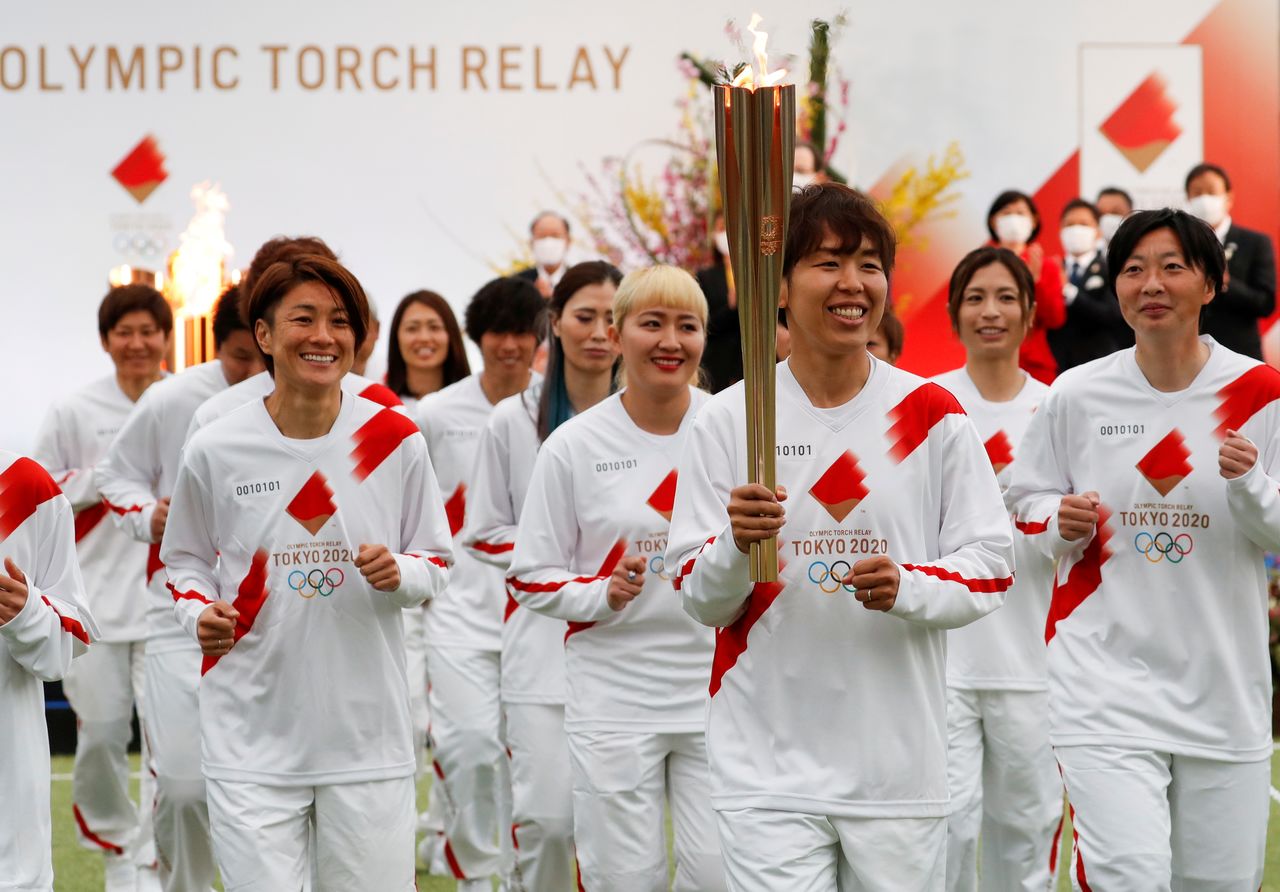 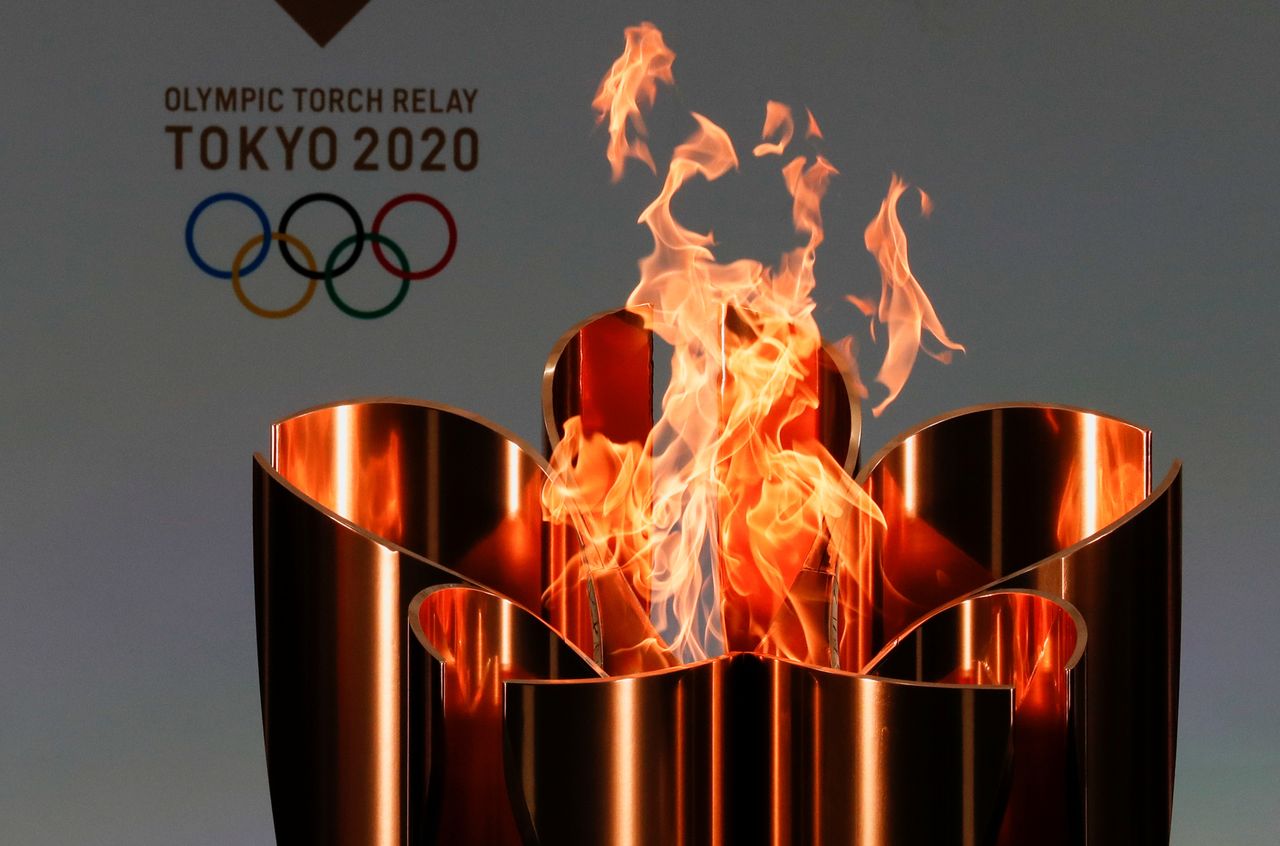 The celebration cauldron is lit on the first day of the Tokyo 2020 Olympic torch relay in Naraha, Fukushima prefecture, Japan March 25, 2021. REUTERS/Kim Kyung-Hoon/Pool 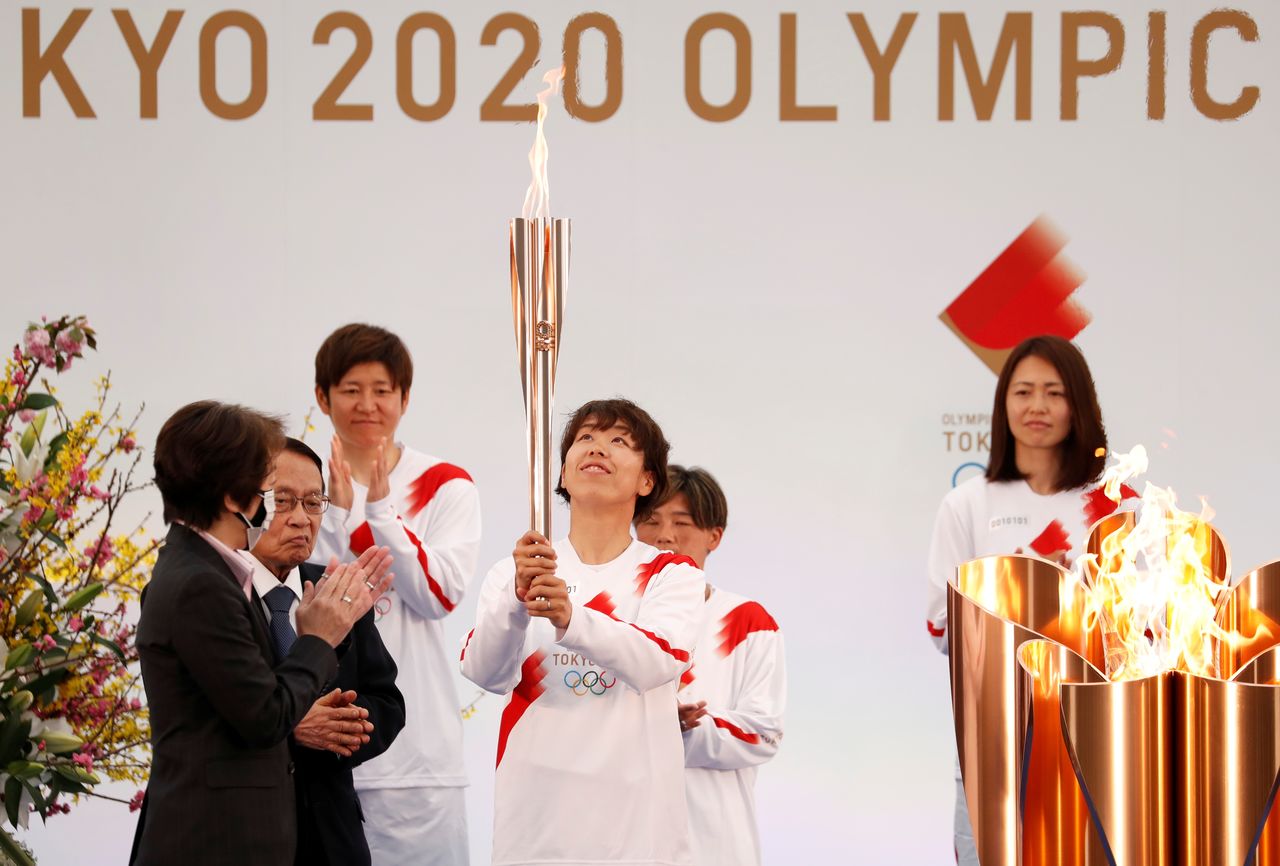 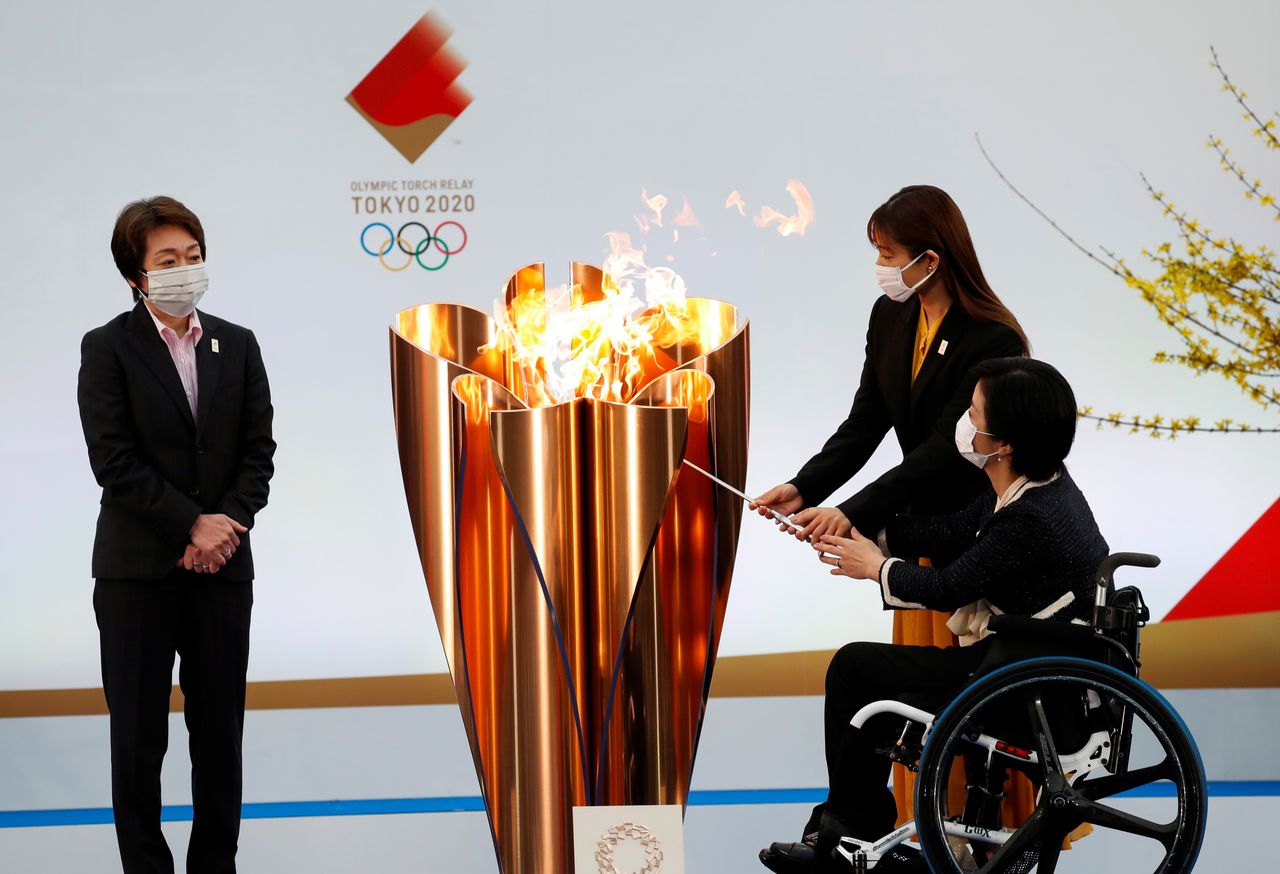 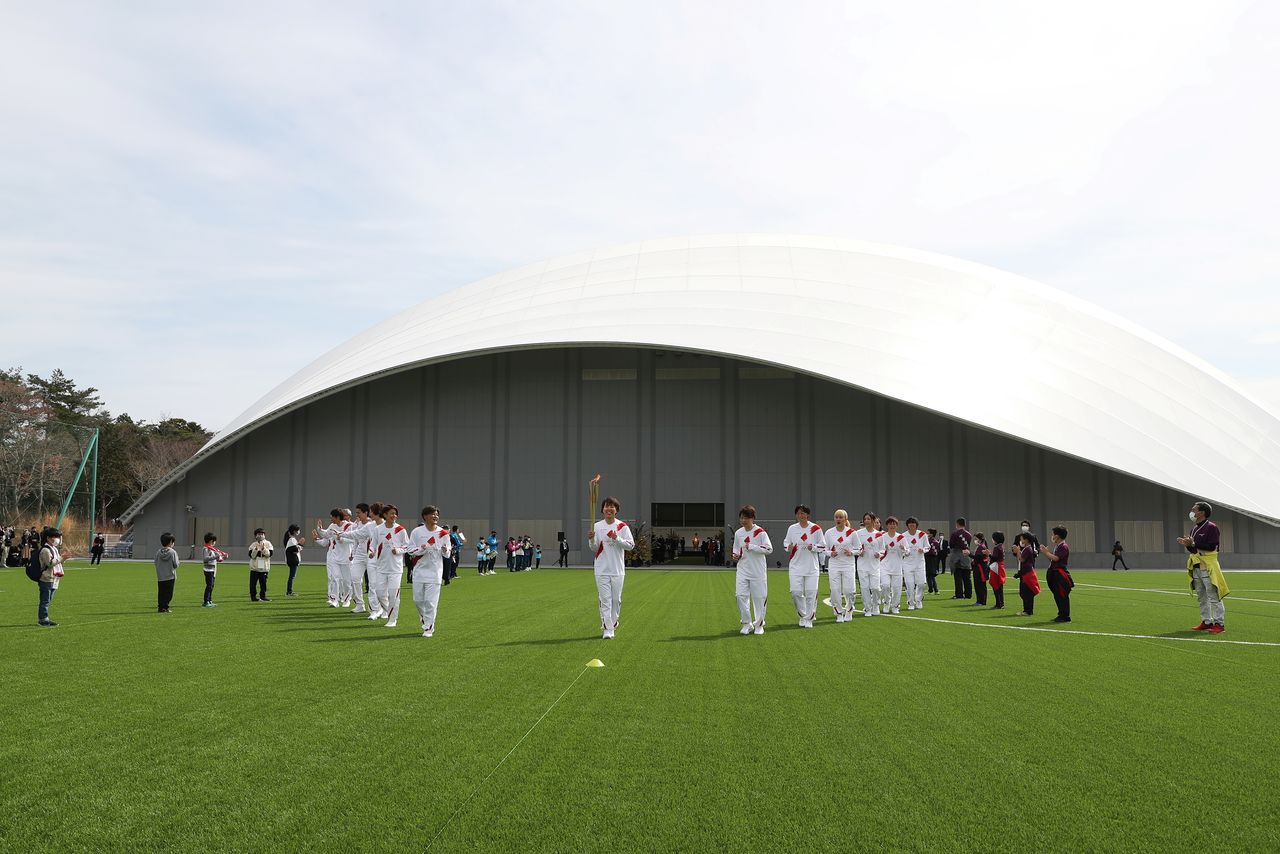 Azusa Iwashimizu (C) and other members of the Japan women’s national football team run as torchbearers in the first leg of the torch relay for the Tokyo Olympic Games at the J-Village National Training Center in Fukushima prefecture, Japan, March 25, 2021. Du Xiaoyi/Pool via REUTERS 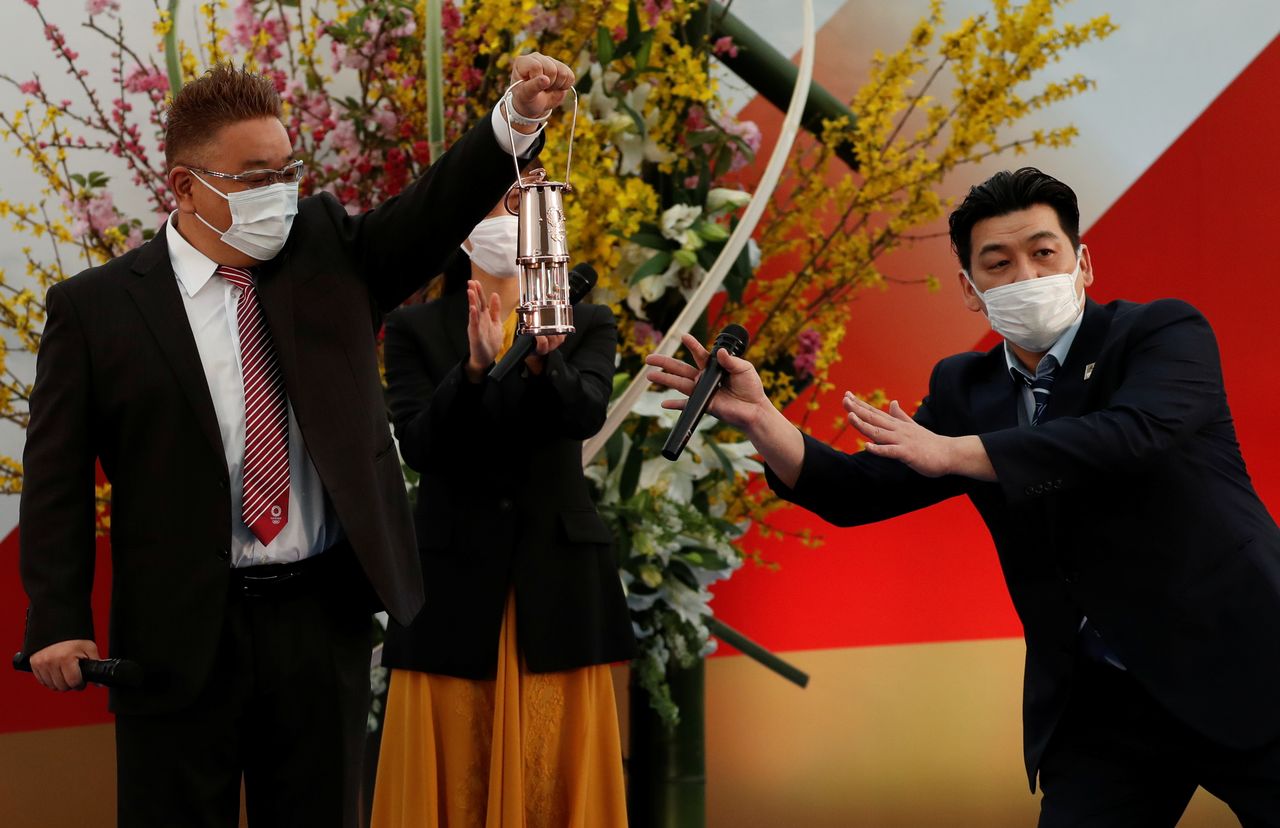 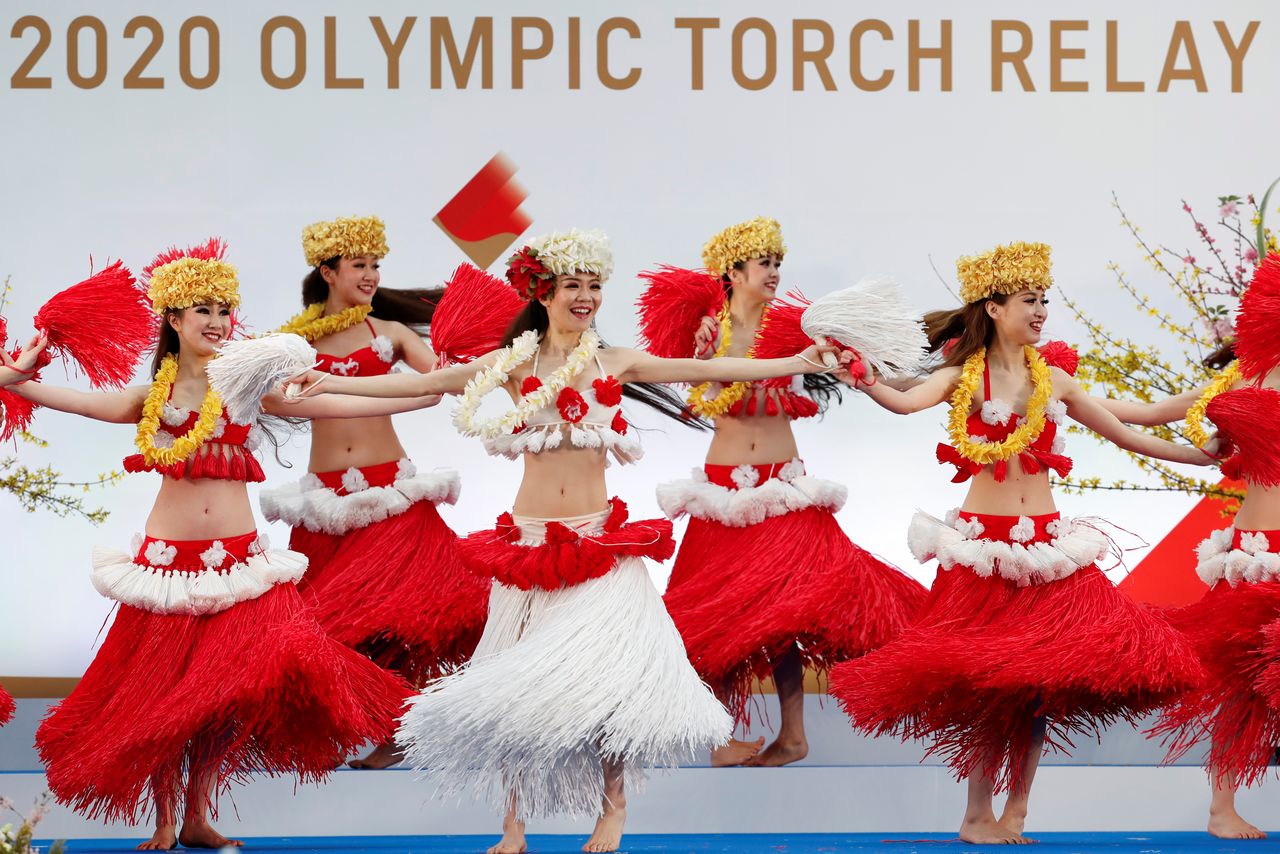 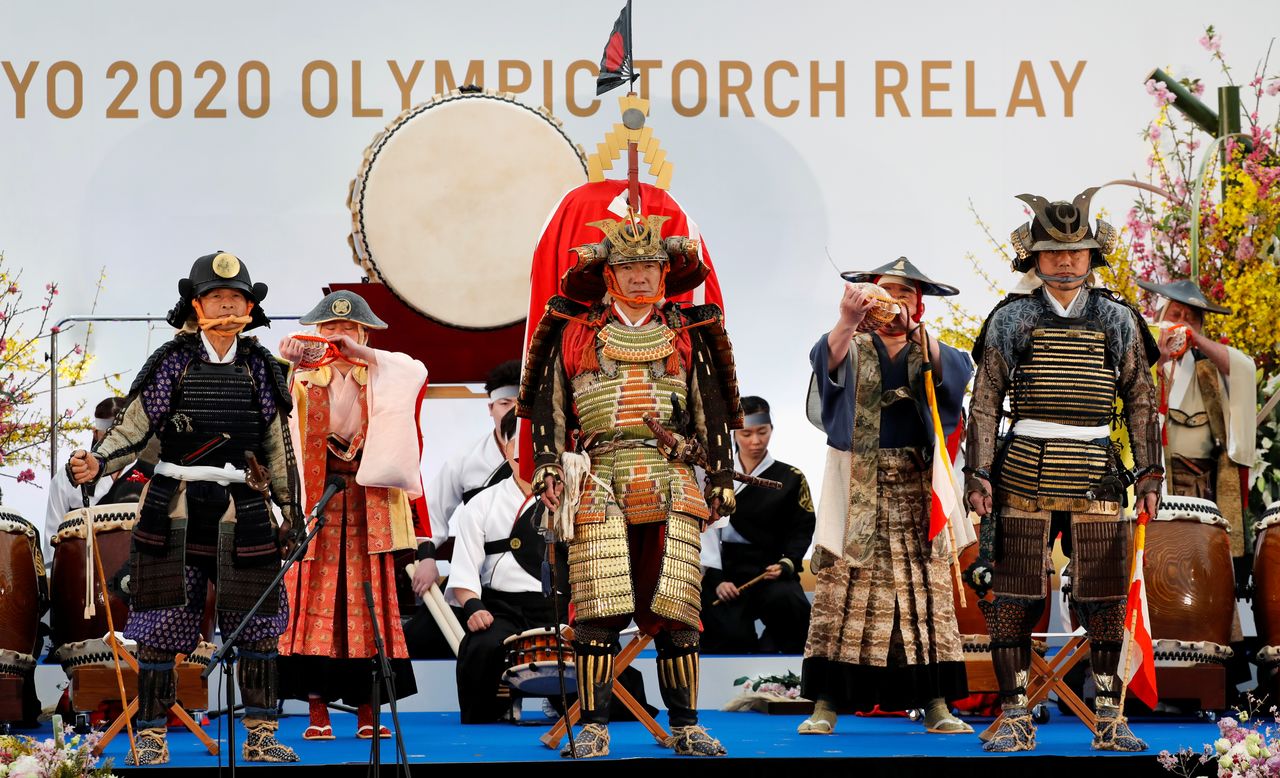 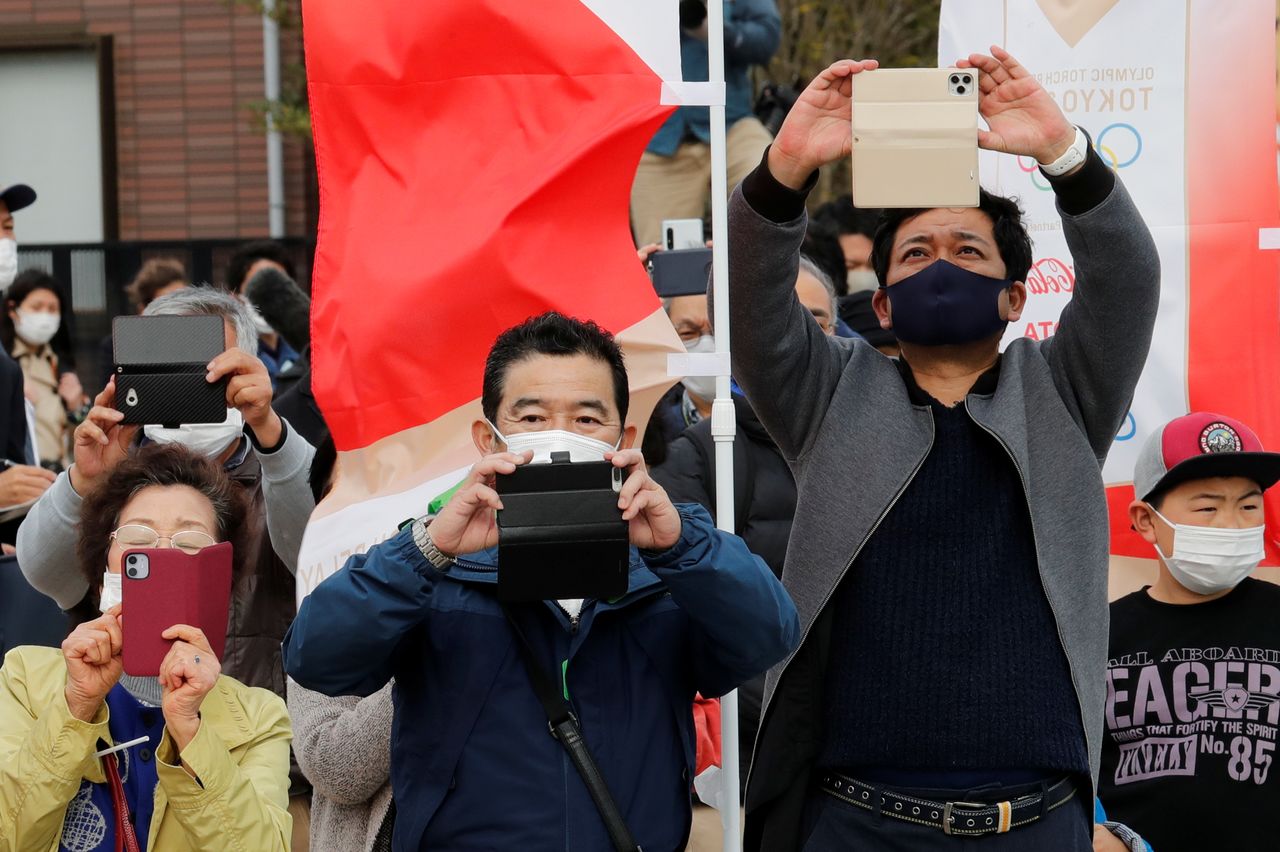 People take pictures of the torch bearer as she runs past Futaba station, inside one of the difficult-to-return zones set since Fukushima’s 2011 nuclear disaster, on the first day of the Tokyo 2020 Olympic torch relay, in Futaba, Fukushima Prefecture, Japan March 25, 2021. REUTERS/Kim Kyung-Hoon