Explainer: How a giant container ship is blocking the Suez Canal 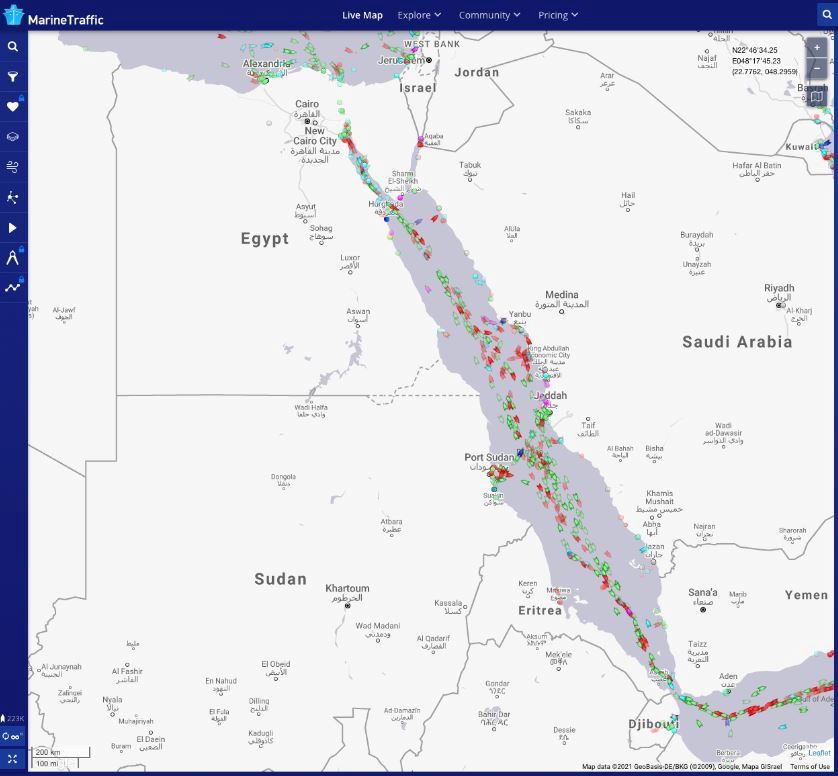 A map shows a traffic jam in the Suez Canal, Egypt March 25, 2021. Marine Traffic/Handout via REUTERS ATTENTION EDITORS - THIS IMAGE HAS BEEN SUPPLIED BY A THIRD PARTY. MANDATORY CREDIT. NO RESALES. NO ARCHIVES.

CAIRO (Reuters) - A huge container ship has run aground and is blocking traffic in the Suez Canal, one of the world’s busiest waterways and the shortest shipping route between Europe and Asia.

HOW DID THE SHIP GET STUCK?

The 400 metre-long Ever Given container ship ran aground early on March 23 as it travelled north from the Red Sea towards the Mediterranean, twisting diagonally across the width of the canal.

The principal causes were high winds and a sand storm that reduced visibility and rendered the ship unable to keep a straight course through the channel, according to the Suez Canal Authority (SCA). As the incident happened, stormy weather was buffeting Egypt, forcing the closure of several Mediterranean and Red Sea ports.

When ships enter the Suez Canal, they are boarded and steered through in convoys, with the help of one or two tugs. Occasionally they get stuck but are usually freed quickly with little impact on other shipping.

WHY HAS TRAFFIC BEEN HALTED?

The Ever Given is blocking the southernmost stretch of the canal which has a single lane, meaning no other ships can pass.

In 2015, Egypt opened a second lane for simultaneous two-way traffic on a 35 km (22 mile) stretch of the canal, but the extension lies further north, beyond an area where the canal widens into the Great Bitter Lake.

The SCA allowed a convoy of ships to enter the canal from its northern end at Port Said on March 24, hoping that the Ever Given would soon be freed, but the vessels have dropped anchor in a Great Bitter Lake waiting area.

WHAT IS BEING DONE TO FREE THE SHIP?

At least eight tug boats, one with a towing power of 160 tons, have been trying to free the ship by pushing and pulling it away from the banks, with the help of the ship’s own winches.

Diggers have been clearing earth at the ship’s bow, which was buried in the canal’s eastern bank, and the SCA has deployed two dredgers.

Local maritime sources said ballast water, which is used to help stabilise ships, had been offloaded from the Ever Given amid efforts to refloat it.

WHAT ELSE COULD BE TRIED?

The ship’s owner has appointed two professional rescue teams from Dutch firm Smit Salvage and Japan’s Nippon Salvage to help “design a more effective plan” to refloat the Ever Given.

Martijn Schuttevaer, spokesman for Smit Salvage’s parent company Boskalis, said additional vessels could be deployed alongside the tugs, but a calculation would be needed on how much power could be used without damaging the container ship.

Further options include dredging underneath the ship and offloading containers, though shipping sources say removing cargo could be a lengthy and complex logistical operation given the size of the ship and its position.

(Reporting by Yusri Mohamed in Islmailia, Nadine Awadalla in Cairo and Anthony Deutsch in Amsterdam; Writing by Aidan Lewis; Editing by Alison Williams)