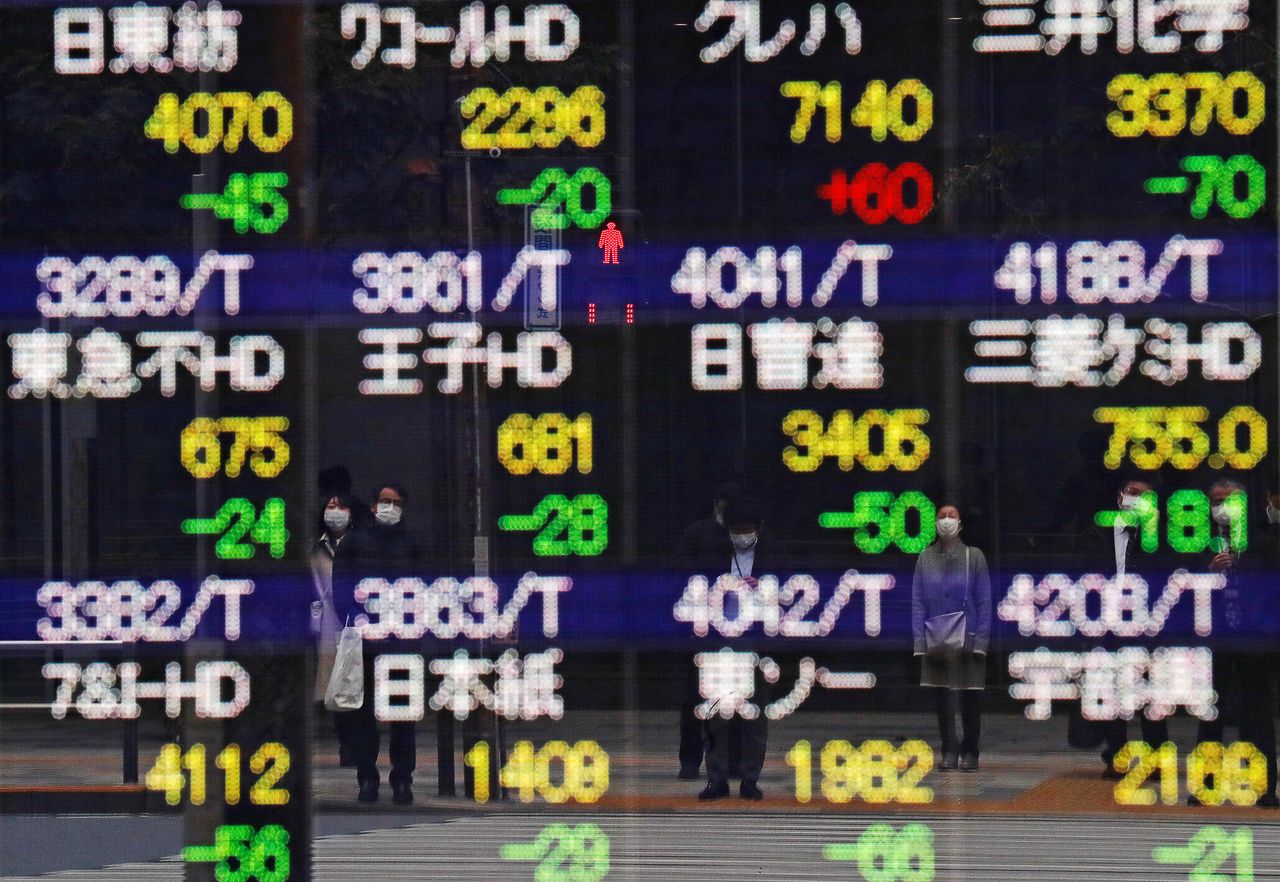 FILE PHOTO: Pedestrians and a traffic light stop sign are reflected on a quotation board in Tokyo, Japan February 26, 2021. REUTERS/Kim Kyung-Hoon

TOKYO (Reuters) - Global shares bounced back on Friday, with Asian stocks recovering from a three-month low, as investors focused more on optimism about the global economic recovery than rising tensions between the West and China.

On Thursday, Chinese shares fell near a three-month low hit earlier in the month. The European Union joined Washington’s allies this week in imposing sanctions on officials in China’s Xinjiang region over allegations of human rights abuses, prompting retaliatory sanctions from Beijing.

“All the sanctions so far have been largely symbolic and should have little economic impact. But the Sino-U.S. confrontation is affecting market sentiment. It could take some time for them to come to any compromise,” said Yasutada Suzuki, head of emerging market investment at Sumitomo Mitsui Bank.

Japan’s Nikkei rose 1.47% after Wall Street shares staged a rally, driven by cheap, cyclical stocks that have been battered by the pandemic.

“It’s month-end, quarter-end and for Japanese players, financial year-end, so we are seeing random flows from all kinds of players,” said Masanari Takada, cross asset strategist at Nomura Securities.

“But on the whole, those who were leading reflation trade based on their positive view on the Chinese economy are now closing their positions while those who didn’t get to ride on that wave are looking to see whether they should buy on dips.”

While markets were being driven more by various end-of-quarter trades than news flow, analysts noted overnight headlines were mostly supportive for stocks.

U.S. Labor Department data showed claims for unemployment benefits dropped to a one-year low last week, a sign that the U.S. economy is on the verge of stronger growth as the public health situation improves.

In his first formal news conference, U.S. President Joe Biden said that he would double his administration’s vaccination rollout plan after reaching the previous goal of 100 million shots 42 days ahead of schedule.

But while improvement in the U.S. health crisis has underpinned risk appetite globally, investors are increasingly alarmed by a divergence in health conditions.

“Vaccination in continental Europe is falling behind the schedule. Relative to the U.S., economic reopenings will likely be delayed as some countries are forced to impose lockdowns,” said Soichiro Matsumoto, chief investment officer, Japan, at Credit Suisse’s private banking unit in Tokyo.

That put pressure on the euro, which licked its wounds at $1.1782 after falling as low as $1.1762 overnight, its lowest levels since November.

The index of the U.S. currency stood near its highest level since mid-November, having gained 2.0% so far this month.

Oil prices rebounded a tad from a 4% drop on Thursday, though they are on course for their third straight week of losses on worries about a further reduction in demand. [O/R]

In addition to Europe, major developing economies such as Brazil and India are also struggling with a resurgence in COVID-19 cases.

The market still drew some support from concerns about supply disruption as a stranded container ship in the Suez Canal may block the vital shipping lane for weeks.