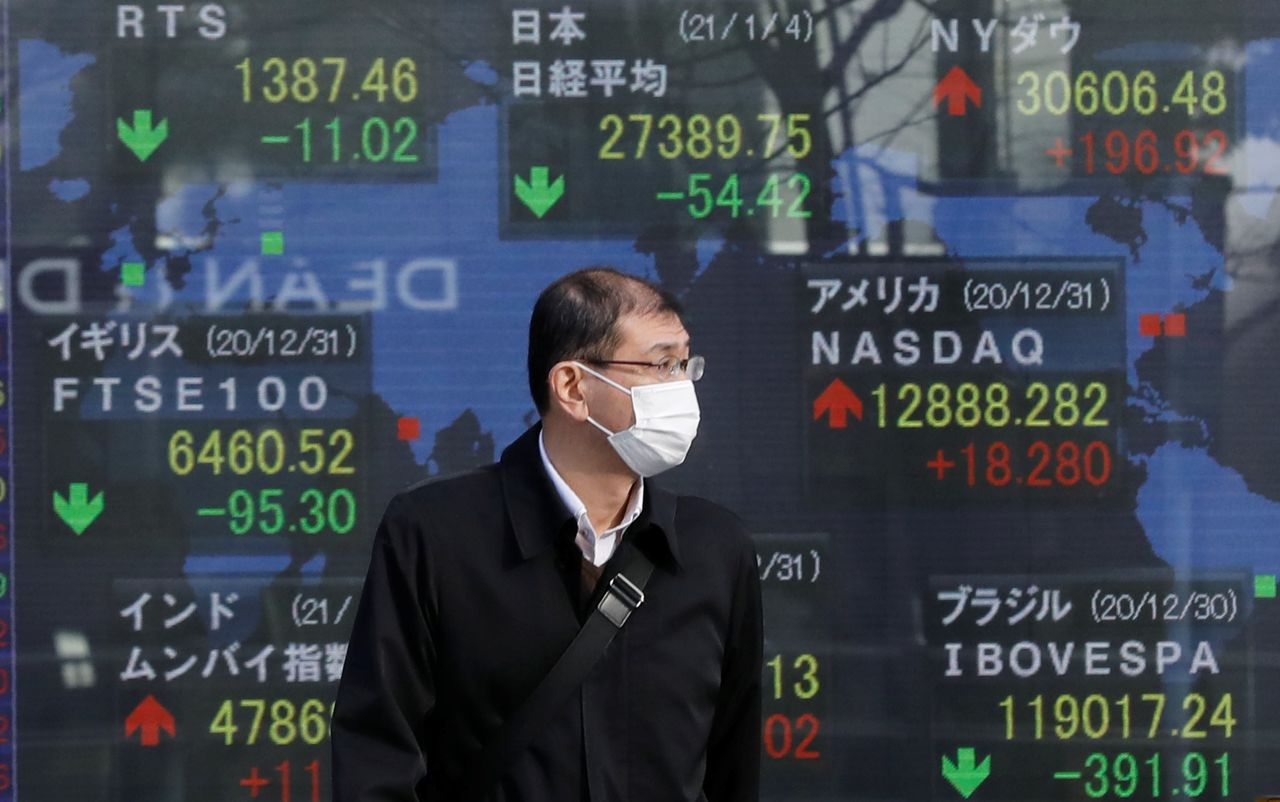 FILE PHOTO: A man wearing a facial mask, following the coronavirus disease (COVID-19) outbreak, stands in front of an electric board showing Nikkei (top in C) and other countries stock index outside a brokerage at a business district in Tokyo, Japan, January 4, 2021. REUTERS/Kim Kyung-Hoon

By Danilo Masoni and Wayne Cole

MILAN/SYDNEY (Reuters) -World shares started the week on cautious ground as uncertainty over the fallout of the default of a U.S. hedge fund tempered relief from the refloating of the ship blocking the Suez Canal.

Banks Nomura and Credit Suisse warned on Monday they were facing significant losses after the hedge fund, named by sources as Archegos Capital, defaulted on margin calls.

Investors were bracing for further block trades causing volatility in markets after a $20 billion worth of fire sales on Friday reportedly linked to Archegos hit shares in some big U.S. media and Chinese tech companies.

Developments in the Suez Canal however raised hopes that the vital waterway could reopen and ease global shipping backlogs, sending oil prices lower and offering support to stocks, while currency markets were largely unaffected by Archegos worries.

The MSCI world equity index, which tracks shares in 49 countries, was just above parity by 0809 GMT, while U.S. and euro zone volatility gauges picked up from last week’s lows.

After a mixed performance in Asia overnight, European shares were flat in morning deals, while stock futures pointed to a 0.6% decline for Wall Street later in the day.

“However, in our universe of bonds and money markets and FX, investors aren’t batting an eyelash,” he added in a note.

Credit Suisse shares were set for their worst day in one year, down 13%, while Nomura fell 16% in its largest drop on record, limiting gains for Japanese shares.

Markets were also looking to President Joe Biden to outline his infrastructure spending plans this week, which could supercharge an already accelerating U.S. recovery.

“We expect the global economy to expand robustly at 6.4% this year, fuelled by a large U.S. fiscal stimulus, with positive spillovers for the rest of the world,” said Barclays economist Christian Keller in London.

“Rising inflation over the coming months should be transitory, and core central banks seem committed to looking through it,” he added.

The prospect of faster U.S. economic growth has spurred speculation of rising inflation and weighed on Treasury prices.

European yields have been restrained by active buying from the European Central Bank, widening the dollar’s yield advantage over the euro. The single currency was last little changed at $1.179, just above a five-month low hit last week.

The dollar index dipped 0.05% at 92.739, after reaching its highest since mid-November last week.

Oil prices eased as markets bet the refloating of the Ever Given would allow tankers to use the waterway again. There were over 300 vessels waiting to pass through the shipping route which accounts for 12% of global trade.

The market will also be cautious ahead of an OPEC meeting this week, which will have to decide whether to extend supply limits, or loosen the spigots. [O/R]