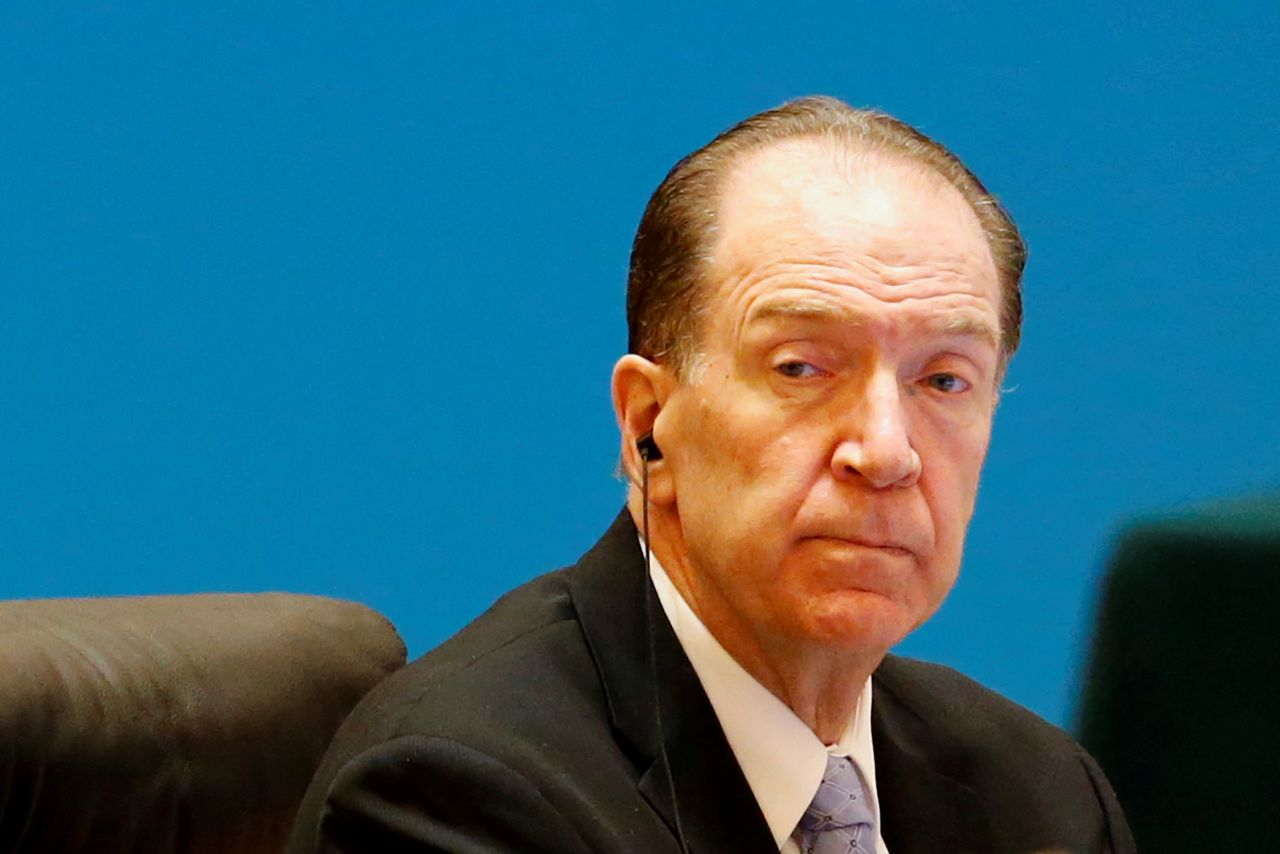 WASHINGTON (Reuters) -World Bank President David Malpass said on Monday he expects China, the United States and other Group of 20 major economies to extend a freeze in bilateral debt service payments through the end of 2021 when they meet this week.

The G20 Debt Service Suspension Initiative (DSSI) has already helped countries defer some $5.7 billion in payments through the end of 2020, with another $7.3 billion in deferred payments expected through June, according to World Bank data.

Extending the debt payment freeze through year-end would save even more money that countries could use to combat the COVID-19 pandemic and support their economies, Malpass told reporters, but gave no specific estimate.

He said G20 members would probably stipulate that such an extension would be the “last or final” one offered.

Doing so would incentivize countries to move toward more “permanent solutions to their debt situations,” including through the G20 Common Framework for debt treatments, the World Bank and International Monetary Fund said in a joint paper https://www.devcommittee.org/sites/dc/files/download/Documents/2021-03/DC2021-0002%20Debt%20final.pdf prepared for their spring meetings this week.

While the temporary freeze in debt payments would help, Malpass said “actual debt relief” would be needed in the longer term to allow the poorest countries to reduce their unsustainable debt burdens to a more moderate level.

The IMF-World Bank paper said low-income countries were still building their understanding of and confidence in the Common Framework, which could limit its initial utilization.

It said extending the DSSI debt freeze would give time for the framework process to become fully operational, but it might also delay “difficult-but-necessary restructuring decisions” for some countries.

So far, it said, only three countries - Zambia, Ethiopia and Chad - had requested a debt treatment under the common framework agreed by G20 members and the Paris Club of official bilateral creditors, but 35 countries were now assessed to be “at high risk of debt distress or in debt distress.”

Malpass said China - the world’s largest official bilateral creditor, by far - had shown receptivity to international engagement on the need for greater transparency, as seen in G20 discussions on the issue in 2020, but more work was needed.

“We’re making some progress, but I think much more needs to be made,” Malpass said during a roundtable at the start of the spring meetings.

Malpass said the World Bank’s top priority was replenishing the resources of the International Development Association, its arm for assisting the poorest countries, which it aims to achieve by December.

There could also be scope for a selective capital increase to address specific needs resulting from the pandemic, he said.

Separately, the IMF said its executive board had approved a third tranche of grants for its 28 poorest member countries under the Catastrophe Containment and Relief Trust (CCRT) to cover all eligible debt service falling due to the IMF.

The grants, totalling $238 million, will cover those countries’ debt service payments to the IMF through Oct. 15, freeing up funds for them to spend on fighting the COVID-19 pandemic and mitigating its economic impact.

(Reporting by Andrea ShalalEditing by Peter Graff and Lisa Shumaker)