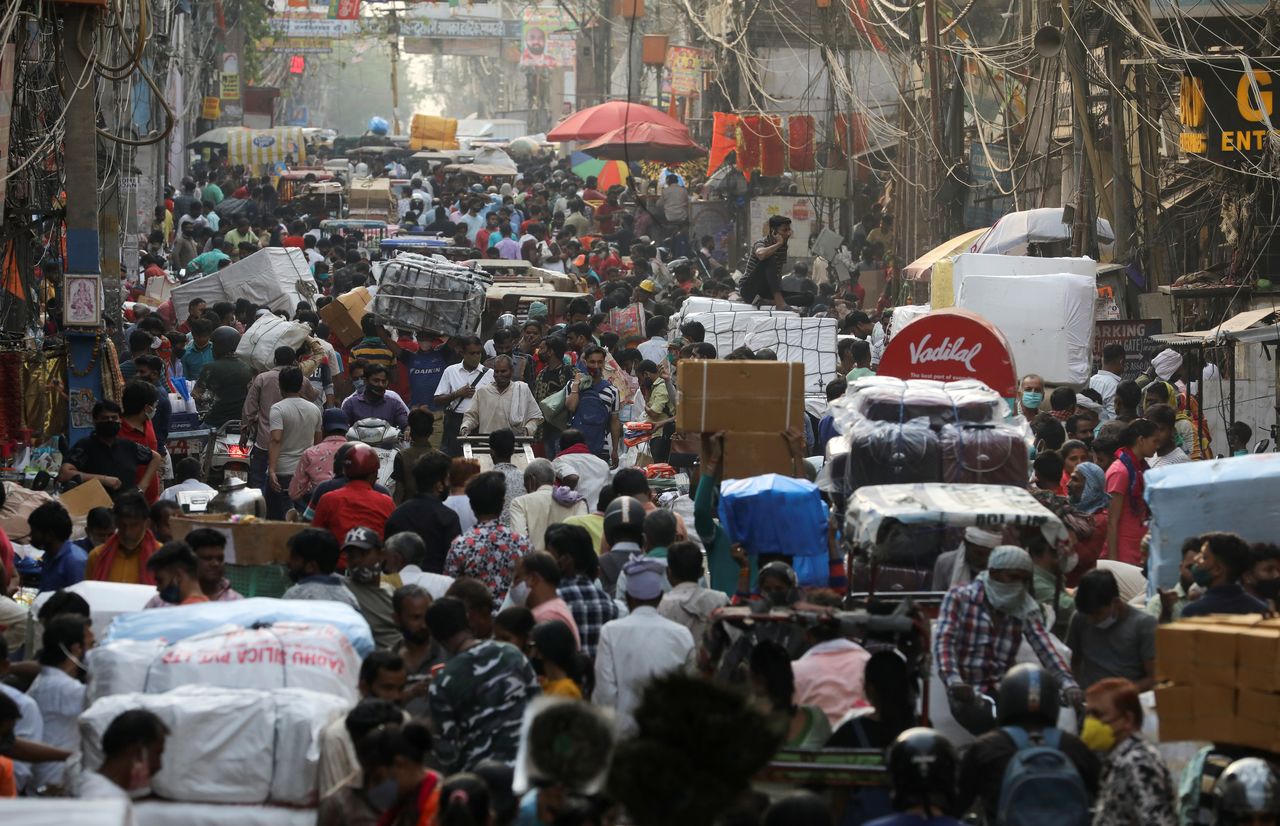 FILE PHOTO: People walk at a crowded market amidst the spread of the coronavirus disease (COVID-19), in the old quarters of Delhi, India, April 6, 2021. REUTERS/Anushree Fadnavis

Singapore (Reuters) - India, South Korea and Thailand faced mounting coronavirus infections on Thursday, undermining cautious hopes that Asia might be emerging from the worst of the pandemic as worries about safety threatened to delay vaccination drives.

India reported a record 126,789 new cases, the third day this week tallies have surged to more than 100,000, catching by surprise authorities who have blamed crowding and a reluctance to wear masks as shops and offices reopen.

More infectious variants of the virus may have played a role in India’s surge, some epidemiologists say, with hundreds of cases found of variants first detected in Britain, South Africa and Brazil.

The alarming numbers have led to New Zealand putting a temporary ban on anyone arriving from India, even for the first time blocking New Zealand citizens from coming home, for about two weeks.

“We are temporarily suspending entry into New Zealand for travellers from India,” Prime Minister Jacinda Ardern told a news conference in Auckland.

New Zealand, which has virtually eliminated the virus within its borders, recorded 23 new cases at its border on Thursday, 17 from India.

Two other countries that managed to largely keep the coronavirus under control during the first year of the pandemic were also grappling with new waves, though smaller than India’s.

Thailand, which has been planning a cautious re-opening of its tourist industry, reported a rise in new daily infections to 405 on Thursday, taking its total number of infections to 30,310, with 95 deaths.

Adding to Thai worries, it has detected 24 cases of a highly contagious virus variant first detected in Britain, its first reported domestic transmission of the variant.

Cases are also rising in parts of Europe but South America is the most worrying region of the world for infections, with cases mounting in nearly every country, the director of the Pan American Health Organization (PAHO) said on Wednesday.

Asia’s increasing cases comes as worries are growing over the safety of one of the most prominent vaccines aginst the virus.

The European Medicines Agency on Wednesday said it found rare cases of blood clots among some adult recipients of AstraZeneca Plc’s COVID-19 vaccine, although it said the vaccine’s advantages still outweighed the risks.

Both South Korea and the Philippines have suspended use of the vaccine for people under 60 because of possible links to blood clots, while Australia and Taiwan said they would continue to use it.

Worry about the vaccine could delay immunisation drives in Asia, some of which are already dogged by supply problems. Campaigns in most parts of Asia lag those in places like Britain and the United States.

Australia’s programme to vaccinate its near 26 million people is more than 80% behind its original schedule.

Authorities there had pledged to administer at least 4 million first doses by the end of March but could only deliver 670,000. The government blamed supply issues from Europe.

While India’s cases mount, vaccine centres in several parts of the country, including hardest-hit Maharashtra state, have been running out of supplies.

China, where the novel coronavirus emerged in late 2019, is driving ahead with its vaccination campaign, administering about 3.68 million doses on Wednesday, taking its total number of doses given to 149.07 million, authorities said.

Japan’s vaccinations are far behind those in most major economies, with only one vaccine approved and about 1 million people having received a first dose since February, even as it struggles with new cases.

Infections in Tokyo spiked by 545 cases on Thursday, adding to worries about the Olympics and Paralympics, delayed from last year and now due to start at the end of July.

The government scrambled to calm a social media furore saying it was not looking to prioritise vaccines for its Olympic athletes, dismissing a media report that it was considering doing so.

Japan is not insisting that arriving athletes be vaccinated but there will be frequent tests while they are in Japan. There will be no foreign spectators and a decision on domestic ones has yet to be made.