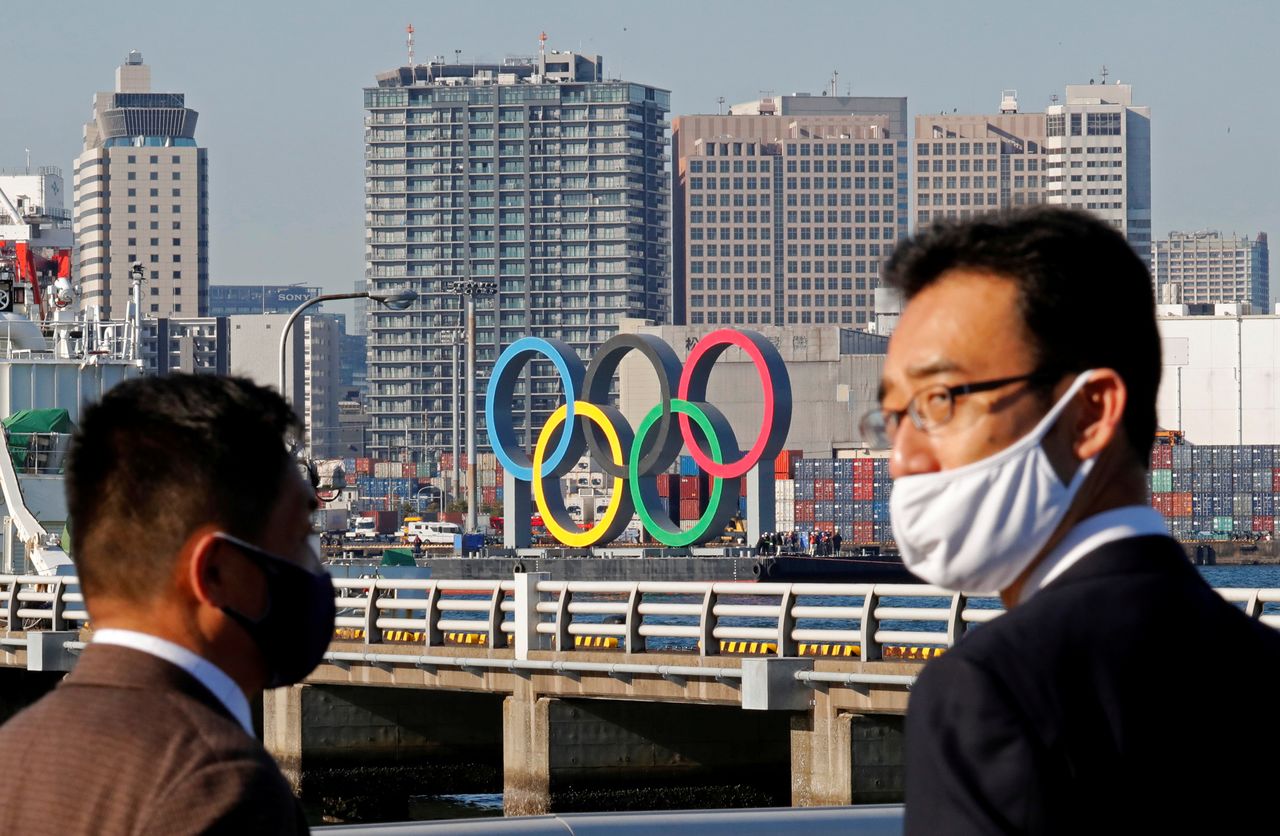 FILE PHOTO: Men wearing face masks watch as giant Olympic rings, which were temporarily taken down in August for maintenance amid the coronavirus disease (COVID-19) outbreak, are transported for reinstallation at the waterfront area at Odaiba Marine Park in Tokyo, Japan December 1, 2020. REUTERS/Kim Kyung-Hoon

By Kiyoshi Takenaka and Sam Nussey

TOKYO (Reuters) - A senior Japanese ruling party official said on Thursday that cancelling this year’s Olympics in Tokyo remains an option if the coronavirus crisis becomes too dire, dropping a bomb on a hot-button issue and sending social media into a frenzy.

The Tokyo Olympics Organising Committee responded with a statement saying all those involved in preparing for the Games remained fully focused on hosting them in the summer.

“If it seems impossible (to host the Olympics) any more, then we have to stop it, decisively,” Toshihiro Nikai, secretary general of the Liberal Democratic Party, said in comments to broadcaster TBS.

Cancellation is “of course” an option, he said, adding: “If the Olympics were to spread infection, then what are the Olympics for?”

With Japan in the midst of a fourth wave of coronavirus infections, doubts over whether Tokyo would be able to host the Summer Games - already an unpopular idea with the public - have resurfaced in recent weeks.

But government and organising officials have consistently said the Games would go ahead, and the fact that a ruling party heavyweight made the remark was enough to give his comments top billing on domestic news. “Olympics Cancelled” was trending on Twitter in Japan with nearly 50,000 tweets from users as of Thursday afternoon.

“If this person says it, Olympics cancellation looks like a reality,” tweeted @marumaru_clm in reference to Nikai, who is a key backer of Prime Minister Yoshihide Suga and is known for his frank comments.

Nikai later issued a written statement to explain his stance.

“I want the Tokyo Olympics and Paralympics to succeed,” the statement said. “At the same time, to the question of whether we would host the (Games) no matter what, that is not the case. That’s what I meant by my comments.”

Prime Minister Suga later side-stepped a reporter’s question on whether cancelling was indeed an option, saying only that the government remained committed to controlling the pandemic ahead of the Olympics.

“There’s no change to the government’s stance, to do everything possible to prevent the spread of infections as we head towards the Olympics,” he told reporters in Tokyo ahead of his trip to Washington to meet with U.S. President Joe Biden.

Japan is grappling with rising COVID-19 infections, with new cases in Tokyo jumping to 729 on Thursday, the most since early February. Tokyo, Osaka and several other prefectures entered a quasi-state of emergency this month, asking bars and restaurants to shorten their hours, and four more prefectures were set to be added, local media reported.

Preparations have included incorporating social distancing measures and other restrictions for the postponed Games, which are set to begin on July 23 and will be held without international spectators. A scaled-back torch relay is already underway.

“We’ll hold (the Games) in a way that’s feasible,” Taro Kono, a popular minister in charge of Japan’s vaccination drive, said on a separate TV programme, according to Kyodo News. “That may be without spectators,” he added.

Akira Koike, an opposition lawmaker with the Japanese Communist Party, reacted to Nikai’s comments on Twitter saying that holding the event was already “impossible” and that a swift decision on cancellation should be made.

Cancelling or postponing the Games would probably not hurt Japan’s economy much but would have a larger effect on Tokyo’s service sector, a senior International Monetary Fund official said on Wednesday.