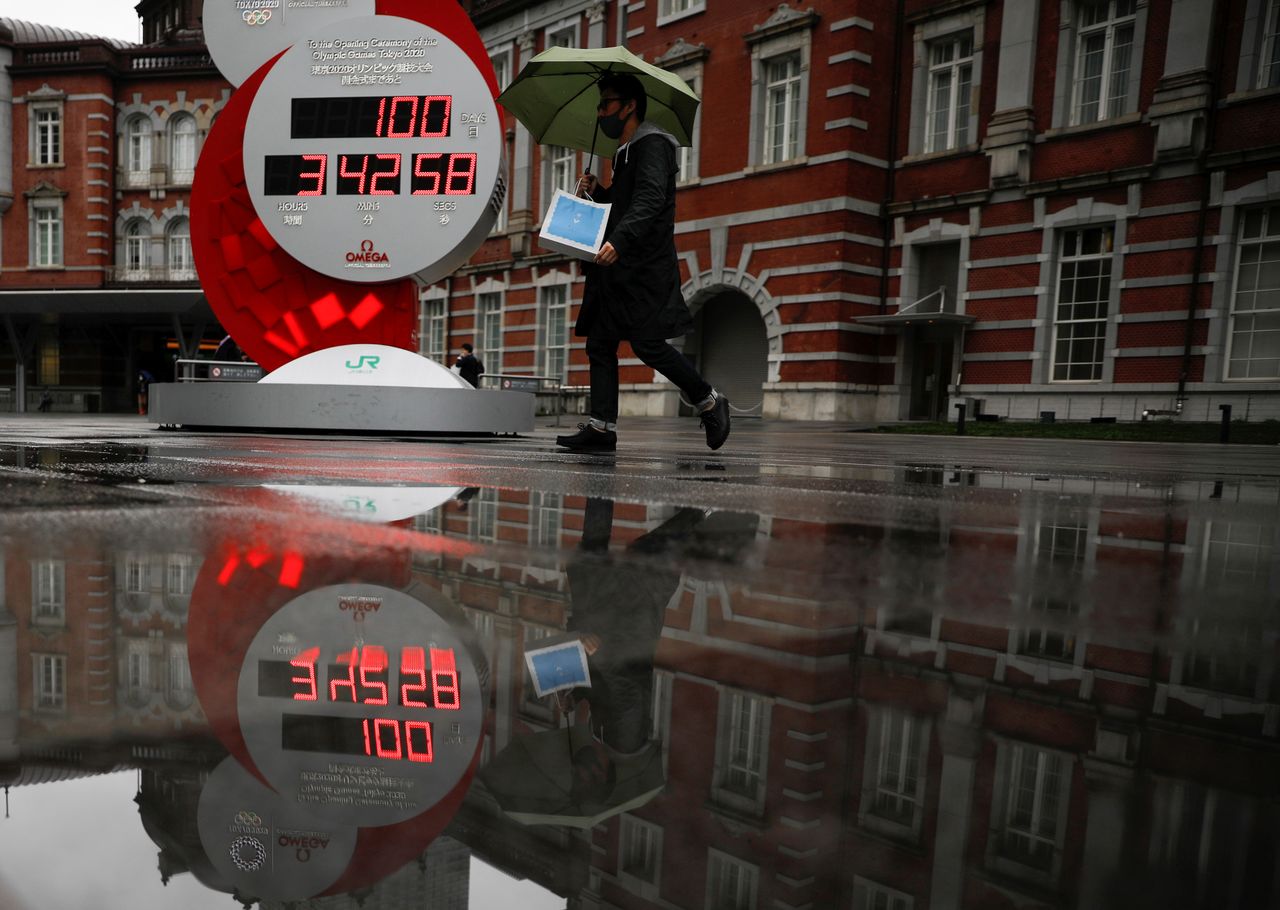 FILE PHOTO: A countdown clock showing that 100 days are left until Tokyo 2020 Olympic Games that have been postponed to 2021 due to the coronavirus disease (COVID-19) pandemic is reflected in a puddle in Tokyo, Japan April 14, 2021. REUTERS/Issei Kato

TOKYO (Reuters) - Tokyo's Olympics chief said on Friday that Japan was committed to holding a safe Games this summer, as a surge in COVID-19 cases prompted an expansion of contagion controls and with fresh calls for the Games to again be postponed or cancelled.

The government expanded quasi-emergency measures to 10 regions as a fourth wave of infections spread, casting more doubt on whether the Olympics can be held in Tokyo in fewer than 100 days.

"We're not thinking of cancelling the Olympics," Tokyo 2020 President Seiko Hashimoto said, speaking on behalf of the organising committee.

"We will continue to do what we can to implement a thorough safety regimen that will make people feel complete safety."

The government added Aichi, Kanagawa, Saitama, and Chiba to six other prefectures already under contagion controls, including the cities of Tokyo and Osaka.

Japan's top health experts have acknowledged that the COVID-19 pandemic has entered a fourth wave.

Daily cases in Osaka reached a record 1,209 on Friday, driven by a virulent strain of the virus first identified in Britain. New infections in Tokyo were 729 on Thursday, the most since early February when most of the nation was under a state of emergency.

Almost two-thirds of Japanese said the Olympics should be cancelled or postponed, a Jiji news poll showed on Friday.

A senior ruling party official said on Thursday that cancelling this year's Olympics remains an option if the coronavirus situation becomes too dire.

A scaled-back torch relay is already underway. Olympic organisers said on Friday that on the main island of Okinawa in Japan's southernmost Okinawa prefecture they would stage the relay in restricted areas without spectators instead of on public roads.

Overseas fans have been barred from the Games and officials say that domestic fans may be kept out too.

Underscoring the difficulties of planning during the pandemic, Tokyo Olympic organisers postponed another test event, the BMX freestyle cycling scheduled for April 24-25, because of the impact on scheduling from the COVID-19 situation.

Olympic and government officials have said further postponement of the Games is out of the question.

But a groundswell of health experts have said it's too risky to hold the Games this summer. Compounding the problem is Japan's relatively slow inoculation push, which began February using imported vaccines.

Japan has exhibited "poor performance" in containing virus transmission, along with limited testing capacity and a slow vaccination rollout, according to a commentary of health experts published in the British Medical Journal on Wednesday.

"Plans to hold the Olympic and Paralympic games this summer must be reconsidered as a matter of urgency," wrote lead author Kazuki Shimizu of the London School of Economics.

A survey of more than 1,000 Japanese doctors last month showed that 75% believed it was better to postpone the Games, according to physician referral company Ishinotomo.

Kyoto University professor Hiroshi Nishiura, an advisor to the government's pandemic response, urged in a magazine commentary this week that authorities postpone the Olympics one year to allow for more time to vaccinate the public.

Japan began its inoculation push in February, later than most major economies. Only 0.9% of the Japanese public have received their first shot so far, compared with 2.5% in South Korea, and 48% in the United Kingdom.

Japan's government denied reports last week that it would prioritise athletes for vaccination. Australia is one nation considering such a move.

Japanese Prime Minister Yoshihide Suga said on Thursday the government would do "everything possible" to prevent further contagion ahead of the Games.

Suga, currently on a state visit to the United States, will have a call with Pfizer Inc CEO Albert Bourla on Saturday, Japan's vaccine chief Taro Kono told reporters. Kono would not comment on the subject of the call, but local media reported that Suga would request more vaccines.