The talks offered the Democratic president, inaugurated in January, a chance to work further on his pledge to revitalize U.S. alliances that frayed under his Republican predecessor Donald Trump.

China topped the agenda, underscoring Japan's central role in U.S. efforts to face down Beijing. The two leaders addressed an array of geopolitical issues in a joint statement, including "the importance of peace and stability of the Taiwan Strait," a slap at Beijing's increased military pressure on the Chinese-claimed, self-ruled island.

"Today Prime Minister Suga and I affirmed our ironclad support for the U.S.-Japanese alliance and for our shared security," Biden told a joint news conference in the White House Rose Garden, calling the discussions "productive."

"We committed to working together to take on the challenges from China and on issues like the East China Sea, the South China Sea, as well as North Korea, to ensure a future of a free and open Indo Pacific."

Other pressing concerns at the talks included China's increased military movements near Taiwan, its tightening grip on Hong Kong and its crackdown on Muslim Uighurs in Xinjiang.

Suga said he and Biden agreed on the necessity of frank discussions with China in the context of Beijing's activities in the Indo-Pacific region.

In a strongly worded statement on Saturday, China's embassy in Washington said Beijing was "resolutely opposed" to the joint statement, and that Taiwan, Hong Kong and Xinjiang were China's internal affairs.

The remarks have "completely gone beyond the scope of the normal development of bilateral relations", harming the interests of third parties as well as peace and stability in the Asia-Pacific, the embassy said.

The move was an attempt to split the region that "will inevitably proceed with the purpose of harming others and end in harming themselves", it added.

The summit - Biden's first in-person meeting with a foreign leader as president - came just days after China sent 25 aircraft, including fighters and nuclear-capable bombers, near Taiwan, which Beijing considers a wayward province.

"I refrain from mentioning details, since it pertains to diplomatic exchanges, but there is already an agreed recognition over the importance of peace and stability of the Taiwan Strait between Japan and the United States, which was reaffirmed on this occasion," Suga said.

The joint leaders' statement included the first reference to Taiwan since 1969, before Tokyo normalized ties with Beijing, using similar phrasing by the foreign and defense ministers of both countries after a meeting last month.

Attention had been focused on the wording on Taiwan and other sensitive issues, given caution in Tokyo about the need to balance its security concerns with Japan's deep economic ties with China.

Taiwan’s government welcomed the show of support, and called on China to act responsibly.

"We hope the Beijing authorities will fulfill their responsibilities as part of the Taiwan Strait and region and jointly make positive contributions to stability and well being,” presidential office spokesman Xavier Chang said in a statement.

In another swipe at China, Biden told the news conference the United States and Japan will invest together in areas such as 5G, artificial intelligence, quantum computing, genomics and semiconductor supply chains.

The joint statement said the United States had committed $2.5 billion and Japan $2 billion to strengthen digital competitiveness including in 5G and beyond 5G networks.

"Japan and the United States are both deeply invested in innovation and looking to the future," Biden said. "That includes making sure we invest in and protect technologies that will maintain and sharpen our competitive edge."

Speaking later to a Washington think tank, Suga said Japan would say what is needed to be said to China and speak up on human rights, while also stressing the need to establish a stable, constructive relationship with Beijing.

The leaders' statement said they "share serious concerns" about the human rights situation in Hong Kong and China's Xinjiang region, where Washington has said Beijing is perpetrating a genocide against Muslim Uighurs. China has denied abuses.

Japan has been criticized for not taking stronger action on alleged human rights abuses for fear of a backlash that could hurt its firms with business in China, its biggest trade partner.

At the White House news conference, Suga said he told Biden that he was committed to moving forward with the summer Olympic Games in Japan and that Biden offered his support. Japan is grappling with rising coronavirus infections with fewer than 100 days until the planned start.

"I told the president about my determination to realize the Tokyo Olympic and Paralympic games this summer as a symbol of global unity," Suga said.

As they sat down for talks, Biden, Suga and their two delegations all wore masks, in keeping with protocols to protect against the spread of COVID-19.

Biden appeared determined to get off on the right foot with Suga after four years in which Trump sometimes chastised allies in Asia and elsewhere over what he saw as insufficient defense spending or funding for U.S. troop presence and questioned the value of bedrock military alliances.

With the Suga meeting and another planned summit with South Korea in May, Biden hopes to energize joint efforts with Australia, India and Japan in a grouping known as the Quad, as well as with South Korea, to counter China and longtime U.S. foe North Korea. 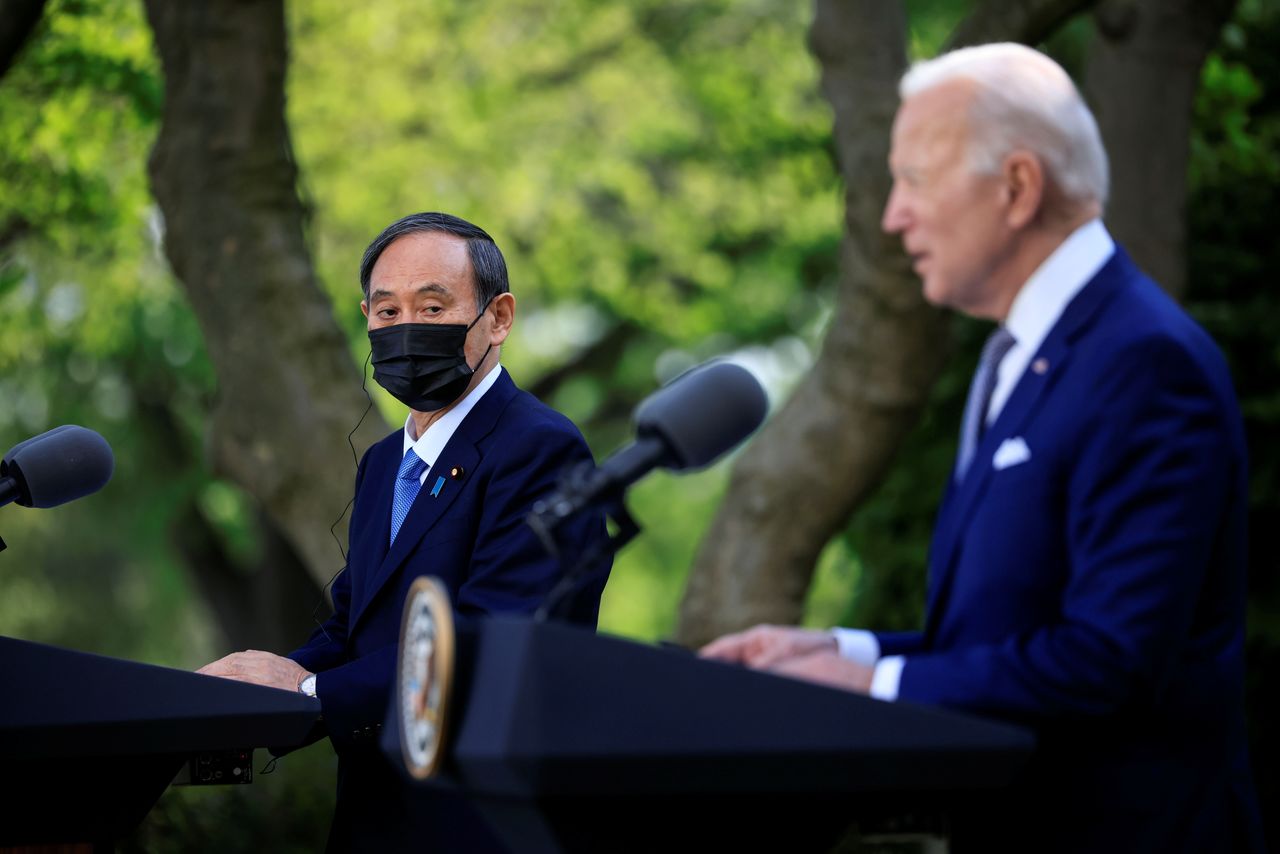 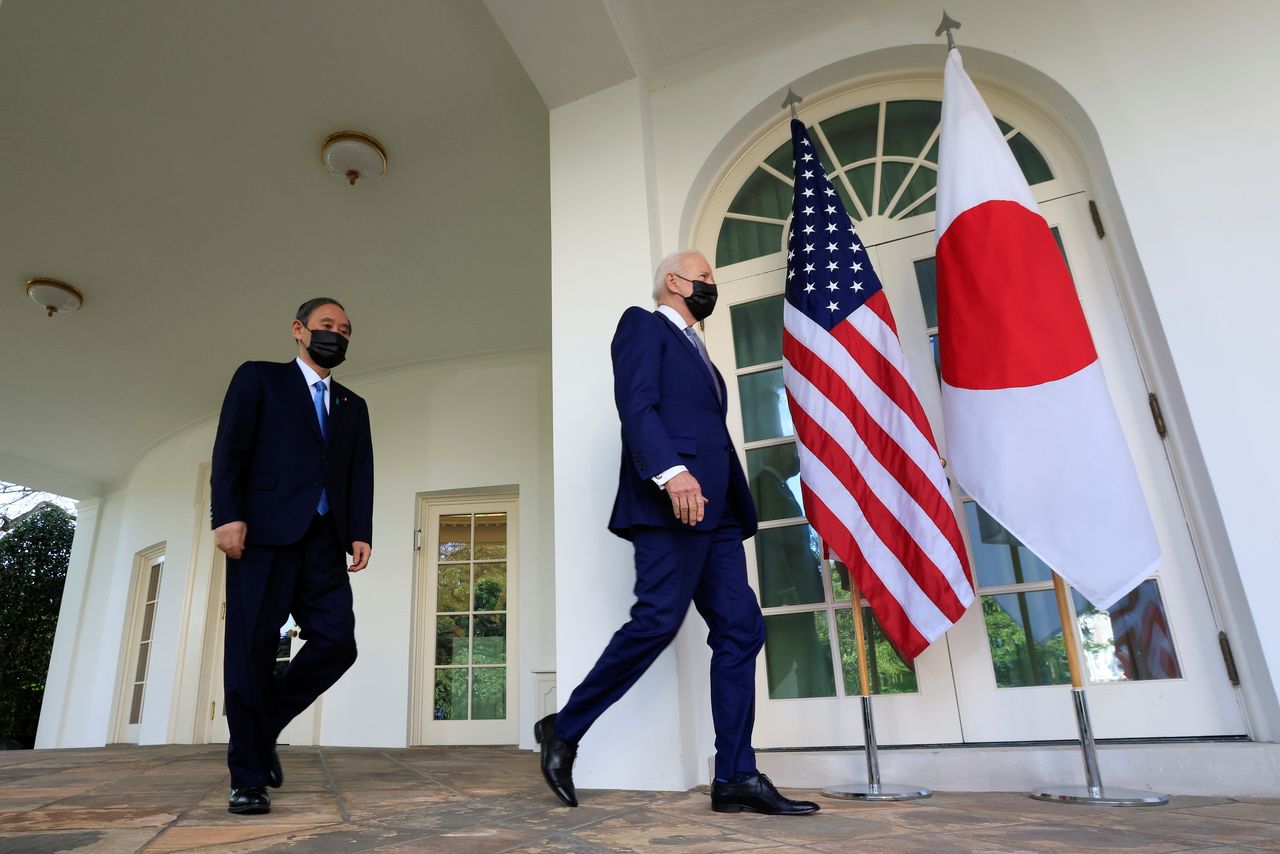 U.S. President Joe Biden walks out of the Oval Office with Japan's Prime Minister Yoshihide Suga ahead of a news conference at the White House in Washington, U.S., April 16, 2021. REUTERS/Tom Brenner 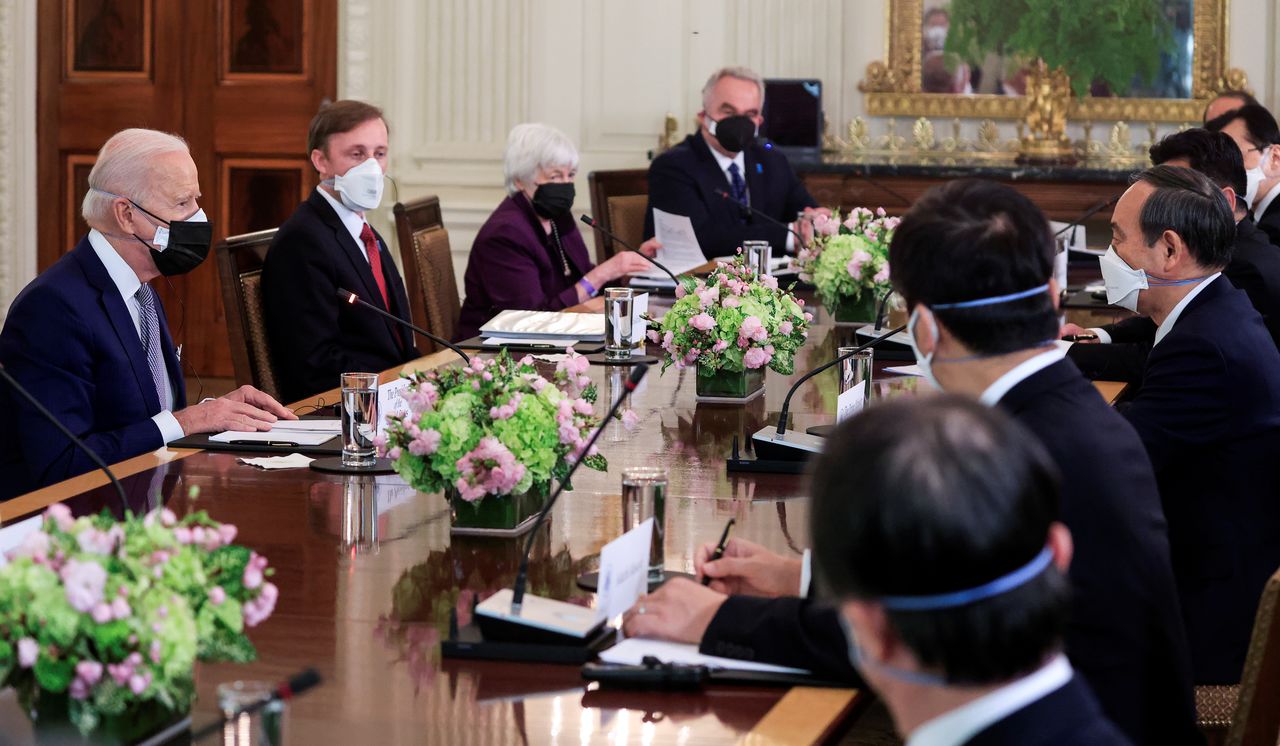 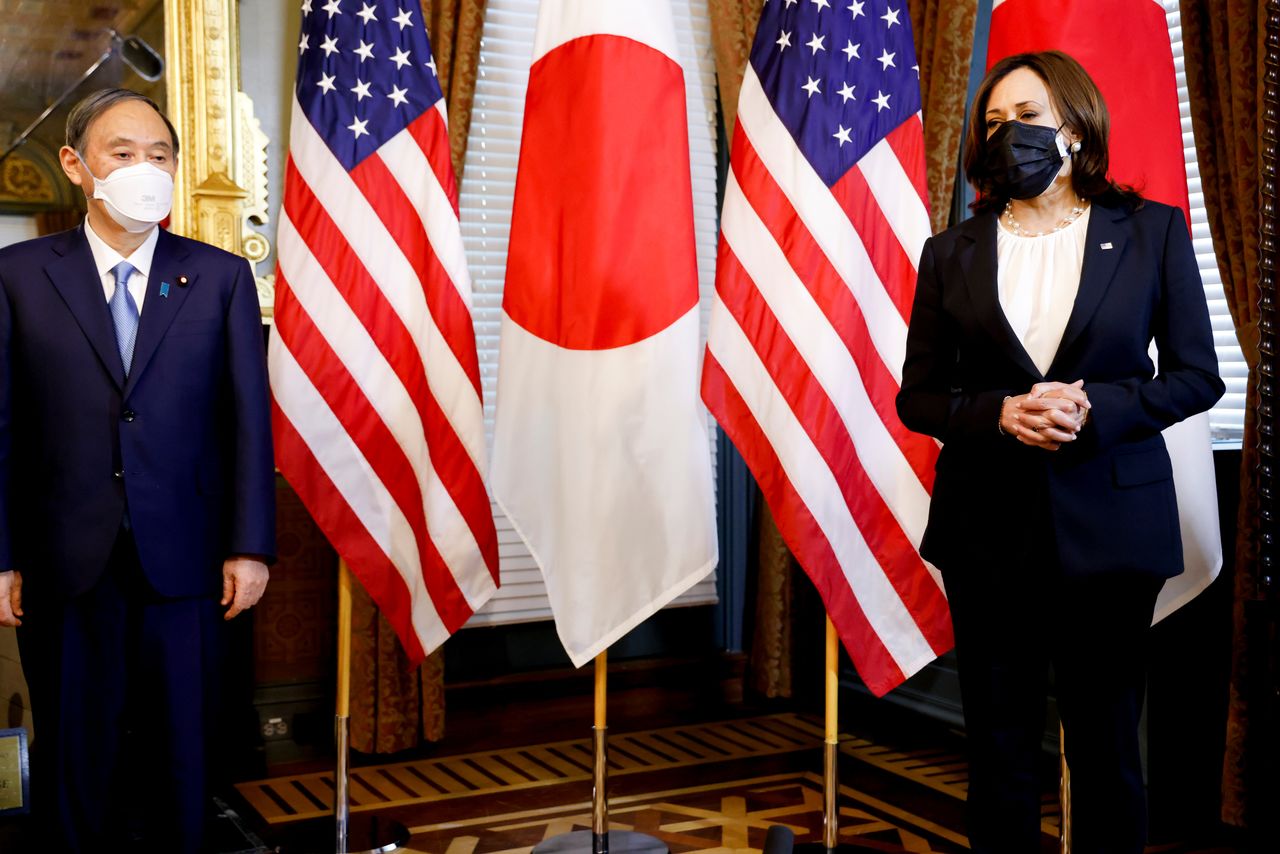 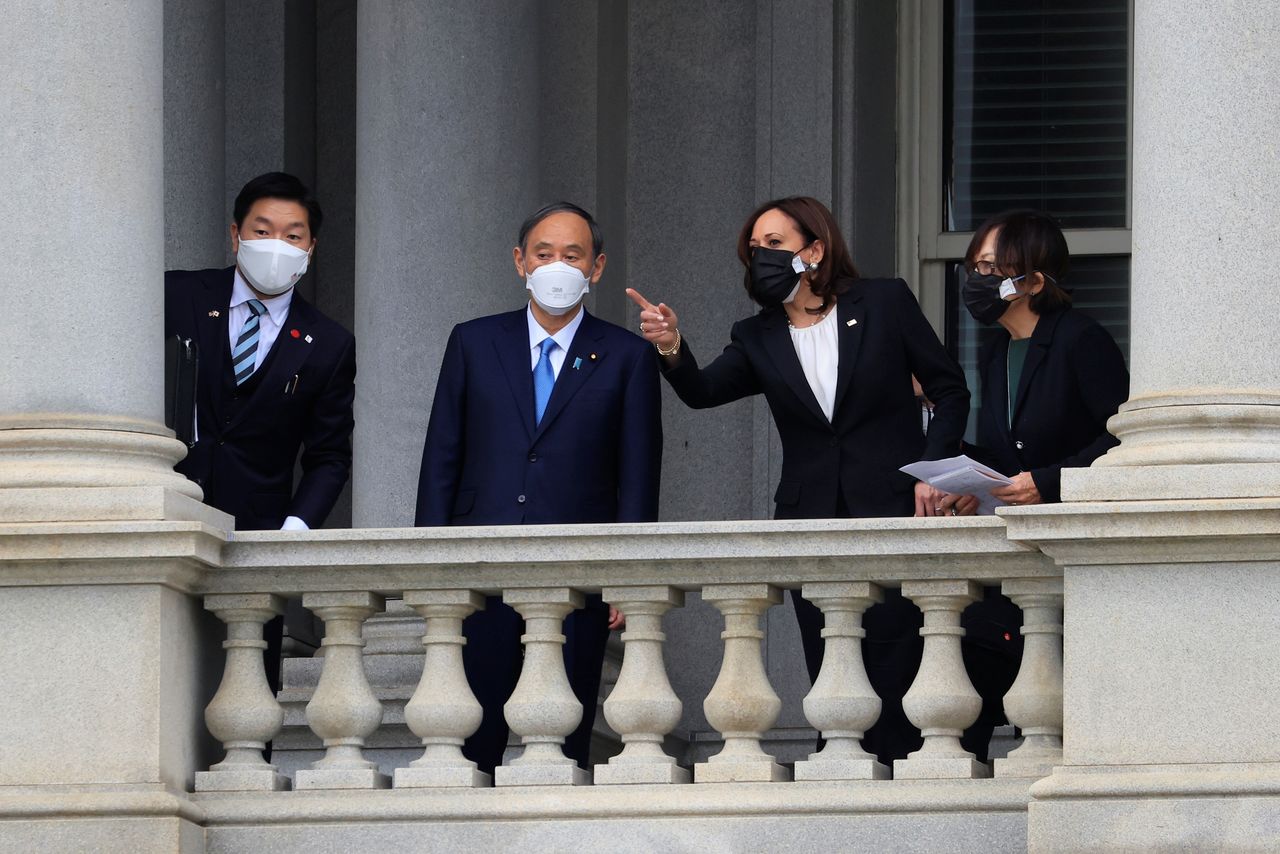