By Arshad Mohammed and Will Dunham

ST. PAUL, Minn. (Reuters) -Walter Mondale, a leading liberal Democratic voice of the late 20th century who was U.S. vice president under Jimmy Carter and lost in a landslide to Ronald Reagan in the 1984 presidential election, died on Monday at age 93, his family said.

"Well my time has come. I am eager to rejoin Joan and Eleanor," Mondale said in a statement to his staff and released to the public after his death, referring to his late wife Joan, who died in 2014, and daughter Eleanor, who died in 2011 at age 51. "Before I go I wanted to let you know how much you mean to me."

Mondale, the first major U.S. party presidential nominee to pick a woman running mate, believed in an activist government and worked for civil rights, school integration, consumer protection and farm and labor interests as a U.S. senator and vice president during Carter's troubled one-term presidency from 1977 to 1981.

"It's with great sadness that Jill and I learned of the passing of Vice President Walter Mondale, but great gratitude that we were able to call one of our nation’s most dedicated patriots and public servants a dear friend and mentor," President Biden and First Lady Jill Biden said in a statement.

"Walter Mondale was the first presidential nominee of either party to select a woman as his running mate, and I know how pleased he was to be able to see Kamala Harris become Vice President," Biden's statement added.

"Today I mourn the passing of my dear friend Walter Mondale, who I consider the best vice president in our country's history," Carter, 96, said in a statement that also praised Mondale's political skill and integrity."

"He was an invaluable partner and an able servant of the people of Minnesota, the United States, and the world."

Widely known as "Fritz," Mondale was the Democratic nominee in 1984 against Reagan, a popular incumbent Republican who had beaten Carter four years earlier, and selected New York Democratic U.S. congresswoman Geraldine Ferraro as his vice presidential running mate. Ferraro died in 2011 at age 75.

Despite the historic selection of a woman, Mondale suffered one of the worst defeats ever in a U.S. presidential election, losing in 49 of the 50 states and carrying only his native Minnesota as well as Washington, D.C.

It was the first of two times that Mondale was sent into political retirement by a crushing defeat.

Eighteen years later, grieving Minnesota Democrats beseeched Mondale, then 74, to run for the Senate after Senator Paul Wellstone died in a plane crash 11 days before the 2002 election. Mondale lost narrowly to Republican Norm Coleman, who depicted him as the graying representative of a bygone era.

During his race against Reagan, Mondale promised Americans he would raise their taxes, a vow that did little to help his candidacy.

"I mean business. By the end of my first term, I will reduce the Reagan budget deficit by two-thirds," Mondale said during his speech in San Francisco accepting the 1984 Democratic presidential nomination. "Let's tell the truth. It must be done, it must be done. Mr. Reagan will raise taxes, and so will I. He won't tell you. I just did."

The remark helped sink his campaign. Even years later, he expressed no regrets. "I'm really glad I did it," he told PBS in 2004. "It's something that I felt good about, and I thought I told the truth."

Earlier that year, Mondale made a memorable political quip when, during a primary debate, he tried to depict Gary Hart, a rival for his party's presidential nomination, as all style and no substance by asking: "Where's the beef?"

The line, borrowed from a humorous hamburger commercial popular at the time, hurt Hart's campaign.

Mondale was a protege of fellow Minnesota liberal Hubert Humphrey, also a senator and vice president, who lost the 1968 presidential election to Republican Richard Nixon.

Mondale served in the Senate from 1964 until he was elected as vice president in Carter's 1976 victory over incumbent Republican Gerald Ford, who had become president after Nixon resigned in 1974 due to the Watergate corruption scandal.

Mondale became a more engaged vice president than many who preceded him. He played a key role in buttressing the sometimes frayed relationship between Carter's White House and the Democratic-controlled Congress.

He did not always agree with Carter, as when he privately opposed Carter's preachy 1979 speech in which the president told Americans, besieged by a bad economy, that they were suffering from a "crisis of confidence." Mondale even considered resigning over the speech.

Carter increasingly looked like a weak president as he struggled with a hostage crisis in Iran, a Soviet invasion of Afghanistan and tough economic times at home.

The Carter-Mondale ticket lost in 1980 against Reagan and his running mate, George H.W. Bush. Mondale, still associated in voters' minds with Carter, faced the daunting task of trying to defeat a popular incumbent amid economic prosperity in 1984.

The contest between Mondale and Reagan presented Americans with a clear choice between liberal and conservative candidates and doctrines.

Mondale was seen as the victor in their first debate, with the older Reagan coming across to some as out of touch and uncertain.

Reagan rebounded in the second debate. He allayed concerns about his age with his response to a question as to whether, at age 73, he was too old to be seeking four more years as president.

"I will not make age an issue of this campaign. I am not going to exploit, for political purposes, my opponent's youth and inexperience," Reagan joked, provoking laughter in the audience at the debate, and even from Mondale.

"I think the public wanted to vote for Reagan," Mondale said later. He said that after the second debate, "I was almost certain the campaign was over. And it was."

Mondale's loss and a similar thrashing of fellow liberal Michael Dukakis in 1988 opened the way for more centrist Democrats like Bill Clinton to assert themselves in the party.

Born in Ceylon, Minnesota, on Jan. 5, 1928, Walter Frederick Mondale was the sixth of seven children. His father was a Methodist minister, his mother a music teacher.

Minnesota was dominated by farming and mining, and it had a tradition of liberal, populist politics, with many Scandinavian-American residents like the Norwegian Mondales.

After serving in the U.S. Army, he earned a law degree at the University of Minnesota. His political life started with his work on the re-election campaign of Humphrey, then mayor of Minneapolis.

When Humphrey became vice president in 1964, Mondale succeeded him in the Senate, coming to Washington during Democratic President Lyndon Johnson's "Great Society," a time of great hope and excitement for liberals, though their optimism was crushed by the Vietnam War.

Mondale married wife Joan in 1955. She died in 2014. They had three children, Eleanor and sons Theodore and William.

Plans for memorials will be announced later for both Minnesota and Washington D.C., Mondale family said. 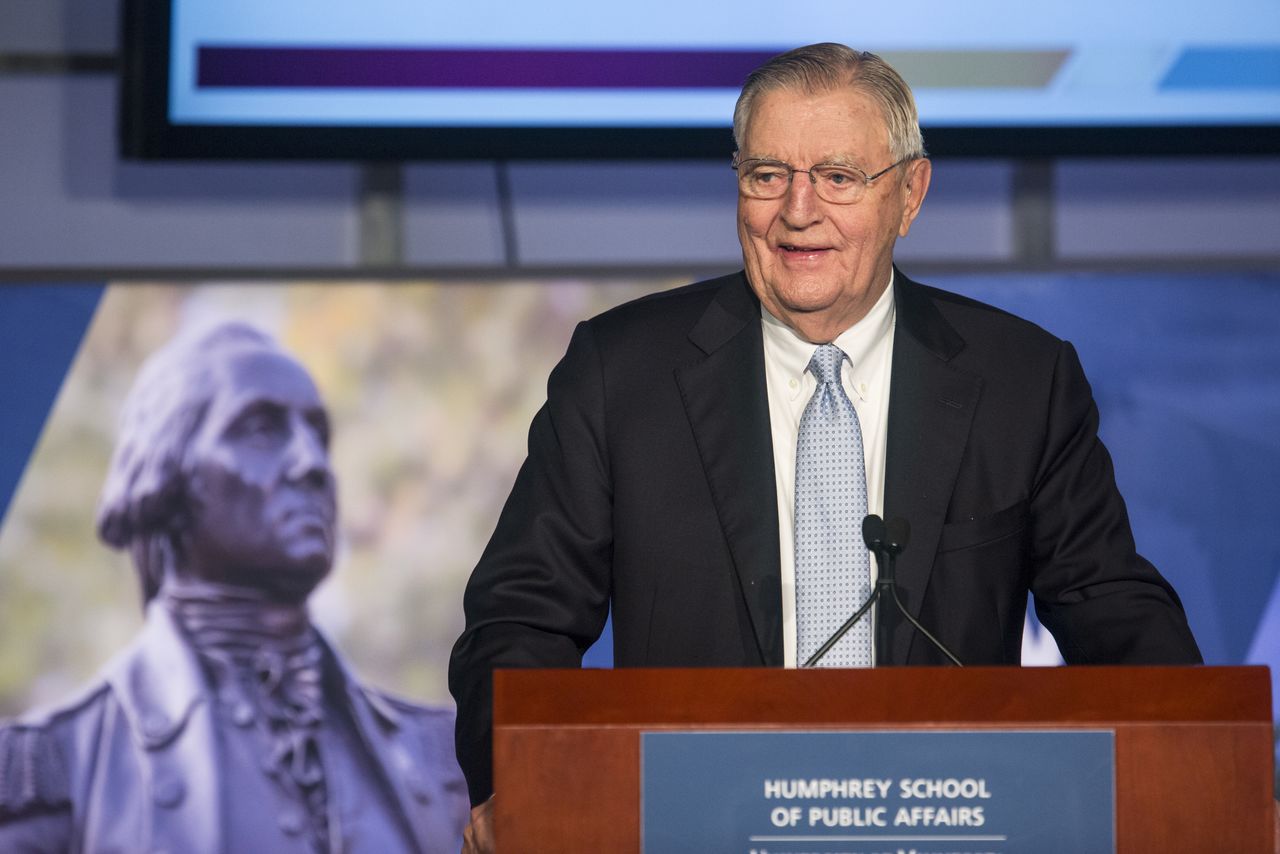 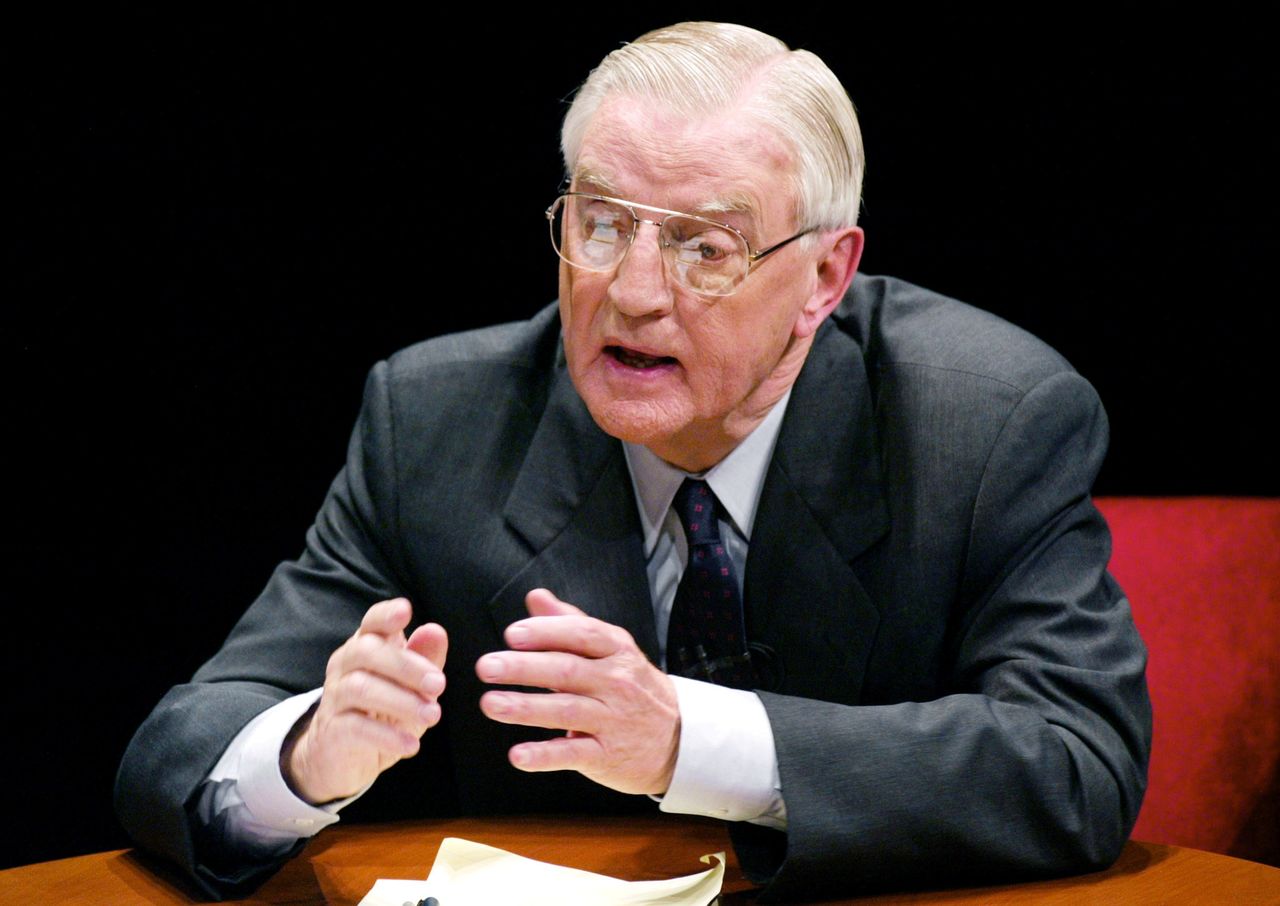 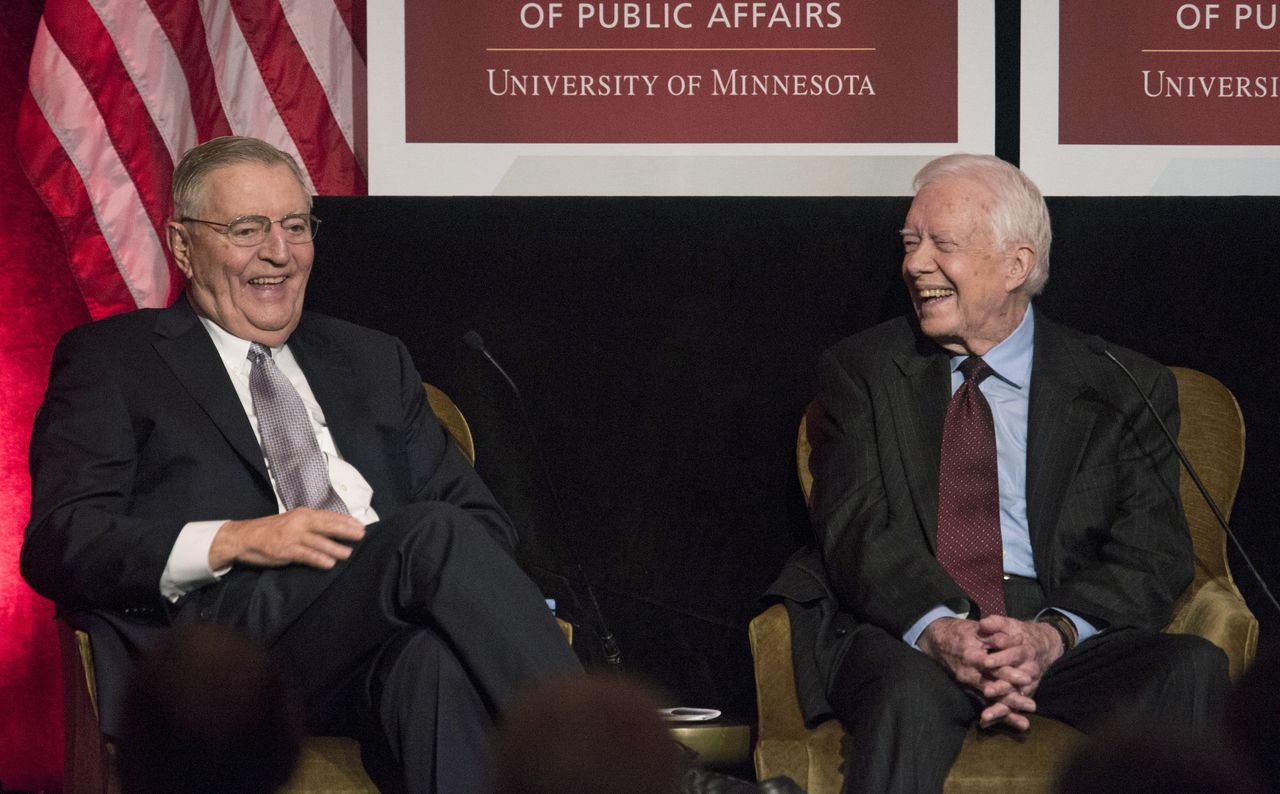 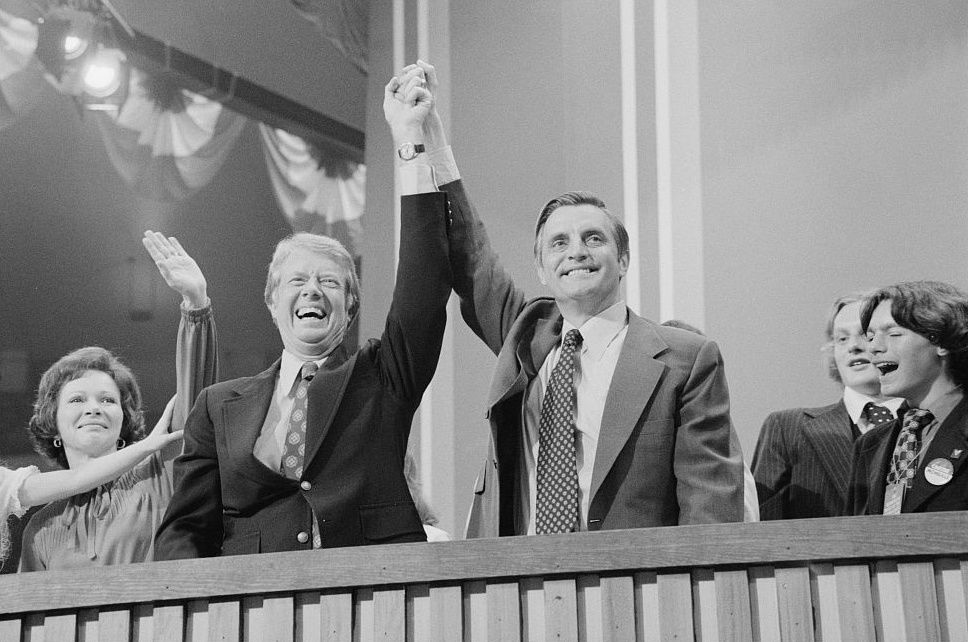 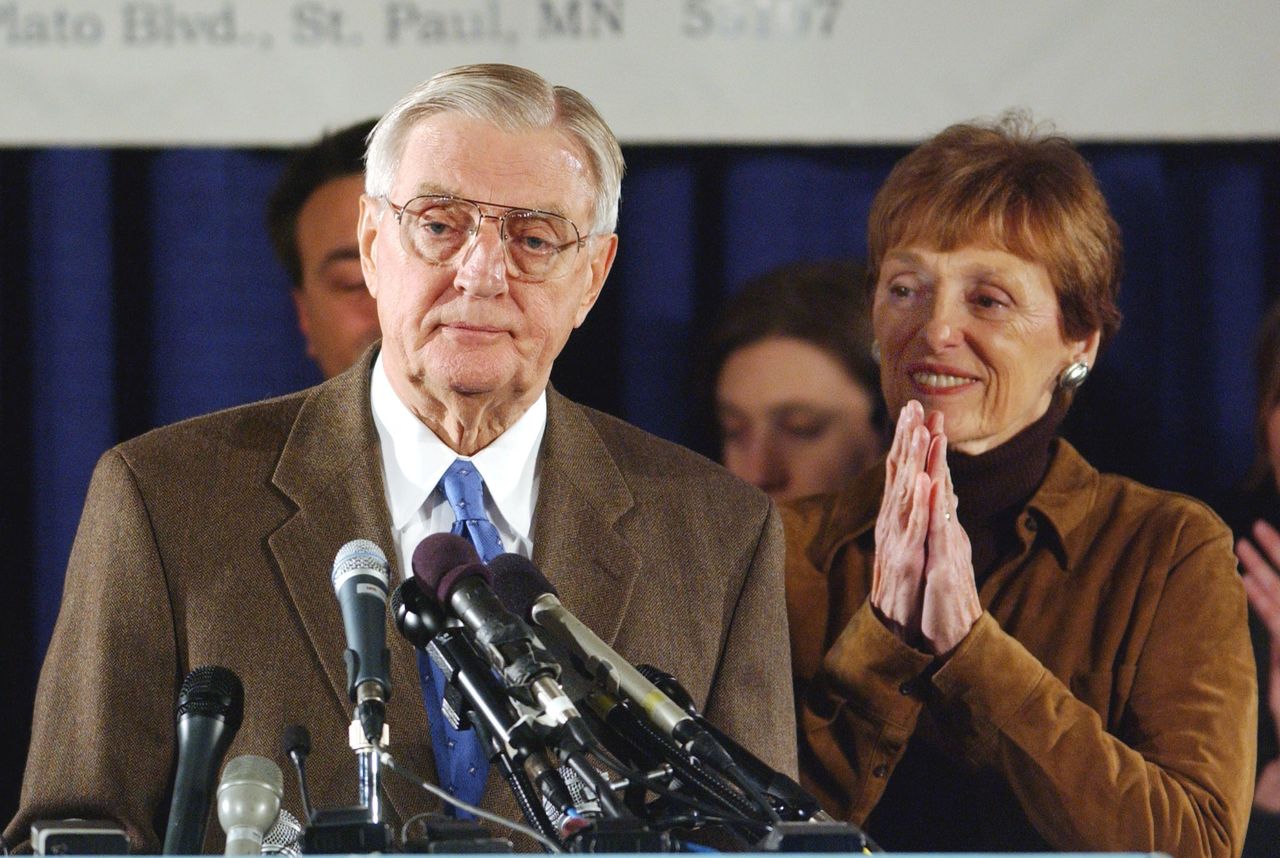