After a storm of protests from fans, players, managers and governments, alongside threats of bans and sanctions from the game's European and world governing bodies UEFA and FIFA, the English clubs capitulated under pressure and threw in the towel.

Manchester City were the first to back out of the venture and then Arsenal, Manchester United, Liverpool and Tottenham Hotspur and Chelsea announced they were following suit.

The Super League issued a statement which suggested they may be suspending their project but stopped short of abandoning it altogether.

"Given the current circumstances, we shall reconsider the most appropriate steps to reshape the project, always having in mind our goals of offering fans the best experience possible while enhancing solidarity payments for the entire football community," the statement said.

The Madrid-based organisation said the departure of the English teams was due to "pressure" placed on them and said they were "convinced that the current status quo of European football needs to change".

The league, which was announced on Sunday with 12 founding members, has been championed by Real Madrid president Florentino Perez, the new competition's chairman. It is now left with three Italian clubs -- AC Milan, Juventus and Inter Milan -- plus Perez's Real Madrid along with Barcelona and Atletico Madrid from Spain.

Inter Milan look likely to be the next to leave with the Italian news agency ANSA quoting a club source as saying "The Super League project in its current state is no longer considered of interest by Inter".

UEFA, whose elite Champions League competition was at risk from the proposed new league, threatened to ban the clubs and players who joined the Super League but its president Aleksander Ceferin had earlier urged the English clubs to think again.

“I said yesterday that it is admirable to admit a mistake and these clubs made a big mistake," he said after the English clubs announced their decisions to leave.

“But they are back in the fold now and I know they have a lot to offer not just to our competitions but to the whole of the European game.

“The important thing now is that we move on, rebuild the unity that the game enjoyed before this and move forward together," he said.

Adding to the drama, Manchester United executive vice-chairman Ed Woodward fell on his sword, announcing his resignation shortly before his club gave up on a project he had been influential in bringing about.

The Super League had argued that it would increase revenues to the top clubs and allow them to distribute more money to the rest of the game.

U.S. investment bank JP Morgan was brought in to finance the new league, providing a 3.5 billion euro ($4.21 billion) grant to the founding clubs to spend on infrastructure and recovery from the impact of the COVID-19 pandemic.

However, the sport’s governing bodies, other teams and fan organisations said the Super League would boost the power and wealth of the elite clubs and the partially closed structure of the league goes against European football's long-standing model.

Unlike Europe’s current top-level Champions League competition, where teams have to qualify through their domestic league, the founding Super League teams would have guaranteed themselves a place in the new competition every year.

Most of the English clubs made only brief statements but Arsenal apologised to their fans for being involved.

"It was never our intention to cause such distress, however when the invitation to join the Super League came, while knowing there were no guarantees, we did not want to be left behind to ensure we protected Arsenal and its future.

"As a result of listening to you and the wider football community over recent days we are withdrawing from the proposed Super League. We made a mistake, and we apologise for it," the London club said in an open letter https://www.arsenal.com/news/open-letter-our-fans to fans.

The magnitude of the split in the game and the strength of feeling it generated led political leaders across Europe to speak out, and, in some cases, to threaten intervention.

British Prime Minister Boris Johnson said his government would consider passing legislation to stop the breakaway, likening the plans to creating a cartel.

The Premier League said it "unanimously and vigorously" rejected the plans. After a meeting with the 14 clubs not involved, it said it was considering "all actions available" to stop the new competition.

"We have listened carefully to the reaction from our fans, the UK government and other key stakeholders," Manchester United said in a statement.

"We remain committed to working with others across the football community to come up with sustainable solutions to the long-term challenges facing the game." 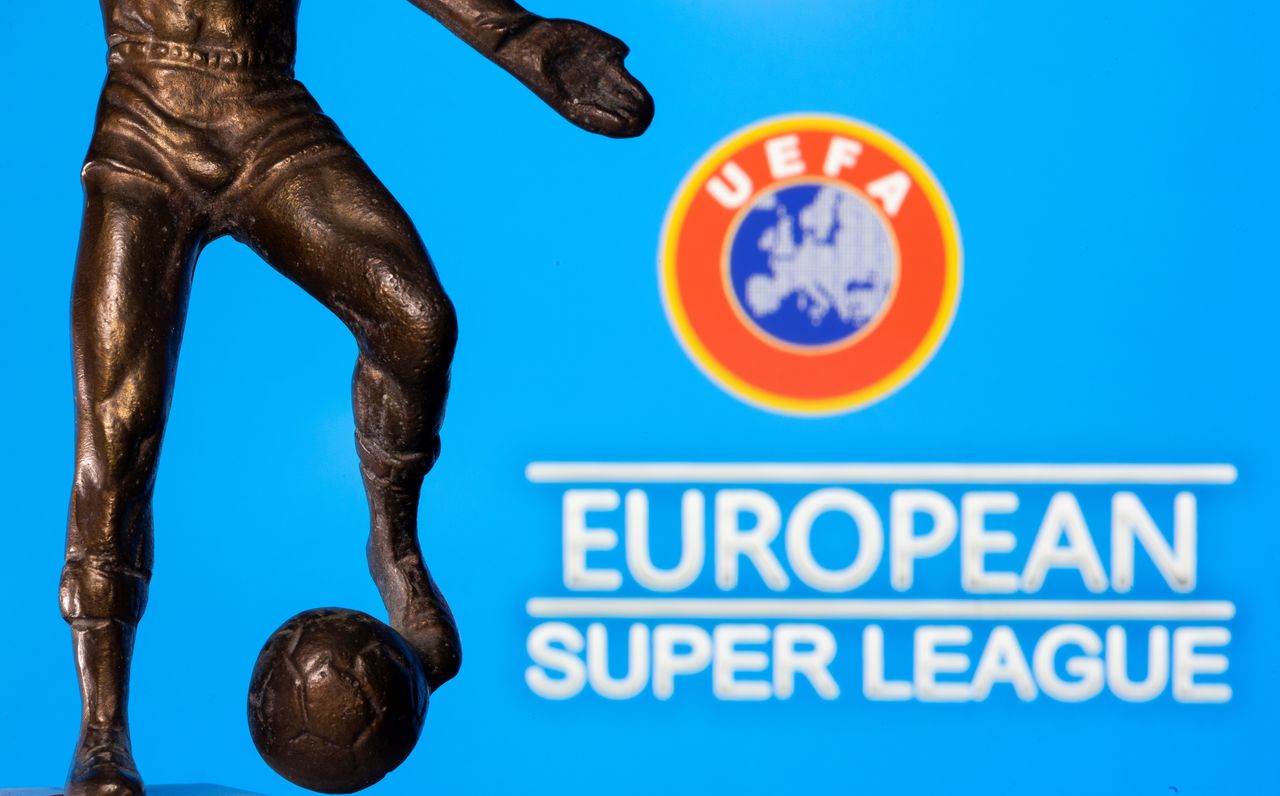 A metal figure of a football player with a ball is seen in front of the words "European Super League" and the UEFA logo in this illustration taken April 20, 2021. REUTERS/Dado Ruvic/Illustration 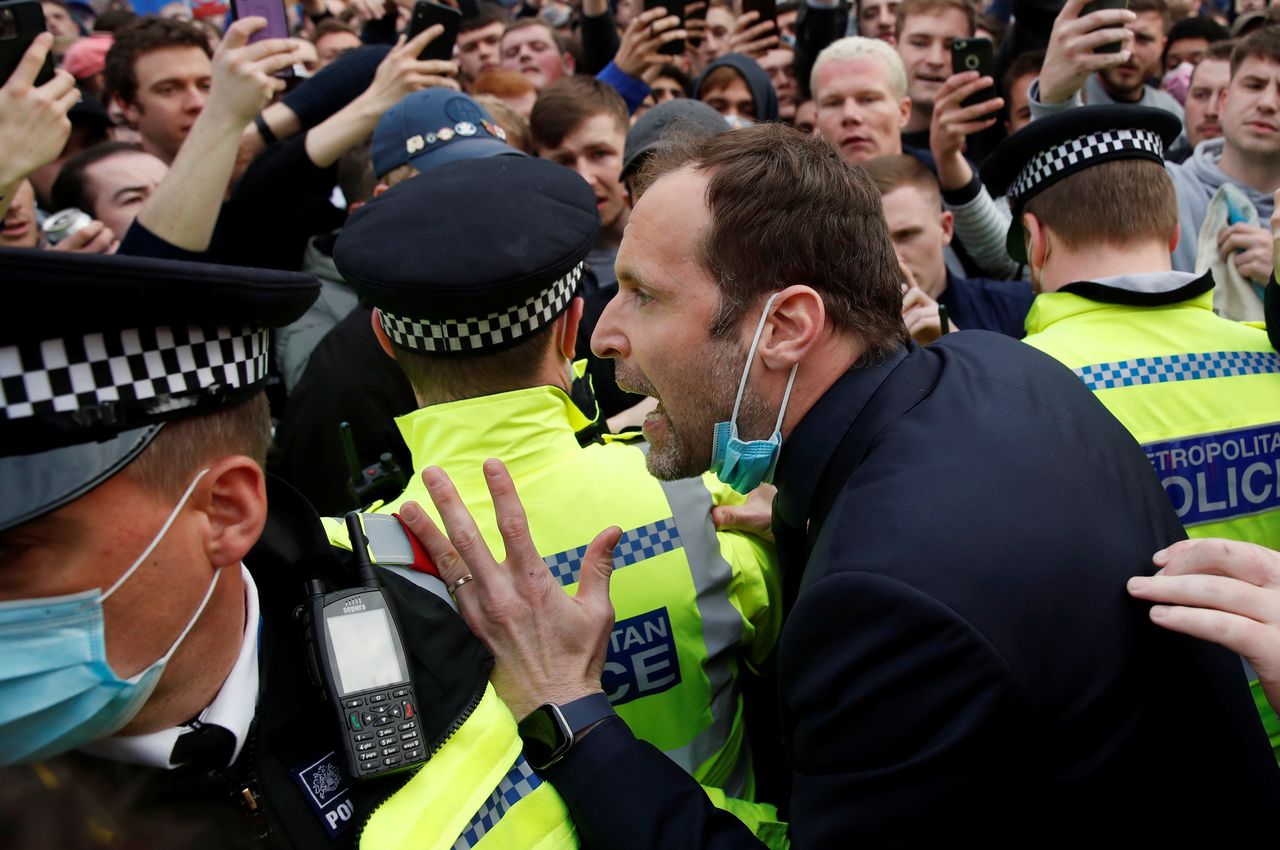 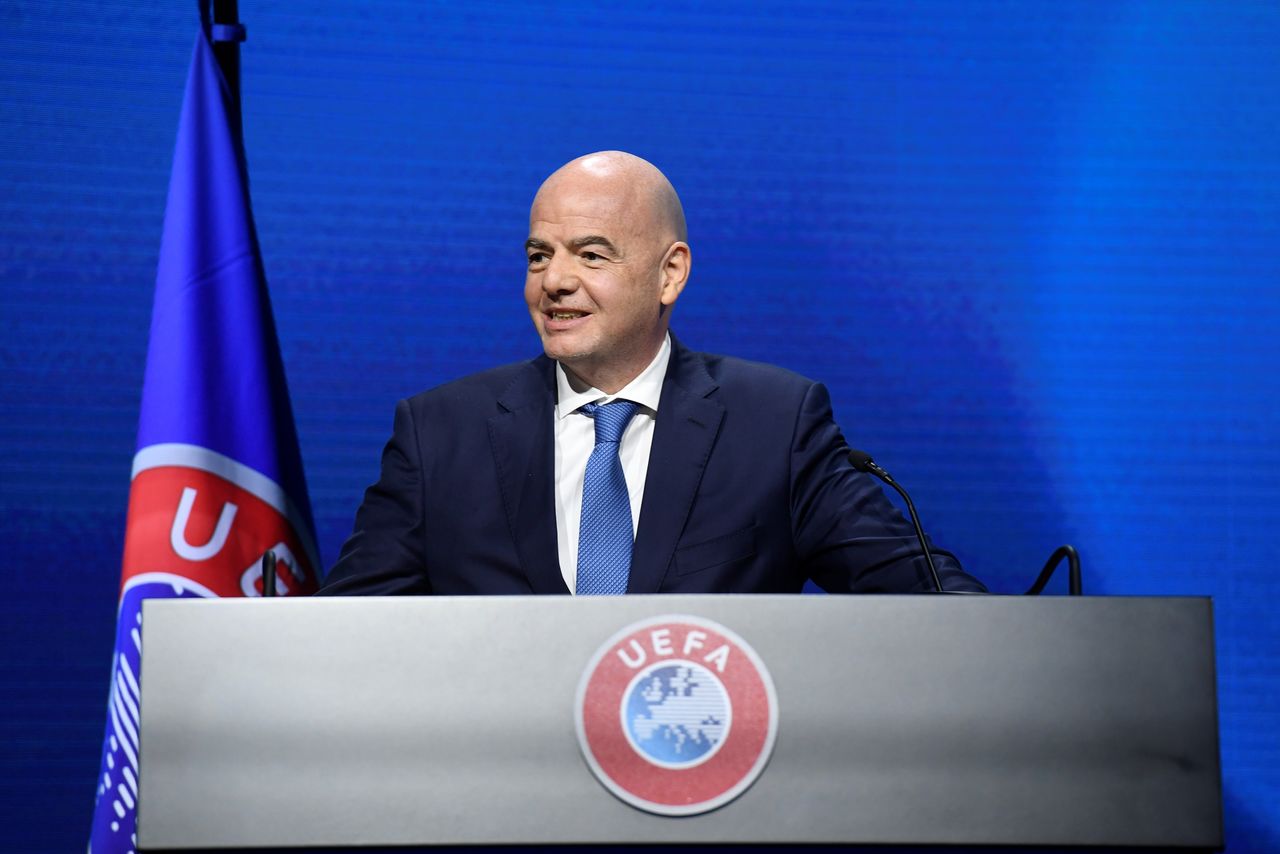 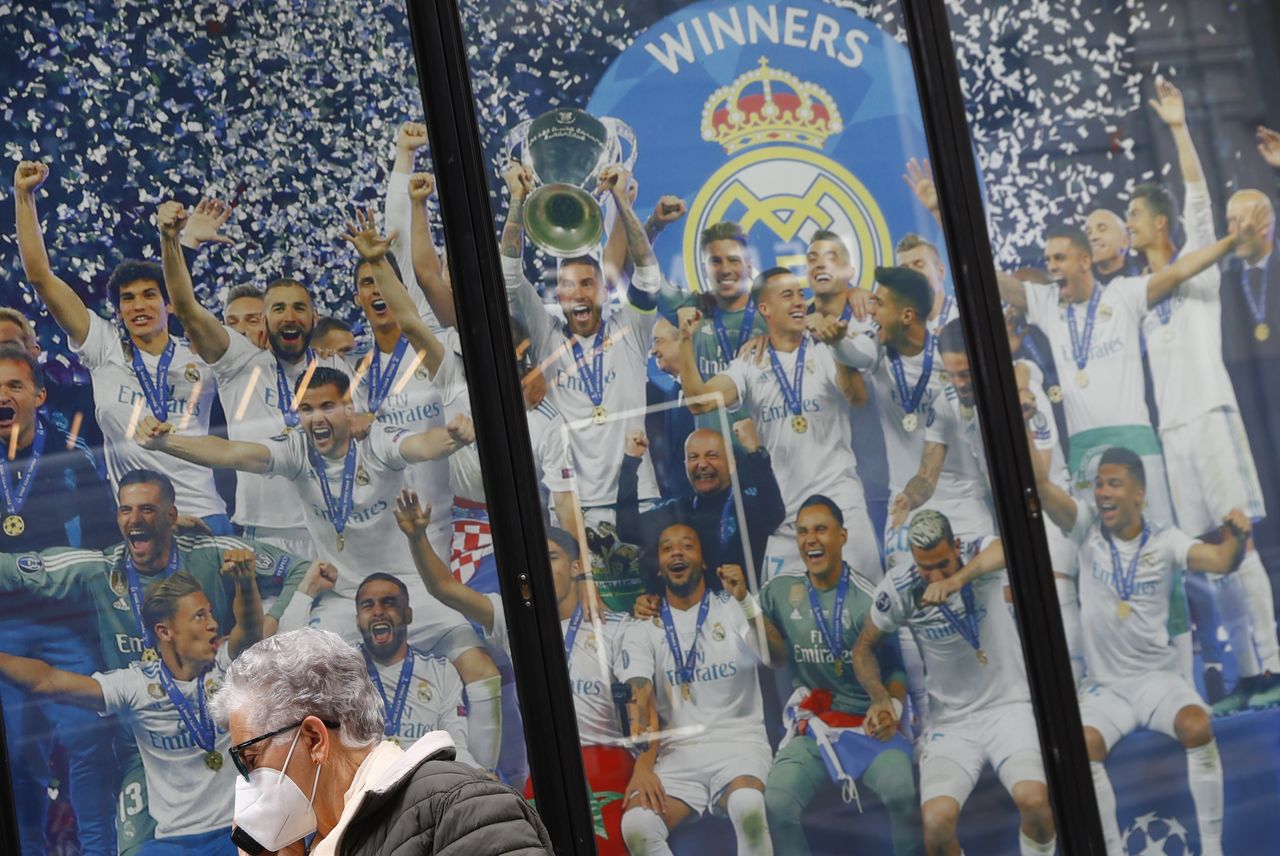 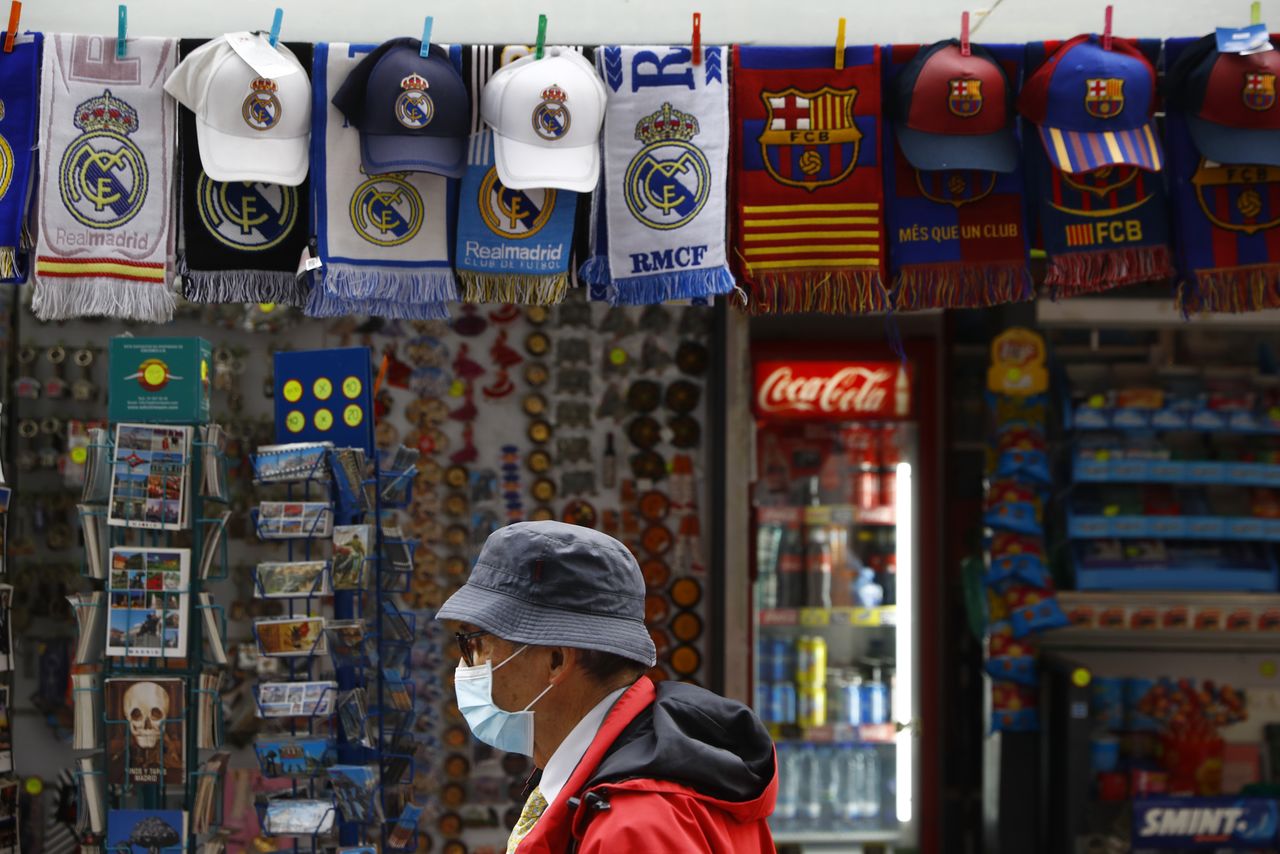