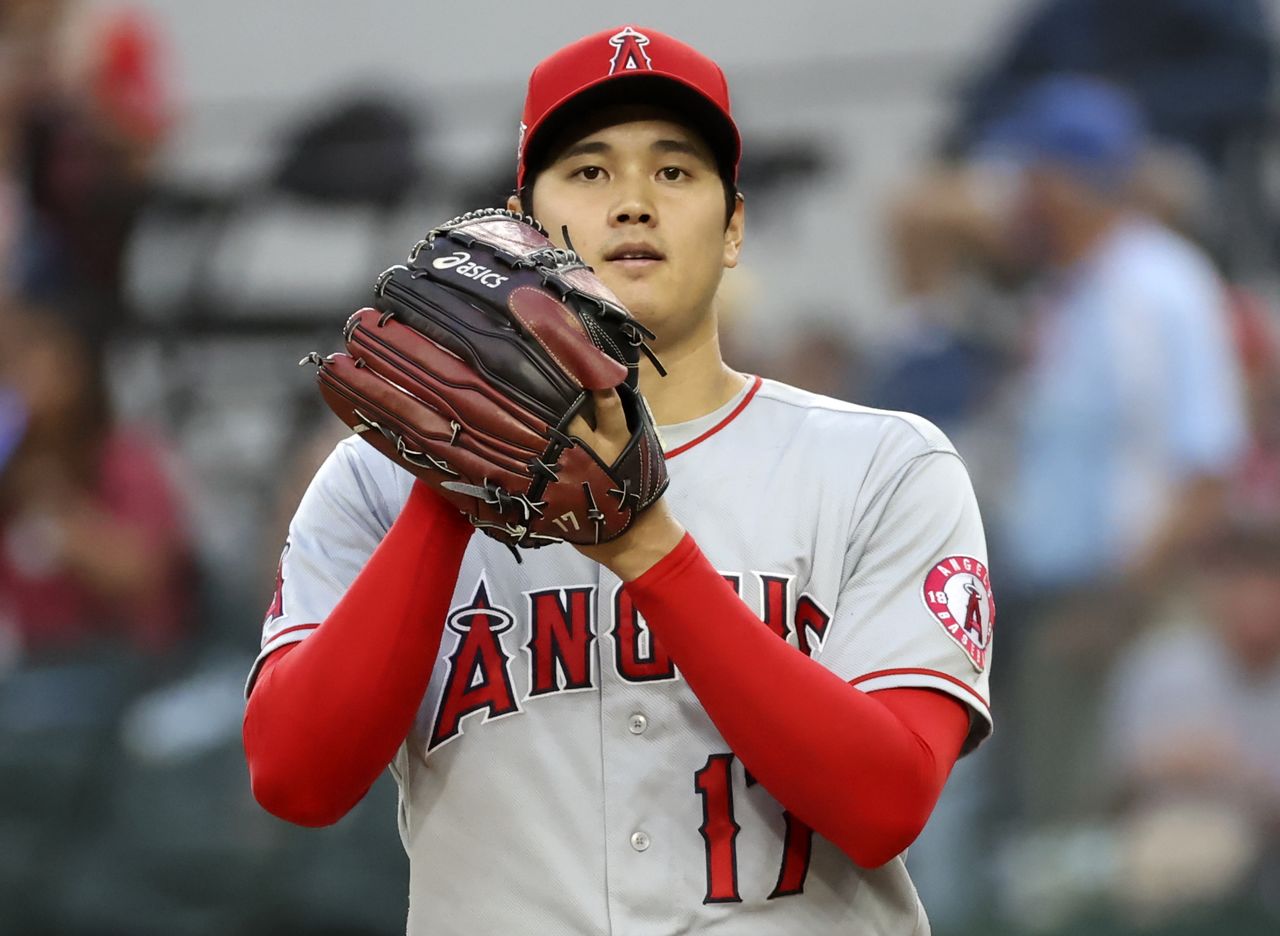 Shohei Ohtani pitched five innings, had two hits, scored three runs and led the Los Angeles Angels to a 9-4 victory over the Texas Rangers on Tuesday night in Arlington, Texas.

Ohtani entered the contest as the first home run leader (tied with seven) to be the starting pitcher in a game since New York Yankees great Babe Ruth did so against Detroit on June 13, 1921.

Mike Trout and Jared Walsh chipped in with four and three hits, respectively, and got home runs from Albert Pujols, Justin Upton and Jose Iglesias among the Angels’ season-best 16 hits.

Rangers starter Jordan Lyles (1-2) got the loss after giving up seven runs on 10 hits and three walks in just 2 2/3 innings, his shortest start of the season.

Trevor Rogers pitched six shutout innings and Corey Dickerson hit a home run while driving in three runs as Miami cruised past host Milwaukee in the opener of a three-game series.

The Marlins scored four runs in the sixth inning while chasing Brewers starter Corbin Burnes (2-2). The right-hander was pulled after Miami started the sixth with five consecutive hits. Burnes (2-2) gave up five runs (four earned) on eight hits but had nine strikeouts without walking a batter.

Jesse Winker hit a two-run home run to lead off the 10th inning, and visiting Cincinnati ended a seven-game losing streak with a victory over Los Angeles.

Reds starter Tyler Mahle pitched five strong innings in his homecoming, but the Reds were unable to hold a late two-run lead. Winker and Nick Castellanos each had two hits for the Reds, with Castellanos driving in a run as Cincinnati ended a five-game skid in road games.

Buster Posey collected four hits, including a home run, and drove in three runs as San Francisco scored early and often en route to a rout of visiting Colorado.

Mauricio Dubon had four RBIs and Evan Longoria three for San Francisco, which won for the seventh time in its last nine games. Benefitting from a four-run cushion after one inning and a 9-0 lead after two, right-hander Anthony DeSclafani (2-0) completed his second career shutout, limiting the Rockies to three hits, all singles, and a walk.

Rockies starter Austin Gomber (1-3) was charged with nine runs on seven hits in 1 2/3 innings. He walked four and struck out three.

Carlos Santana hit a two-run homer and visiting Kansas City completed a four-game sweep of Detroit with a matinee triumph.

Whit Merrifield drove in the go-ahead run for the Royals, while Brad Keller notched the victory. Keller gave up two runs on eight hits and struck out four in six innings.

Travis d’Arnaud went 2-for-4 with two RBIs for Atlanta, while Ozzie Albies and Guillermo Heredia drove in one run apiece. Braves right-hander Charlie Morton (2-1) allowed five runs on four hits in 5 1/3 innings. He walked three and struck out six.

Kris Bryant clubbed a grand slam for Chicago, which dropped its third consecutive game. Willson Contreras added a two-run home run for the Cubs. Right-hander Brandon Workman (0-2) took the loss in relief. He gave up three runs on two hits in one inning while walking one and striking out one.

In his five innings, Manaea (3-1) allowed just one run on four hits while walking two and fanning six over his 100-pitch performance. Ramon Laureano’s double and Tony Kemp’s single accounted for the other two hits by the Athletics, who won for the 14th time in their last 15 games.

Randy Arozarena went 3-for-4 with a run and a stolen base for Tampa Bay. In his best start this season, the Rays’ Rich Hill (1-1) gave up two runs and struck out 10 -- the 17th time the left-hander has recorded double-digit strikeouts.

Harvey (2-1) limited the Yankees to three hits and produced the best of his five outings with the Orioles. He struck out five, worked around three walks and threw 84 pitches in an outing that lowered his ERA from 5.12 to 4.26.

In his season debut for the Yankees, Deivi Garcia (0-1) allowed two runs on three hits in four innings. He struck out four, walked three and threw 65 pitches.

Jordan Luplow belted a homer to lead off the 10th inning to lift host Cleveland to a victory over Minnesota.

Luplow’s blast made a winner out of Emmanuel Clase (2-1), who struck out one batter in a spotless 10th inning for the Indians. Jose Ramirez launched a home run in the win.

Brent Rooker belted a solo homer in the second inning, and Luis Arraez and Jorge Polanco each drove in a run for the Twins, who have lost three in a row and 12 of 14 overall.

Zack Wheeler (2-2) held the Cardinals to one hit in eight-plus innings. He allowed the one run and struck out nine batters. Hector Neris relieved him in the ninth inning to earn his fourth save.

Jose Altuve returned from a 10-game hiatus with three hits and Houston won the opener of its four-game series against visiting Seattle.

Altuve, who last played April 13 before testing positive for COVID-19, finished 3-for-5 with a run scored and two RBIs. He added his first stolen base of the season and reprised his role as a catalyst atop the lineup for the Astros, who improved to 4-1 on their eight-game homestand.

Despite the offense, Houston finished 3-for-12 with runners in scoring position and stranded eight.